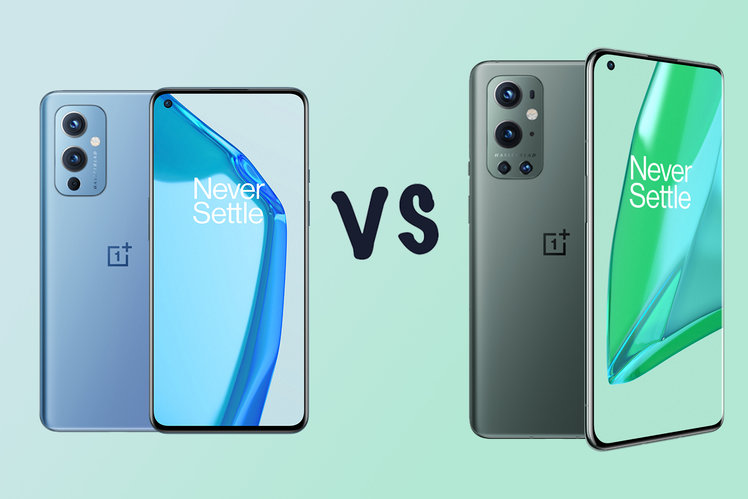 But exactly how do they compare? We’ve spent some time testing the OnePlus 9 Pro and OnePlus 9 to see what they’re like as well as looking into details of the OnePlus 9R to see how they stack up against each other.

You can also read our separate feature to see how the OnePlus 9 series compares to Samsung’s Galaxy S21.

What that means in daily use is that while the 9 Pro is bigger than the regular OnePlus 9, it feels more comfortable to hold in one hand. Those curves add the illusion of slimness. The plastic frame also means the regular model feels a bit less premium.

On the flip side, having a flatter display on the regular model means it’s a bit easier to use in some situations because you don’t need to worry about accidental touches while gaming or using the camera.

All three come with a punch hole front camera positioned in the left corner of their displays, while a rectangular camera housing – like the OnePlus 8T and OnePlus Nord – are on the rear.

Two lenses are larger on the rear camera for all three OnePlus 9 devices. Each with metal rings around them to give them a purposeful look. The standard OnePlus 9 has a triple rear camera, while the OnePlus 9 Pro and OnePlus 9R have a quad rear camera, though with different lenses, as we talk about further down.

OnePlus 9 Pro also features IP68 water and dust resistance. The other two models do not offer an official waterproofing rating.

The OnePlus 9 Pro, OnePlus 9 and 9R offer a peak brightness of 1300nits and support for HDR10+, like the OnePlus 8T. As mentioned, the OnePlus 9 Pro sports a curved display, while the 9 and 9R have flat displays. All three devices have under-display fingerprint sensors.

When you put the Pro and regular model side-by-side, you do notice a difference in sharpness if you look closely. The Pro is definitely the one with a crisper panel. However, they’re very similar when it comes to colour balance and brightness. The non-Pro does have a habit of crushing blacks a bit to make the screen feel a bit too contrasty at times.

Both Pro and regular models feel as fast and responsive as each other in daily use, so you’ll never have to worry about games or apps taking ages to load, or animations on the screens responding slowly to gestures.

Real life battery longevity is similar too, with both the Pro and regular models easily making it through a day, even with 3-4 hours of screen time. Both phones would often get to bed time with between 30-40 per cent spare.

The OnePlus 9 Pro, OnePlus 9 and OnePlus 9R have 4500mAh battery capacities and all three support 65W fast charging. Wireless charging is also supported on the 9 and 9 Pro, though only 15W on the 9 and 50W in the Pro. It isn’t offered on the 9R.

That speedy charging means battery anxiety never happens with the 9 and 9 Pro. When the battery empties on either you only need to plug it in for half an hour and it’s fully charged again.

The OnePlus 9 Pro offers a quad rear camera, while the OnePlus 9 has at triple rear camera. Both have the Hasselblad partnership, which involves colour tuning and sensor calibration.

The OnePlus 9 Pro also offers a 48-megapixel main sensor with f/1.8 aperture but it’s a custom Sony IMX789 sensor and it supports optical image stabilisation (OIS), while the 9 has a Sony IMX689 sensor and no OIS. A 50-megapixel ultra wide sensor is also on board the 9 Pro, along with a 2-megapixel monochrome sensor, but it also adds an 8-megapixel telephoto sensor with f/2.4 aperture.

In daily experience – when it played nice – the Pro had the better cameras, but results were so inconsistent it wasn’t always great. The colour balance between the ultrawide and primary lenses didn’t always match well at all, while the zoom camera delivered mushy shots lacking in detail even at its lowest zoom setting.

The two main cameras on the OnePlus 9 were much more aligned when it came to colour reproduction and the 2x digital zoom on the main camera was more reliable.

The OnePlus 9R also has a quad camera, like the 9 Pro, but it has the same specs as the OnePlus 8T. That means there’s a 48-megapixel main camera, 16-megapixel ultra wide angle camera, 5-megapixel macro camera and 2-megapixel monochrome lens.

As mentioned, all three OnePlus 9 devices have a punch hole front camera. The 9 and 9 Pro have a 16-megapixel snapper on the front.

The OnePlus 9R will be available in India only, from the beginning of April. It will cost 39,999 rupees, which is around £390.

When you consider the camera performance and how many important features are just as good on the regular OnePlus 9, it doesn’t seem wise to spend the extra. At least, not until the company solves its camera problems.

The OnePlus 9R is only available in India, but it offers the same display and battery as the regular OnePlus 9. It doesn’t have the Hasselblad partnership and it has a slightly lower processor, but otherwise it offers some great specs under its hood for the price.