OnePlus phones, to date, have been among the best performing machines in their price range, thanks to flagship chipsets, top-class storage, and RAM modules. Where they have lacked, however, is the camera experience. The company looks to fix this with a three-year partnership with Swedish camera firm, Hasselblad, starting with the OnePlus 9 series.

With the OnePlus 9, the company has tried to provide its users with a lot of premium features like the Qualcomm Snapdragon 888 SoC, a 120Hz refresh rate display, a Hasselblad tuned camera unit and more. But at the same time, it has missed out on a few features that I would have preferred to have at such a price point, like a metal frame, wireless charging and more.

Is the OnePlus 9 really worth it? Should you be paying this much for the smartphone? We will get to all of that further in our review, but let’s first take a quick look at what’s new.

OnePlus 9 review: What’s new and is it worth it?

This is the first OnePlus flagship series smartphone which features a plastic frame instead of an aluminium one, the latter being much more sturdy. Plastic is lighter than metal, which could be the reason for the company to shift to plastic. However, I would rather have a heavier device and have peace of mind rather than have a lighter phone and be worried about its build quality. 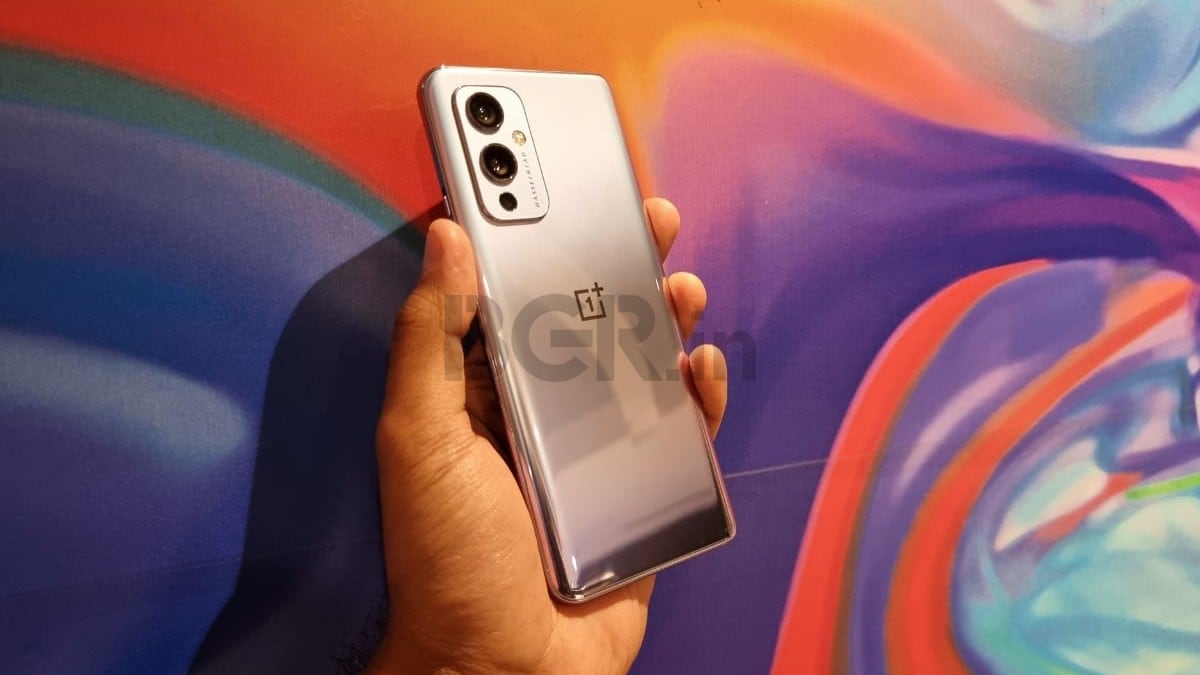 This time, instead of partnering with a movie franchise or a car company, the company has decided to partner with Hasselblad to help improve its camera performance. However, I am still not impressed with the camera performance. I think that the company still needs to work on its image processing software, as the lenses and the image sensors being used are of top quality. The company can fix the issue with an OTA update at a later date.

The OnePlus 9 in terms of looks does not stand out from the crowd; it has a basic look. The only thing that is a bit different is the Hasselblad branding on the Samsung esque camera module. The back panel is made out of 3D Corning Gorilla Glass, but it feels quite brittle, which will easily break if dropped. The plastic frame according to me will also be of no help considering it will also take visible damage.

From the front, the display looks pretty similar to the last-gen OnePlus 8T. I would have preferred a curved display similar to the 9 Pro, which makes the phone feel much more premium and makes the viewing experience a bit more seamless. 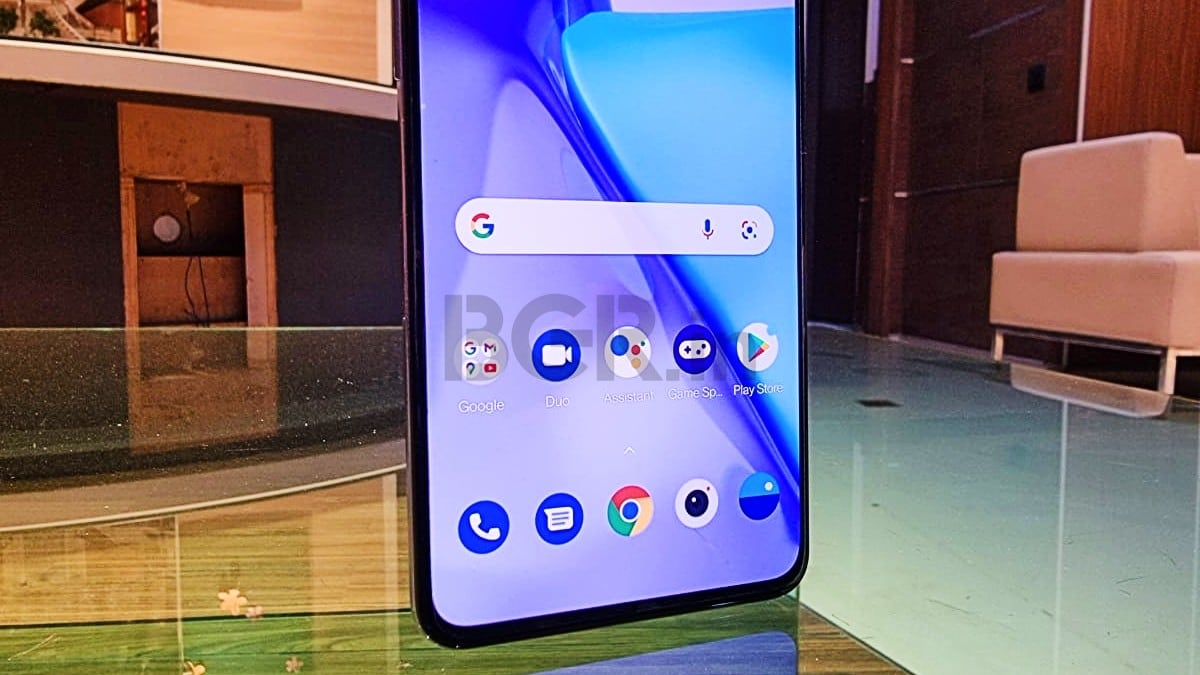 The device when held feels easily manageable, but its build quality does not bring confidence while using it. The back panel, even though it feels weak, does have a grained-up paint job that when seen closely looks like straight brush strokes.

Another small disappointment for me is that the device still doesn’t have an official IP rating.

Overall, all other design cues apart from the camera module and the plastic frame remain similar to the OnePlus 8T.

The display used on the OnePlus 9 features all the same specifications as the OnePlus 8T. The company could have saved on development cost and used the same display, thinking not to fix what is not broken.

OnePlus 9 features a 6.55-inch full HD+ display with a resolution of 2400 x 1080 pixels and brightness of 1,100 nits. The display also comes with HDR10+ certification. Due to this, while watching compatible content, the brightness and colour saturation automatically get a boost. 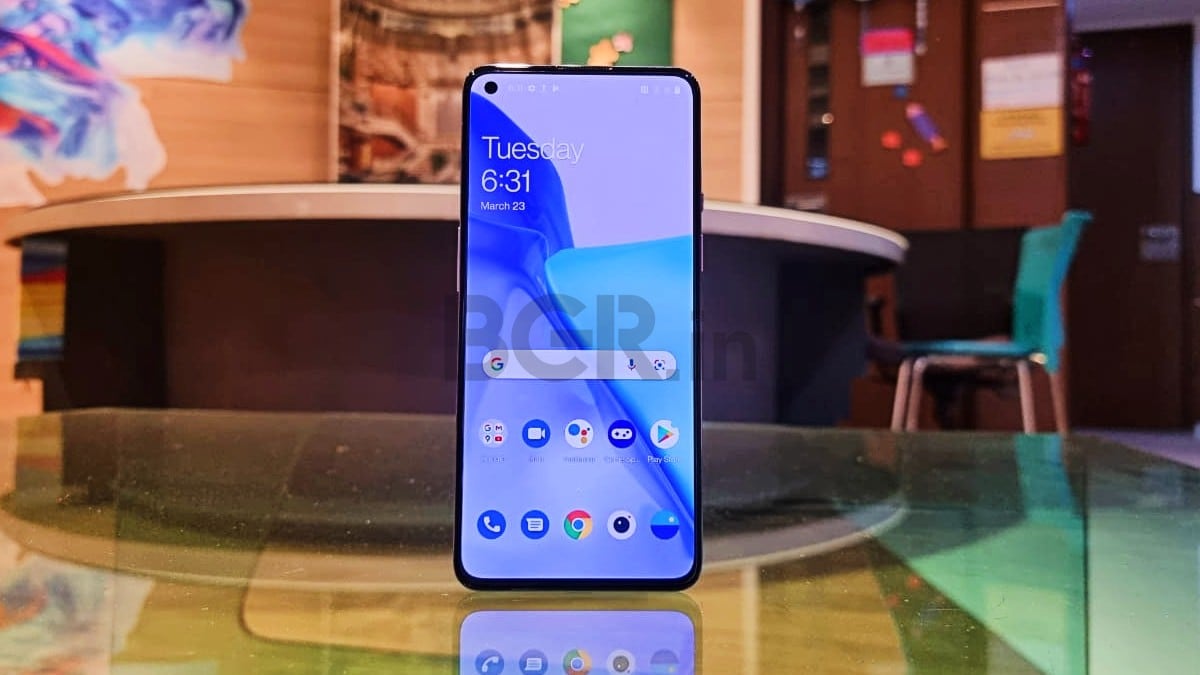 The display even while browsing through the UI or playing games looks superb, with punchy colours and great viewing angles. The brightness levels also seem perfect with the display being easily legible under direct sunlight and getting dim enough to not hurt your eyes in complete darkness. The phone also comes with a lot of options to calibrate the display to your liking.

One thing to keep in mind is that the hole punch cutout is a bit irritating as some apps cut out the area with a black bar, which hinders the viewing experience a bit. I would love for OnePlus to go a step back to the 7 Pro series and bring back the pop-up camera module for a coherent viewing experience.

Performance is an area where OnePlus phones shine the best, and OnePlus 9 is no anomaly. Keep in mind, I am not comparing the device to the insanely powered Asus ROG Phone 5 with up to 18GB of RAM.

In daily use, I saw no slowdowns or stuttering on the device. It was able to easily go through anything that I had to throw at its side. During my usage, none of the apps that I use on a daily basis felt sluggish or were kicked out of memory.

The device with the help of its Game Space will be able to provide you with stable framerates during long gaming sessions. However, during such long gaming sessions, the device will surely get warm to the touch. And if you keep on exploiting the device it will raise the temperatures even more till a point when you will have to put it aside to let it cool down. 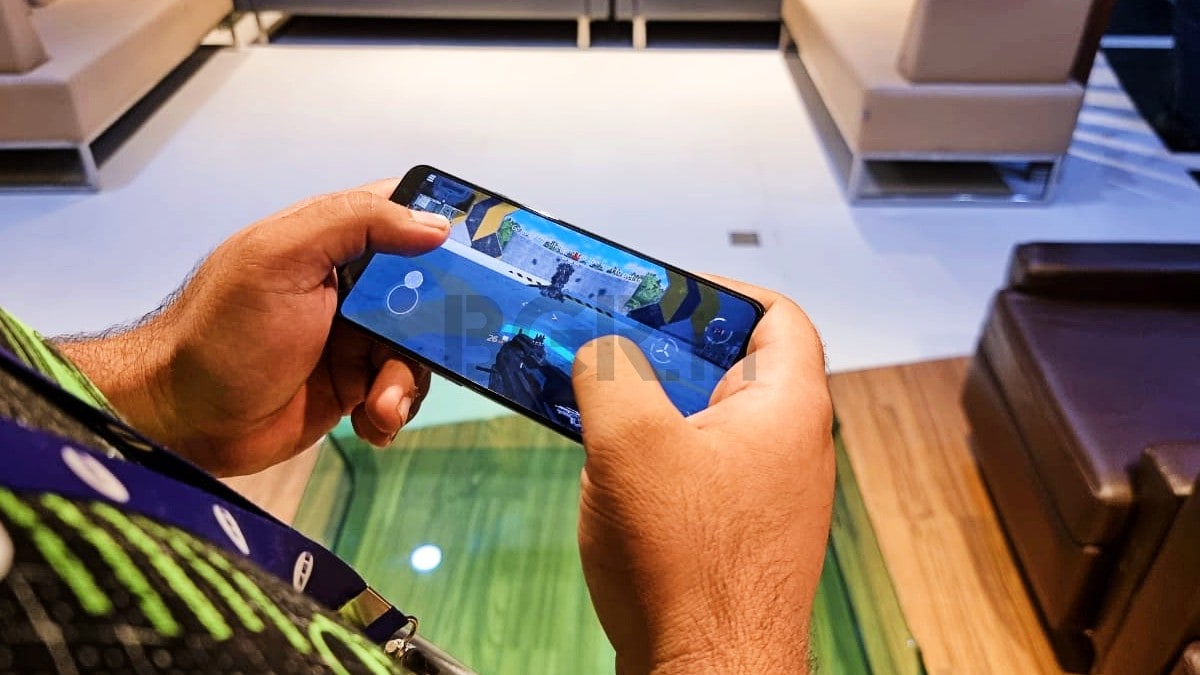 Taking the usage to the next step, I played multiple games on the device including Call of Duty: Mobile, Garena Free Fire, Asphalt 9: Legends and more. During extended gameplay, I did not suffer from any sort of frame drops or lags. The vibration feedback was ample, but nothing out of the ordinary, so was the sound.

The device was able to handle all sorts of games with ease. There wasn’t even a single frame drop even after an hour and a half of extensive gaming.

Now for heavy usage testing, I opened around 40 tabs in Chrome and started switching between them, and as expected, the phone was easily able to cope with no lag. None of my tabs got killed off while doing so. Taking it a step further, I performed our multi-app test along with the multi-tab test, where I opened 23 apps and kept switching between them while at the same time switching between 40 tabs each on three web browsers, which was also handled by the device easily, without it killing of any of the apps or tabs.

Overall, in day-to-day usage, you will not face any problems with the device and it will hold its own with daily tasks even if you like to play resource-intensive games and do not like to kill off any of your apps.

Note, I had to format the device three times while testing, due to software bugs. However, this could just be because our review unit was running pre-production software.

OxygenOS has been one of my favourite Android skin for some time, but with OxygenOS 11, the company has left behind the stock-looking skin. Instead, the skin now seems to be inspired by Samsung’s One UI, which on its own is a pretty robust skin. However, the overall appeal of OxygenOS is now lost for me.

The company launched the new skin alongside last year’s OnePlus 8T. Since then, I have not noticed any major differences in the UI. The Dark Mode is still pretty good with the new always on display introduced with the skin being peppy as always. 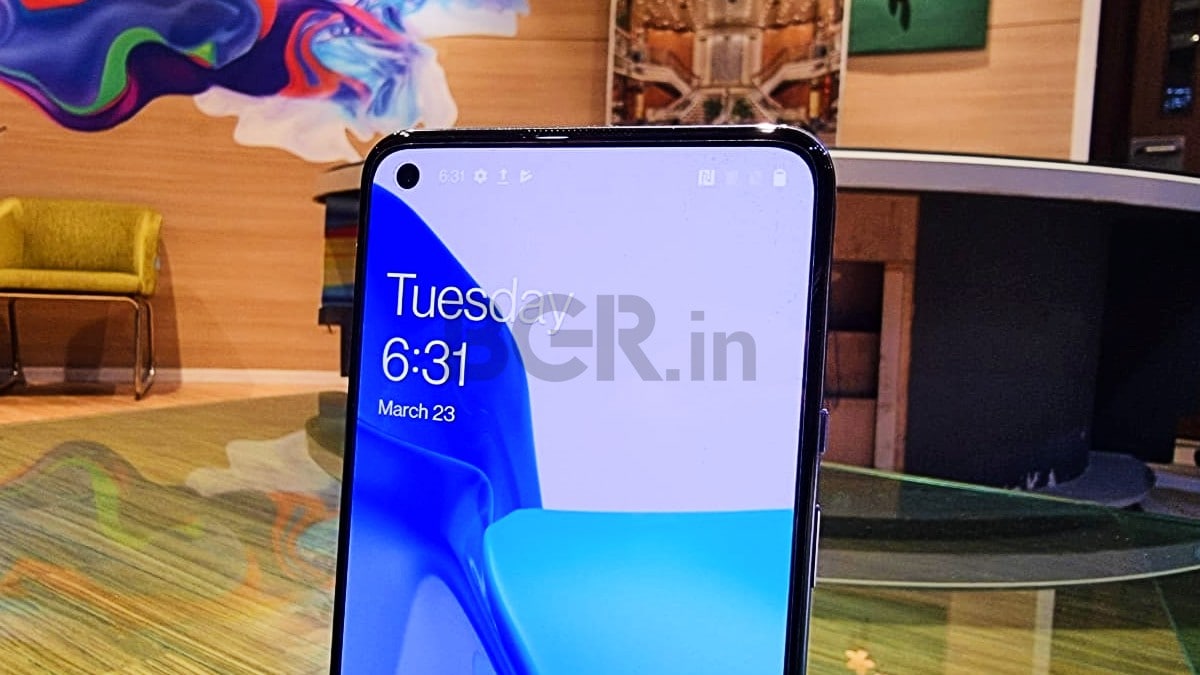 Overall, OxygenOS 11 is pretty easy to navigate and get used to for most people. You will not face any issues in using the skin.

OnePlus has never been a great performer when it comes to cameras. However, with the 9 series, the company is looking to change this with its three-year partnership with Swedish camera brand, Hasselblad. This is not the first time Hasselblad has partnered with a phone brand, earlier, it partnered with Motorola to make a zoom camera mod for its semi-modular Moto Z smartphone.

All of the specifications aside, I personally did not like the camera performance much. The images were not up to the mark of a flagship smartphone, leave aside a Hasselblad camera. 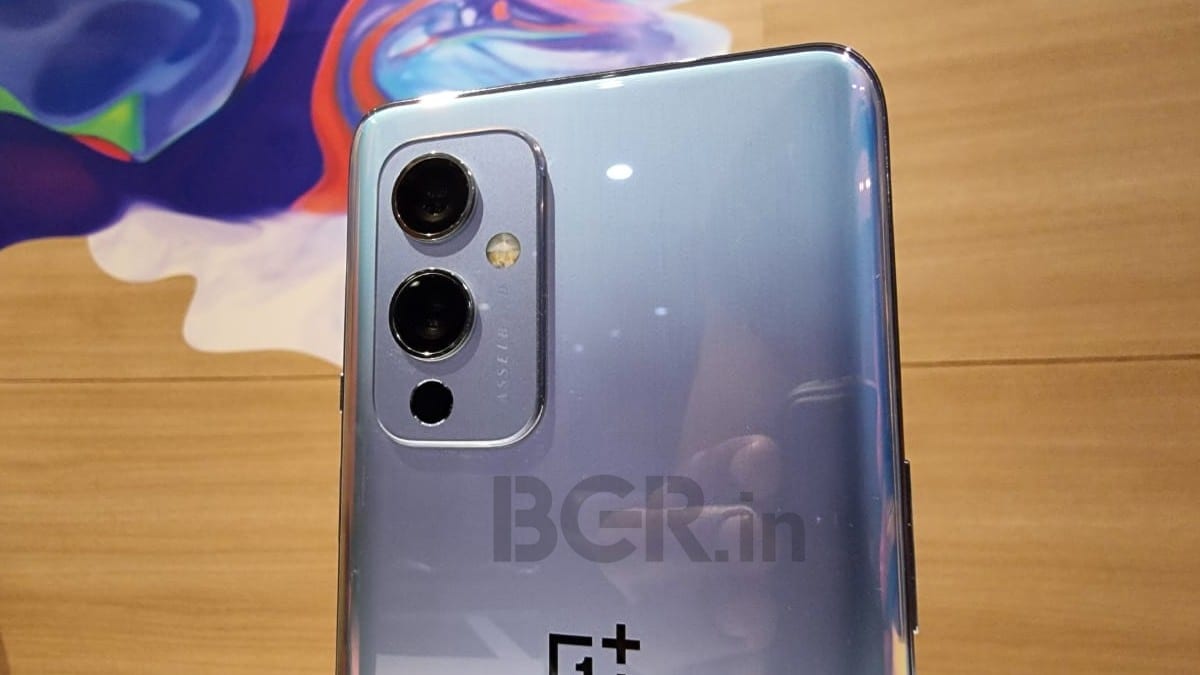 Images taken with the primary camera in bright light came out punchy and oversaturated. The camera was not even able to catch the colours properly, with it turning orange to yellow, dull red to a bright red and more. Some images were coming too much oversaturated, that they were unusable. Sometimes with a lot of trial and error, the phone did manage to capture good shots with a lot of detail in the shots. However, a normal user will not be putting in so much effort to get just one shot.

Unless you are into black-and-white photography there is not much use of the monochrome camera.

Clicking close up shots with the device was also a nightmare because it was not able to focus on the object at all. Details were lost in such shots and the images had a lot of blur making them unusable. The 10x zoom mode also did not capture any details, with the images coming out too blurry. 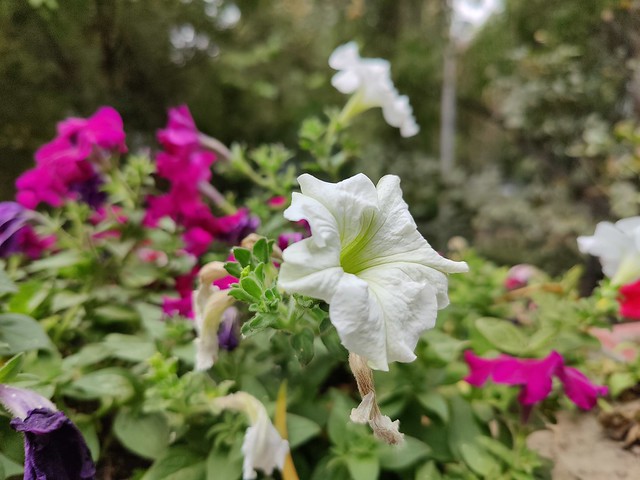 The wide angle camera was also not a stunner, with the image colours coming out oversaturated and there being a lot of blur and grain in the photos.

The Pro mode, which comes with customisations from Hasselblad, also was not up to the point. Leaving a lot to be desired. The images clicked were similar to the images clicked in the normal mode, and the custom controls were also not of much use.

Coming to the low light performance of the device, the images clicked came out grainy and blurred. These also featured oversaturated colours and artificial brightening of the subjects I was trying to shoot. The Nightscape mode did help with lowering the image grain but the results were almost similar.

Daylight selfies were decent, but the device’s algorithm was artificially brightening the image and smoothening the subject, making it as if the images were being clicked with the beauty mode turned on, even when it was turned down to zero. The colours were oversaturated just like the primary camera. Low light selfies were no better with the addition of grain to the images.

Overall, I personally think that the Hasselblad partnership has brought nothing special to the table in terms of camera performance, and that OnePlus could do all of this on its own also. However, take note that the company could improve all of this with OTA updates. But as of now, the camera performance is not impressive and if this is the reason you were looking to buy the OnePlus 9, I would recommend that you look at other competitors in the same price range.

OnePlus 9 also features a 4,500mAh battery, similar to its predecessor, with support for 65W Warp charging technology. Battery life was pretty good, with the phone easily managing to last me around a day and a half on a single charge cycle with moderate use, which included a bit of gaming, browsing social media apps, receiving calls, sending text messages, watching a few shows and more. While with heavy usage, which included extended heavy gaming, watching a few Netflix movies and more, the device managed to last me for around 12 hours on a single charge. 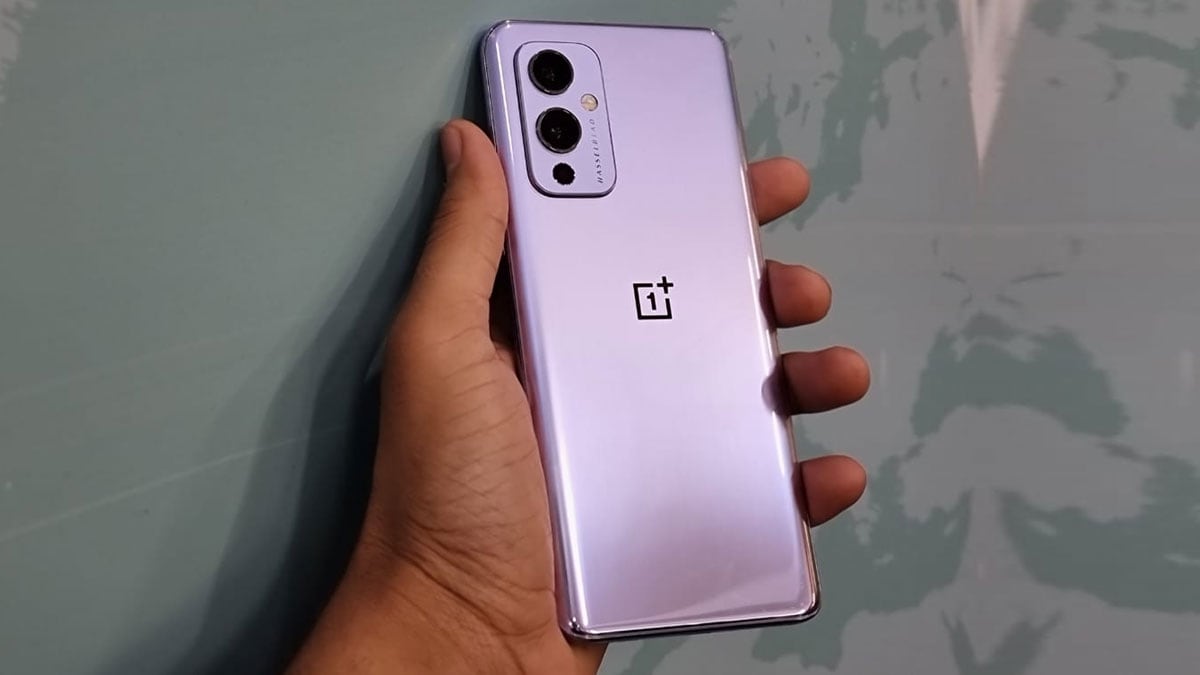 Overall, I did not like the OnePlus 9 a lot. It does come with its pros, which include a good display, great performance and more. But, the cons like the plastic build quality, the sub-par camera performance and more heavily overweigh the pros of the device. If you are looking to purchase this device, I would recommend that you look at other options like the Samsung Galaxy S20, Apple iPhone 11 and more.