OnePlus has built quite a name for itself for offering top of the line specs at a price of a mid-budget smartphone. Over the years, the company has taken its flagship series into the ultra premium segment while introducing new series for mid-budget and premium buyers and loyalists have gladly followed it everywhere. Keeping up with its trend, OnePlus introduced the OnePlus 9RT in India recently at a starting price of Rs 42,999.

A slightly bigger display, an upgraded processor, and a tiny bump in camera details later, the OnePlus 9RT might seem like a worthy upgrade to the OnePlus 9R, especially in 2022, but it isn’t. But for all those who are using older generations of OnePlus smartphones, the OnePlus 9RT is an option to consider, especially since it features everything the flagship series has. Well, almost everything.

That said, the question remains – should you upgrade to the OnePlus 9RT or not? We will try to answer that and more in the review below. So, keep reading…

Let’s start with the design.

The OnePlus 9RT measures 16.22×7.46×0.829cm and weighs 198.5g. With those dimensions, it is slightly bigger than the OnePlus 9R that measures 16.07×7.41×0.84cm and weighs 189g. While the OnePlus 9RT seems heavier on paper, it doesn’t feel as heavy in usage, especially if you take off the silicon cover that ships inside the box. Put the cover on and suddenly start feeling the weight of all that machinery drooping down in your pocket. 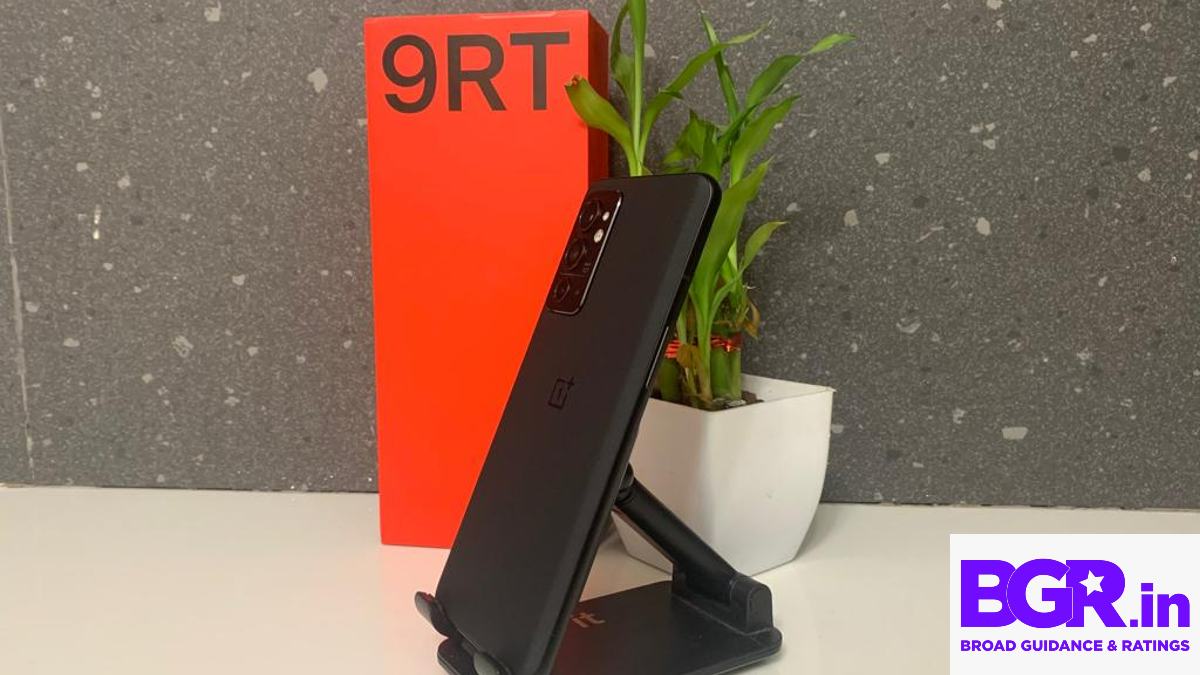 Dimensions aside, the OnePlus 9RT is a gorgeous smartphone. It ships in hacker black and glossier nano silver colour variants and it has a glass back with matte finish and an aluminum chassis. The hacker black variant that I used for this review has a nice shimmer to it at the back, which turns an otherwise boring colour into something really impressive. Aside from the glass back, the phone has a triple camera setup that is placed in a vertically placed camera setup that is stacked towards the left side of the back, which is slightly different and might I add, better, from what we saw in the case of the OnePlus 9R. On the right you get the power button and on the left are the volume rockers. And at the bottom, you get the SIM card tray, USB Type-C slot and the speaker grille.

Overall, the OnePlus 9RT looks good and it feels equally good, even when using it with a single hand. What adds to the overall allure is the fact that for most parts the back remains smudge free.

The display of the phone follows the suit. The OnePlus 9RT sports a 6.62-inch fluid AMOLED display with a 120Hz screen refresh rate, a 600Hz touch sampling rate, a resolution of 1080×2400 pixels and Gorilla Glass protection. Details aside, the display of the phone is well lit and comfortable to read even in the bright sunlight. The colours are bright but a tad bit saturated. While that does not make a world of difference, it is certainly visible, especially if you have used OnePlus smartphones in the past. That said, the OnePlus 9RT does make up for a very comfortable video viewing experience. I have binged on a lot of shows lately and I was pleased by the clarity that it offers. Also, it was able to detect HDR videos on OTT apps such as Netflix quite easily, all of which made up for a great experience. 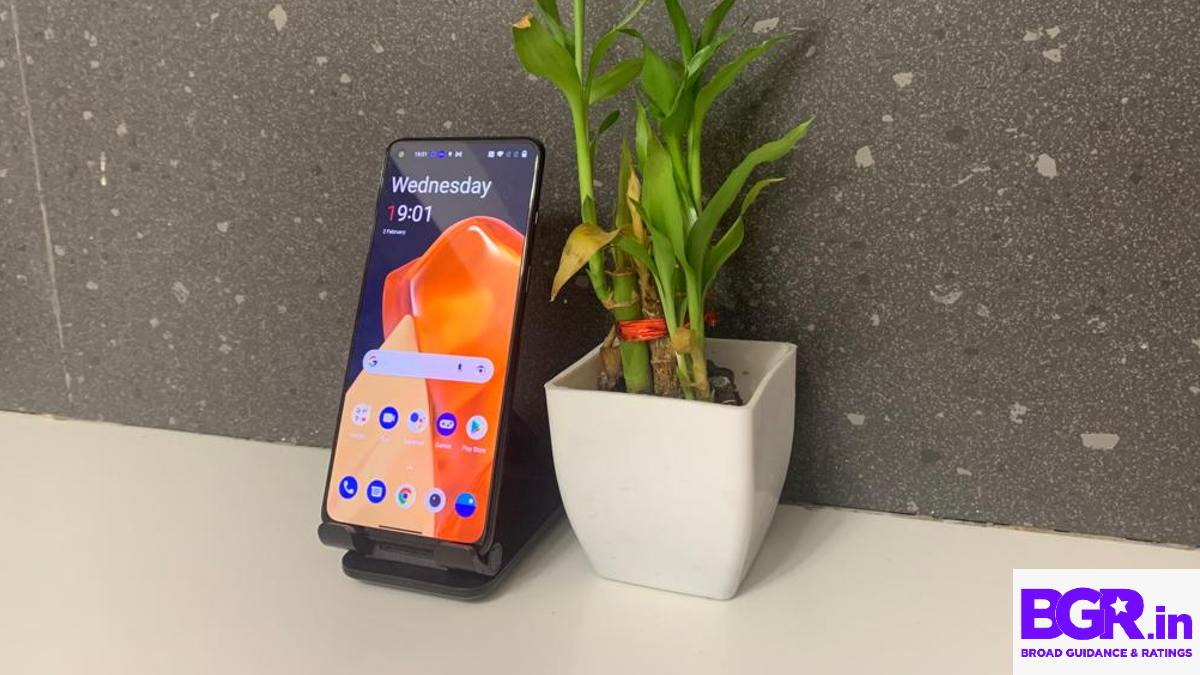 Additionally, the in-display fingerprint sensor does its job of unlocking the phone splendidly. It snaps open the phone within seconds and the phone offers decent haptics, which makes the overall experience seamless and comfortable. One downside, however, is the missing IP rating – which is a standard on most mid-budget and premium smartphones these days.

Coming to the performance, the OnePlus 9RT is powered by the Qualcomm Snapdragon 888 processor that is coupled with up to 12GB of LPDDR5 RAM and up to 256GB of UFS 3.1 storage.

In experience, the OnePlus 9RT is quite dependable, especially in day-to-day usage and it handles everything that you throw at it with ease. Be it multitasking with apps on a busy work day, which for me mostly includes a bunch of emailing apps, messaging apps, social media apps and the calling bulkload, or binge watching series and movies on OTT services such as Netflix and Disney+ Hotstar (did someone mention The Eternals?) over a weekend, the OnePlus 9RT threw no tantrum whatsoever. Its gaming performance was equally adequate. It handled games like Subway Surfer and BGMI quite well. For most parts, the vapour cooling chamber kept the cool even during peak load and prolonged usage. The back of the phone got slightly warm on prolonged usage, but the phone handled that with ease. 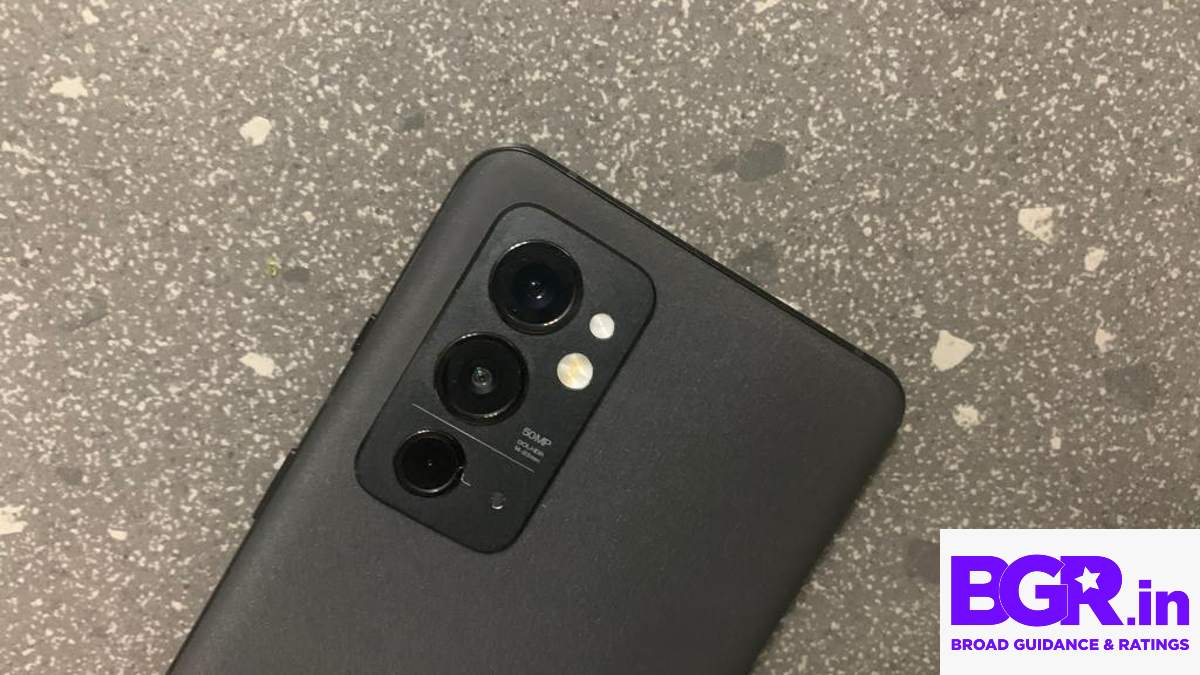 Coming to the software, the OnePlus 9RT runs on Android 11-based OxygenOS 11.3, which is quite a bummer especially for a smartphone shipping in 2022. It would have been great if the phone ran the Android 12 OS but that update is still under development and there is no telling when it will arrive. Until that happens, you will get an experience that is quite similar to what you have experienced in older OnePlus smartphones, that is, if you have used one before.

That said, OxygenOS 11.3 that you get in the phone right now is well optimised to the tune of the Snapdragon 888 SoC. It runs smoothly and I did not encounter any bugs or issues while using the device. The phone does have some bloatware but OnePlus has managed to keep that to a bare minimum, which certainly helps with the overall experience.

Now let’s talk about the cameras. 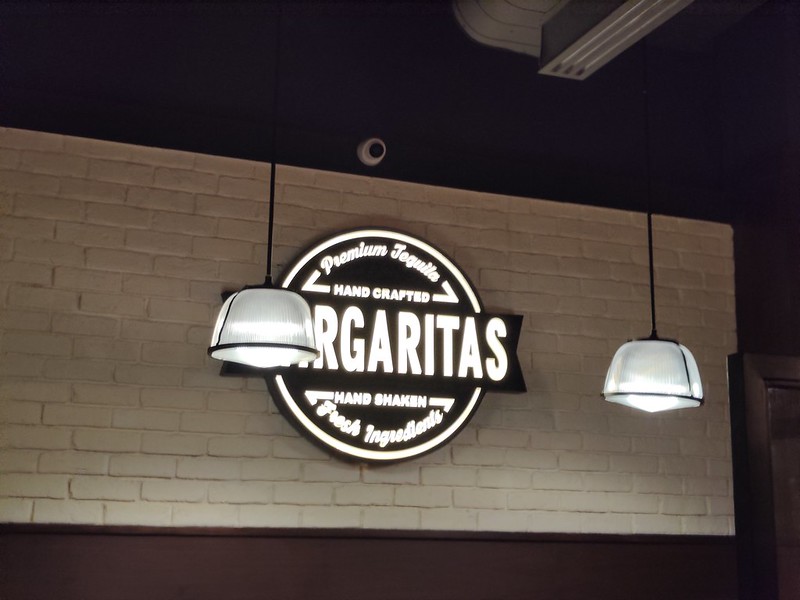 Details aside, the OnePlus 9RT offers a mixed bag of camera performance when it comes to clicking images with the rear camera. But one place where it does not falter at all is clarity. Be it the indoor lighting conditions or the bright daylight outside, the phone captures every detail of the subject with precision. And zooming in on the image tells you or while capturing images using the macro camera shows you the amount of details that the phone manages to capture, which is quite splendid. But it has its hits and misses. It tends to follow a similar trend while capturing shadows especially when there is adequate light. 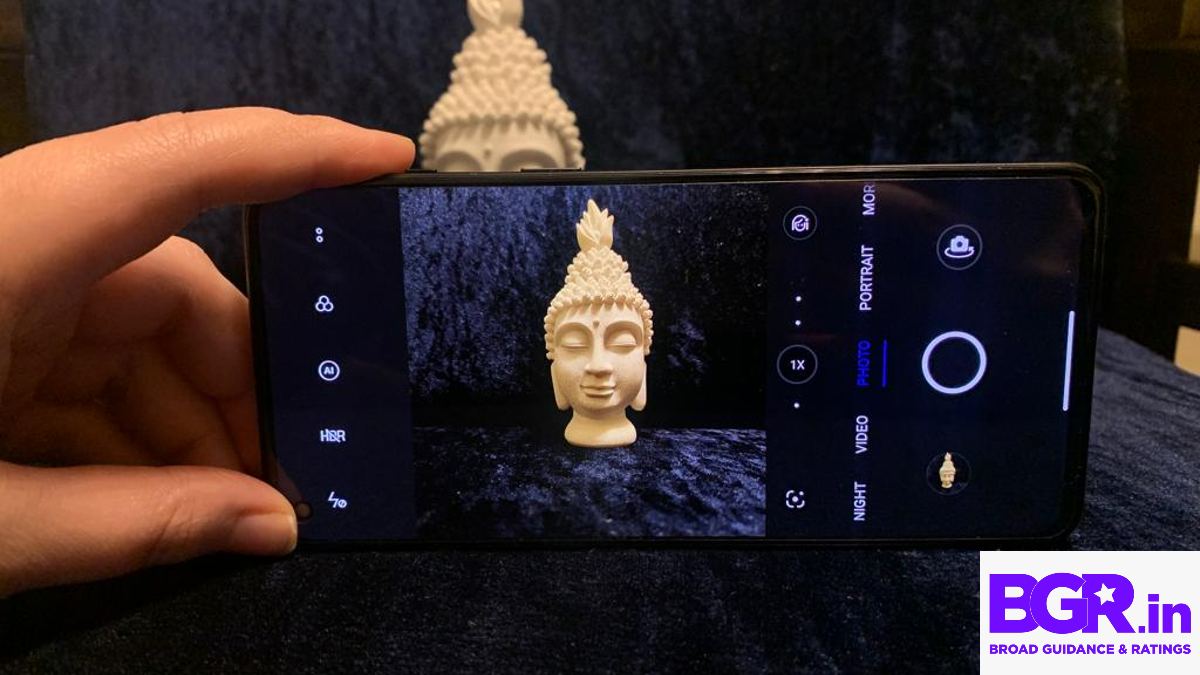 The selfie camera is no different. The images captured in bright outdoor light have depth and clarity. However, the phone tends to fail in both these departments in low light and indoor light conditions. Though the colour reproduction remains accurate.

Last but not the least, the battery.

The OnePlus 9RT comes with a 4,500mAh dual cell battery, which is what you get in all OnePlus 9 smartphone models. The part where this phone distinguishes itself from the rest of the series, or at least some of the models in the series is in terms of the charging technology. The OnePlus 9RT ships with a Warp Charge 65T charger. It is the same charger that you get with the OnePlus 9 Pro smartphone.

In usage, the OnePlus 9RT features an internal throttle that prevents the phone from operating in high performance mode all the time. You will have to manually turn on the high performance mode to get the best out of the phone or while playing high intensity games. But that will drain down the battery quite fast. For all other times, the phone lasted for a day for me on a busy work day with an average of around 5-6 hours of screen time, which is pretty decent if not exceptional.

On the charging part, the OnePlus 9RT charges completely in around 30 minutes and even 10 minutes of charge will give you enough juice that will last through a long evening.

Should you buy the OnePlus 9RT 5G or not?

Now the million dollar question – Is the OnePlus 9RT worth buying or not?

In one word, it is. The OnePlus 9RT is a beautifully sculpted phone that offers a well lit display, powerful performance, decent camera performance and battery life and fast charging technology. Simply said, the OnePlus 9RT is a great phone, especially for gamers who are looking for top of the line features from last year and OnePlus loyalists who are upgrading from an older model.