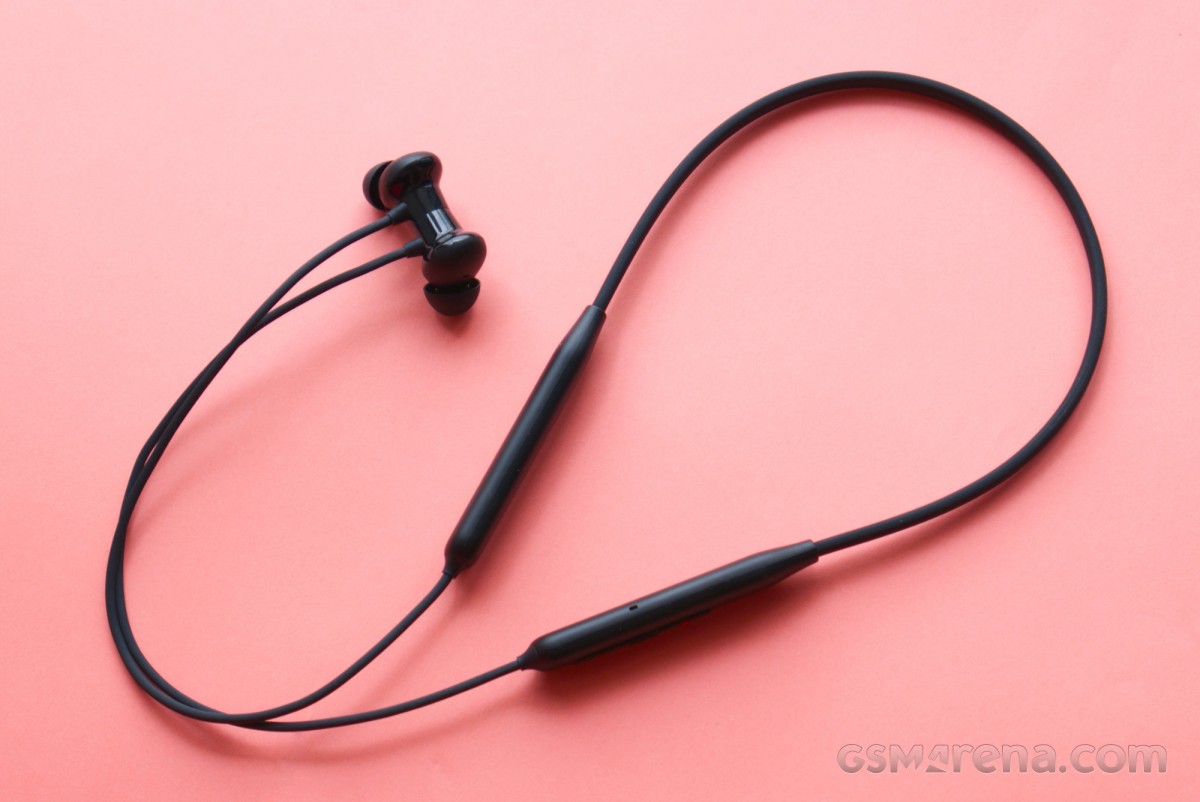 The left column houses the controls for volume and media playback. The middle button is a bit overworked here; you can press it once to play/pause your music or answer/end your calls. Press it twice to skip to the next song and thrice to go back to the previous one. Press and hold the button to initiate pairing. 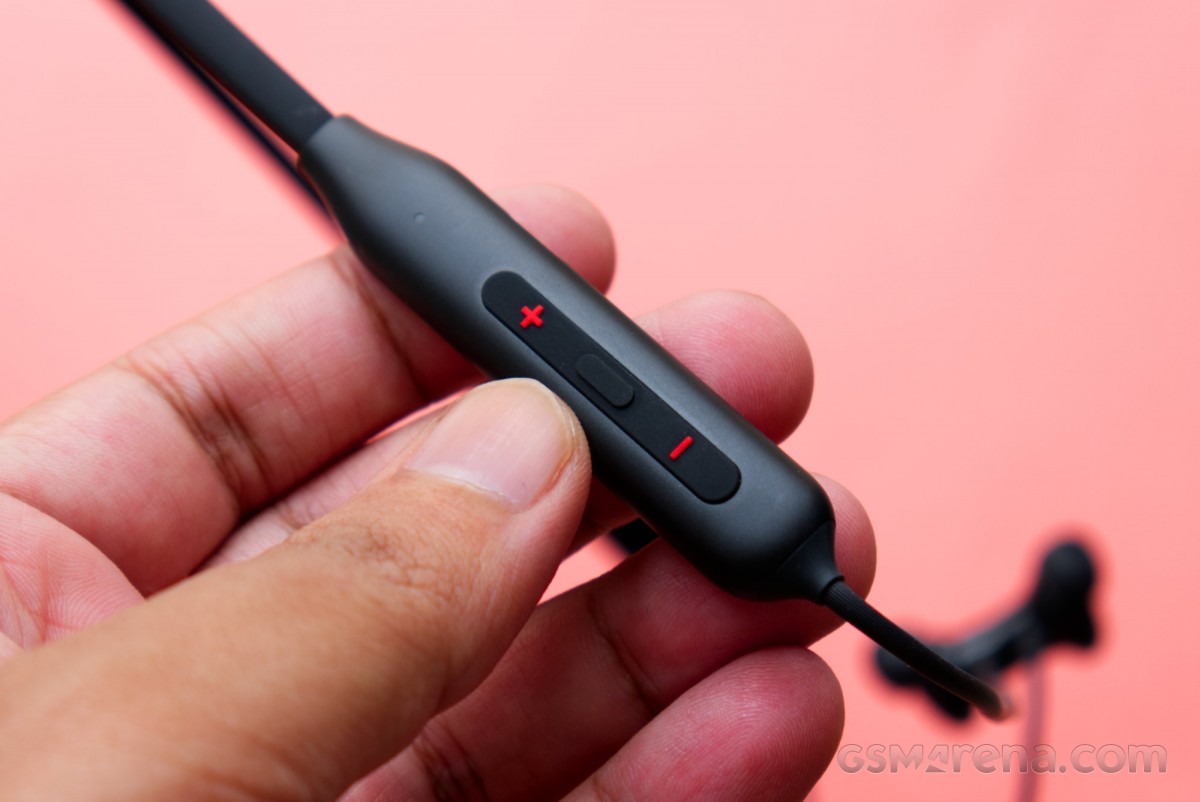 The buttons have a nice clicky feel and work reliably. However, they are a bit too far apart, so you have to hunt around for them before you find the one you are looking for. Even if your thumb does land on a button, it’s difficult to tell which one it is without sliding it up and down to place it among the trio. It would have been better if all three buttons had fit within the width of the thumb.

The chunky design of the Bullets Wireless Z2 can be a bit irritating. It’s not particularly large but still feels like it takes up too much space around your neck. It’s also one of the heavier models I’ve used and I can always feel its presence around my neck. 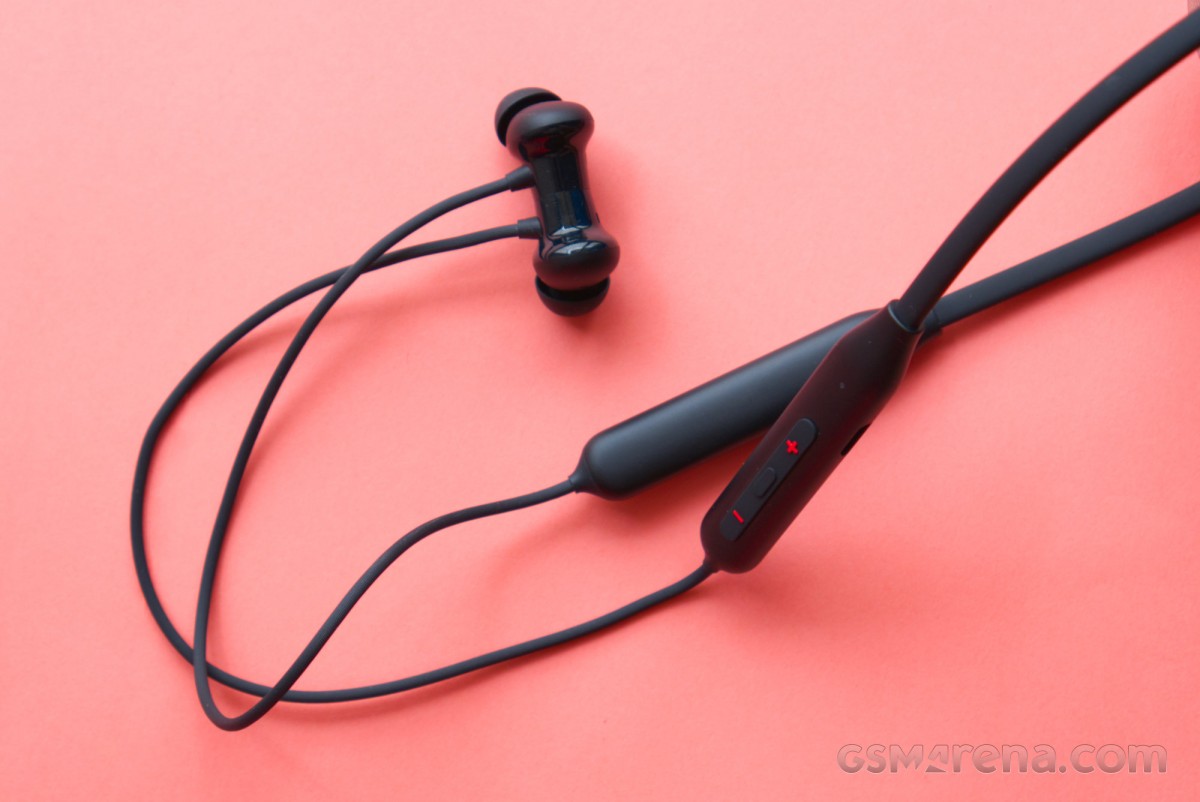 The build quality and finish of the headset is very good. The rubber feels pliant and durable, and the plastics all have a quality feel. The rubber for the cables is also striated. The headset is also IP55 rated, so it can survive being splashed with water.

The Bullets Wireless Z2 is a comfortable headset. The ear tips are made out of soft rubber and have the oval design found on the OnePlus Buds Pro and Buds Z2. They fit the ears well and can stay there for hours without being uncomfortable. 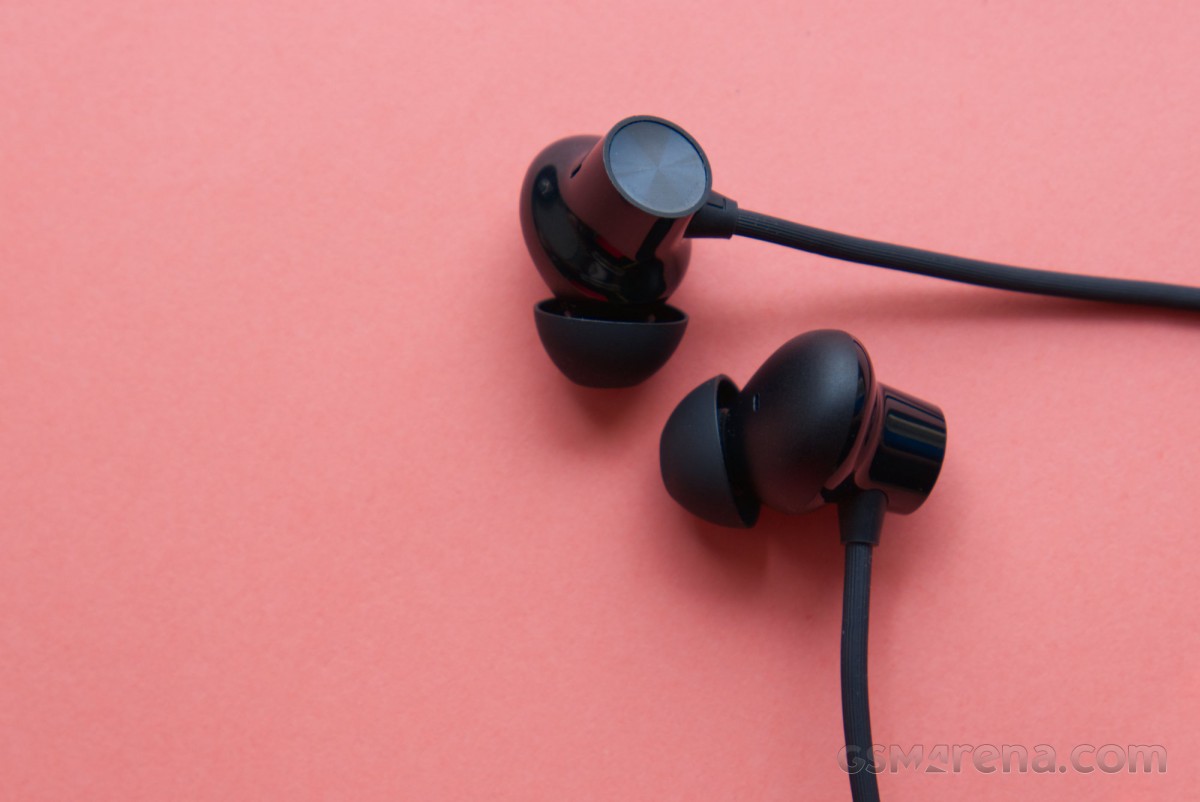 As mentioned before, the only annoyance is the neckband hanging around your neck, which is just a tad thicker and heavier than it should have been.

The Bullets Wireless Z2 do not have a dedicated companion software. On OnePlus phones, you do get a dedicated info screen for them but there’s nothing here to adjust. Also, even though you can see the firmware version here, there isn’t any way to actually update it.

The Bullets Wireless Z2 have relatively large 12.4mm drivers. They connect over Bluetooth 5.0 and support SBC and AAC codecs.

The tonality of the sound is similar to OnePlus’ recent products, with neutral-leaning mids and treble and over-the-top bass. 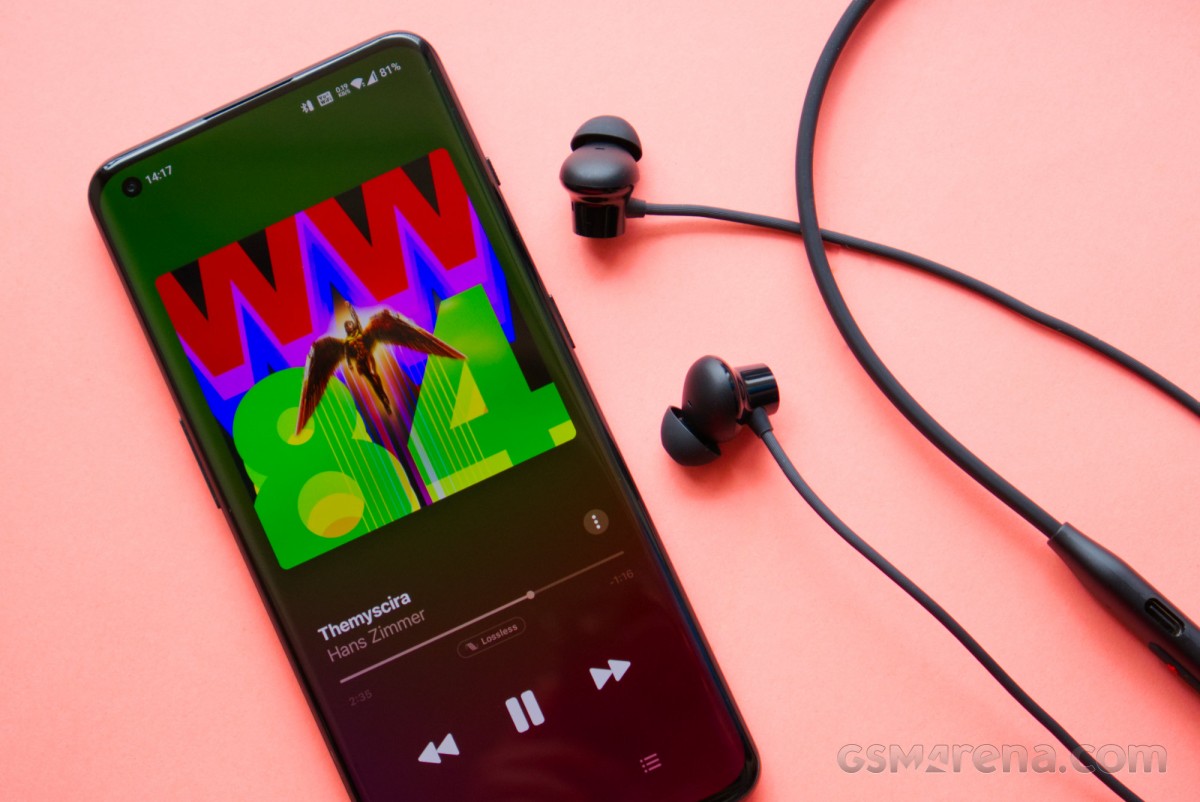 The bass response on the Bullets Wireless Z2 is garish. It has an exaggerated upper and mid-bass response, which can be overbearing. The bass is tolerable when listening at lower volumes but becomes genuinely fatiguing at higher volumes, not to mention obnoxious and overpowering over the rest of the frequency response.

It’s not that this doesn’t work for some tracks or genres. Indeed, some music can sound significantly more exciting when you throw this much bass at it. But sometimes you just want to lie down and listen to some relaxing tunes or a podcast, which can be difficult to do when the speakers are constantly in party mode.

This is a shame because the mid-range is actually quite good. Vocals have a smooth and mellow timbre that’s very pleasing to listen to. Instruments have a similarly pleasant tonality to them, with everything from the piano to the guitar coming through quite well.

To top it off, the treble performance is great as well. It shares some of the mellowness of the mid-range so there’s no unwanted harshness or sibilance at the cost of some air and brilliance. However, it still comes across as detailed and articulate without being dark or muddy. 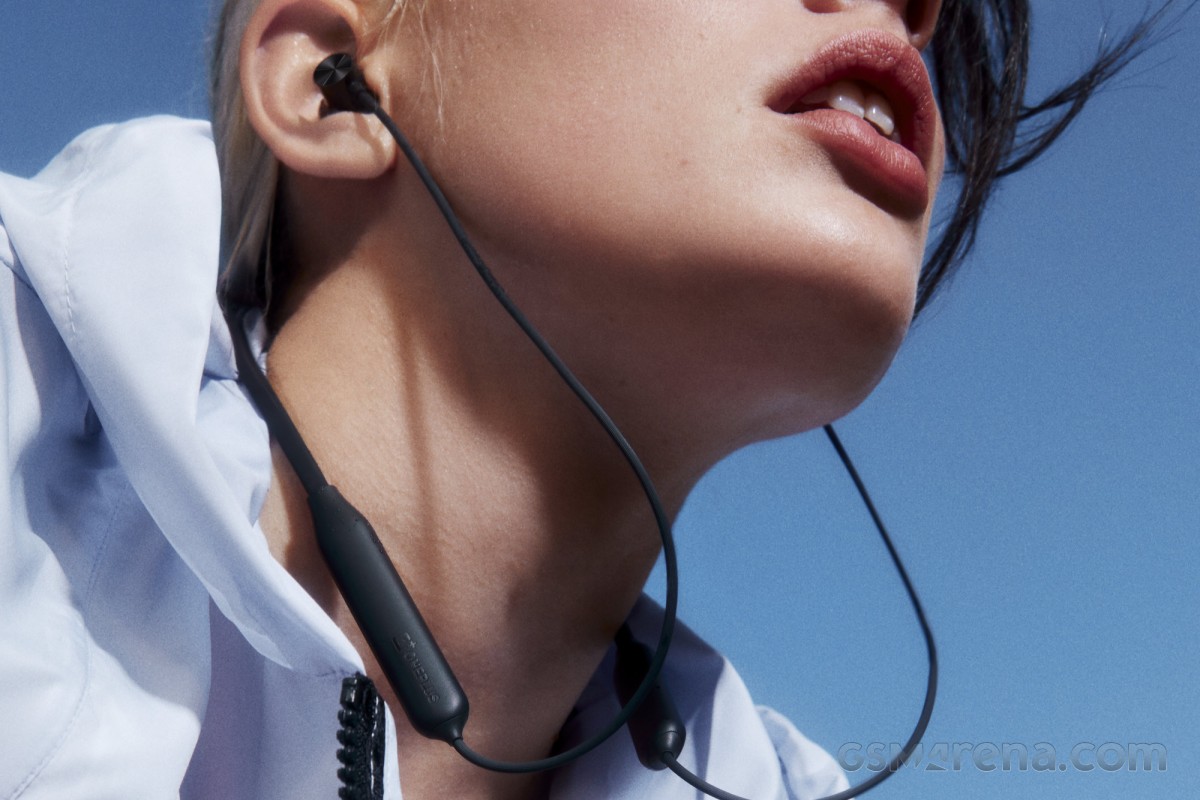 In terms of technical performance, Bullets Wireless Z2 have a moderate level of resolution and detail in the sound. This usually comes down to the choice of drivers used rather than the codec, although a higher bit rate codec couldn’t have hurt. Imaging and soundstaging were unobjectionable and offered some space and directionality to the sound that made the overall presentation pleasant to listen to.

The Bullets Wireless Z2 get sufficiently loud, with the maximum volume being uncomfortable to listen to on all but the quietest of recordings.

The microphone performance on the Bullets Wireless Z2 is good. There is audible compression when speaking even in quiet environments but voices still sound relatively clear with good tonality. In noisier environments, the AI scene-model algorithm does a good job of reducing ambient sounds and prioritizing the voice, which sounds fairly similar to speaking in quiet environments.

OnePlus claims a latency of minimum 94ms when paired with select OnePlus phones, although it fails to mention which exact OnePlus phones, how the headset achieves this lower latency, and what the latency is with other devices.

During my testing, the latency performance was good for watching videos as the delay was barely noticeable when paired with an iPhone. Latency on Android was notably higher when using AAC and the audio also took longer to sync when unpausing or skipping but was fine when using SBC.

Latency in applications was poor. Games and music apps demonstrated notable delay, with apps like piano players having almost half a second of latency after a key was pressed. As usual, I would recommend wired audio if latency is important to you or if you want to use the microphone while gaming.

The Bullets Wireless Z2 had minor connectivity issues during my testing. When testing with Apple Music on an iPhone XR, there would be moments where it would sound like the player would skip or rush past certain segments of the track, especially at the beginning. Adjusting volume on the iPhone would also occasionally result in pauses in sound. 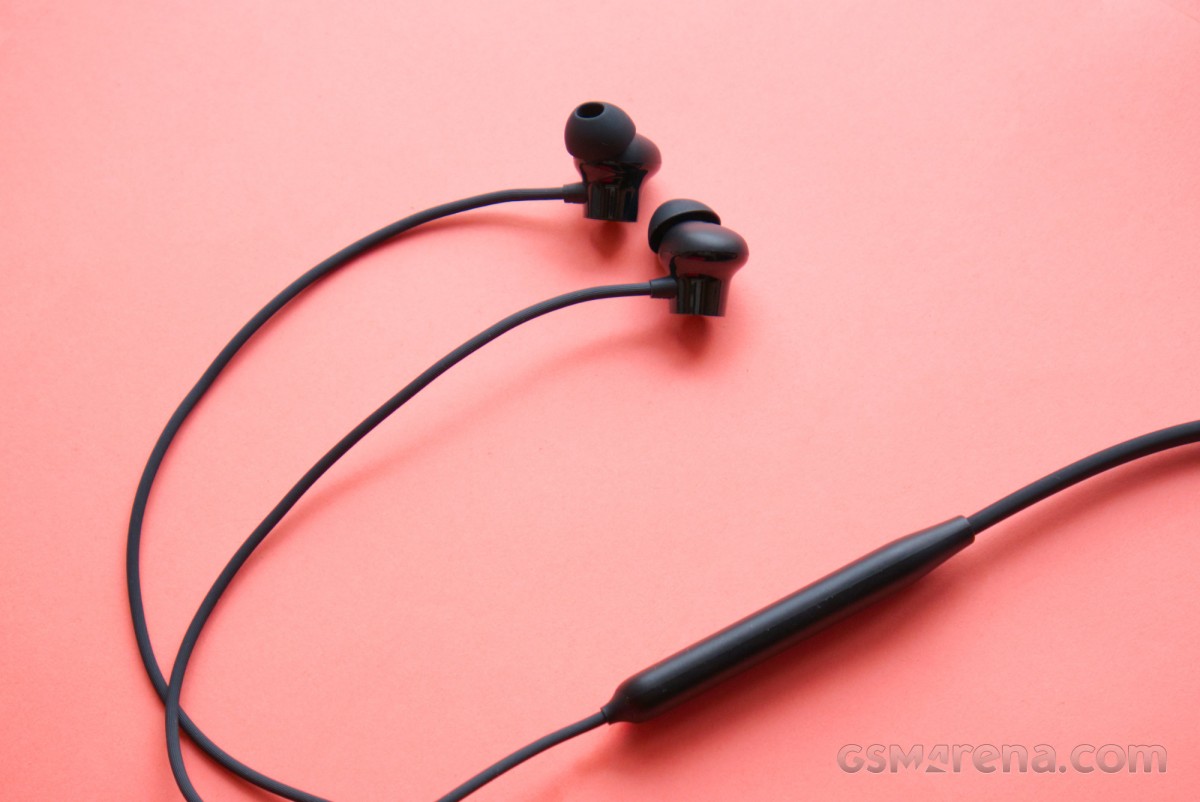 With a OnePlus 10 Pro, the phone would frequently lose sync between audio and video while watching YouTube videos, and it would take several seconds before the two synced again.

Aside from that, there were no other problems with connectivity.

The OnePlus Bullets Wireless Z2 are priced at INR 1999, which is only about $26. For that price, you are getting a good product overall, with good build quality, comfort, and microphone performance. The battery life, in particular, is excellent. 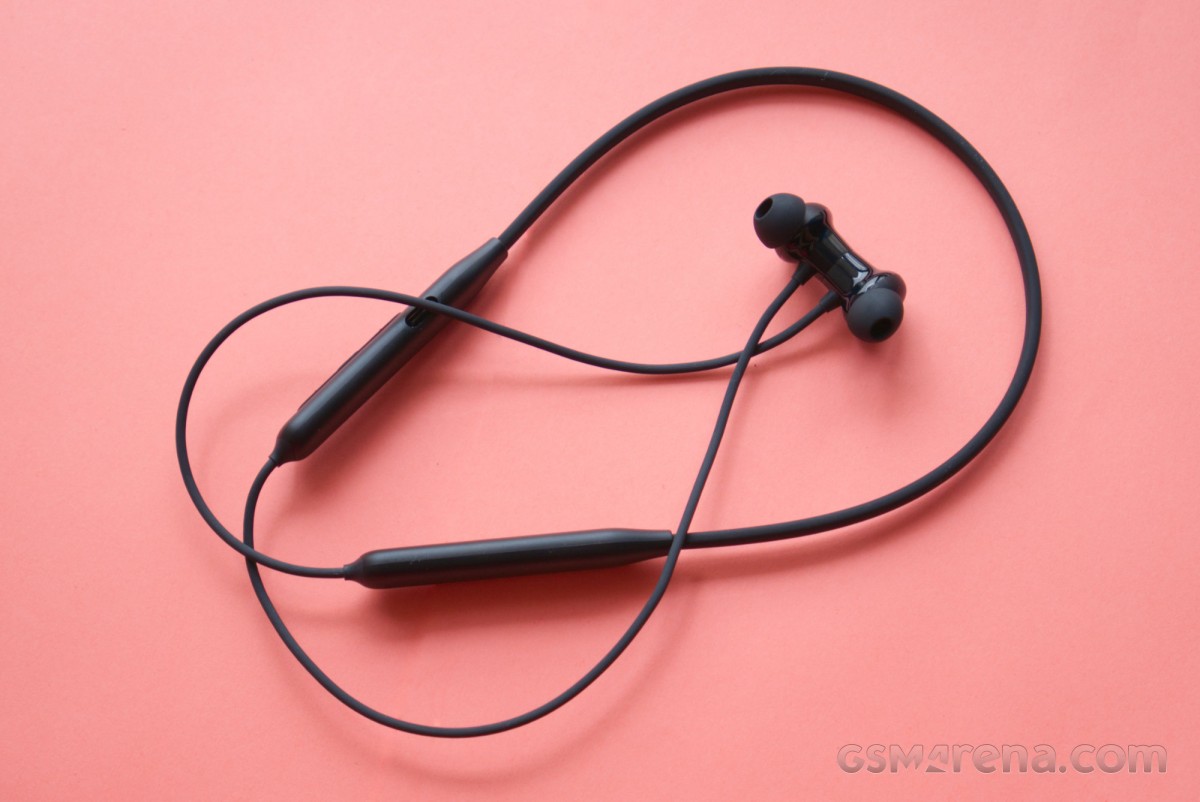 Where the headset disappoints is in audio quality. OnePlus went from making balanced-sounding headsets to obnoxious bass cannons over the past few releases, and the Bullets Wireless Z2 is perhaps the worst offender. It’s like they figured out a while back that people like bass and haven’t stopped turning that knob since even though it’s starting to get silly. I would gladly recommend a Non-Bass Edition if they ever were to make one because I don’t have any major complaints about the sound otherwise.

But of course, if that’s your preference, then you will find plenty to like with the Bullets Wireless Z2.