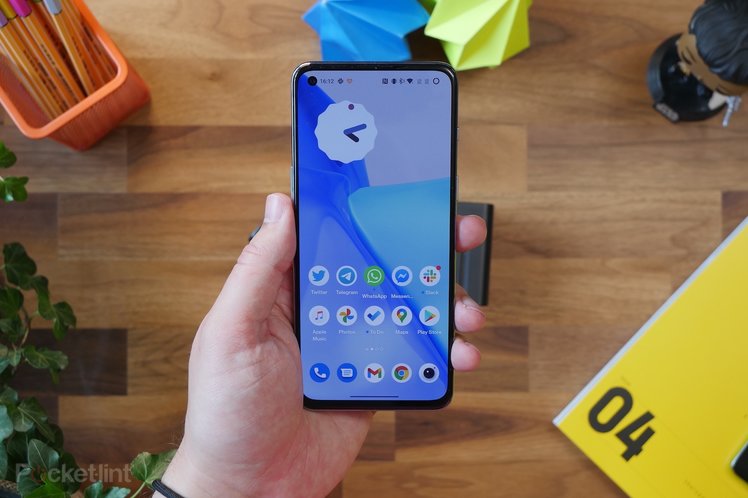 If the OnePlus Nord 2T feels familiar, that’s because it is. With just over six months of breathing room between this model and the Nord 2, it appears to represent a shift in launch cycle habits from the company.

In itself, that may be no bad thing, with customers across different regions given more choice when picking a mid-range smartphone.

However, on paper, there doesn’t appear to be much difference between the Nord 2T and Nord 2.

So, is this a pointless refresh, or a phone worthy of its place in the OnePlus range?

It’s rare for a company to upgrade and refresh a product line, introduce a tweaked design and actually make it worse. And yet, OnePlus has managed it with the OnePlus Nord 2T. Of course, from the front, it’s basically identical to its predecessor, but it most definitely isn’t from the back. 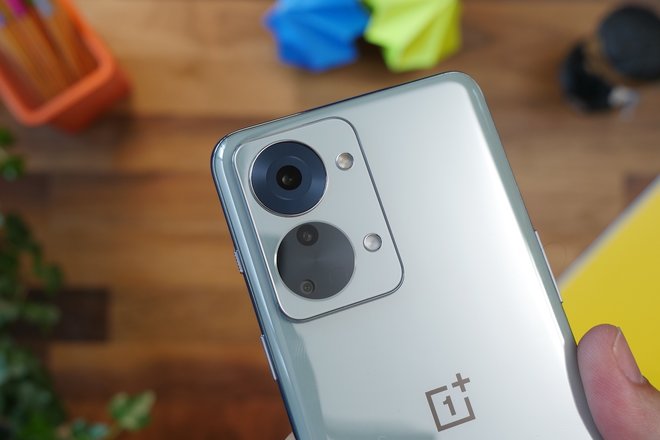 The neat, attractive camera housing with two vertically-aligned cameras has been replaced by what we consider – quite frankly – a monstrosity.

There are two very large dark circles. The top one surrounds the main camera, and the other plays home to the ultrawide and low-resolution monochrome sensor, aligned in a twitch-inducing off-centre layout.

It’s big, bulky, ugly and has no purpose. And worse: the two large circles aren’t even the same colour. One has a definite blue tint to it, while the other is grey/black. We understand there’s nothing practically wrong with this, the whole thing is just a tad bemusing.

Otherwise, the phone is as sensibly designed as the Nord 2. The large-ish size of the phone is fairly convenient, thanks to some practical curving on the glass at the back. Similarly, the completely flat surface on the front makes it easy to type on with two hands. With that said, the glossy finish on the back does make it prone to slipping off things, so you might want to use it with a case to stop that from happening. 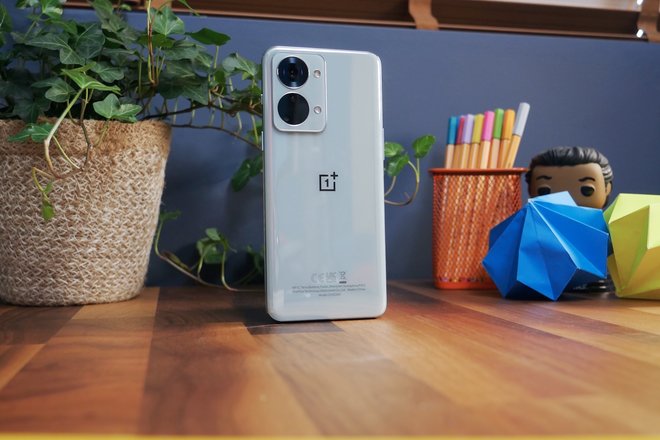 It’s the same materials as the original Nord 2, as well, with glass on the front and back, with a metallic-finished plastic frame around the edges. These are appointed with the usual buttons and ports, including the alert slider switch that OnePlus has featured on many of its phones over the past few years. It allows easy switching between ring, vibrate and silent modes.

On the whole, while we’re unconvinced by the change in camera housing design, the phone feels well made and practically sized and shaped. The camera change just feels like something OnePlus did to make it look different to the regular Nord 2 without any real purpose.

Like a lot of elements of the Nord 2T, its display is largely identical to the phone it’s replacing. It’s a 6.43-inch fullHD+ (1080 x 2400) AMOLED display that’s capable of reaching 90Hz refresh rates and is certified for HDR10+ content.

For a phone in this price bracket, it’s a very strong display. For starters, it’s completely flat, and so you don’t get any of the distorting or discolouring towards the edges that you sometimes get with curved displays, plus it’s very easy to type on two-handed. 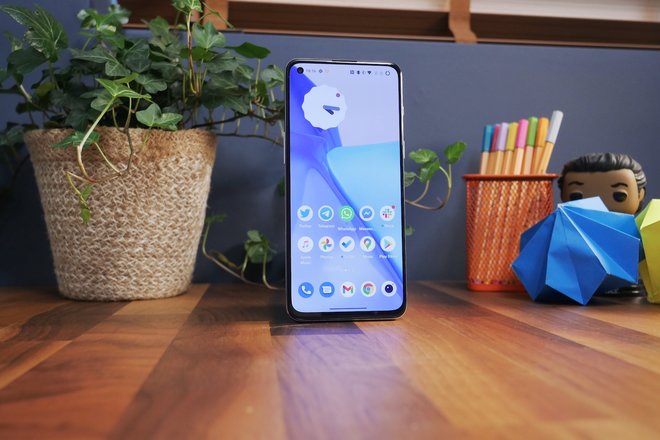 With 90Hz peak refresh rates, it’s not quite up to the heights of the flagship 120Hz panels, but, at the same time, that’s not something that’ll make a big difference to most people. At 90Hz, the screen is still very fluid and responsive, and that’s something OnePlus has prided itself on for a long while now. It delivers that feeling that the animation instantly responds to touch, and the details in the animation remain sharp.

It’s a bright screen, too, which helps keep things visible and easy to read even in bright daylight conditions. Plus, with the Full HD+ resolution, details are generally sharp. Again, not as crisp and smooth as a flagship quad HD panel would be, but it’s great when viewed at arm’s length.

Colours are really vibrant, too, thanks to being AMOLED, and this is perhaps where we have a little criticism. Like its predecessor, it does struggle with oversaturation at times, featuring a little too much contrast. That can make darker colours seem a bit crushed, particularly when the display brightness isn’t cranked up. 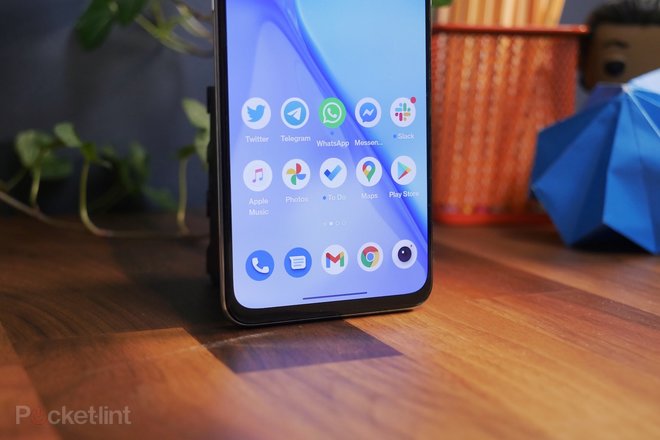 You can customise a lot of the colour balance within the software settings to make it cooler, or to fit a professional calibration option, but, even here, you can tell the screen isn’t quite as good as the displays you’d find on the likes of the OnePlus 10 Pro. Not that this is surprising, mind – the phone is about half the price of its flagship sibling.

As for software, that’s largely the same as what’s on the OnePlus 10 Pro (and Oppo’s latest phones). It’s Android 12-based Oxygen OS 12. That means it’s very easy to customise the appearance, and it’s not filled with all the additional bloat you get from the likes of Xiaomi or Samsung. OnePlus doesn’t duplicate lots of apps, and instead uses many of Google’s defaults for things like phone, messages, email and calendar.

The one omission with OnePlus’ software is themes based on your wallpaper colours. You can pick your own single accent colour manually, but not use the Android 12 theming capability. We’re unsure why, but it’s perhaps just so that OnePlus can say it has retained some individuality after the Oppo/OnePlus software merger.

Performance and hardware capabilities are a big selling point for the flagship phone. That’s the same on the Nord 2T. It’s not quite top-tier flagship power, but – with its upgraded processor – the Nord 2T delivers near-flagship levels of speed and fluidity. In fact, unless you benchmark the phone alongside a pricier alternative, you’ll be hard pushed to see a significant difference. 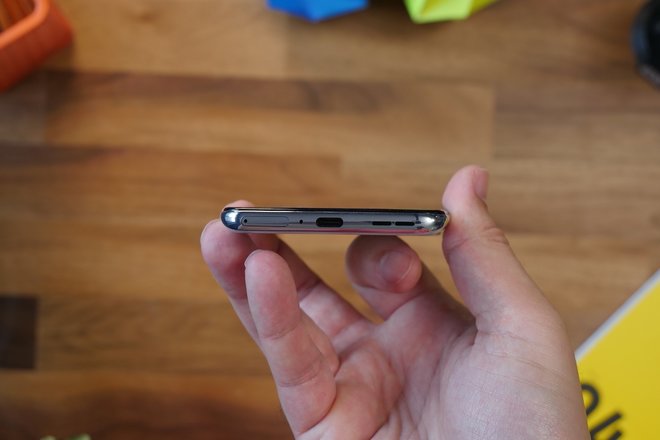 This is one area where the Nord 2T does differ from the Nord 2, in a way. It features a MediaTek Dimensity 1300, whereas the previous model had the Dimensity 1200. That slight bump should mean a slight increase in speed, but that – again – is very hard to discern with the naked eye. It’s helped along by either 8GB or 12GB of RAM, ensuring there’s plenty of memory at hand to run your most demanding tasks without an issue.

The end result is a phone that feels fast and responsive all the time, and one that doesn’t struggle at all to load even the most demanding games. It might lose some of that ‘instant’ loading feel you get with a Snapdragon 8 Gen 1 phone, but we genuinely feel the experience is fast and responsive enough that you genuinely wouldn’t care about that split second difference.

That processor is alongside 128GB or 256GB of storage, and a 4500mAh battery. Those specs are identical to the Nord 2 – however, this new model does charges quicker. OnePlus has equipped it with the same 80W SuperVOOC wired charging that’s on the OnePlus 10 Pro, which means you’ll get a full chage in under half an hour. 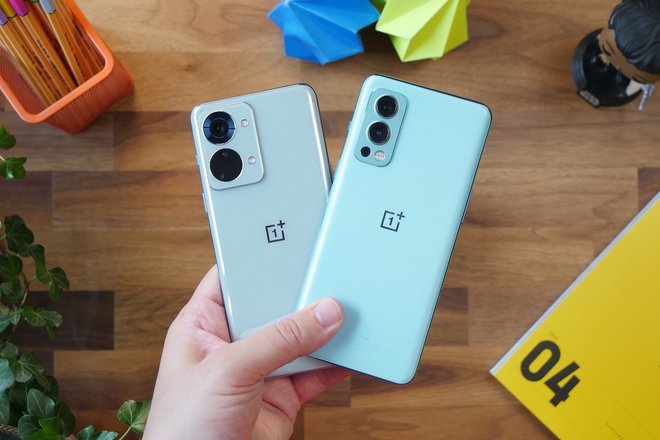 The battery life itself is strong. We never struggled to get to the end of a full workday with a full charge. In fact, it was more of a struggle to try and completely drain it. With our own light to moderate usage with 2-3 hours of screen time in a day, we’d regularly finish at bedtime with more than 35 per cent leftover – sometimes more than 40 per cent.

As mentioned, there’s fast charging to fall back on when it’s empty, too, so just plugging it for 15 minutes or so is enough to fill up quite a big chunk of the battery and get you almost a full day’s worth of power.

When you combine all of that with the Bluetooth 5.2, Wi-Fi 6 and 5G support, the phone’s overall experience should be one of speed, and getting things done quickly. But as good as it is, it’s really not all that different to the Nord 2. We had a similar experience with that phone.

Like a lot of the rest of its specifications, the Nord 2T’s camera loadout is essentially the same as the Nord 2. That means a 50-megapixel primary camera alongside an 8-megapixel ultrawide and a low-resolution 2-megapixel monochrome sensor.

The 50-megapixel camera is the one that will likely prove to be the winner here, based on our experience with the previous model. It’s got the same Sony IMX sensor that you’ll find in a number of flagship phones, including the Oppo Find X5 Pro and in the ultrawide of the OnePlus 10 Pro.

As for the monochrome 2-megapixel sensor, that’s mostly just there to add extra light data to improve the black and white photography mode – it’s not there to be used on its own.

In good daylight, the primary camera delivers results that are sharp and colour-rich with a slightly warm tone that makes the photos feel just a tad more real. On its own, it’d be a perfectly good camera for pretty much anyone. In our experience, though, the ultrawide somewhat tarnishes the experience.

Of course, it doesn’t help that the sensor is lower resolution, but that wasn’t the main issue we had with it. In comparison to the primary camera results, the details were rough and both colour and depth were noticeably flatter. This is likely not helped by the increased noise – even in bright scenes – and the fact that it often didn’t seem to know what to do with HDR. We’d often see it either produce an image that was completely washed out, faded or with completely crushed darker areas.

If the two cameras were consistent with each other at least, this wouldn’t be much of a problem. But – like with the Nord 2 – the ultrawide just isn’t as good as the main lens, and you can tell. We did often see some significant lens flare from both cameras at times, as well, which isn’t ideal.

One surprise positive is that – despite the lack of a dedicated telephoto zoom lens – the 2x digital zoom using the primary camera can produce strong, sharp images. Probably no surprise, again, given that it is using the main camera and just cropping into the image.

The one thing to remember – as always – is that this is a mid-range phone. And, while imperfect, the secondary lens is at least useful to expand your focal length, giving you the ability to capture wider shots. No, the results aren’t as good as the main camera, but they’re good enough we feel for the odd time you want that extra width.