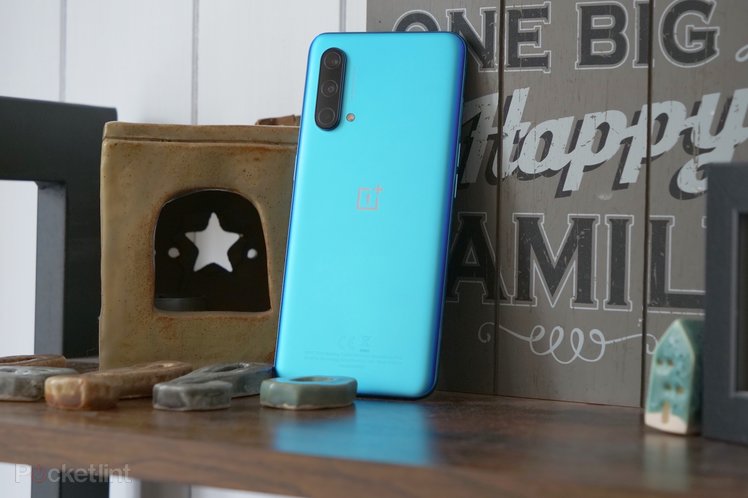 OnePlus has be on something of an exploratory journey over the past 12 months or so. Rather than delivering one or two phones at a time and launching them both globally, it took a more regional approach.

That meant while some markets got the original Nord, others – like the US – didn’t, then OnePlus followed up with various models to suit different territories. It even continued this approach with the OnePlus 9 series, offering a 9R in India, but nowhere else.

This is pretty standard practice for most manufacturers, but wasn’t for OnePlus. At least, not until now. But obviously this transition to being a ‘proper’ smartphone manufacturer is working, because it’s back again with another Nord: the Nord CE 5G.

For a while there’s been this sense that when building a good smartphone, you have to start with the right materials. It had to be aluminium or steel and glass. Using plastic was as good as writing ‘cheap trash’ over the back of the phone in capital letters. But things have changed, thanks in part to the efforts of Samsung. 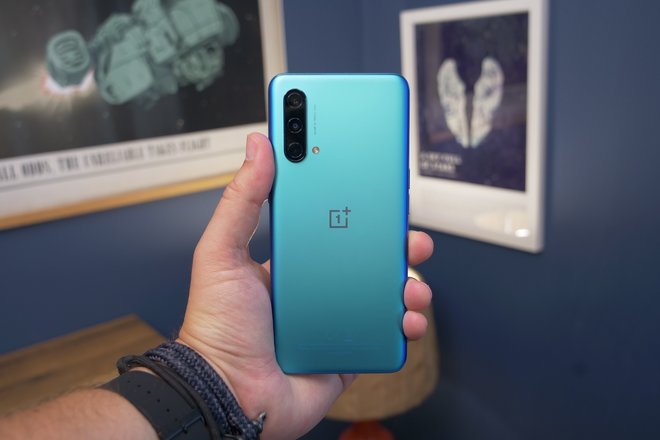 With its Galaxy Note 20, S20 FE and this years S21, it showed you can use plastic materials in a way that doesn’t detract from the look and feel of the phone. OnePlus has taken the same approach with the Nord CE. Our unit in Blue Void has a lovely frosted/matte finish to it that’s very reminiscent of the Samsung approach, and we like it a lot.

It has an eye-catching blue finish with just the slightest splash of purple up the edges. There are two other safer colours in Charcoal Ink (Black-ish grey) and Silver Ray.

Being a frosted/matte finished plastic does have its advantages too. Firstly, it’s not at all slippery. So it’s not hard to keep a hold of one-handed, and it’s not likely to just randomly slide off the arm of your sofa. Secondly, it not as likely to crack or turn into tiny shards when it’s dropped or banged against something. It’s a very practical choice. 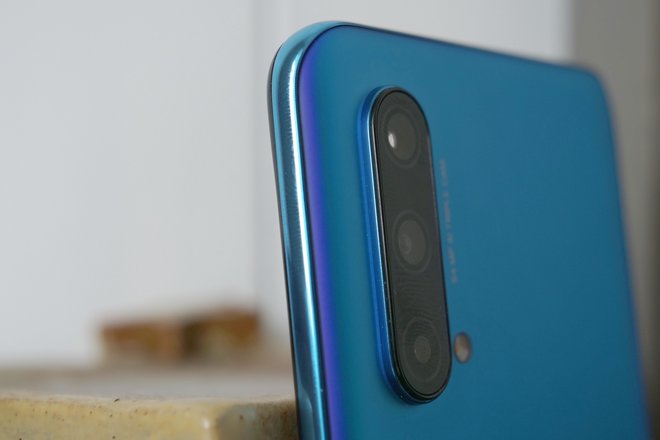 That’s not the only practical choice made by OnePlus with the Nord CE. It’s both slimmer and lighter than the first Nord, so it doesn’t feel like a huge phone in your hand. It’s not exactly compact, but it’s easy to hold and comfortable enough to use. And it has a 3.5mm socket for wired headphones and headsets.

One choice that might not go down so well with long-time OnePlus fans is the removal of the alert switch. For years this simple slider button on the side has set the company’s phones apart from rivals, offering an easy tactile way to switch your phone to silent or vibrate. Apparently, that’s not considered ‘Core’ enough to make it on to a ‘Core Edition’ OnePlus phone.

In case you were wondering: yes, that’s what CE stands for.

Other core design choices include: not having a physical fingerprint sensor. Instead, there’s an in-display one so there’s nothing on the back, breaking up that glorious matte blue surface. The camera housing is a pretty basic pull-shaped protrusion and the display has just the one hole punched through it for a single camera. 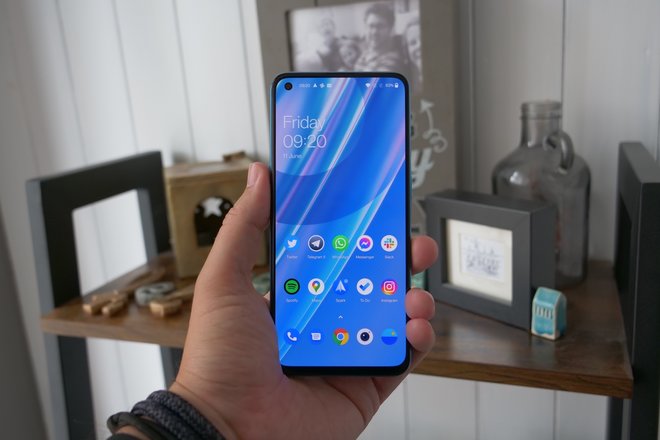 Sadly, one last feature not deemed essential to a Core Edition phone is a subtle haptic motor for feedback. That means, with it enabled, keyboard taps are accompanied by a nasty feeling buzz, rather than a subtle tap. We quickly switched it off.

Screen resolutions haven’t changed much in recent years with most smartphones opting for some version of full HD. This particular flavour is 1080 x 2400, which is the same as on most other OnePlus phones. That means it’s plenty sharp enough for day-to-day tasks with individual pixels imperceptible.

It’s AMOLED too, which means it’s a pretty punchy panel with vibrant colours and deep blacks. In its default ‘vivid’ mode the screen often over eggs the colours a bit, but with this being a OnePlus phone running OxygenOS, you get to customise its balance quite lot. Switching to ‘sRGB’ mode balances things out a lot more, but does make it a bit less exciting. 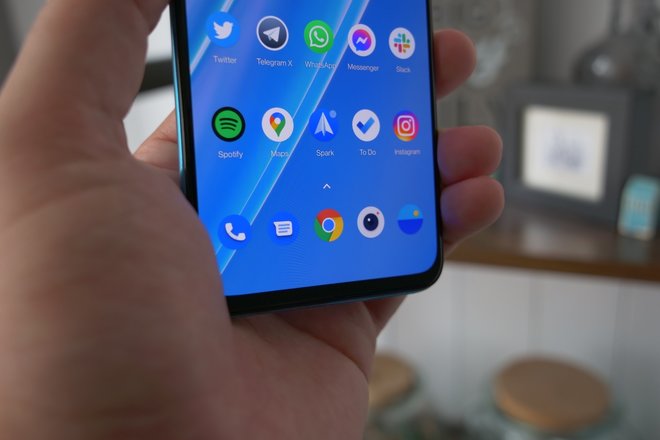 The 90Hz refresh rate ensure that when you touch the screen, or swipe at something in the interface, the response is immediate and smooth. It doesn’t reach the heights of the OnePlus 9 Pro’s 120Hz, and doesn’t feature the advanced adaptive refresh rate tech that adapts it to the content, but it’s impressively fluid and smooth for a mid-ranger.

That’s not the only element where you just about get the hint this isn’t a top tier panel.

For instance, despite being AMOLED, when the screen’s off (or black) it’s not quite as dark as the black frame around the panel, so you don’t get that blending effect, you can see where the bezel stops and the screen starts. There’s also a slight colour shift when you look at a white screen from different angles.

Just for a little perspective though, the fact we’re picking up on such non-issues as a slight negative shows two things: how competitive the mid-range market has become recently and how good this phone is for the money OnePlus is asking for it.

Part of the joy of OnePlus phones over the years is the customisation on offer from the OxygenOS software. We’ve already mentioned the ability to calibrate the screen to your exact liking, but there are also modes like Reading Mode which turns the screen monochrome for when you load up your favourite e-book app.

There’s not much new to report from a software side with the Nord CE. It’s the same as the software found in the OnePlus 9 series and OnePlus 8T that came before it. It’s OxygenOS 11 based on Android 11, which represented a major redesign when it first launched.

While OnePlus was often seen as a manufacturer offering a stock-like Android experience with lots of customisation choices, it no longer feels that way. Oppo’s ColourOS offers far more customisation of elements like the fingerprint scanner animation, always-on display, icon styles and shapes. OxygenOS by comparison feels quite stripped back and bare.

This does help it retain that feeling of ‘essentialism’ though. It has everything you need, presented in a clean and clutter free way. There aren’t any unecessary apps pre-loaded, and even core parts of the experience like phone, messages and software updates are now powered by Google’s own apps, rather than OnePlus’ own design.

Where the Core Edition OnePlus Nord gets it right is the feeling of speed and fluidity under your fingertips. A big part of that, as mentioned, is down to the high refresh rate of the screen and the software. OnePlus has always done a great job of optimising its software animations to feel speedy.

That performance transitions well into games and apps too. Using it daily as a main phone, it never left us in any real need of more, despite ‘only’ having Snapdragon 750G. It’s not a top-tier platform, but just like the Snapdragon 765G that appeared in the first Nord, this one gets the job done without any trouble.

Playing Mario Kart Tour was a hassle-free and smooth experience, as was browsing the web, scrolling through Twitter and any other app we came across in our day-to-day phone usage. 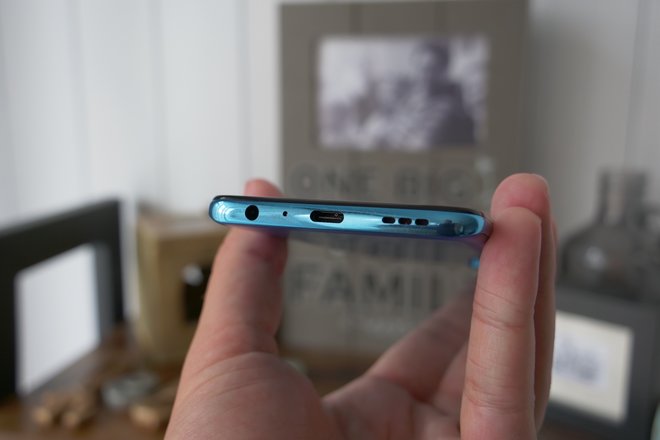 Similarly, the 4500mAh battery inside is more than strong enough to cope with the most demanding of days. For the most part, with light usage, we’d finish the day with something like 40 per cent of the battery left over. That’s with the usual hour or so of web browsing and social media, plus a chunk of gaming.

Once empty it fills up quickly, as is typical OnePlus style. It uses a 30W wired charger, which OnePlus has clunkily named ‘Warp Charge 30T Plus’. In actual fact, it’s almost the same as Warp Charge 30T, in that it can fill 70 per cent of the battery in abut half an hour. It’s been a mainstay feature for OnePlus phones for many years and something of a lifesaver when you’ve forgotten to charge your phone or when it drains unexpectedly.

Ah, OnePlus and cameras. It seems to be an age-old complaint of OnePlus phones having a not-quite-good-enough camera system. They’ve definitely improved the quality over the past couple of years, there’s no denying that, and for the most part the primary snapper on the Nord CE is decent. 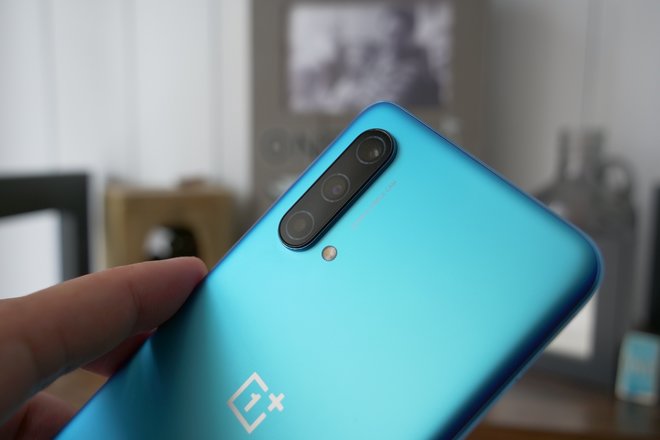 You’ll get sharp photos with good colours and depth of field from the 64-megapixel sensor. It pixel bins down to 16-megapixel images automatically, so isn’t using all 64 million of those pixels individually. Not unless you enable it.

It has all the camera features you’d expect too. It’ll take portrait shots with excessive background blur, night mode shots, panoramas, timelapses, slow motion video and even has a ‘pro’ mode for adjusting ISO, white balance and shutter speed manually yourself.

There is one major weakness we’ve encoutered on the Nord CE’s primary lens however, and that’s focus distance. It really, really doesn’t like focusing on anything closer than about 13 or 14cm, which means close up shots of flowers, bugs, berries and the like are near-on impossible. You can see examples that would normally be simple shots, impossible because it refused to focus.

We don’t expect super macro skills from an affordable mid-range necessarily, but we do expect it to at least handle close up focusing a bit better than this.The only solution is either taking the photo from further away and cropping the photo in edit, or using the 2x zoom function to zoom in digitally when taking the photo.

Without being too cricital though, having the 2x zoom and the seperate ultra-wide lens means you get enough versatility in shooting to make it useful in most situations. There’s a variety in focal lengths, but we do question the decision to put such a visually distinct different between them.

What we mean by that is there’s a noticeable drop in quality when switching from the main to the ultra-wide. Images lose some crispness, and appear visually more contrast heavy and darker, losing a lot of vibrancy in the colours while adding more noise, even in daylight. At times it also adds a hyper-real element to the colours where they just seem unnaturally saturated. It’s not the most consistent of cameras.

As for the third camera, that’s just a low resolution black and white sensor to act as a backup to the other two, bringing in some more light data.

On the front, the selfie camera is decent enough with OnePlus’ HDR capability shining when it comes to balancing out heavy backlighting behind you when snapping pictures of yourself. So even if the sky and clouds look too bright to get a decent shot of your face, the system does well to make sure that it’s not over-exposed and washed out.