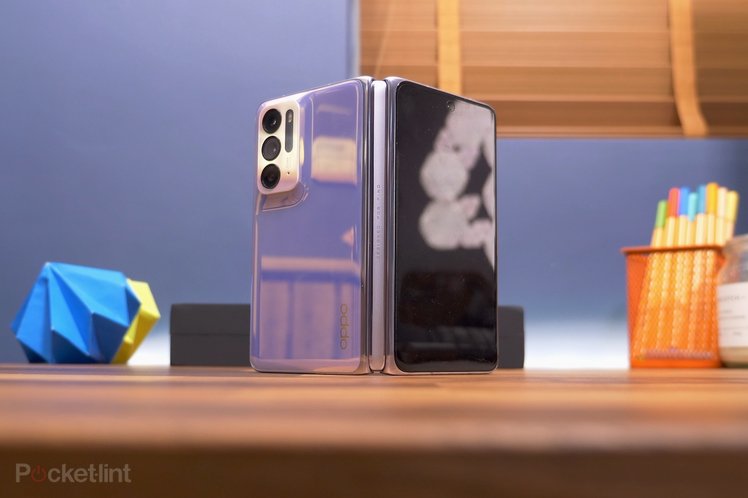 We’re still relatively early in the story of foldable, flexible smartphones and that’s a good thing. It means different companies are still trying different shapes, sizes and forms to see what works best and put their stamp on this infant market.

Oppo has just announced its first consumer foldable, and while the Find N might look a little similar to other devices that exist, there are differences that make the user experience drastically different.

Look at the Find N on its own, and you might think Oppo copied a page from Samsung’s Galaxy Z Fold playbook, but when you see them next to each other you’ll know that’s not exactly the case. Oppo’s Find N has that familiar book-style folding phone appearance, but its aspect ratio makes it a different proposition to Samsung’s.

It’s noticeably shorter and wider than the Samsung, and that gives real benefits when it comes to using the front screen for – well – anything. You get more space for video, and a less cramped typing experience, plus a better viewfinder for taking selfies or vlogging with the main cameras. Plus, you don’t need to stretch as far to get into the top corners. It’s easier to use one-handed, that’s for sure.

This shorter size also means it’s quite compact, having a surface area that’s smaller than an iPhone 13 mini, although its thickness when shut means it’s basically like having two iPhone mini’s stacked on top of each other. 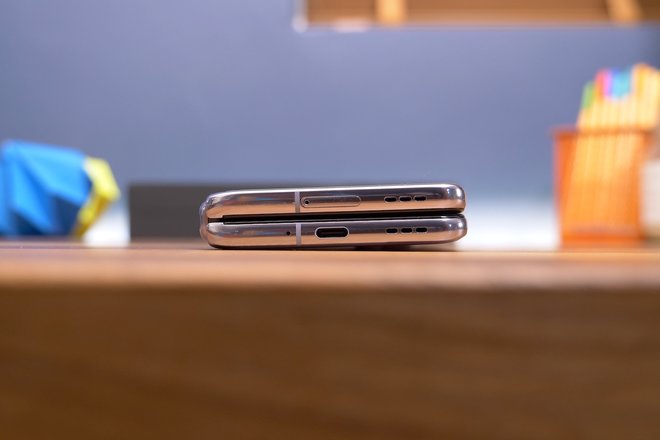 The rear of the phone bears a resemblance to Oppo’s Find X3 Pro, although a more squat version. The triple camera housing sits on top of a curved/ramped up protrusion on the back, and this particular model features a purple-ish finish that shimmers, shines and reflects golden light at various angles depending on the light in the area.

The only real downside of the finish on this one that we’ve seen so far, is that fingerprints show up really easily.

As for the metal edges, those are a pure silver-coloured polished aluminium that feel really strong and sturdy. They also feature a physical fingerprint sensor in the side that means you can unlock your phone whether it’s open or shut. 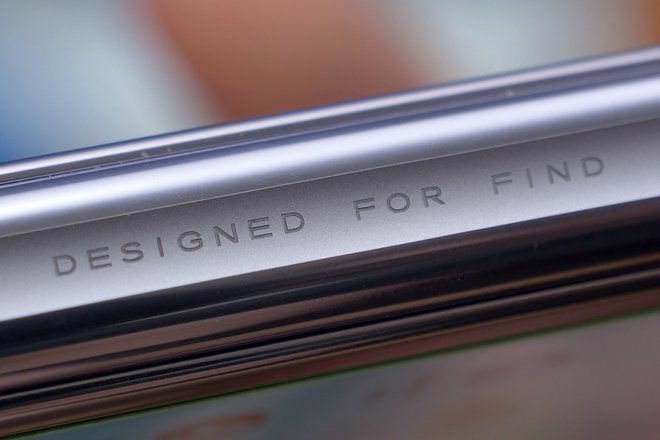 The hinge feels really sturdy too. So far we’ve not experienced any wobble, or looseness, whether the phone is open or shut. This hinge’s spine is the only part of the metal that isn’t completely shiny, with a matte-finished groove running down the centre.

And the hinge can hold the screen at various angles, so if you want to rest it down during video calls you can.

When you do open it, you’ll notice the screen doesn’t feature that single distinct crease we’ve seen in Samsung’s phones so far. That’s because of the way it curves inside the body when it’s shut, similar to the Moto RAZR. 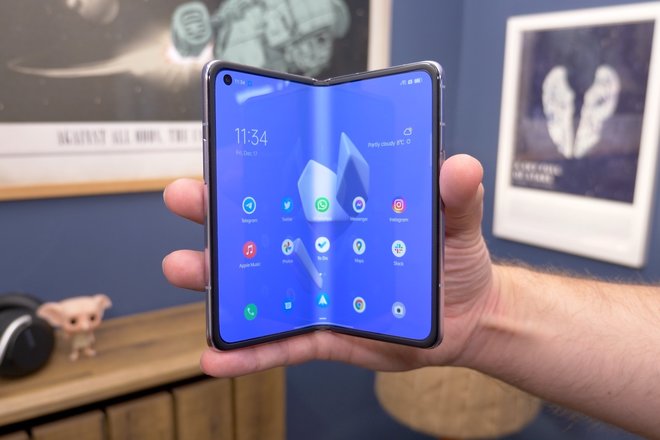 There are some subtle ripples in the flexible screen if you look in the right light, which you can feel if you rub your finger or thumb along them, but it’s nowhere near as noticeable as any others we’ve seen so far from any manufacturer. It’s practically invisible and undetectable most of the time.

Moving on to the actual displays briefly, and there’s lots to like here. Both screens are AMOLED panels boasting up to 1000 nits peak brightness. Where they differ is in refresh rates and – of course – size. 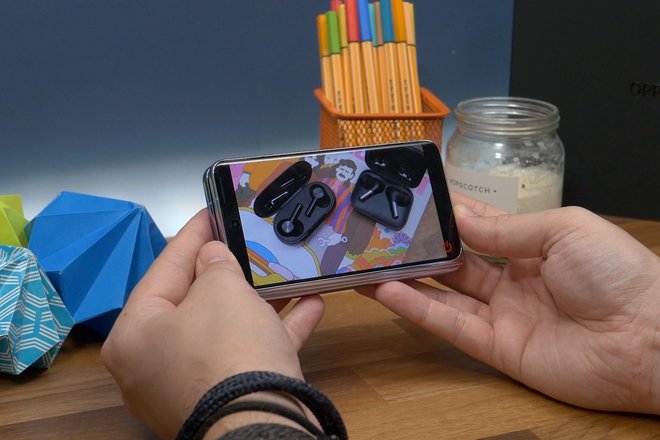 The main display on the inside features variable refresh that can go from as low as 1Hz all the way up to 120Hz, and adapts based on the content you’re viewing on it.

The internal display is 7.1-inches, and has an almost square ratio which means it’s not perfect for watching videos on. You get pretty hefty black bars on it. However, there are some software tweaks that make it really useful.

With an app open in full screen, a swipe with two fingers down the middle turns it into split screen mode, essentially giving you two regular phone screens in the same panel. Or, you can pinch with four fingers to launch the app in a floating window, that you can resize and move around as you need. 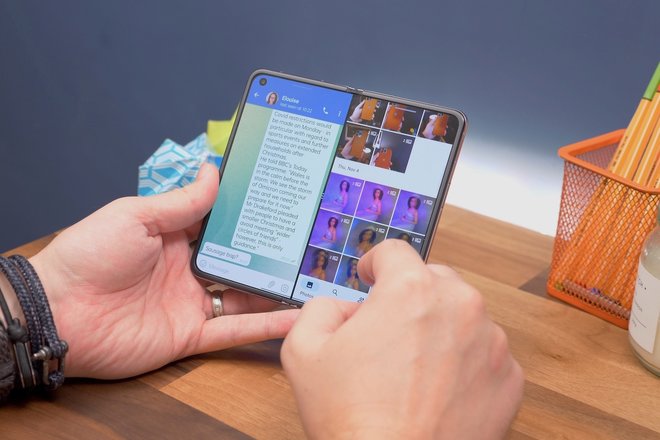 And when you open or close the phone, you can continue in the same app you’ve had open whether you’re moving to the front screen or the main internal display. That front display is a 60Hz panel. That switching from one to the other when you’re scrolling through the interface can be a tiny bit jarring, but for media consumption and browsing that doesn’t support 120Hz, it’s hard to see the difference in smoothness.

Looking at the internal components used, it’s clear Oppo meant to make the Find N a proper flagship-powered phone. It’s got the Snapdragon 888 platform running the show and that’s alongside either 8GB or 12GB RAM.

The amount of RAM you get depends on the storage model, with the lower model featuring 256GB storage and the higher boasting a storage capacity of 512GB. It’s UFS 3.1 too, so nice and speedy. 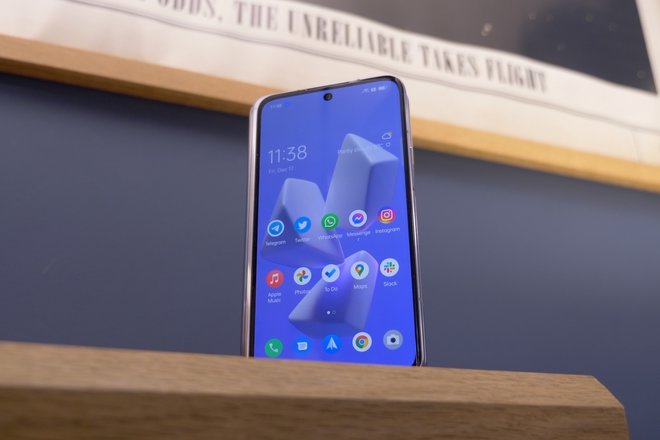 As for battery capacity, that’s largely the standard affair. With 4500mAh, it’s what you get on a lot of Oppo’s phones and should be plenty to get you through a full day.

Oppo fans might be a little disappointed to see there’s no super fast 65W SuperVOOC charging, but with the 33W flash charging variant, it should charge quickly enough, giving you around 70% charge in half an hour. It also has the versatility of Qi wireless charging and – if you use an Oppo AirVOOC charger – you’ll get up to 15W speeds wirelessly.

Camera-wise, there’s a familiar sensor in here. Oppo’s used the 50MP Sony sensor that’s in the primary camera many times before, most notably in the Find X3 Pro. It’s got OIS and PDAF, and should mean sharp, blur-free and vibrant images. 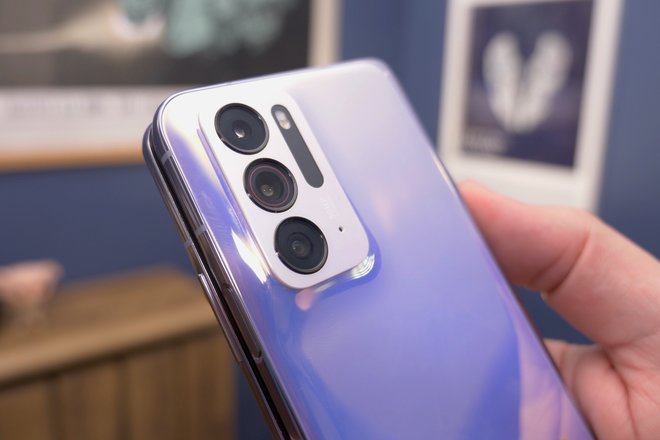 It’s joined by two other cameras on the back: one 16MP ultrawide and a 13MP telephoto with around 2x optical zoom, to give you that bit of versatility.

There are also two selfie cameras as we’ve mentioned: both are the same 32MP sensor. We’ll need more time with the phone to test these cameras further. However, with one main camera that we know is good from previous experience, we have high hopes this will deliver an experience that’s not overly compromised.