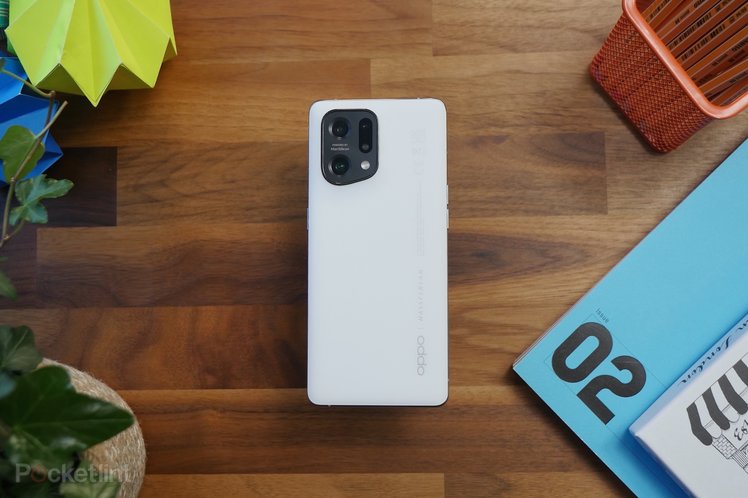 While the Find X5 Pro may have stolen the limelight, the standard version of Oppo’s flagship series is equally intriguing.

By offering many of the same features as its premium sibling without the same top-end price tag, the regular Find X5 should appeal to anybody on the hunt for an affordable flagship smartphone.

So, is this an underrated gem in the wide range of Android phones, or has Oppo made a few too many concessions with the Find X5?

We’ve been testing the device over the last few weeks in order to find out.

If there’s one area that the Find X5 is most different to the Pro model, it’s in the design. At least, when you look at it from the back. While the camera housing has the same shape and camera layout, the external surface isn’t seamlessly ramping up from the same panel as the rest of the phone’s rear. 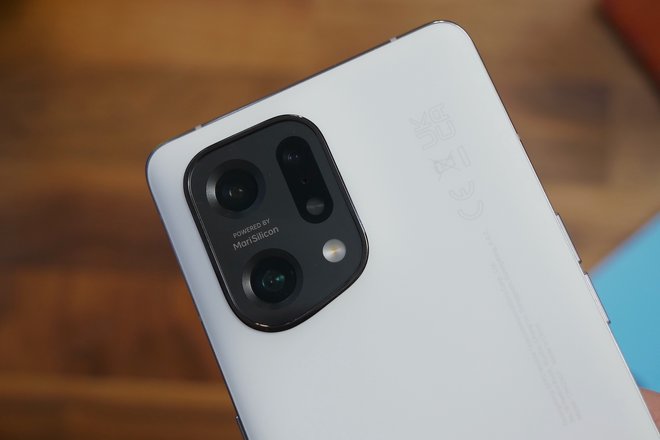 The finish is really lovely to the touch and to the eye, especially in the matte white of our review unit. It’s a frosted look that feels smooth to touch, with the curves around the edges and the camera making it very comfortable to hold.

Then there’s the added benefit of fingerprint resistance. You just don’t experience smudge marks here – at least with this colour and finish. The ceramic black Find X5 Pro was the exact opposite, needing no encouragement at all to show off where you had held the phone. We can’t speak for the black or purple models, however, since we’ve not seen those in person. 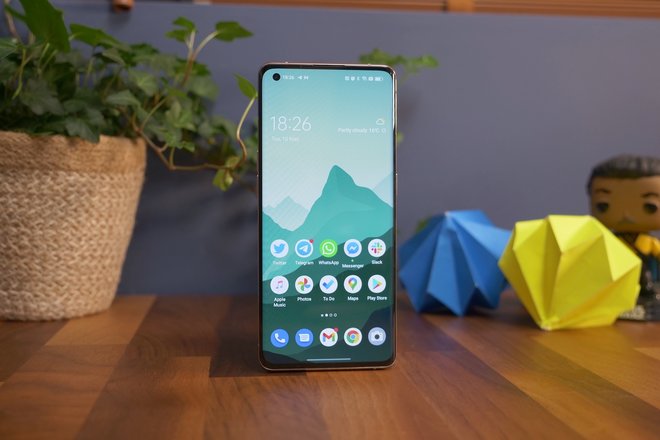 From the front, meanwhile, you’d be hard-pushed to notice any significant difference between the Find X5 and Find X5 Pro. Look closely, and you’ll see the Find X5 is ever so slightly narrower and shorter, but we’re talking millimetres here.

It has all the hallmarks of a flagship phone, really. But, still, in the age of more manufacturers swerving towards flat displays, there’s a sense that the curved glass on the front makes the Find X5 look a little dated. Not that it’s a big deal at all. The bezels are relatively slim, as well, but sadly don’t quite match the curves of the rounded corners, so the phone has a bit of a non-uniform look from the front.

It’s not too uncommon these days to find a variation of FullHD+ resolution in a smartphone. In fact, it’s the most common, with very few – bar the ultra-premium tier models like the Find X5 Pro, OnePlus 10 Pro, Galaxy S22 Ultra and a few others – supporting Quad HD. And when you get a 6.55-inch display like this one, with over 400 pixels-per-inch sharpness, you understand why. FullHD+ is more than sharp enough. 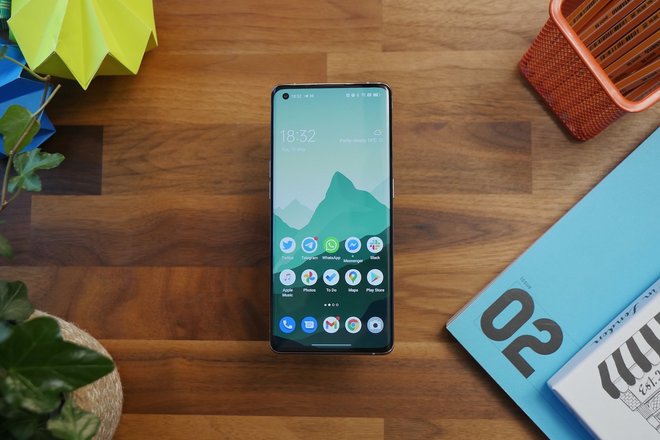 Text and details are clear. And, unless you place it side-by-side with a higher resolution panel and look very closely, sharpness is not something you’ll ever complain about. Being an AMOLED panel means it brings the usual vibrant colours and deep blacks, as well.

However, now that the Find X5 has 10-bit/1-billion colour support, you’ll get a much wider colour coverage than in previous years (presuming you’re watching content that supports it).

It’s a bright panel, too. It can hit 1000 nits peak brightness, which is helpful for those HDR10+ videos with bright spots in the scene. However, with that said, one of the best things about Oppo’s displays this year is also one of the least exciting: auto-brightness. It’s just one of those things you don’t notice when it’s doing its job properly – because you shouldn’t.

Not only did the brightness always seem to be suitable for the environment we were in (ie. not too bright at night, and ramped up in daylight outdoors), but it also changes smoothly in very small increments, so it’s not jumping randomly between bright and dim.

It’s a genuinely good screen, and, with its 120Hz refresh rates, it’s smooth and sharp pretty much all the time, regardless of the speed at which you’re scrolling and swiping around the interface. 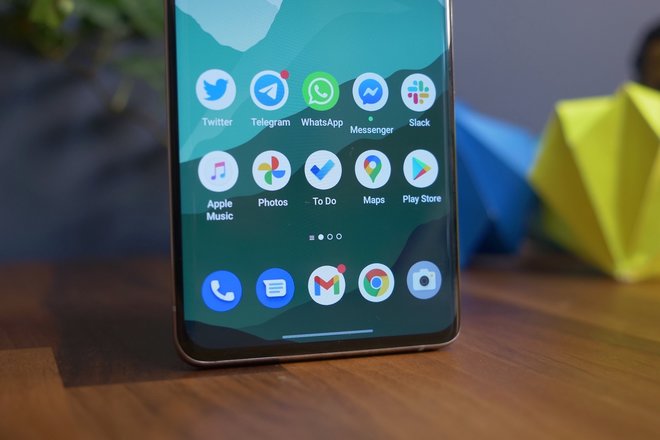 Speaking of interfaces, this particular one is the latest iteration of ColorOS, which is based on Android 12. That means you get all the usual goodies, like colour theming based on your wallpaper and various other optimisations, including a smart battery feature that learns your usage patterns in order to reduce consumption.

Oppo is very light-touch when it comes to added bloatware and duplicated apps, too, which is a refreshing change. That means the basics – the web browser, messages and phone apps – are just Google’s own that come pre-installed on most Android phones. The only added extras are things like the gallery app and the Oppo camera app, which has a Hasselblad themed layout and colour scheme.

ColorOS 12 is among the best out there for easy visual and audio customisation, as well. You can change icon shapes and layout, install custom icon packs and create your own always-on display, among many more options to give it the look and feel you really want.

Plus, Oppo’s Melody notification feature means you just get a little jingle when you get a cascade of notifications all at once, rather than just repeating the exact same sound for every single one. Nifty.

For those in the know, the biggest red flag surrounding the regular Find X5 is the inclusion of the Snapdragon 888 processor. For some, understandably, the logic is that it would be better to go with a more current platform. However, if the choice was between going with last year’s flagship processor and a 2022 mid-range chipset to save money, we’re glad Oppo went with the 888. 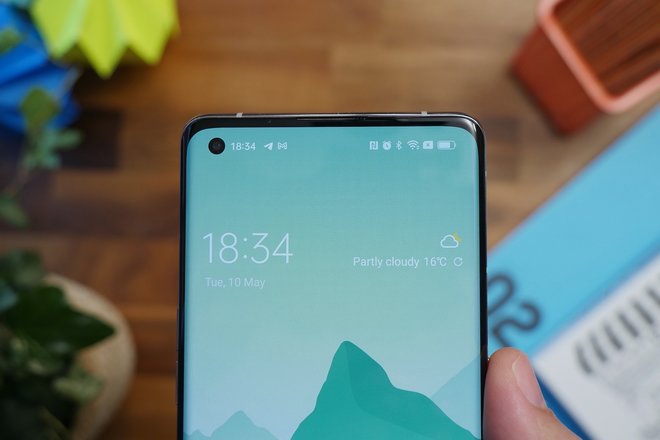 Let’s not forget – until the 8 Gen 1 was launched by Qualcomm earlier in 2022, the Snapdragon 888 was the ultimate system-on-a-chip for raw speed and performance. And it’s still very quick, coping really well with any game or app you might want to use on it. Whether it be Call of Duty Mobile, Mario Kart Tour or just keeping your streak going on Wordle.

Part of that feeling of speed and fluidity comes from the display, of course, with it able to reach up to 120Hz refresh rates. It means that we never found ourselves waiting for something to happen after a swipe or tap on the screen. It also means there’s little in the way of stutter or lag, except for maybe the occasional rough animation in poorly optimised apps (we’re looking at you, Twitter), which we experience on every Android phone.

One of the advantages of having a slightly less power-hungry display and processor setup is that it drains less battery. What we found, then, was that though the Find X5’s 4800mAh battery lacks 200mAh when compared to its Pro sibling, it would easily last just as long on a full charge. 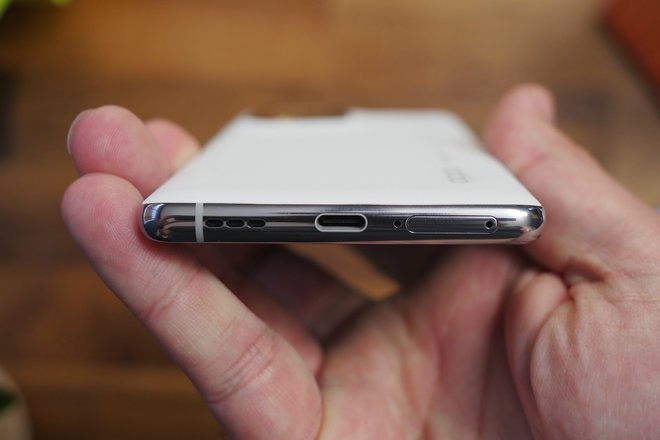 Getting through a full day with a few hours of screen time (mostly social media and chat apps) was never an issue. In fact, it wasn’t that rare to finish at 11pm with 50 per cent or more. With gaming and camera usage, that is obviously lower. But, even on our heaviest days with some longer Mario Kart Tour sessions, we struggled to drain more than 70 per cent.

For light users then, this could be a two-day phone – especially if you live in a 4G area and don’t have 5G coverage.

What’s refreshing about Oppo’s approach to cameras is that it doesn’t include gimmicky lenses to make up the numbers – and it’s the same with the Find X5. There are three lenses, and they all have a purpose. There’s a triple camera system featuring a 50-megapixel primary, 50-megapixel ultrawide and a 13-megapixel telephoto 2x “optical zoom” camera. All three lenses feature PDAF (phase detection autofocus), and the primary also features OIS for stabilisation.

Oppo takes image processing and colour seriously, too, hence the development of its own MariSilicon X neural processing engine and its partnership with Hasselblad. The end result of all this is generally strong results from all three cameras.

In good daylight, all three cameras can produce sharp images with lots of colour and contrast, with well-balanced highlights and shadows. The one thing we did notice, however, was that the ultrawide seemed to white balance differently to the primary camera. In certain situations, we found that the ultrawide would produce shots that were tainted yellow and ended up being overly warm. And because the ultrawide is used as the macro sensor for macro mode, all our macro shots were generally this way, too -especially indoors. For outdoor shots in daylight, it wasn’t that obvious.

Macro mode is automatic by default, as well, which is both good and bad. Shooting with the primary camera, it automatically kicks into macro mode if you get close to an object – and that means it switches lenses and you’ll have to line up your shot again. Still, it is useful – it can get you sharp images and highlight details and textures you might not see when shooting regularly.

As for the zoom camera, the fact that it’s only 2x optical is a little disappointing. We’d have loved to see something over 3x optical so that it had parity with the iPhone 13 Pro, say. Even at 2x zoom, though, the phone can produce sharp, nicely balanced shots in good light. It doesn’t go overly heavy on the contrast and lose colour, either, as we’ve seen in some.

However, once you push past the “optical” range, and try the zoom at 5x, 10x and 20x, the detail goes fuzzy and smudgy very quickly. It’s best not to use those lengths, and just stick to 2x.

At night time, the camera will automatically shoot in ‘Night’ mode when you point and shoot now, so you don’t have to go hunting for the dedicated mode in the options. If there’s some light around – like street lights, a candle or a dimly lit bulb – it can produce quite nice images, lifting colour and light.

However, we’ve found that it doesn’t seem to draw in as much light as some other phones we’ve used. The darker scenes, or shadowed areas of lighter ones, tend to look very noisy and blurry.

As for the selfie camera, we were really impressed with the results. Even with some pretty extreme backlighting, with the sun being directly behind us, the HDR was very effective. It completely balanced out the sky while retaining good detail and colour on our face. So, instead of a completely washed out sky, it was vivid and blue with good cloud definition. 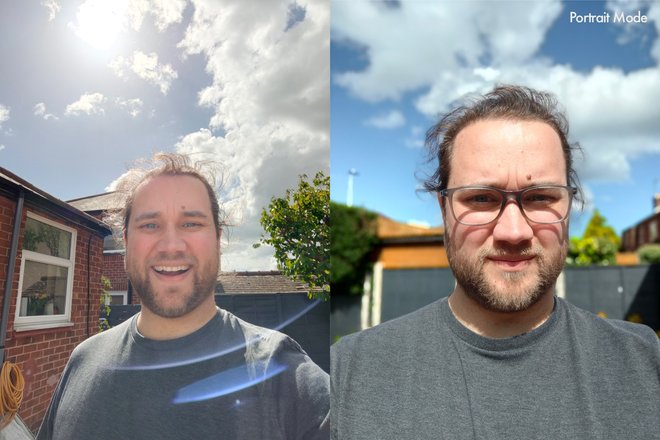 Similarly, edge detection was strong in portrait mode. Even with stray hairs poking out all over the place, the front camera results were natural.