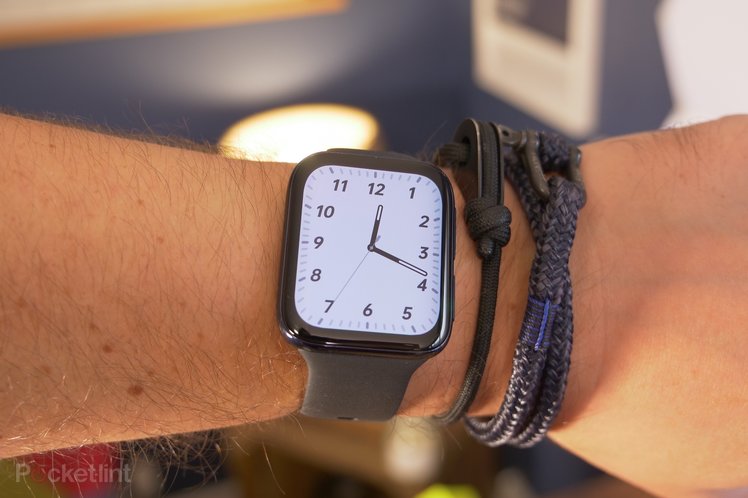 For years Google Wear OS watches have been round in shape. That traditional watch look has been a big draw for smartwatch buyers, particularly with fashion watch brands (mostly from Fossil Group) building watches that look and feel just like watches should.

Despite that, round screens don’t necessarily make the best platform for apps and text fields that appear on screen. After all, it’s harder to get a lot of information on a display that gets narrower at the top and bottom, and so a square screen actually makes a lot more sense from that point of view.

The Oppo Watch is one such square-screened device. The question, then, is whether being this different shape acts as enough of a draw?

Getting the elephant out of the room as quickly as possible: yes, the Oppo Watch looks a lot like a certain Apple-branded series of smart wrist wear. Of course, it’s not exactly the same, but if you glance at the Oppo from a distance then you’d likely assume it was an Apple Watch. Even some of the watchfaces are strikingly similar.

There are of course differences to point out. For instance, the glass on the front of the Oppo slopes down towards the left and right edges more noticeably – so it doesn’t have the completely even rounding around all four sides. It’s quite a long/tall display too, which means this 46mm model is going to be too big for smaller wrists. 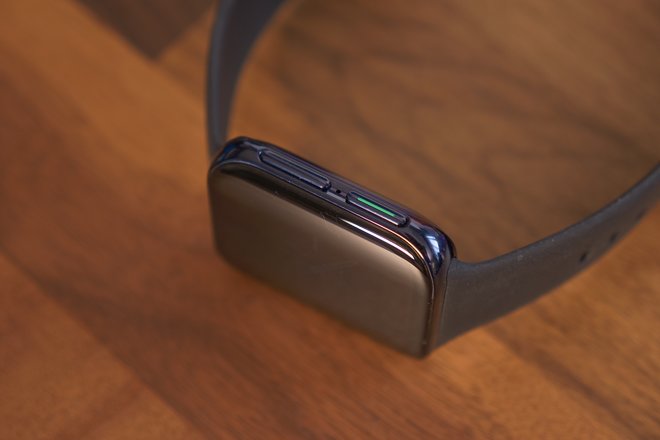 Just like an Oppo phone the Watch also has very slim and long buttons on the side – with one of these featuring the company’s trademark green accent. These buttons are housed in the side of a very glossy metal case, which in this instance is a midnight blue colour, complimenting the black glass on the front and the matte black silicone strap.

The watch itself is comfortable to wear for long periods, thanks to being quite lightweight, and the silicone band has just the right amount of stretch and grip to keep it in place without needing to be over tightened.

On the underside you’ll find Oppo’s take on heart rate monitoring. It’s an attractive setup, with five sensors/LEDs arranged symmetrically inside a glossy dome, with four contact points for the charging base underneath that. You also get a pill-shaped button on the top and bottom sides for releasing the strap. 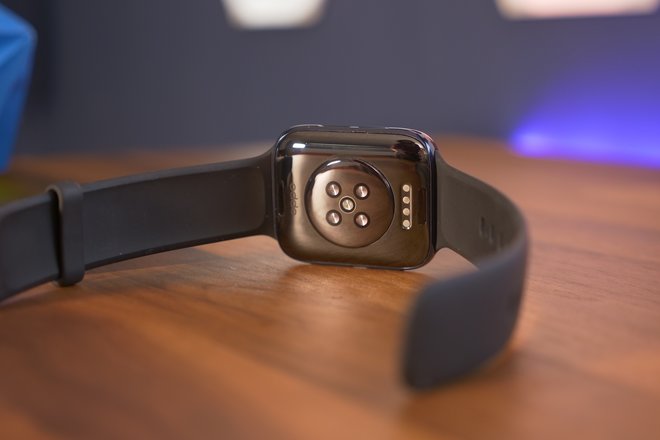 It’s a little fiddly to get the strap halves removed, but it’s a method that makes a lot of sense from a visual perspective. It gives the strap the look of being a deliberate, seamless part of the watch’s design. With the button pressed in, you simply pull the corresponding strap half off the case to conveniently reveal the two catches that hold it in place.

But it’s also hugely inconvenient, purely because actually getting hold of additional band styles or new straps with this proprietary connection point is not the easiest of tasks. Oppo’s UK store doesn’t even seem to have additional first-party bands to choose from. And looking for third-party options usually leads to inexpensive unofficial ones from stores that we don’t necessarily have huge confidence in.

We think if Oppo is has gone to the trouble of creating this strap removal system, which is quick and easy, then the company also needs to give an appealing reason for customers to want to do that. And the only way to do it is to offer multiple materials and finishes of bands to go with the watch, which in the Western market don’t seem to exist.

Wear OS, but with Oppo flavour

With its own take on Google’s Wear OS platform, Oppo has full taken advantage of the additional screen space offered by its square panel. For instance, launching the apps screen reveals a 3×3 grid of small round icons, which you can scroll up and down through. That means nine app icons fit in one screen at a time without the awkward, curved list of maybe three or four that you get on round screens.

Similarly, dropping down the settings tiles from the top of the screen gives you nine easy icons with tap-to-activate features such as torch, do not disturb mode, Google Pay, find my phone, or access to other everyday settings. 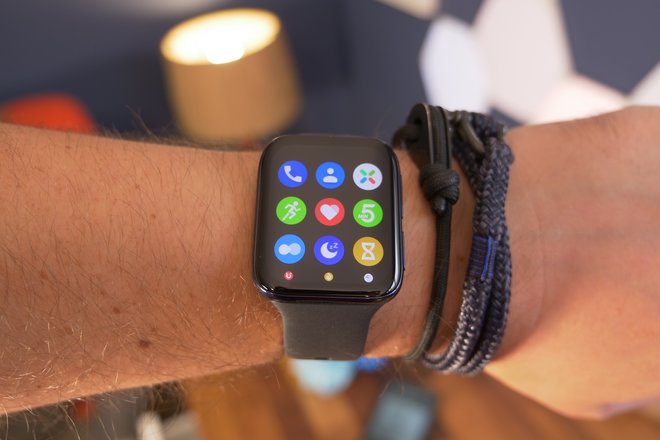 Of course, it’s still very much Wear OS platform, so swiping left on the home watch face goes to your full screen widgets for tracking things like your heart rate, daily activity, or sleep. Swiping right goes to your Google Home Screen with useful shortcuts and updates. Swiping up goes to your notification – and, again, because it’s a square screen, you can see more text and more notifications clearly.

Want to install wearable apps? Easy. Just tap the Google Play Store icon in the apps list and you can find anything in there. Which – when it comes to fitness and health (which we’ll get to it in a bit) – is kind of necessary. There’s even NFC and support for Google Pay, which is accepted in a lot of retail locations and supported by a good number of banks these days.

All of this is displayed on a 1.9-inch curved AMOLED panel which is bright and vivid. It’s worth noting that the smaller 41mm model has a flat 1.6-inch display. Either choice is easy to see outdoors in daylight, while the always-on feature means you can glance and see the time whenever you like. The always-on display option does drain more battery, and switches off your tilt-to-wake functionality, but it gives a more natural watch-like experience.

Modern smartwatches are essentially fitness trackers with fancy screens, in the form of a watch. It’s the fitness and daily activity tracking element that makes one a worthwhile investment. It’s where a number of Wear OS manufacturers fall down, though, and why having an ecosystem of third-party apps is needed.

Oppo has built its own fitness tracking platform, however, which does offer all the essentials. It’s called HeyTap Health and it collects information from you including daily steps, estimated calories burned, your daily heart rate averages, and can show you how you slept the night before (providing you wore the watch to bed).

It’s quite basic in terms of how it displays the data though. There’s not a lot you can dive into, although if you’re tracking a run with it, you do get to see useful metrics like distance, pace, heart rate, elevation and cadence. And it does seem pretty much on par with our other trackers in terms of location and data consistency.

If you’re into anything other than running, walking, cycling or swimming, you’ll not be served at all by Oppo’s fitness tracking options. Those are the only four workouts you can utilise, and so you’ll need to look at a different watch if that’s what you need.

There’s also Google’s own fitness tracking, Google Fit, which can also track the basics throughout the day. It’s neatly organised to show you how you’re doing versus your heart points and steps goals, while also showing easy-to-understand graphics for any workouts you’ve done. Run sessions, as an example, show up in the smartphone companion app as a neat map graphic with the route lined in blue. You also get to see your heart rate, weight and sleep duration in compact cards.

On the whole, the Oppo Watch is a strong performer. We weren’t left waiting for ages for apps to download from the Play Store. Animations are relatively smooth and fluid, and apps load quickly enough.

The one area where improvements are needed – as with many smartwatches – is battery life. In our testing, with the always-on display switched on (showing a low power black and white watch face), and with the ’tilt-to-wake’ feature enabled (so we didn’t have to keep tapping the screen to wake it up properly), the watch gets through a full charge in less than two days. Realistically, then, that means charging it every night, which isn’t great – but then the Apple Watch is much the same.

It’s worth noting, this is without the 4G/LTE connection enabled, just using it as a regular smartwatch connected to our phone for notifications. Even on days where we didn’t do any workout tracking, it didn’t have enough juice left to make it through a full second day, which means sleep tracking being a feature is approaching pointless. 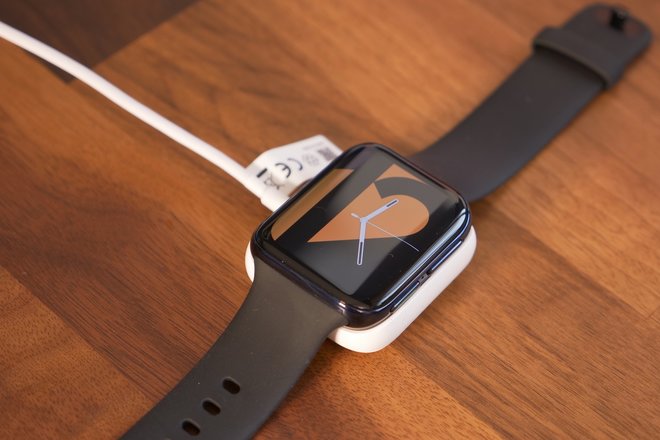 To charge it Oppo has designed a magnetic snap-on cradle which uses those four contact points for charging and not a wireless charging method. That’s both good and bad, like a few of Oppo’s choices on this watch. It’s good, because it’s quicker than typical wireless standards. It’s bad because the charging cradly is quite clunky and can be a inconvenient, if only because the plastic build is quite light and the magnets aren’t especially strong.

Practically speaking that sometimes means it’s tricky to get the watch lying on the cradle completely flat, but also that if it gets knocked it can detach quite easily. On the plus side, it does have some quite grippy silicon padding around the hole in the centre to help it not slip quite as easily once you do get it resting completely flat on a surface. But we often found ourselves double and triple checking it was stable and in position before leaving it to charge.