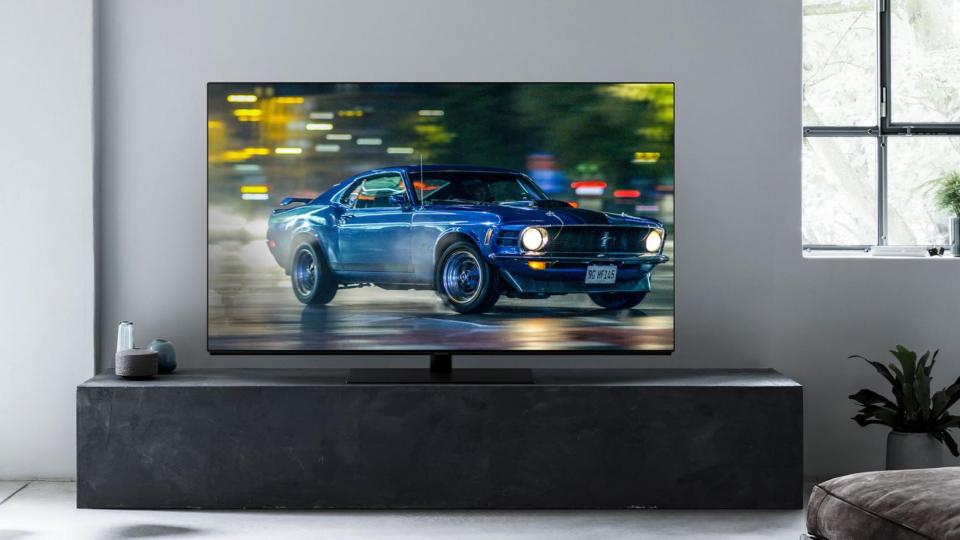 Panasonic does it again – the GZ950 delivers refined, big-screen OLED magic without costing the earth

DEAL: Panasonic’s GZ950 is out of stock online. Why not buy the incredible LG CX OLED instead?

The discontinued 65in Panasonic 65GZ950 has finally disappeared from the shelves of online retailers, and you may well be wondering what OLED TV to buy instead. Look no further than the stunning new LG CX 55in, which is currently on sale at Currys PC World for £1,299 – £500 off its RRP. It’s the best all-around OLED on the market, with outstanding HDR playback and comprehensive HDMI 2.1 support for next-gen gaming.Currys PC WorldPrice when reviewed: £1,799Price now: £1,299Buy Now

Our original review continues below:

Panasonic seems to enjoy making life difficult for itself. Last year’s FZ802 confidently staked out its position as the de facto class-leader for colour accuracy – and that was before we even bothered to fettle its factory-fresh settings. It was a true OLED champion through and through; the kind of TV that’s tough to improve upon.

Yet the latest addition to the Panasonic family isn’t merely content with improving on near-perfection. The GZ950 is dead set on delivering turbo-charged OLED thrills for less than any of the competition.

Panasonic GZ950 review: What you need to know

Two screen sizes are available, namely the 55in Panasonic TX-55GZ950B and the 65in TX-65GZ950B which we have for review here. Both feature an OLED panel with a UHD resolution of, you guessed it, 3,840 x 2,160 pixels, and both are blessed with the Japanese brand’s latest HCX Pro Intelligent processor.

By far the biggest upgrade over last year’s Panasonic FZ802 and FZ952 is the addition of Dolby Vision and Dolby Atmos support. This means the GZ950 is the first television we’ve tested to support all four major HDR formats: HDR10, HLG, HDR10+ and Dolby Vision.

The onboard Smart TV platform – now called My Home Screen 4.0 – offers the usual video-on-demand apps such as Netflix, Amazon Prime Video and Youtube, and all of them feature HDR support. In the UK, you’ll also get Freeview Play which provides access to all the major UK catch-up TV services including BBC iPlayer. 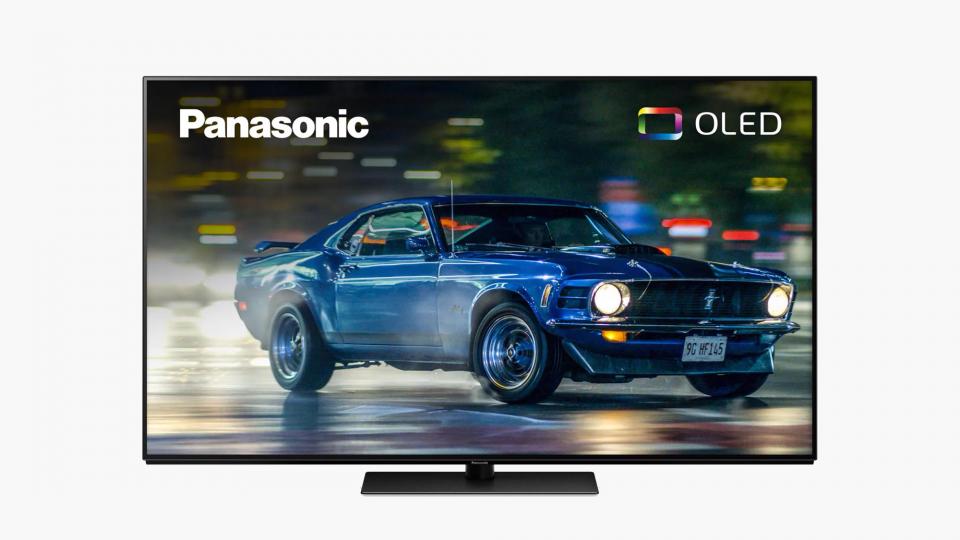 The design of the Panasonic GZ950 is unapologetically simple. The OLED panel has an exceedingly thin bezel and sits atop a rectangular stand which doesn’t take up much space at all.

The hollowed-out pedestal column is equipped with hooks to help with cable management, and attachable plastic covers are provided to achieve a cleaner look. Although the 3-metre power cord is fixed to the panel, it’s long enough to give plenty of scope for placement.

The connections are found on the left rear of the display, including four full-bandwidth HDMI 2.0b ports. These ports only support one HDMI 2.1 feature, however: Auto Low Latency Mode (ALLM) automatically kicks the TV into low-latency game mode when it detects a signal from a compatible games console.

The supplied remote control is more functional than attractive. The rubber keys feel a bit spongy and imprecise, and give little in the way of tactile feedback. Thankfully the onboard Smart TV platform is responsive enough to keep the user experience feeling slick and responsive.

The GZ950’s Dolby Atmos-compatible internal speakers are surprisingly capable, though. They reach a decent volume, pump out a good amount of bass, and dialogue clarity remains impressive, too. You can also hook up a subwoofer to the headphone out socket to enhance the bottom end even further. 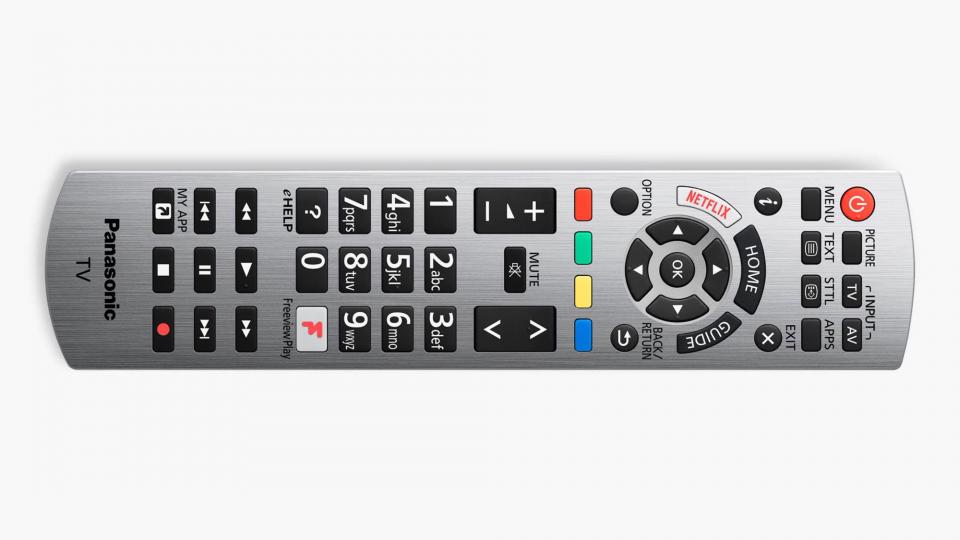 OLED has become synonymous with inky blacks, vibrant colours and wide viewing angles, but it’s not perfect. Towards the end of last year, we discovered that a number of 2018 and 2019 OLED TVs exhibited flashing or flickering artefacts in very dark scenes – and particularly with heavily compressed content from streaming services. The great news is that Panasonic’s range of OLEDs is completely free from such issues, and produces some of the cleanest near blacks among any of the OLED TVs currently on the market.

And as we’ve come to expect from Panasonic, the GZ950 OLED delivers class-leading colour accuracy. We just so happened to have a £35,000 Sony BVM-HX310 reference mastering monitor in our test room during our review period, and our TX-65GZ950B review sample matched up extremely well in terms of colours (including skin tones) after calibration. In all honesty, it’s so good that it could probably pass as a client reference monitor. What’s more, the Netflix Calibrated Mode is spot on – it’s equivalent to the most accurate Professional 2 and Dolby Vision Dark picture modes for SDR and Dolby Vision programmes respectively.

Motion performance improves on last year’s FZ series, but there’s still room for improvement. Let’s start with the good news: slow panning shots in 24fps SDR movies are presented smoothly without any sign of judder, and there are numerous settings you can adjust to improve motion clarity without incurring interpolation artefacts or ruining movies with an overly-smooth soap opera effect.

Where the GZ950 stumbles occasionally is during playback of 24p HDR movies: we noted occasional but consistent frame skips in scenes with moving faces or smoke. To be fair though, Panasonic has dramatically reduced the frequency of these HDR frame drops on the GZ950 compared with the FZ802 or FZ952. So much so, in fact, that most owners could probably watch several movies back-to-back without seeing frame skipping even once.

Brightness uniformity is excellent, with no sign of banding and dirty screen effect. Stare at a full white screen long enough and the centre does look a touch warmer, but it’s not evident in real-world viewing. And similarly, although no consumer OLED (and that includes the Panasonic GZ950) is completely free of thin vertical streaks in our almost-black test slides, it didn’t bother us at all in real-life content. 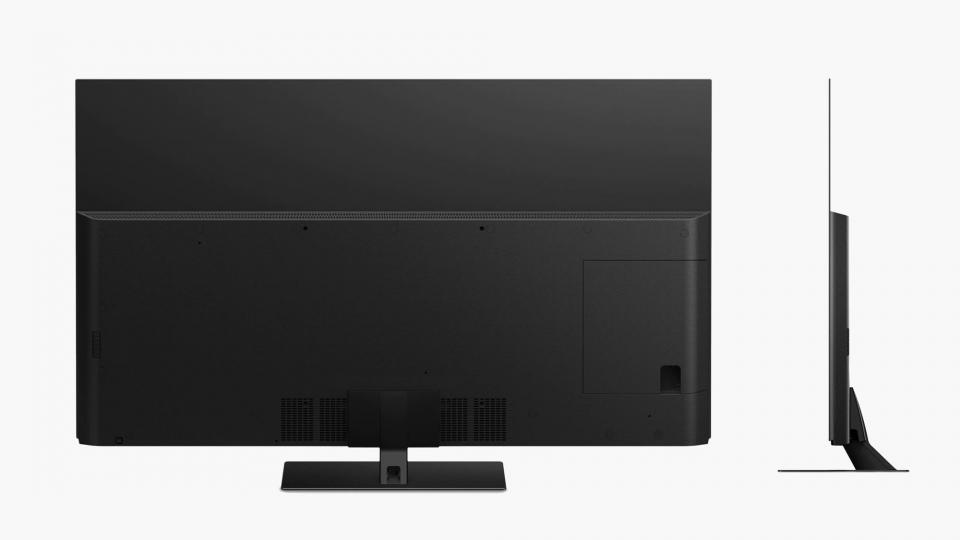 Video processing is superb overall. The GZ950 does an impressive job of retrieving sharp detail from sub-4K content, even if it does do so with tad more ringing and fizziness than the very best upscalers. Unlike LG’s and Sony’s 2019 OLEDs, though, the Panasonic GZ950 doesn’t offer a decontouring filter, so you’ll just have to put up with the odd bit of posterisation (a blotchy effect on subtle colour transitions such as skies or painted walls) in content which suffers from the issue.

In other areas, the GZ950 hits all the right numbers. For HDR, the DCI-P3 colour gamut coverage comes in at 98%, and after calibration we measured a peak brightness of 700cd/m2 on a 10% window, and 160cd/m2 across the whole screen.

Given the GZ950’s various talents, HDR looks pretty special. However, it’s good to see that Panasonic has equipped the GZ950 with dynamic tone-mapping, as it’s a feature which boosts the brightness of specular highlights without affecting the overall brightness of the image – it’s a great way to eke more punch out of HDR content.

On that note, the GZ950 also appears to use a TV-led Dolby Vision profile similar to that found on LG OLEDs, instead of the player-led or low-latency version implemented on Sony TVs. The result is exactly as you’d expect: the Dolby Vision presentation on the Panasonic GZ950 looks as bright and impactful as on LG’s 2019 OLEDs.

Input lag isn’t quite as low as the very best, but most people’s reflexes simply won’t be fast enough for it to matter. The GZ950 has 22ms of lag in both 1080p SDR and 4K HDR Game modes, which is some way slower than the 13ms achieved by LG’s 2019 OLED TVs, but still not slow by any means.

As mentioned earlier in this review, Auto-Low Latency Mode (ALLM) has also made the grade. Start a game on a compatible console such as the Xbox One X and the GZ950 will automatically engage game mode in whichever picture preset you’re using. Due to limitations of the chipset, however, the GZ950 doesn’t support Variable Refresh Rate or VRR, which is something of a shame.

Panasonic has delivered the goods: the GZ950 is a more than worthy successor to the wonderful FZ802. It’s markedly better than last year’s critically-acclaimed model, delivering class-leading colour accuracy in both SDR and HDR modes, and the addition of Dolby Vision support delivers the kind of bright, impactful HDR performance we simply love to see.

That’s not all, however. Panasonic’s engineers should be congratulated for ensuring that the GZ950 resists the near-black flashing or flickering artefacts which afflict various rival OLEDs, even with test slides designed to aggravate the issue. Colour us impressed.

It’s the price which seals the deal, however. With a launch price of only £2,499, the 65-inch GZ950 storms to the top of our wish list. It’s a top choice for anyone looking to buy a first-rate OLED TV without breaking the bank.