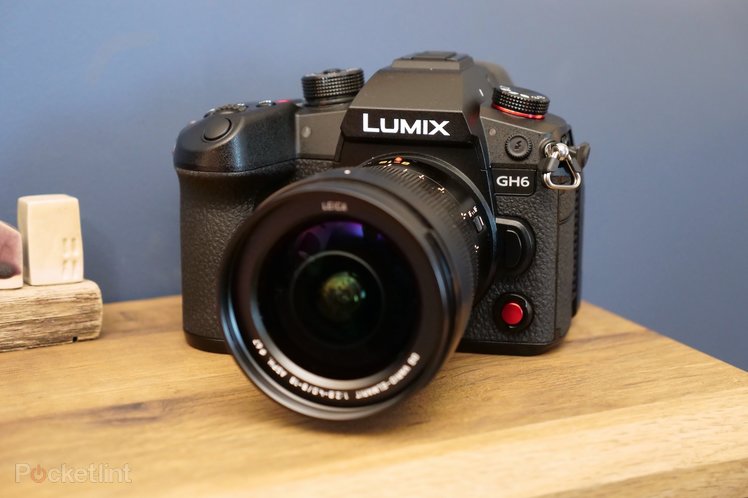 Panasonic has championed the Micro Four Thirds format for many years, growing its potential, increasingly focusing on delivering highly capable videography tools for the quality-focused enthusiast. And its Lumix GH series has long been top of that stack.

Back in 2014 the Lumix GH4 was one standout moment in the history of 4K video recording, making the Ultra-HD format available to a new audience. That was followed up by the even more advanced Lumix GH5 in 2017, which then spawned a Mark II sequel in 2020.

For 2022 and beyond it’s all about the next generation: the Lumix GH6. This camera is really all about videography, combining some serious shooting specs at a very competitive price point.

But does it make the most sense when the GH5 M2 was released not long prior? In a word: yes. Here’s why we think the Panasonic Lumix GH6 has the potential to make even more expensive cameras from the likes of Sony and Canon glance nervously over their shoulders.

The GH6 essentially looks like a GH5 and an S5 got together and spawned a new model. It still has some of the design elements of the older GH models, but it’s bulkier, more angular, with bolder protrusions. 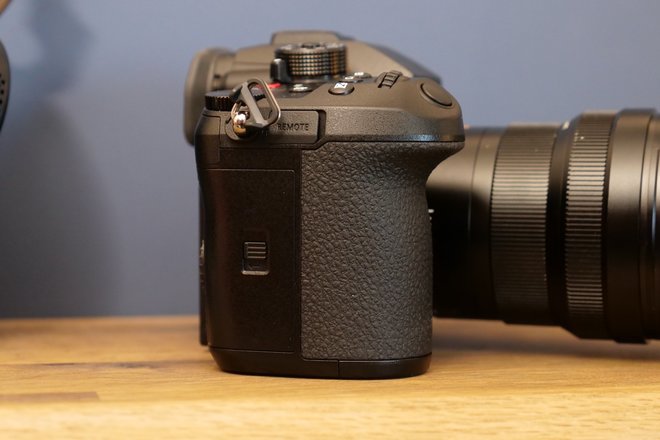 It’s bigger too, which any GH5 users will immediately notice when first picking it up. The handgrip on the front is much larger, too, giving you something much more substantial to hold onto when shooting handheld. This is partly because the battery compartment has been rotated 90-degrees, so the battery fits within the grip rather than entirely within the main body of the camera. It’s coated in a textured, rubberised material to ensure it doesn’t slip.

The other new feature is the air vents, as there’s a fan inside to ensure the GH6’s sensor can keep cool for unlimited recording. One vent sits on the left side of the camera, between the monitor hinge and the connectivity ports. The other is visible beneath the monitor’s backplate, next to the dials and function buttons on the back of the camera. Panasonic tells us this air-cooled system was necessary to prevent the camera’s size from being yet bigger. Not that it’s a massive camera by any means, it’s just larger than its predecessor.

The GH6’s body is also splash- and dust-resistant, feels really sturdy, and ought to be more than capable for fieldwork. 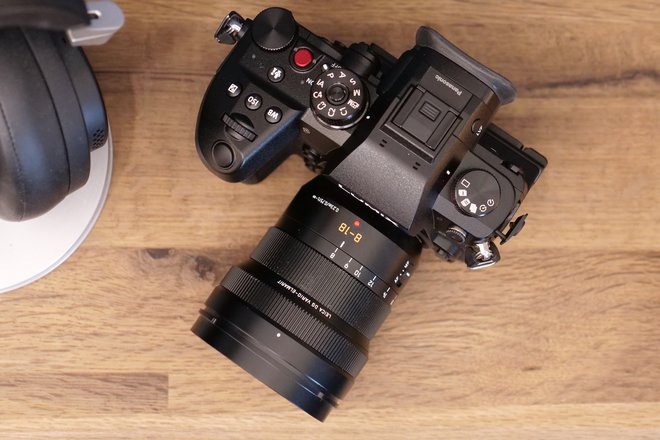 Anyone who has used a Lumix before will also find the buttons and controls immediately familiar, with everything conveniently placed and easy to reach. Up top there’s a bright red movie button for recording video, which really stands out as a feature to let you know what this camera is all about.

On the front of the camera between the grip and the lens are two custom function buttons, which are really well positioned. We found we’d naturally find them with our index and ring finger on our right hand. They’re not too easy to press accidentally, requiring some significant travel before activating, but using them becomes second nature.

More important is the presence of a second (also bright red) movie record button on the camera’s front. It’s really useful to start recording if your right-hand fingers and thumb are busy doing something else, or you can’t easily reach the movie button on the top. It’s easy to find, so means it’s much easier to keep your shot stable and still. 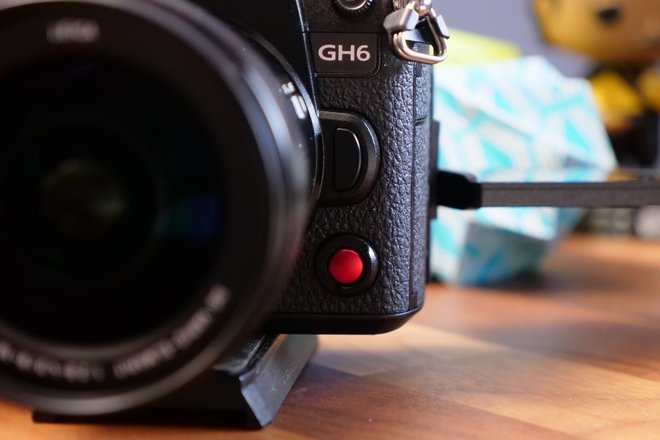 On the rear are all the usual dials and buttons for navigating settings menus, including a mini joystick for help with focusing and selection. There’s also one new button: a lock switch, which sits to the left of the viewfinder. Switch this on and it locks all the buttons on the camera, so your recording can’t be disturbed or changed accidentally.

Ports, slots and the flip-out screen

Like most cameras, the important ports of the GH6 are protected by a number of doors and flaps. There’s a 3.5mm microphone port, a 3.5mm line out for headphones, a USB Type-C port for charging, plus a full-size HDMI output.

Along with the shoe mount on top of the camera, it means you can plug-in all manner of recording equipment. In fact, the camera is capable of four-channel recording if you use a dual-XLR connector (sold separately) along with the built-in mics and the 3.5mm input. 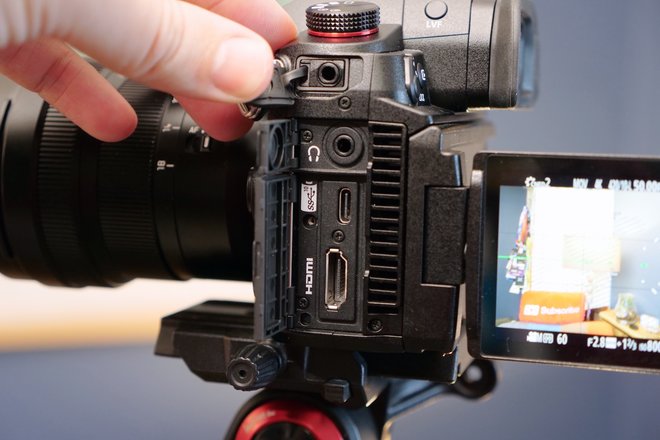 You can also plug in an external monitor/recorder and record directly to that. Plus, in a future firmware update, Panasonic is going to enable direct SSD recording through the USB-C port. At the moment, however, its uses are limited to charging and file transfer. It’s not the only method of file transfer though: using the mobile app, you can import files wirelessly using Wi-Fi/Bluetooth too.

As for memory card slots, there are two: one CFExpress (Type B), one SD. We’ll certainly say this if you intent to buy the GH6: you’ll need to make sure you buy really fast cards to make the most of it, otherwise you’ll be unable to access to highest possible recording quality. To get 5.7k Apple ProRes, for example, you’ll need a CFExpress card, as SD just isn’t fast enough (but is fine for many lesser settings). 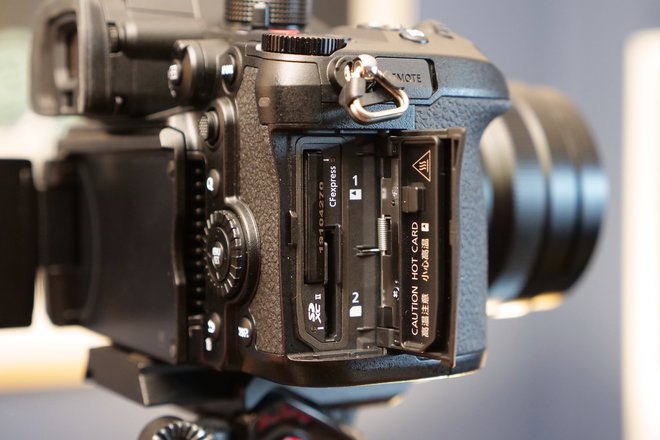 Then there’s the screen. Like any good video-focused camera, it can flip out to the side of the camera, and rotates about 225 degrees. That means you can have it facing you if you’re recording yourself to camera, or have it rotated perpendicular to your subject if you’re shooting top-down.

We could fill an entire page just on the different variants of 4K resolution the GH6 can record in, listing all the various bitrates, frame rates and codecs. But the broad strokes view is that there are few cameras on the market capable of matching the resolutions and bitrates on offer from this Lumix. Certainly not in the consumer market in this price bracket anyway. To save you from a spreadsheet of nightmares, here are a few key highlights:

In our European review unit, the frame rates are slightly different and are, essentially, multiples of 25. That means the highest frame-rate 4K is 100p, rather than 120p. And the highest 5.7k is 50p, rather than 60p. There are also settings with variable frame-rate options for speed ramping, and high frame-rate modes for slow-motion.

In both Cinema 4K (C4K) and 4K modes there are 60p/50p modes that clock up 800Mbps, meaning you’ll see your memory card empty in very little time at all on those as well.

External recording is possible on a lot of these frame rates when you’re using monitor/recorder devices plugged into the HDMI port. In fact, in some 4K and C4K modes, you’ll be able to record externally and internally to a card at the same time.

The good thing about all of these frame rates and bitrates is that you’re not limited by recording time in any of them. Although many of the really data-intensive modes will require you to use a CFExpress card the actual recording time is only limited by the capacity of the card and the camera’s battery life.

The GH6 doesn’t crop into the sensor either, unless you opt to use one of the 4:3 Anamorphic modes, so you’ll get focal lengths as expected to your lens choices.

Those who really like to tweak their work in post will be pleased to know the camera offers full V-Log right out of the box, with no additional charge (for the GH5 it was an added cost is all). There are other profiles, including Cinelike D and V, plus HLG for those times you want to capture HDR footage. There’s even a setting called ‘Dynamic Boost’ you can enable which really enhances that HDR effect to give you dynamic range that hasn’t been possible before on a GH camera.

If you’ve used a GH camera before then the GH6’s operation will feel very similar. There are a few minor differences, most notably in the user interface on the flip-out screen. Menus are arranged slightly differently, and are chock-full of options and settings to tinker with. It can be confusing to begin with, but it doesn’t take long to find all the important bits. 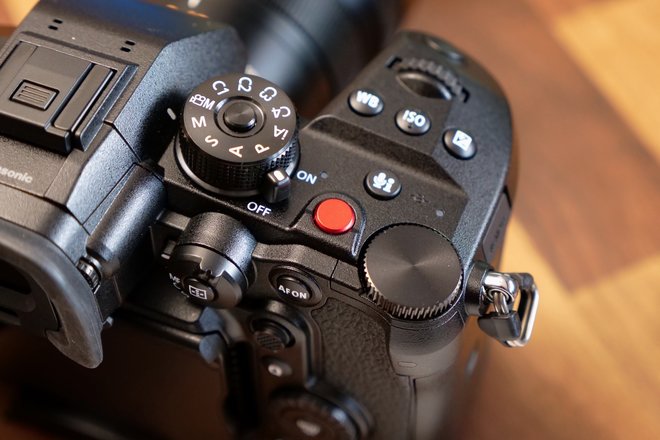 Using autofocus in stills or video mode reacts quickly, locking onto the subject intended, or easily adjusted by the tap of the screen. It can also be changed to an eye/face tracking feature, too, allowing the camera to automatically detect when a person or animal is in the scene. We found this mode pretty reliable, so we rarely found ourselves needing to reshoot.

The GH6’s improved sensor and image processing engine certainly seems to have made a big difference over the GH5 too. Looking at video shot in the same conditions, with the same lenses, at the same settings, there’s a sense with the GH6 that the overall look is far more lifelike. The automatic shooting mode delivers results that are more realistic, yet with vibrant colours, but more crucially a better handling of light and shadow.

In-body stabilisation ensures that your movements rarely affect the video or stills badly too. The 5-axis system ensures that movement, when it happens, is relatively smooth. Of course, it’s not gimbal smooth, but any shakes and jolts are minimal enough that most editing suite programmes’ own post-production stabilisation tools are enough to even them out without much in the way of warp.

Battery life is solid too. The GH6 can handle around 45 minutes of stop-start recording, more than an hour of continuous 4K recording, or somewhere around 350 still images on a full charge. We found no instance of feeling as though the battery level was dropping too quickly during testing.

Spec-wise, it’s the same battery that’s in the full-frame Lumix S5, which charges relatively quickly even if you plug it into the USB-C port, thanks to Power Delivery support.