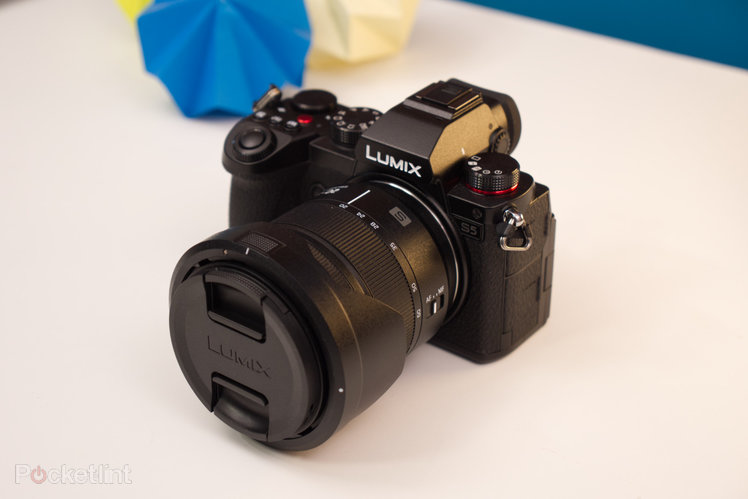 Video-focused mirrorless system cameras have become all the rage in recent years, and the progress in the market showed no sign of slowing down when Panasonic announced its smallest yet full-frame camera: the Lumix S5.

The S5 is a lot like a Lumix GH5 with a bigger and better sensor, or the Lumix S1 with additional video smarts crammed into a smaller body. Indeed, its a potentially mouth-watering prospect that could, to some degree, end the appeal of Micro Four Thirds (MFT). After all if – like the S5 – you can cram in a proper full-frame sensor and high-end capture capabilities into a body that’s smaller than an MFT, why would you want anything else?

We were sent the Lumix S5 to test, complete with the 20-60mm f/3.5 – f/5.6 kit lens, so all of the video samples and photos posted in this review were captured using that combination. And what a combination it is!

There’s a lot to like about the design approach on the S5. The camera has that attractive angular design that we’ve come to expect from full-frame cameras. It’s noticeably flatter and sharp looking than the comparatively rounded shape of the GH5. Size-wise, it’s not far off being the same as its Micro Four Thirds cousin, but in the hand it does feel similarly lightweight and balanced. 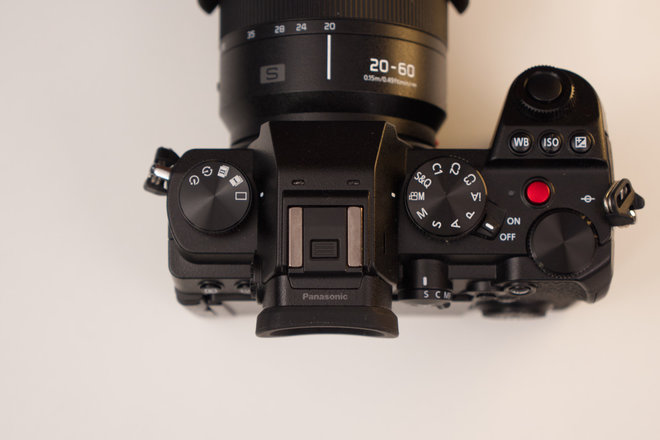 It’s a similar height to the GH5 too, but has a much larger grip on the right side, which makes it easy grab hold of when shooting handheld. Thanks to the position of the red video button up top, it’s super simple to grip it with all four fingers and reach over with a thumb to press record, or even to capture a photo using the shutter key.

Overall build feels solid, despite its relatively lightweight-ness. That’s thanks to its chassis being built from a magnesium alloy. Plus it’s sealed against splashes and dust ingress too, so you know it’s unlikely anything can get inside to destroy the electronics or get on to the sensor.

We love little design touches, such as that bright red movie button, which matches the red-accented ring beneath the burst/photo dial on the left. The textured edges on the dials looks good and makes it easy to jog the dials with a single thumb. All of the click and feedback just the right amount to reassure that you’re using a quality piece of kit. As does the shutter button when you press it in to take a photo.

If you’ve used a Panasonic Lumix camera before, you’ll be more than comfortable switching up to the S5, thanks to a very familiar button and dial layout. There are some differences, but none that tarnish the experience, and it soon becomes second nature. For instance, the shutter button is encircled by a rotating dial for adjusting the aperture in manual mode, rather than as a dial built-in to the top of the grip behind the shutter button (as per the GH5).

Similarly, the shutter speed dial on the back is fully external, rather that built into a slit on the back. It joins the red video capture button on the top, as well as the shooting mode switch and power switch. Then there’s the familiar trio of buttons for white balance, ISO adjustment, and exposure compensation, all positioned behind the shutter button. 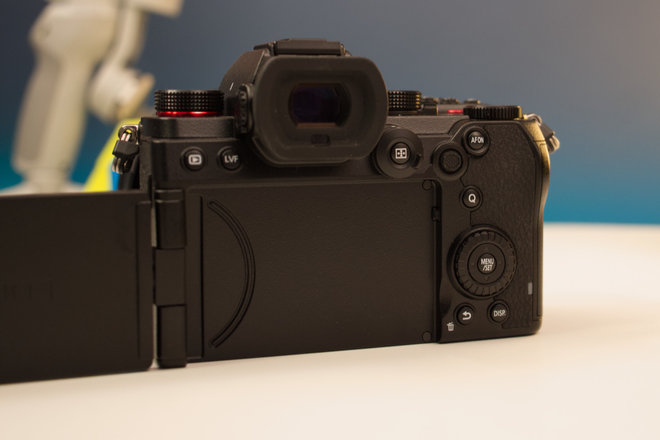 On the back, you’ll find a bunch of controls. There’s the usual menu/set button surrounded by a ring dial for controlling the onscreen interface when adjusting settings.

The small dial for switching between AC, AS and manual focus could be better designed. It lives to the right of the viewfinder lens, but we found the protruding tab (for want of a better word) a little small and hard to use. The directional joystick for moving the autofocus target is the opposite – it’s well-positioned and easy to reach with a thumb, even when staring down the barrel.

Then there’s the vari-angle touchscreen, which has been a mainstay on Panasonic’s video-focused cameras for a good few years. This screen flips out and rotates to face the front, which means you can see yourself clearly and use it as monitor when you’re filming bits to camera. Handy for YouTubers and vloggers. It’s sharp and colourful, plus it’s touch-sensitive, so you can tap to focus on various parts of the screen to adjust the autofocus aim.

Panasonic’s latest autofocus system combines contrast detection with DFD (depth from defocus), with an algorithm it says it has built from the ground up (and will be coming to other cameras later on). What’s interesting is what the autofocus algorithm can do.

It not only recognises faces, eyes and heads automatically, but can even stay focused on the person’s body. That means if you’re recording a video of a person, and their head turns away from the camera, it automatically switches its focus to be on the person’s torso/body and remains locked on.

Looking at the system do its thing through the viewfinder or on the screen and you can see it generating little rectangles around eyes and faces as you shoot video/stills. It works reliably and consistently.

As we’ve mentioned already, you can use a joystick on the back of the camera if you want to manually select an area of focus. This works well if you’re shooting close-ups of objects if you’re in auto mode, looking through the viewfinder and the automatic focus setting isn’t exactly where you’d like it to be. A quick jiggle of the joystick and a half-press of the shutter is enough to set it where you want it, and quickly too. You’re not left waiting or hunting for focus, even in low light.

When we tested shooting a 10 minute part to the camera, with the focus set to automatic, it was interesting to see how well the focus remained on our face, even with our inevitable movements forward and back while talking and close to the camera lens. The camera never seemed to be focus hunting much, which is great for the resulting footage.

Panasonic has gained a huge number of fans in the world of YouTubers, creators and videographers, thanks to its selection of relatively affordable and compact 4K cameras. It was arguably the GH4 Micro Four Thirds camera that kicked it all off, but the Lumix S5 feels like a culmination of all that evolution.

We could rattle on for days about all the various shooting codecs, resolution, bitrates and frame rates available, but instead, have a look at this chart instead, which covers all the details:

What it means you get a lot of flexibility in how you shoot. If you want top-quality 4K video at 60 frames per second, you can have it. Although, there’s a slight caveat here in that it crops into the sensor to get its highest resolution and frame-rate offering. That immediately becomes apparent when you switch between 4K60 and 4K30 within the camera’s menu system. It crops into the image quite a bit – from using the full width of the sensor to a space the size of an APS-C camera sensor.

Still, if you want full-frame video, switch it to 30/25/24p and you’re good to go. Plus, with the HLG/HDR mode switched off, you can record for any length of time without worrying about hitting the 30-minute limit you get on some of the more processor-intensive modes.

To use for shooting products in our office for the Pocket-lint YouTube channel, the S5 has been fantastic. For the most part it’s simply not lacking anything that we’d need. Plus, there’s the advantage that it’s small enough and light enough to carry around and – with the in-body stabilisation enabled – it’s a decent run and gun camera with fast focus and smooth footage.

That flexibility and versatility extends to audio too. You can use the 3.5mm input for microphones or wireless kits, plus there’s an option to adjust the mic settings so that it uses the camera’s power, in case you have a mic that isn’t self-powered. That’s more useful when using the XLR input adapter.

Like the photography mode – which you can read about below – we found it a strong low-light performer, even with the lens added to the front. That’s because of its Dual ISO feature. While you can get up to the heights of ISO 51,200, pushing it that high does lead to some pretty mushy results lacking in detail, but crank it down a notch and the noise suppression is quite strong.

For those who enjoy colour-grading – or need to, if they’re using the Lumix as a ‘B’ camera alongside more expensive professional-grade cinema cameras – you can even shoot in V-Log. Those who aren’t so happy with colour grading will find plenty of other picture profiles available, as well as the ability to create their own. For the most part, we stick with CineD, which offers that natural, well-balanced look without too much contrast.

Full-frame cameras are becoming a hit in the mirrorless market – primarily because that larger sensor gives you that bit more quality and greater depth of field. They’re better in low-light conditions and offer great dynamic range, and so as well as being a strong video camera, the S5 takes great photos too.

Shooting in good daylight produced detailed shots with strong colour reproduction. There’s no over-saturation of some colours over others. Greens look vibrant and yet natural, as do blues and yellows.

As we mentioned at the beginning, all of our photos and video were shot using the 20-60mm kit lens which – for a kit lens – is surprisingly capable and versatile. Shooting at 20mm gives a wide field of view – which is great when you need to grab a bit more of the surrounding scene while shooting something close up, or just grabbing an impressive landscape.

We found at 20mm it was also capable of focusing while very close to a subject – well, when choosing to shoot manual. Plus, we found it was able to create some lovely, soft bokeh background blur, giving that extra depth.

In low-light conditions the S5 is strong. We tested it through sunset/dusk, adjusting the ISO sensitivity and shutter speed to see what the impact would be, all completely handheld. Of course, once the ISO goes a bit higher (over 2500 or so), the image does tend to get a tad noisy. Dark blues in the skies look a bit grainy, but not terribly. It still retains its colour.

Shooting some light trails with the shutter speed set between 0.25-1 second, we were pleasantly surprised at the camera’s stabilisation capabilities, which killed any blur from our shaky hands.

Once you really start to crank up the ISO sensitivity, there’s a bit of mushiness evident. Shooting at ISO 25,600 led to some impressively bright shots at night, but at this point you start to see more image noise in the skies, and details within the image start to get a bit lost. But you still get a good amount of colour and the end result is more than passable.