The PCI Express, or PCIe, continues to remain a crucial part of computing devices. PCIe, which stands for Peripheral Component Interconnect Express, is one of the two main interconnects that allows you to connect various peripherals including GPUs, SSDs, capture cards, and more to your computing device. If you’ve ever built a PC before, you’ll recognize the PCIe slots running horizontally across your mainboard. If you haven’t been keeping track of PCIe advancements, then allow us to remind you that we’ve now moved to the fifth generation of PCI Express with the launch of Intel’s new Alder Lake platform. But what is PCIe 5, and how is it different from Gen 4? Also, do you really need to upgrade from PCIe Gen 4? Well, there’s a lot to unpack when it comes to PCI Express 5.0, so here’s everything you need to know about the new standard.

PCIe 5 is essentially just a new standard of the PCI Express that brings a set of advancements over the last one i.e. PCIe 4.0. PCIe Gen 5 is the next big thing for computer peripherals. You’re going to be hearing a lot of PCIe 5.0 in 2022 and beyond as Intel already has the Alder Lake platform to support it. AMD’s upcoming Ryzen 7000 series that’s said to arrive before the end of 2022 will also support PCIe 5.0. The preliminary specification of PCIe 5.0 was announced in 2017, but it was formally announced in May of 2019. 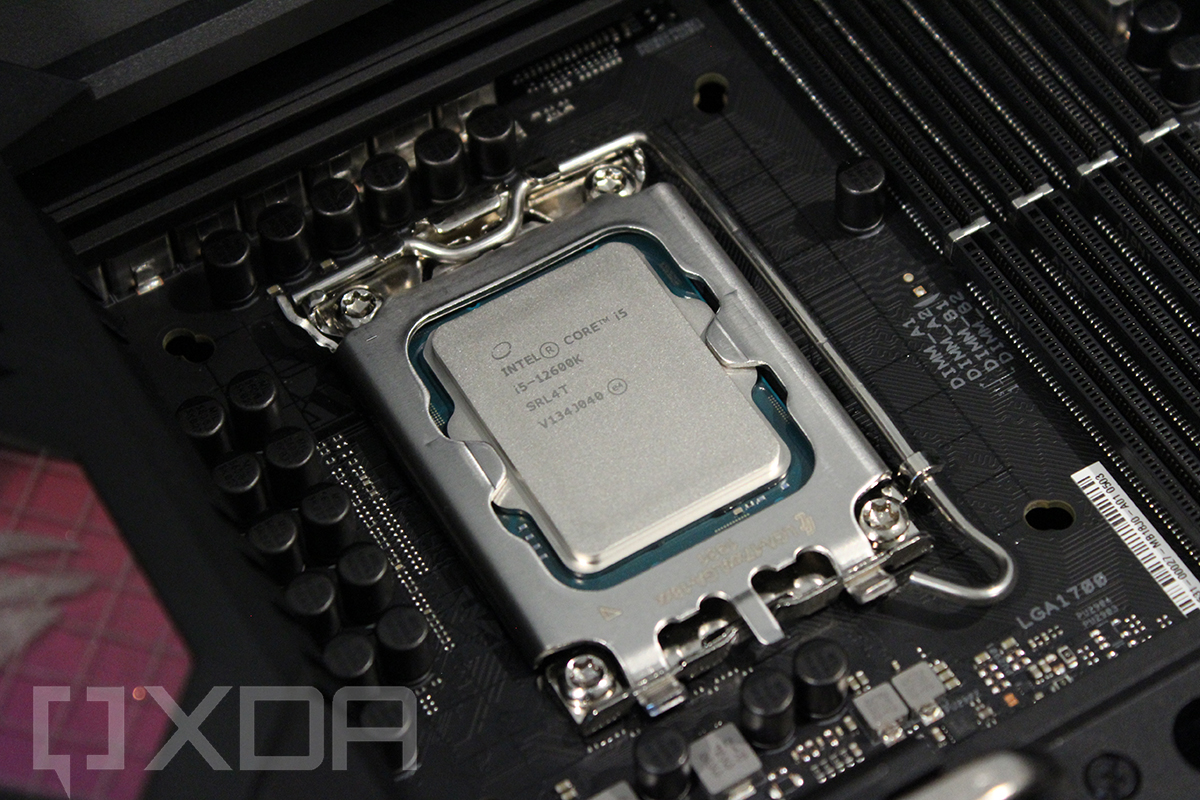 One of the main differences between each PCIe generation is speed and bandwidth. We’ve seen that with each passing generation and PCIe Gen 5 is also expected to bring massive improvements in those departments. PCIe Gen 1 kicked things off with a bandwidth of 8 GB/s and a transfer rate of 2.5 GT/s (gigatransfer per second). With PCIe 5.0, we’re looking at transfer speeds that are as high as 32 GT/s and up to 128GB/s bandwidth over an x16 configuration. This should give you an idea of how much the standard has evolved.

When it comes to PCIe 5.0 support on Intel Alder Lake, we’re looking at 64GB/s throughput across an x16 lane connection. The high-end AlderLake-S chips support an x16 PCIe 5.0 connection along with an additional x4 PCIe 4.0 connection. Another interesting problem that PCIe 5.0 is designated to solve is one of the biggest problems with the current graphics cards — power delivery. That’s right, they’ll actually be able to supply enough power for high-end graphics cards. The existing 8-pin connectors can only supply up to 150W each. That’s why you need two or sometimes even three of those connectors. The new 16-pin PCIe 5.- connector, however, will be able to deliver enough power. 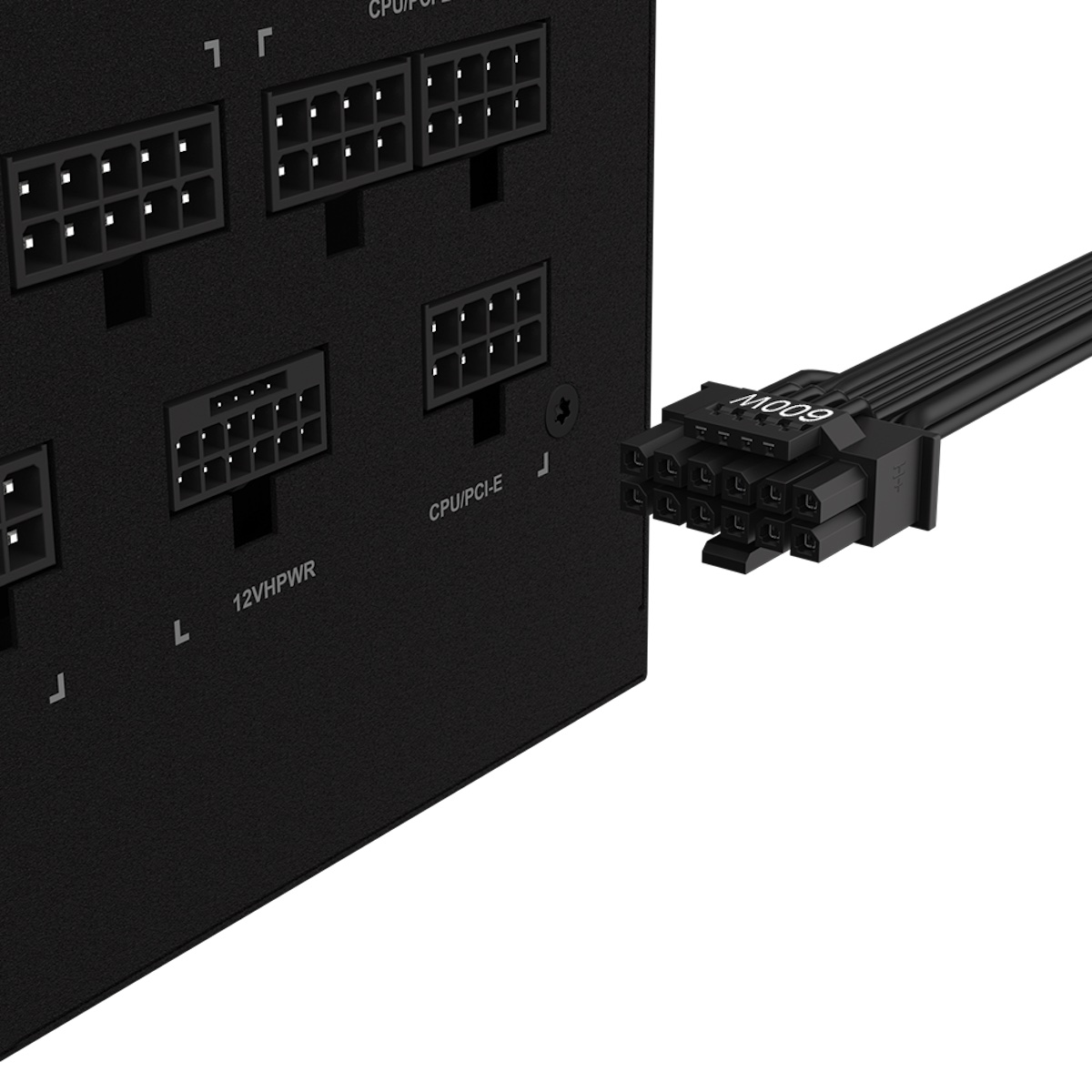 The PCI-SIG states that each pin in the main block can support up to 9.2A. That adds up to 55.2A for the entire connector, with a maximum supported power load of 662.4W. And with tolerances, you end up with 600W, which is plenty. We say plenty because even the most demanding Nvidia GPU out there, the GeForce RTX 3090, tops out at 350W. We also have PCIe 5.0 supported PSU on the market now that comes with the updated 16-pin PCIe 5.0 power connector. We’re not entirely sure if the new connector will be a requirement for PCIe 5.0 graphics certification, but we hope it is because of how compact and powerful it really is.

PCIe Gen 4 is the current standard that’s supported by a majority of processors and motherboards out there. This is also why PCIe 4.0 devices are also readily available on the market. When it comes to speed and bandwidth, PCIe 4.0 is also quite impressive. Each generation of PCIe, as we mentioned earlier, is twice as fast, and doubles the bandwidth as the predecessor. While PCIe 3.0 had a data transfer rate of 8 gigatransfers per second, PCIe 4.0 transfers the data at 16GT/s. That changes once again with PCIe 5.0 as it now hits 32GT/s transfer speed. 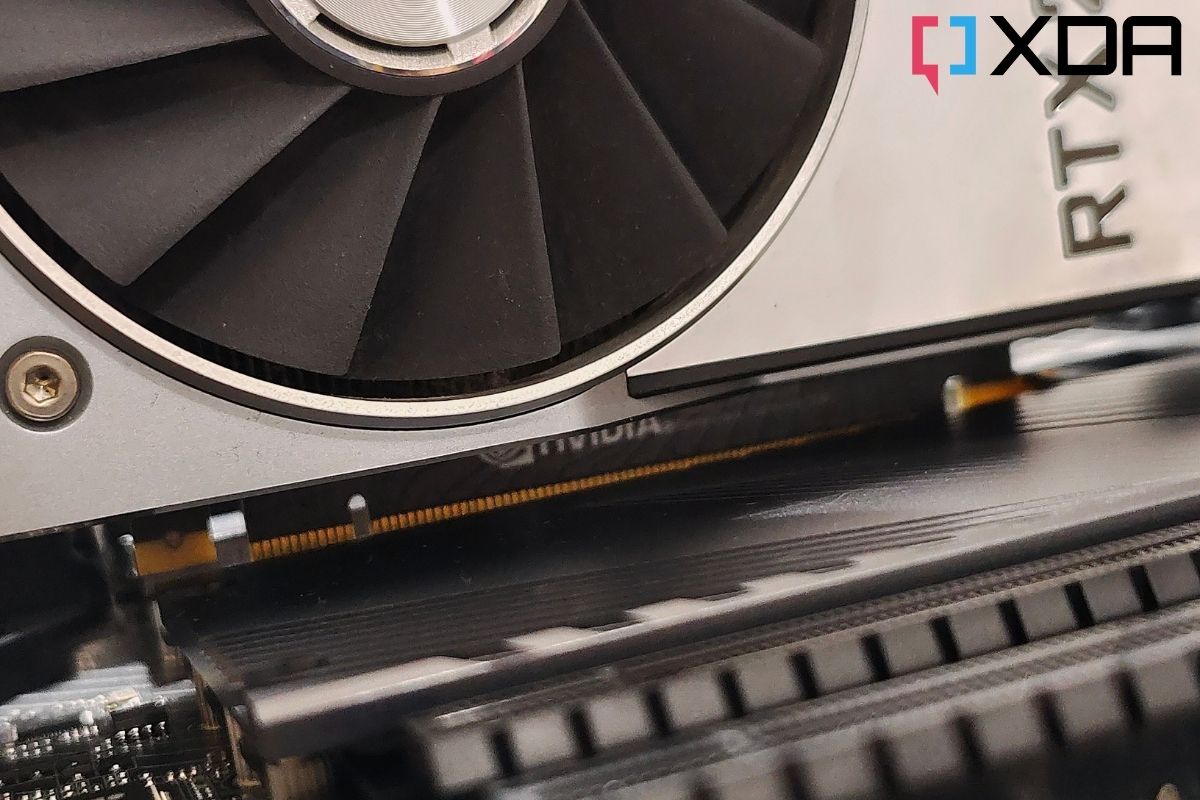 The PCIe 4.0 itself is quite crazy when it comes to data rates, and it translates to some impressive speeds in real-world usage too. The best M.2 NVMe PCIe 4.0 SSDs, for instance, have transfer speeds of up to 7,000MB/s, which is incredible. And to think that PCIe 5.0 will be twice as fast over the same number of lanes is quite amazing, to say the least.

Here’s a quick look at all the generations of PCIe standards that have come out over the years:

So should you really be upgrading to PCIe 5 if you are already on PCIe 4.0? Well, there are many use cases in which the PCIe 5.0 standard may prove to be extremely useful. Even if a particular device doesn’t need any more speed benefits, it can still hugely benefit from having to use fewer lanes, or simply having more bandwidth. This is true for a lot of both consumers as well as professional use cases. That being said, we don’t think the arrival of PCIe 5.0 is going to render your PCIe 4.0 peripherals useless.

We say that because PCIe 3.0 peripherals are still alive and kicking. In fact, we think a lot of the PCIe 3.0 peripherals will be thriving for at least of couple years. So it’s safe to say that there will be no immediate requirement to upgrade to PCIe 5.0 unless you want to experience the best, of course. Even the most powerful graphics card out there, the GeForce RTX 3090, only manages to saturate a PCIe 4 x16 connection. We’ll definitely be seeing some compatible GPUs and blazing fast SSDs but they’ll be available in limited quantities and will also be quite expensive. 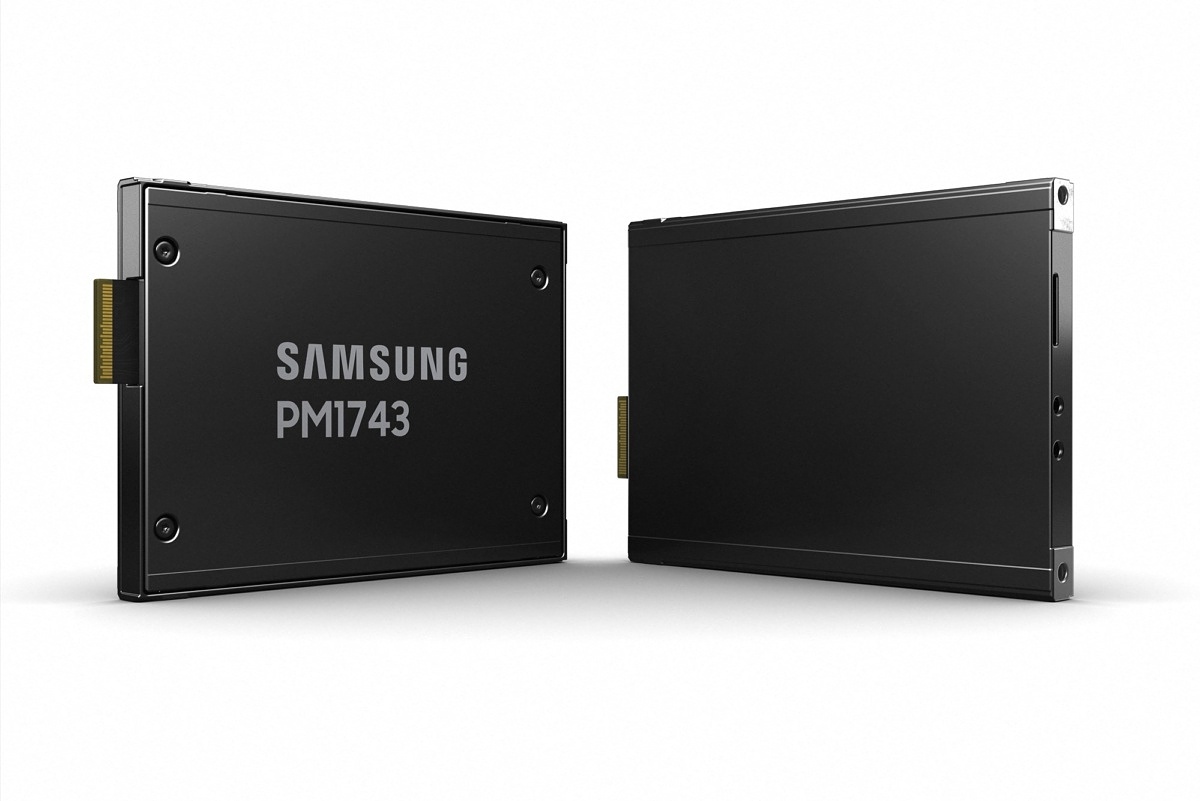 Outside of the consumer space, however, PCIe Gen 5 will have some major advantages. We expect the new standard to be an important part of the data centers. They’ll play a huge role in enabling high-speed networking for communication. PCIe 5 x16 link can easily handle a 400GbE networking connection, which will be a huge transition for many.

PCI Express 5 standard, as we mentioned earlier, has already been released. The specifications for PCIe Gen 5 were officially announced back in 2019. As for the compatible peripherals, they’re expected to hit the shelves later this year. As of now, only Intel’s new Alder Lake CPUs and compatible motherboards have PCIe 5.0 support. AMD’s upcoming 7000 series processors will also bring PCIe 5.0 support later this year and that’s when we expect more consumer-grade PCIe Gen 5 peripherals to hit the market.

PCI-SIG, a general body that defines PCIe standards, expects PCIe 4.0 and PCIe 5.0 standards to co-exist for a couple of years. This is similar to how PCIe 3.0 continues to remain relevant even after the arrival of PCIe 4.0 peripherals on the market.

What is PCI Express?

PCI Express is essentially an interface that connects high-speed components to a computing device. Every motherboard has a couple of PCIe slots that are used to connect PCIe peripherals like GPU, SSD, capture card, etc.

What are the different PCIe slot configurations?

PCIe slots come in different configurations — x1, x4, x8, x16, x32. The number after the “x” tells you how many lanes that PCIe slot has. A PCIe x4 slot, for instance, has 4 lanes and can move data at four bits per cycle.

Can I insert an old PCIe 4.0 compatible peripheral into a Gen 5 slot?

Yes, PCIe 5 slots are backward compatible which means you can insert older generation peripherals into the new slot.

What is the maximum bandwidth of PCIe 5.0?

We’re looking at a maximum bandwidth of 128GB/s with 32 GT/s of gigatransfer speeds.

PCIe 5.0, as you can tell, is still in its infancy. While Intel’s Alder Lake platform supports this new standard and its peripherals, we think there’s still some time before we see the new peripherals on the market. They’re expected to show up just in time for the arrival of AMD’s Ryzen 7000 series chips, although it goes without saying that PCIe 5.0 peripherals will be quit expensive. We think most consumers looking to dish out even a high-end enthusiast PC will be better off sticking to Gen 4 products until the new products hit the mainstream market.

That being said, we’ll continue to update this page with more PCIe Gen 5 information as they become available. We’ll also add some compatible PCIe 5.0 peripherals here, so be sure to keep an eye. In the meantime if you are looking to build a new PC, then be sure to check out our collection of the best CPUs, and best motherboards to keep a track on PCIe 5.0 compatoble processors and motherboards for your new rig.

The post PCI Express 5 (PCIe 5.0): Here’s everything you need to know about the new standard appeared first on xda-developers.