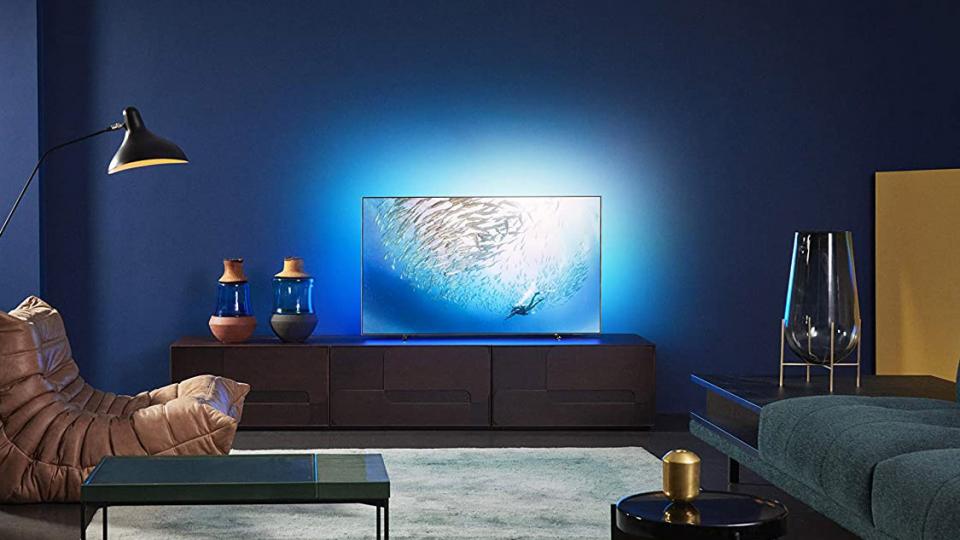 Building on the success of last year’s 804, the 805 OLED is a capable and competitively priced rival to LG and Panasonic’s 2020 OLEDs

This year has seen more than its fair share of fantastic OLED TV releases, so you might be wondering whether the latest Philips OLED can even hope to make an impact. Well, against all expectations, Philips’ affordable 805 might just have made the biggest splash of all.

Predictably, OLED TV technology is becoming more and more refined but recently we’ve also seen it trickling down to smaller screen sizes – and it’s becoming more affordable, too. LG and Sony have both managed to slash their OLED launch prices since 2019 and have even produced OLED TVs in a previously unseen 48in form factor. Philips is sticking firmly to 55in and above for now, but despite this, it has managed to create arguably the best-value OLED of 2020.

Philips 805 review: What you need to know

The 805 is the latest 4K OLED TV from Philips for 2020. First revealed in Amsterdam in January of this year, it’s taken quite a few months to hit the UK market. It comes in one of two sizes, an entry-level 55in (55OLED805) model and the pricier – but still reasonably-priced – 65in (65OLED805) variant on test here. If you shop around, you’ll also come across 55in/65in variants of the Philips OLED855 and OLED865; these are the same TV, using the same panel and packing the same features, but with different stand designs. 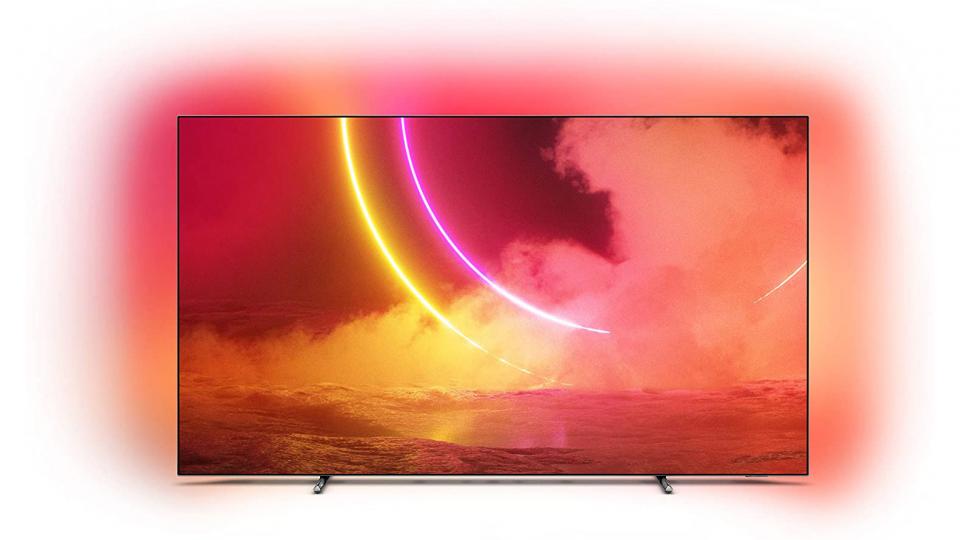 Philips is asking for £2,199 for the 805 65in in the UK, and you can buy it online from Currys PC World and Amazon UK – although it appears to be sold out at the latter. That’s some seriously aggressive pricing, given that the 804 65in from last year launched at £2,599. Essentially, consumers are getting an upgraded model for a £400 reduction.

With the 805, Philips has undercut key rivals such as LG and Sony this year. The LG CX 65in OLED launched at £2,799, as did Sony’s A8 65in OLED, which makes the 805 all the more appealing. The 805 does lack certain high-end features, however, especially when it comes to HDMI 2.1, and as a result, the LG CX makes a better partner for the Xbox Series X or PS5.

Don’t buy the Philips 805 without checking out this deal first! The LG CX 55in model that we reviewed earlier this year has dropped by a stonking £400, bringing it down to just £1,399. That makes it cheaper than the Philips 805 55in and the LG CX 48in, and at this price, it’s clearly the best-value OLED on the market. The 65in and 75in models have had similar discounts. Currys PC World Was £1,799 Now £1,399 Buy Now

It’s even better news for buyers happy to drop down to the Philips 805 55in: it costs just £1,499. That’s the same price as the LG CX 48in model, and absolutely incredible value for an OLED of this calibre. If the 805 55in’s price starts dropping around Black Friday and Christmas, it’s sure to be a best-seller. Keep your eyes peeled for those discounts.

If you’re not convinced you need an OLED, or you’re fearful about screen burn-in, then our top recommendation would have to be Samsung Q95T, Samsung’s best and brightest 4K QLED to date. Originally £2,699, we’ve seen the 65in model on sale for around £2,229. Like the LG CX, the Q95T is also a top pick for gamers.

The 805’s design is extremely similar to last year’s 804, with ultra-slim borders surrounding the panel and a slender chassis that thickens towards the bottom to accommodate the internal components. Supporting the screen are a pair of chrome-finished low profile feet, and Philips also throws in a pair of height adapters so owners can raise the screen and make room for a soundbar in front of the TV.

A soundbar might not be totally necessary, mind you. The sound quality of the TV itself is actually rather good, and certainly better than what we’ve heard from any other entry-level OLED this year. Bass is more than sufficient and there’s impressive clarity too. Of course, for the complete cinematic experience, a soundbar or surround-sound setup is recommended, but it’s not a necessity if you can’t afford to buy both at once. 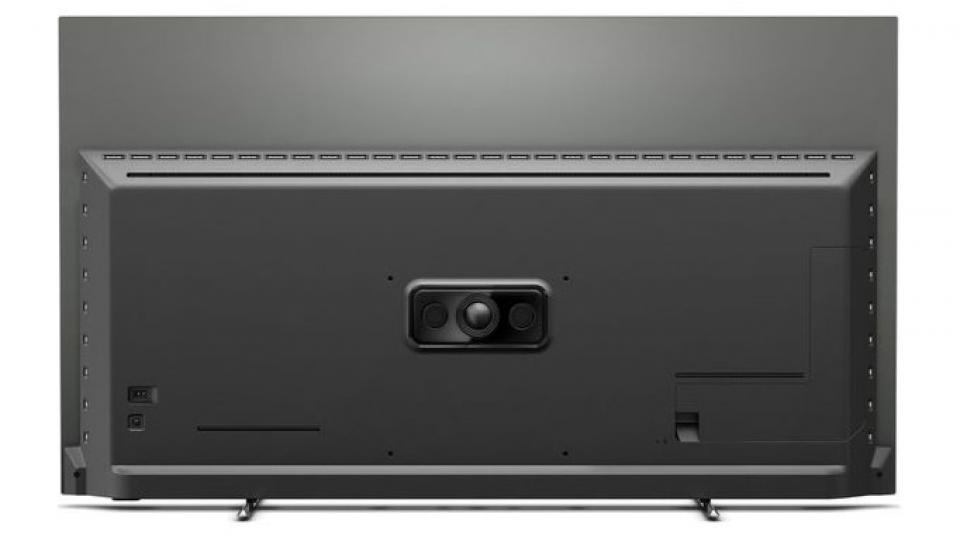 The Philips’ unique selling point in a crowded TV market, however, is Ambilight, and the 805 has a three-sided implementation. Technically speaking, it’s an integrated bias lighting system that, besides adding to the overall immersion, can reduce eye fatigue for long sessions in front of the screen – especially so in darkened rooms.

In layman’s terms, strips of LED lights match the onscreen video and illuminate the wall behind the TV in a kaleidoscope of colour – or not, if you prefer. There’s plenty of customisation on offer, so owners can set the Ambilight to change colours to match the TV’s video or audio output, or just gently light the rear wall with a static warm white. For everyday viewing, the latter is definitely our preference. 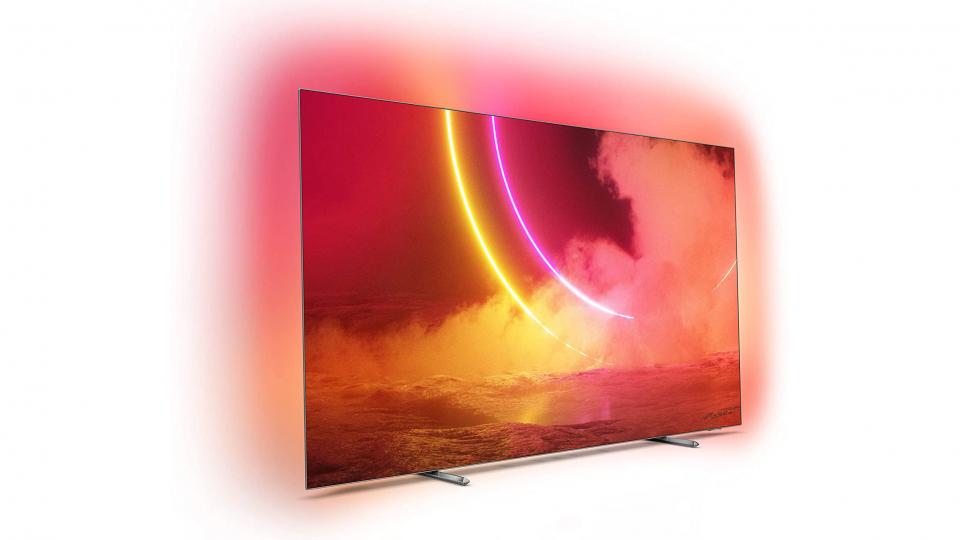 All of the 805’s connections are located at the left rear of the display, including four HDMI 2.0b inputs whose only HDMI 2.1 feature is ALLM (Auto Low-Latency Mode), which switches the TV into a low-latency mode when compatible consoles are in use. For ALLM to work, you first have to turn on ‘Auto Game Mode’ in the user menu.

The supplied remote is Philips’ new-for-2020 premium remote control, with a sleek, elongated design that features angled ends, a leather back and backlit buttons that sit flush to the body. There’s a fairly typical array of buttons, plus shortcuts keys for Netflix and Google Assistant.

With its 2020 LG-manufactured OLED panel, the Philips 805 delivers true blacks, vibrant colours and the wide viewing angles we’ve come to expect from OLED displays. Colour accuracy out of the box is good and exceptional after calibration; we measured an average Delta E of 1.27, and only a couple of colours exceeded the humanly perceptible Delta E 3 error threshold. In practice, this means that colours and skin tones look totally natural and realistic.

Philips TVs are renowned for their effective motion interpolation and this technology has been improved even further for 2020. There are two new ‘Motion Styles’ settings called ‘Pure Cinema’ and ‘Movie’. We prefer ‘Pure Cinema’ because it enables the TV to play 24Hz movies using a 5:5 pulldown in order to present incredibly smooth slow pans that don’t exhibit telecine judder.

Still, some people are more sensitive to the inherent stutter present in 24p movies. For them, the ‘Movie’ setting is better since it applies a small amount of motion interpolation that fixes the judder without incurring an uncanny level of smoothness, often referred to as the Soap Opera Effect. Unlike other 2020 OLEDs we’ve tested from LG and Panasonic, the Philips 805 isn’t capable of 120Hz Black Frame Insertion (BFI), so its motion clarity does lag ever so slightly behind the competition. 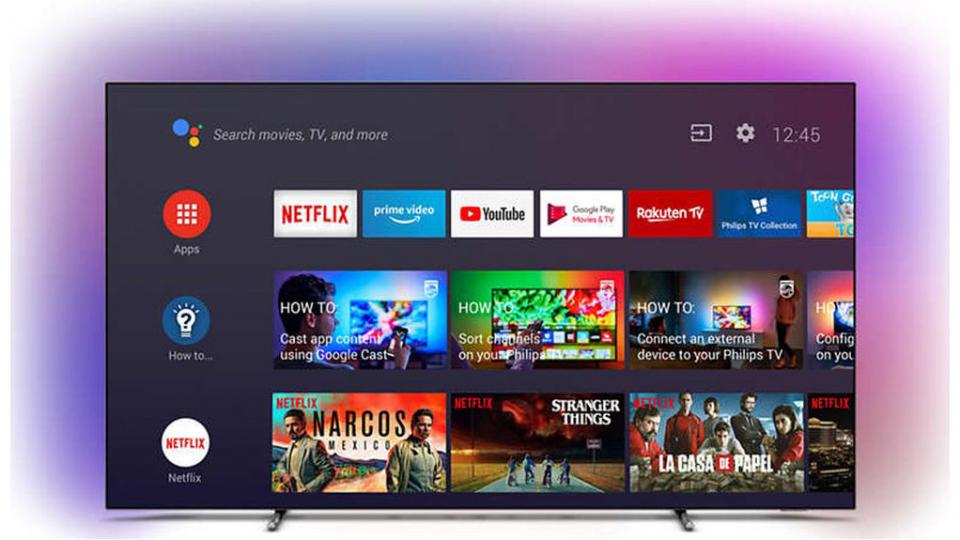 Philips’ video processing tech has also improved and looks cleaner and crisper than on any previous Philips OLED. Upscaling quality for 720p and 1080p content is decent so long as the sharpness controls aren’t dialled up too high – doing so can result in unwanted ringing and visual noise. Note that pixel shifting, an automatic function that reduces the risk of OLED burn-in, still can’t be disabled on the Philips 805. However, the horizontal leeway (the distance that the video frame moves) has been halved so it likely won’t be an issue for most users.

The P5 picture processor does struggle a little bit when playing darker scenes within heavily compressed content, resulting in some flickering and macroblocking artefacts here and there. Panasonic and LG OLEDs do a better job here and manage to keep these occurrences of near-black luminance overshoot better suppressed.

Screen uniformity is top-notch, however, with no visible dirty screen effect (DSE), banding or colour tinting on full-frame greyscale slides. In low-light scenes, you may occasionally notice thin vertical streaks on the panel if watching in a pitch-black room, though this is typical of any consumer OLED TV.

In the 805, Philips offers the complete High Dynamic Range experience with multi-format support for HDR10, Hybrid-Log Gamma, HDR10+ and Dolby Vision. No matter where you get your HDR content, whether it be from streaming services, Blu-ray discs or video games, the 805 has you covered.

Colour gamut reproduction is comprehensive, with a 98% DCI-P3 coverage and 75% Rec-2020 coverage. And with the second-highest brightness of any 2020 OLED, the HDR experience is as impactful as it gets. We measured a peak luminance of 700nits on a 10% window after calibration, and 125nits full-screen, putting the 805 just below the £4,000 Panasonic HZ2000 with its 135nits. As on the HZ2000, bright specular highlights really shine on the Philips 805.

The 805 makes the most of the TV-led implementation of Dolby Vision, optimising colour mapping and tone mapping on a scene-by-scene or frame-by-frame basis without any signs of the black crush that affected previous Philips OLEDs. Philips has also made efforts to improve the static metadata tone-mapping on the 805 so it adapts HDR10 more appropriately, better preserving highlight details in 4000-nit HDR10 content compared to older Philips TVs.

From a gaming perspective, the Philips 805 is less impressive. Without HDMI 2.1, it doesn’t support Variable Refresh Rate (VRR) or 4K 120Hz playback, two of the key next-gen gaming features that potential PS5 and Xbox Series X owners will be looking for in a new TV. It does have ALLM for automatically enabling the low-latency Game Mode, but even then the response times left us wanting: we measured an input lag of 33ms, which is nowhere near the speeds achieved by the LG CX or Samsung Q95T.

Make no bones about it: OLEDs like the LG CX have the 805 beaten on the gaming front. The lack of VRR and 4K 120Hz capabilities is disappointing and, were they supported, the 805 would probably be the most complete OLED you could buy. As it stands, the Philips 805 is best-suited to home cinema enthusiasts who are seeking a high-quality OLED at a reasonable price.

Despite those quibbles, the Philips 805 OLED is a worthy successor to last year’s 804. The 24p film motion handling and HDR10 tone-mapping are a big boost, and its video processing has also undergone some positive tweaks. Crucially, overall HDR performance is exceptional, and Dolby Vision content really shines. With superb performance at a supremely competitive price, this is the OLED TV bargain of the year.