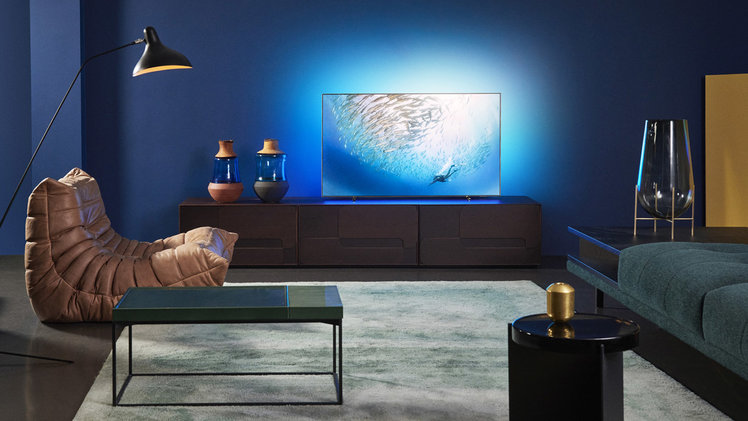 Boasting a next-generation P5 image processor with AI enhancement, changes to Ambilight – the LED lights on the back of the TV which help expand the image beyond the frame – and the adoption of DTS Play-Fi multiroom audio, there’s more to Philips 805 OLED TV than a mere numerical increment over its predecessor.

We hauled the 55-inch version on the test bench to take a closer look. For those hankering for a few more inches, there’s also a 65-inch model available – and whichever of the two sizes you choose, both make everything look good, but there is a catch…

Philips has really got its design game on point. A minimalist frame and dark chrome feet make the 805 a designer statement. 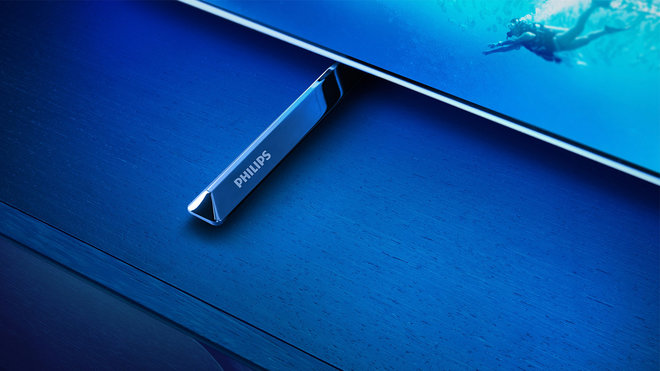 It’s beautifully finished, with a gun metal grey bezel and a pair of matching edge-placed feet. The screen sits virtually flush with these boots, but you can use a riser if you want to park a soundbar beneath.

Around the back you’ll find four HDMI sockets, all of which support 4K up to 60fps, as well as two USB ports, an AV minijack for legacy hardware, digital optical audio output, and Ethernet.

It’s worth noting that none of the HDMI ports here support 4K120p, which will be one of the output options on the PlayStation 5 and XBox Series X games consoles – although it’s not clear yet just how significant this shortfall will be. This is that ‘catch’ we alluded to up top, if it affects you. 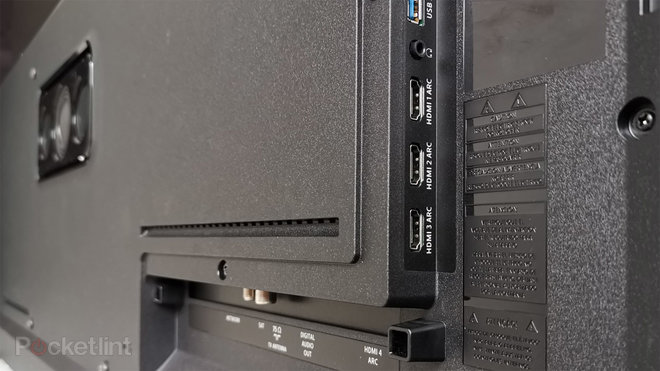 For that high-end finishing touch, the 805 ships with a new backlit remote control, wrapped in muirhead leather. 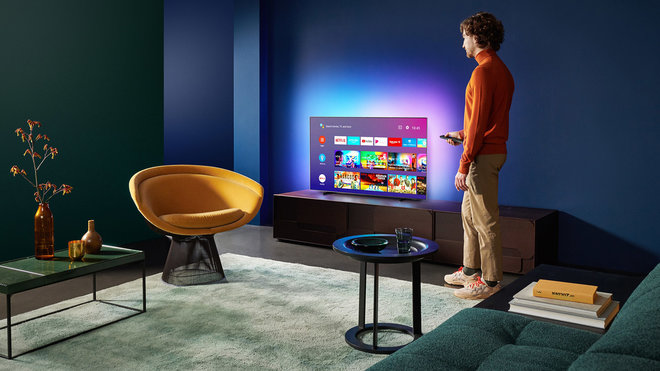 Philips’ smart portal of choice, for its higher-end OLED sets at least, remains Android (here at version 9.0), with tuner support from Freeview Play.

It’s a strong combo – and far better than earlier versions of Android. The latest iteration for Freeview ensures all the main catch-up TV services – namely BBC iPlayer, ITV Hub, My5, All 4 – are on hand, while the Android OS offers a plethora of streaming apps, including Netflix, Prime Video, Disney+ and YouTube.

As you’d expect from Philips, the 805 features a three-sided implementation of the Ambilight mood lighting system – but there are some changes in its implementation. An Ambisleep mode, designed to send you off with a warm glow, has joined the options, while the Ambilight Follow Colour mode, which throws a solid hue up against any surrounding wall, has been renamed the rather more evocative Lounge Light. 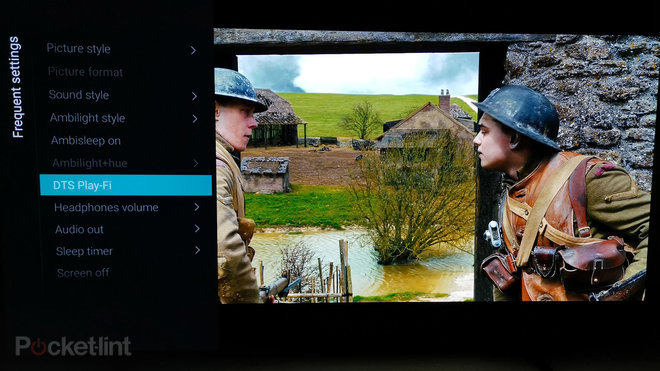 The 805 is also compatible with DTS Play-Fi, a high-res streaming alternative to Denon Heos, Sonos and similar. This means the 805 can work with other Play-Fi components in a multi-room ecosystem. DTS Play-Fi is slowly being adopted by a variety of Hi-Fi and AV brands, including Arcam, Acer, Klipsch, Pioneer and Onkyo. 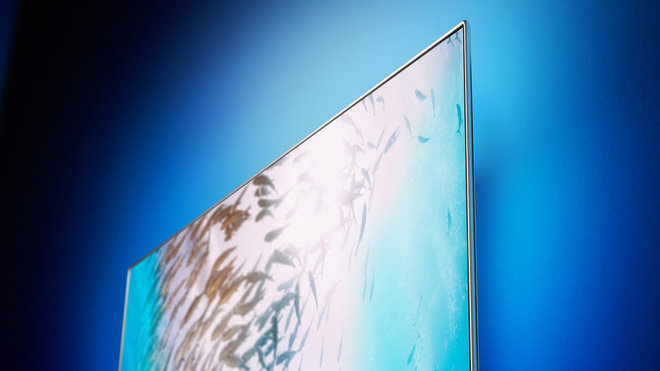 Cards on the table: we’re fans of Philips’ approach to image processing. It’s never been afraid to push panel technology, celebrating colour and contrast in ways few brands can pull off.

And its predilection for crowd-pleasing vibrancy gets a boost here, in the shape of a fourth-generation P5 picture engine – which now employs AI processing. Artificial intelligence adds extra edge to HD standard dynaming range upscaling, and manages to extract even more detail from native 4K content.

AI is managed in the Picture Styles menu, adjustable from within the set’s Advanced AI settings. For best results, we preferred Colour and Sharpness set to Medium. Ingeniously, you can see the set’s AI image processor working in real time, courtesy of an onscreen demo screen. 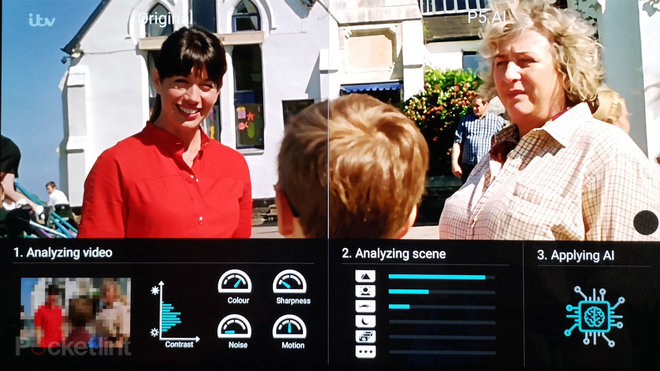 Peak brightness was measured at 900 nits when using the Vivid preset. Measured in Standard mode, HDR peaks drop to a still impressive 850 nits – which is decent for an OLED panel. In addition to bright specular highlights, near black detail is outstanding too. It’s like 3D without the specs.

The all-new Filmmaker Mode standard, from the UHD Alliance, is also included… after a fashion. There’s no dedicated FMM button on the remote control – instead, it can be triggered by an FMM metadata flag in content. That’s not actually been implemented as yet, so Philips points users to the Movie mode instead.

Animation, blockbusters and TV studio fare all look superb. The slightly over-wrought colour spotted on the earlier 804 has been reined in. But there’s no shortage of colour pop. 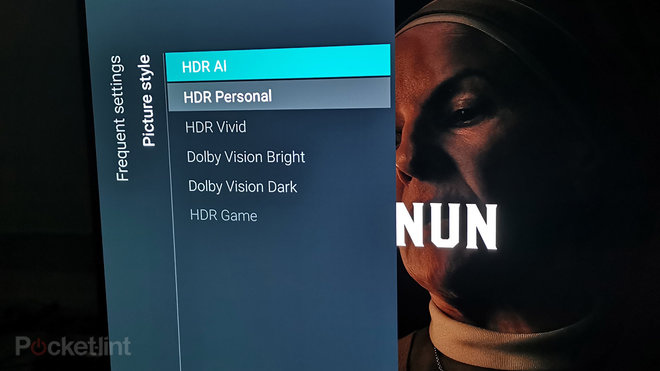 In addition to AI image handling, Philips has made some welcome tweaks to its motion processing. There’s a great new Pure Cinema mode, while Sport has been absorbed within a reworked Movie setting.

Where the OLED805 stumbles is gaming performance. We measured input lag at 33.2ms (1080/60p) using the dedicated Game mode, which puts it near the back of the OLED pack when it comes to fragging.

When it comes to sonic performance, the 805 offers a modest step up from last year’s 804, courtesy of a revamped speaker design to take better advantage of its 50W power plant.

Both the mid-range woofers and tweeters have been enlarged, and there’s some additional passive radiators, resulting in greater clarity and more pronounced bass. These modified speakers deliver plenty of welly.

While Dolby Atmos support is supported, you’ll want to bitstream it out over HDMI ARC to a compatible soundbar or home cinema system to make the most of the immersive sound format.