These days, Oculus Quest 2 owners who want to play PC VR games on their headsets have many options. Oculus Air Link is built into the headset and supports 120Hz refresh rates, while Virtual Desktop also lets you play PC VR games on Quest. But if you don’t have a fast Wi-Fi network or a PC that can’t keep up with the network speed needed for wireless PC VR, an Oculus Link Cable is the next best thing. You can’t just hook any cable up, though. You need one that’s both long enough to allow you to move freely and one that’s fast enough to handle all the streaming data that PC VR requires. Here are our personal favorites, the Oculus community’s top picks, and Oculus’s official Link alternatives. 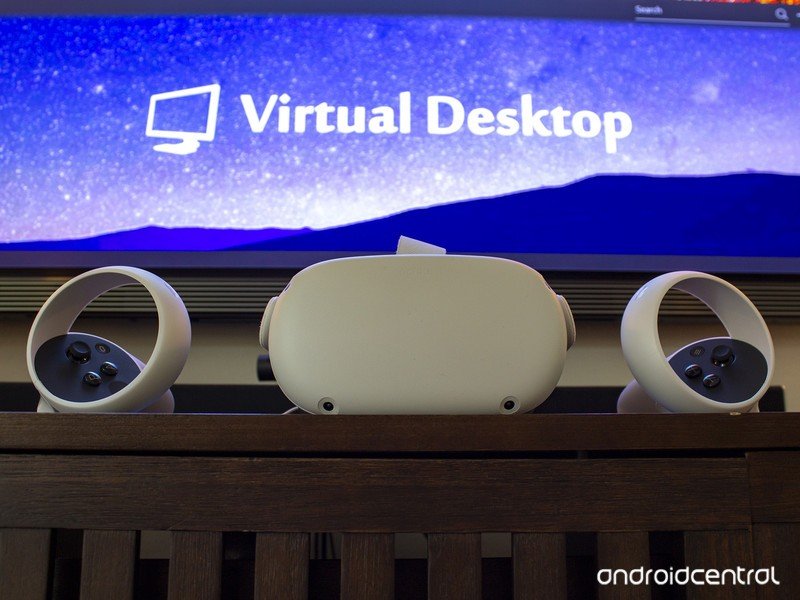 Before Air Link, Virtual Desktop gave Oculus Quest superusers a way to sideload PC VR games without any cable. Now, Oculus offers wireless streaming for free with similar performance levels, making the paid Virtual Desktop less unique. But it’s still one of the best Quest 2 Link Cable alternatives to have in our opinion. It not only lets you play games, but also watch movies or use your PC in-headset while surrounded by cool virtual environments. It gives you much more customizable control over PC settings than Air Link. And some users claim VD still runs PC VR games better than Air Link in some areas, such as latency. If Air Link gives you trouble, it’s a nice backup to have in your pocket, but you still want to stay wireless. 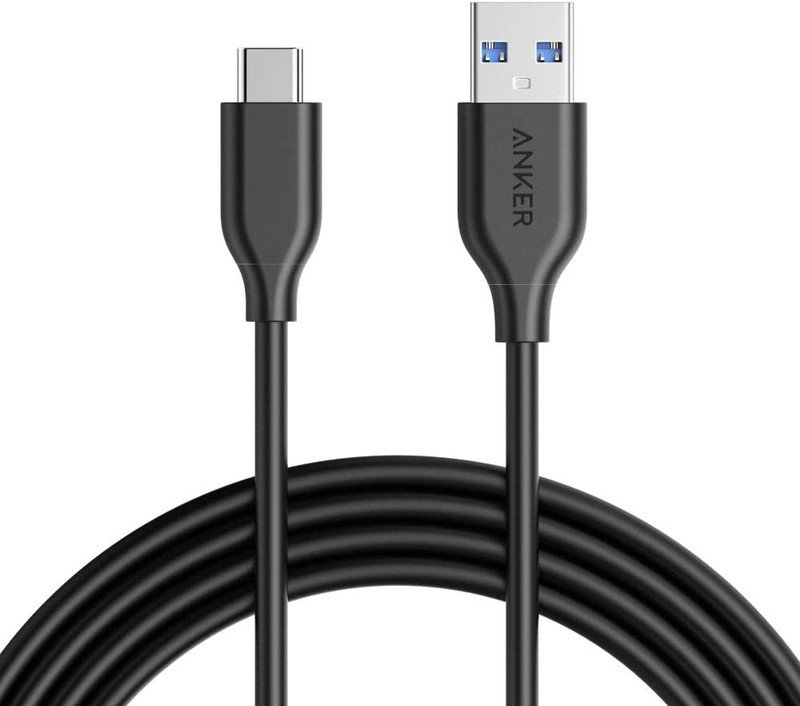 On the official Oculus Link support page, the company states it tested this USB-C to USB-A Anker cable “internally with good results.” It hits the USB 3.0 5Gbps standard for fast data transfer and supports 15W fast charging, so your Quest 2 remains fully powered under the heavy workload. It’s reliable and popular with Quest 2 users, but you may want a longer cable with a 90-degree USB-C cable head if you plan on playing more motion-heavy PC VR games. 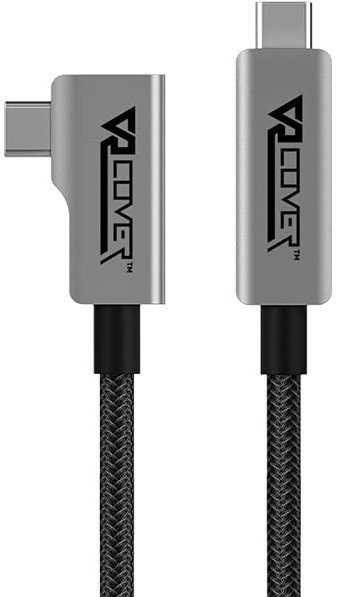 The official Oculus Link Cable is a 16-foot, USB 3.2 Gen 1 Type-C cable rated to transfer 10Gbps, with great specs that justify its high price. But VR Cover, a hugely popular Oculus accessory-maker known for its Quest 2 face covers and hand straps, has released a nylon-braided cable with the exact same specs while costing significantly less. It has the 90-degree USB-C head that’s perfect for Oculus Link and the length necessary to step far away from your PC while playing. Other Link Cable alternatives are cheaper, but this may be the best non-Oculus option. 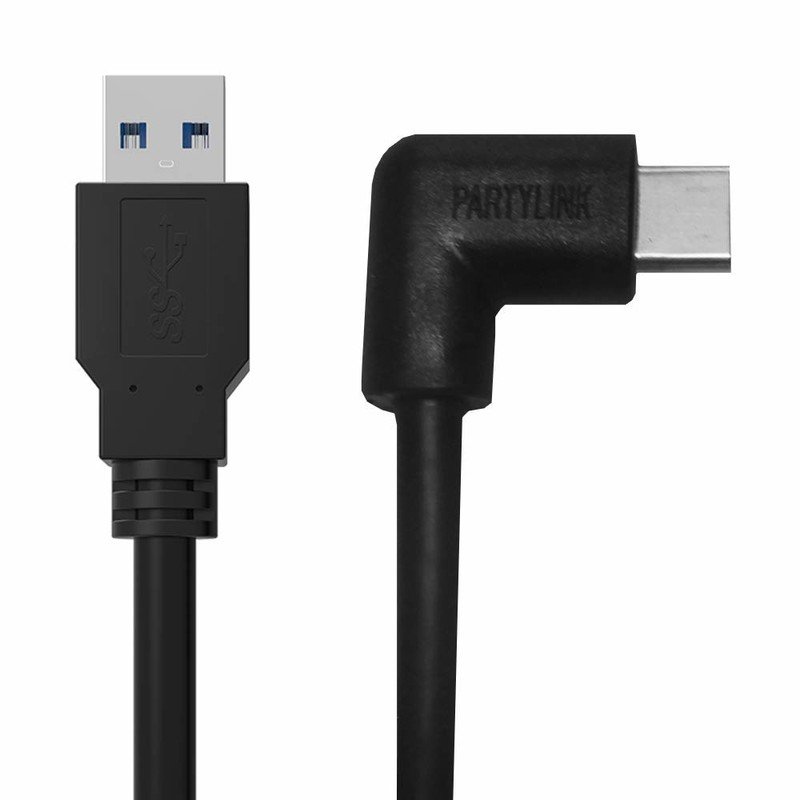 This PartyLink Cable is probably the longest you’ll find that actually hits the required data threshold for Oculus Link without an extension cable. The manufacturer claims it can hit 1,500 Mbps and suggests connecting it directly to the motherboard for the best results. One of Android Central’s Quest 2 owners regularly uses it for Oculus Link and has had no issues with performance. However, keep in mind that this cable can’t charge as fast as the regular Link Cable, so you’ll run out of battery after an all-day VR session. 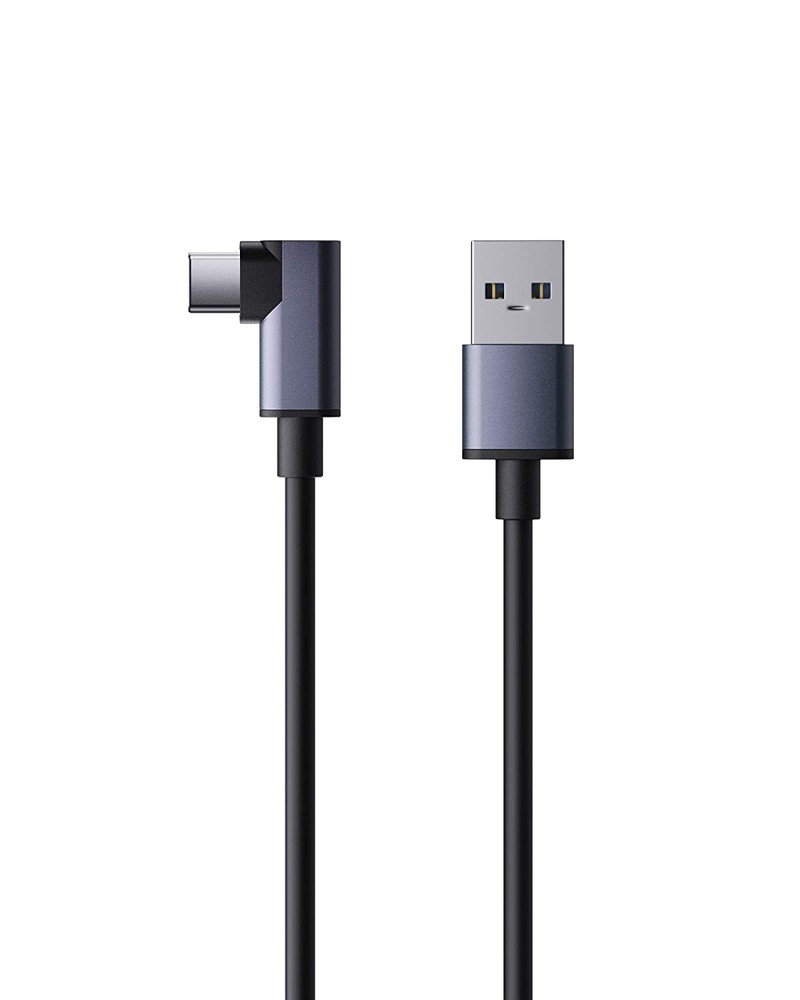 Another 16-foot cable, the Amavasion, also has a 5Gbps maximum and a limited charging capacity to extend play sessions but not keep it running indefinitely. Compared to the PartyLink Cable, this is rated USB 3.2, but doesn’t take full advantage of the higher standard and costs more. That being said, it’s also a thinner cable that may feel lighter dragging behind you during your VR adventures. 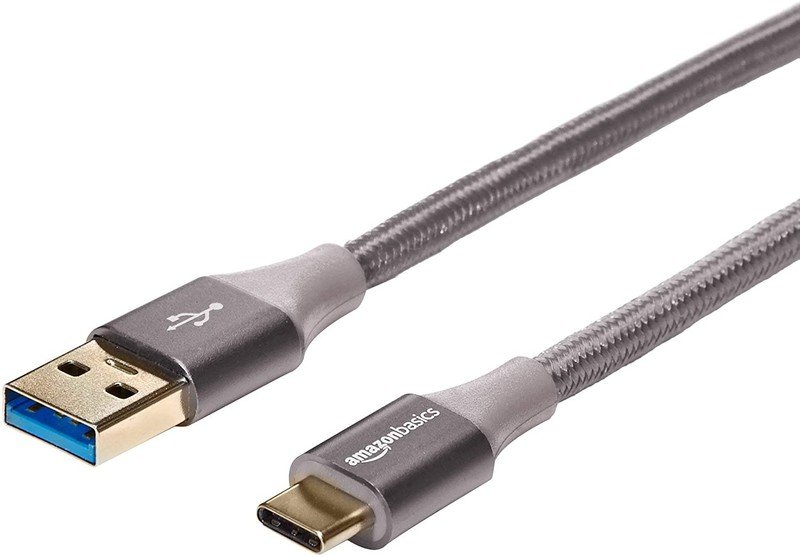 Oculus’s official Oculus Link backup, the 10-foot Anker cable, sometimes goes out of stock, and this cable is the closest alternative in price, features, and quality that you can rely on. It supports 5 Gbps data transfer and 5V charging. Made of double braided nylon, it should be durable when jerked around and even comes in four colors for a little extra personality.

Add 16 feet to any Link Cable 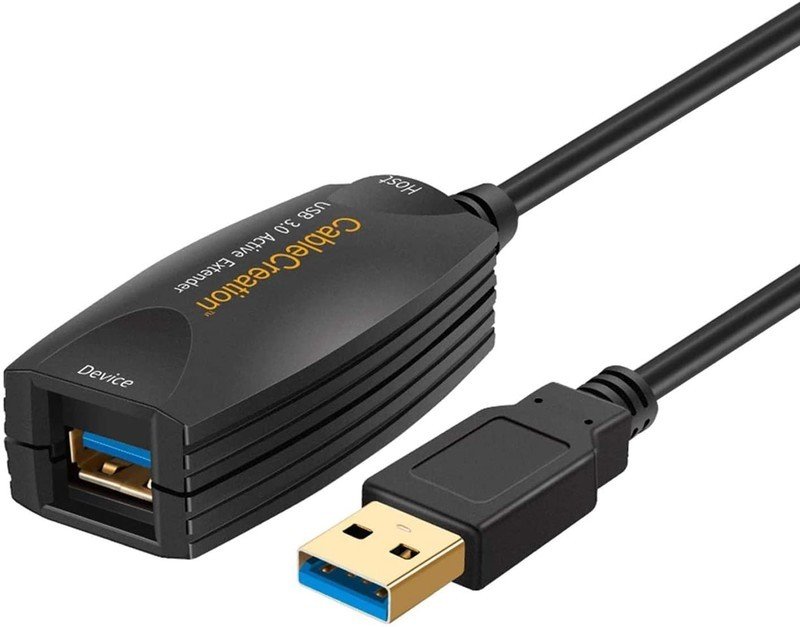 USB 3.0 cables are typically maxed out at 3 meters (or around 9 feet) to preserve their fast speeds, but this won’t be enough for games where you want to stand up and move far away from your PC. This 16-foot extender will preserve the power transfer and 5Gbps data speeds. Of course, you’ll need to buy one of the USB 3.0 to USB-C cables (such as Anker’s or Amazon’s) in addition to this, but that plus the CableCreation extender will cost less and stretch 10 feet longer than the official cable. 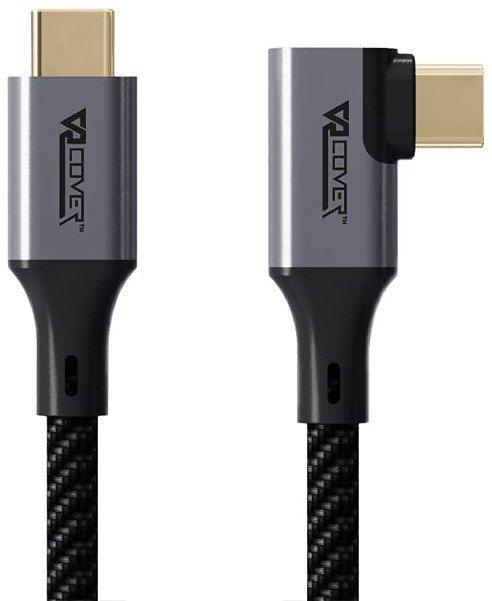 Like the 5m version, this VR Cover cable is USB-C to USB-C with a 90-degree head for the headset; it’s only capable of 5Gbps, but this should be plenty for Oculus Link. It’s incredibly affordable, too. What’s the problem? It’s also incredibly short at just 6 feet. This cable is specifically designed for playing a seated VR experience directly next to your PC, where you won’t do much movement except maybe turning your head. If you’re fine foregoing roomscale VR or exercise games, this is a great, cheap alternative. 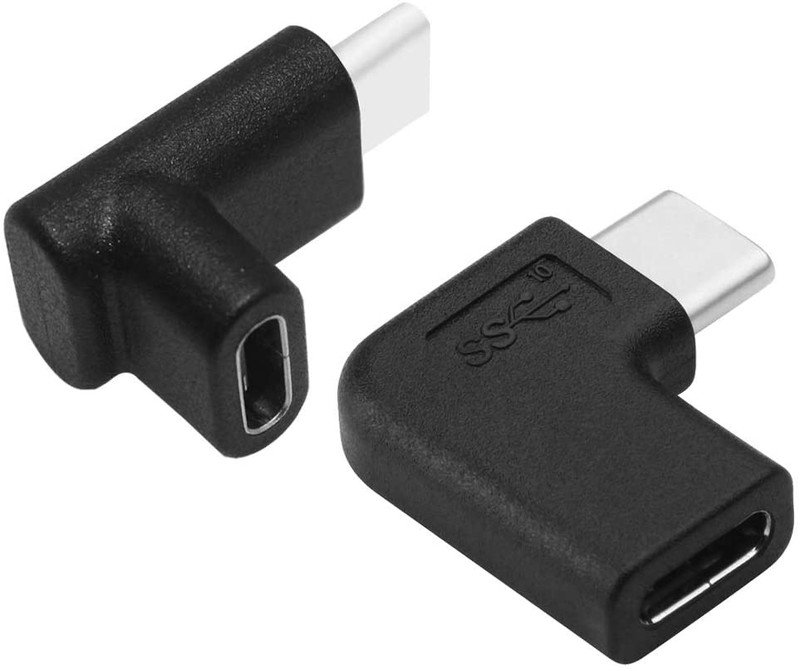 Some of the best USB-C cables have straight heads that aren’t made for a headset jerking around left and right. With an adapter attached, your Link Cable will sit perpendicular to the headset, which should make it less likely to get bent when you move around. These tiny adapters are USB 3.1-compatible with transfer speeds up to 10Gbps, so they will have no trouble passing through your data and power.

What specs do you need in an Oculus Link Cable?

Finding the best Oculus Link Cable alternatives wasn’t easy because there is an uncomfortable number of imitation cables that range from defective to actually dangerous for your Oculus Quest 2. We’ve read horror stories about USB-C heads snapping off inside the Quest 2 port, rendering it unable to charge. More commonly and less drastically, you’ll find cables that work for a couple of weeks before they wear down and can no longer properly connect your headset to your PC.

That’s why we tried to consider the best options for those who can’t afford the official Oculus Link Cable. But if you want to look for your own alternatives, or see if the USB-C cable you own now could work, here’s what you need to know:

What is the best Oculus Link Cable length? 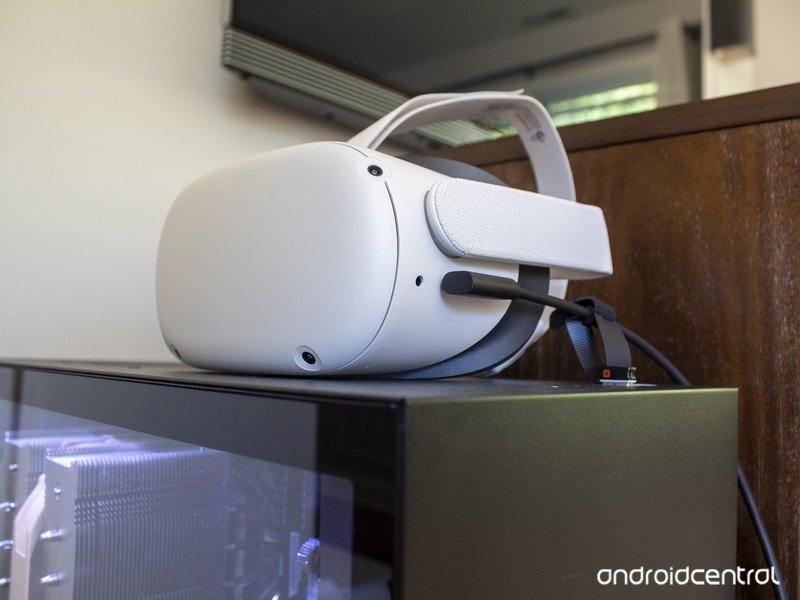 Oculus’s official cable is 16 feet, or 5 meters, which should give you plenty of leeway for physically moving around a room. Keep in mind, though, that the reason Oculus’s cable is so expensive is partly that it manages to maintain a fast data transfer speed across 5 meters as a USB-C to USB-C cable when most USB 3.0 cables are maxed out at 10 feet. As a result, standalone cables longer than that may not satisfactorily transfer data from a powerful PC without some data loss.

This is why we included extension cables on our list, although you might not want to build a massively long Oculus Link combo cable even if the data transfer works perfectly. The longer your cable, the more it will extend across a room and dip downwards in the middle. This will create a tripping hazard for both you and anyone else who lives with you. When that happens, either you’d better hope the cable comes out of one of the ports, or either your head or the PC is getting yanked downwards. That’s also why you should always velcro strap the cable to the head strap, as it’ll help save your USB port from disaster.

Decide whether you plan on doing room-scale VR or not. If not, you may be able to make do with a 10-foot cable like the Anker Powerline Cable (or even the 6-foot VR Cover cable). Otherwise, you can try your luck with a 16-foot cable like the PartyLink Cable or pair a short cable with the CableCreation Active USB 3.0 Extension Cable for a particularly long contraption. VR Cover’s 16-foot USB-C cable is likely your best bet, but it’ll still cost too much for some buyers.

How to use your Oculus Link Cable

We hope that our Oculus Link Cable alternatives will live up to your needs, but be sure to test the cable as soon as it arrives, so you can return it if the cable (or your PC graphics card) turns out not to live up to the task. Here’s what you need to do to use Oculus Link on the Oculus Quest 2.

You should now be able to use Oculus Link. If you were unable to connect or your PC games struggled with performance issues, you may have a problem with your cable or PC.

If you’re suffering from random disconnections, make sure you select Deny when the Allow access to data pop-up appears after connecting the cable. Selecting Allow will cause connection inconsistencies. If you’re having other issues, our Oculus Link Cable troubleshooting guide can help you out.

Oculus Link Cables, official or unofficial, give you the best, most consistent visual performance. But even if ditching a physical cable causes a slight dip in visual quality, it’s so much less restrictive. You don’t need to worry about yanking a cable and damaging something; that’s why people prefer the Quest 2 so much over the Rift S! And you can use Air Link for free indefinitely, so maybe give it a test run before paying for a cable.

Air Link lets you wirelessly stream your PC games to your Oculus Quest 2 by way of your home’s Wi-Fi network. It arrived in the April v28 Quest update, and was later upgraded in v29 to support a silky-smooth 120Hz refresh rate.

Setting up Oculus Air Link is a simple process, thankfully. But for your games to perform well, you’ll need the right hardware for the job. Specifically, you’ll need a PC with graphical chops to handle hardcore PC VR games. If you’re having trouble in that area, feel free to check out our list of the best-prebuilt PCs for Oculus Link, which will tell you what kind of specs you may need and how much it’ll cost.

Also, keep in mind that wired internet is generally more consistent because it connects directly to your router. To go the wireless route, you’ll need a router that lives up to the task. The best best Wi-Fi 6 routers should deliver the performance you need, though they can be a bit expensive for someone trying to save money.

With the right computer and a fast router, you’ll be prepared to play Quest 2 games wirelessly. You can do so through Air Link for free, or you can try out the Virtual Desktop app to get the full PC-in-VR experience! Either way, these tools will make your Quest 2 truly wireless again, even when playing demanding VR games like Half-Life: Alyx.