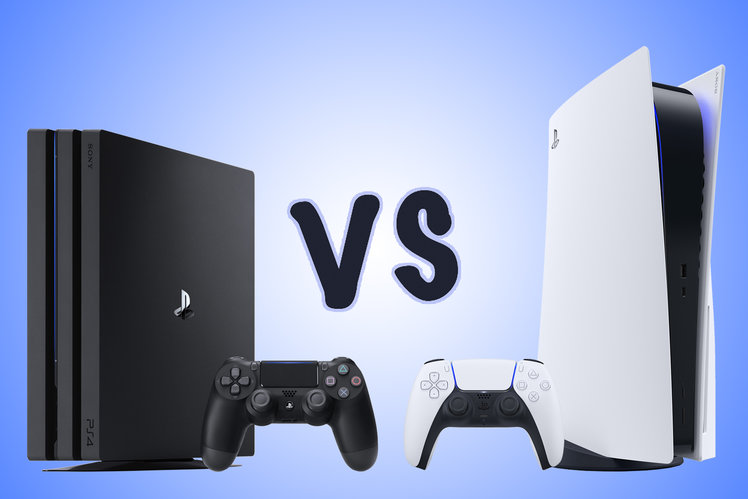 In a matter of days, the next-generaton of gaming will kick off and the PlayStation 5 will be available in both standard and Digital Editions. And, from our review testing, it’s a true beast of a machine.

But is that enough right to get you to cough up a fair penny right now to upgrade from a PS4 or PS4 Pro, or should you wait?

And, if you are only just considering a PlayStation for the first time, which will be best suited to your needs and budget?

We hope to help answer those questions right here.

Both the PS4 and PS4 Pro have a similar design aesthtic – like a console-flavoured sandwich. The Pro is fatter, but they each sit in a similar footprint in your AV cabinet.

The PlayStation 5 on-the-other-hand is mammoth – considerably taller and heavier than either PS4. It also looks different, with white elements and a form factor that looks far better standing on its end than laid flat. It has fateplates either side and will be tricky to cram into an average TV cabinet or stand.

But its size isn’t just for aesthetic reasons. The faceplates hide and enormous fan and vacuumable dust ports. More powerful processing usually comes at the cost of cooling, so the PS5 is designed that way to keep it as cool as possible. Certainly, in our review process, it runs silently.

Not so our PS4 Pro. That sounds like a helicopter taking off these days, it runs so hot. The PS4 is known for its fan noise too.

Naturally, the PS5 represents a next-generational leap in tech, so the processing unit and GPU are singinifactly more advanced that the ones used in the PS4 models.

All three consoles – base PS4, PS4 Pro and PS5 – use custom AMD CPUs, but the processing potential greatly improves as you move up the family.

Both the PS4 and PS4 Pro sport the same octa-core x86-64 AMD “Jaguar” chipset, while the PlayStation 5 adopts a much more recently crafted processor modelled on AMD’s octa-core Zen 2 design. It runs at 3.5GHz per core for starters, which makes it a heck of a lot faster than the current gen alternative.

As for graphics, this is even more diverse. While all feature Radeon chips, the standard PS4’s GPU is capable of 1.84 TFLOPS, the PS4 Pro 4.20 TFLOPS. In comparison, the PS5 has 10.3 TFLOPS of power (running across 36 compute units) available for developers to make the most of.

Basically, this means the PS4 maxes at a 1080p resolution, the Pro at 4K (mostly checkerboard rather than native) and is most comfortable at 30fps. The PlayStation 5 on the other hand is capable of full 4K 60fps gaming, even 120fps, games permitting. There is also potential for 8K resolutions somewhere down the line but it could be years not months before we see anything of the sort.

It also has the ability for games to use ray tracing visual technology, which makes for much more accurate lighting effects. The PS4 models are not compatible with that relatively new tech.

RAM will also make a difference in terms of speed and number of processes each console can handle at once.

The PS4 and Pro models each include 8GB of DDR5 RAM, while the PS5 ups the ante to 16GB of GDDR6.

Storage too will make a considerable difference, considering its use in the PS5.

The base model of the PS4 incorporates 500GB of HDD storage, while an enhanced version ups that to 1TB, much like the one found inside the PS4 Pro. And, although the PlayStation 5 will come with slightly less storage capacity than the Pro, at 825GB (667GB available to the user), it uses solid state drive (SSD) technology instead. This has considerably faster read and write times, making games load in just a few seconds, both when you start them up and during play.

All of the PlayStation consoles can be upgraded through USB with an external hard drive to greatly increase capacity, although native PS5 games will not run from an external drive – only PS4 titles through back compatibility.

You can upgrade the hard drives in both PS4 and PS4 Pro right now, while you’ll have to wait until Sony activated the SSD expansion slot in the PS5 to accept third-party cards.

After years of DualShock controllers, with the PS4’s DualShock 4 being the current iteration, PlayStation has developed a new controller for the PS5.

The DualSense looks slightly different, more like an Xbox controller, but also has haptic technology on board that replaces the age-old rumble packs. There are also adapative triggers.

You can read more about the new PS5 controller here: PS5 DualSense controller: Key features, details and all you need to know.

One of the best surprises we got in recent times is that PlayStation 5 is backward compatible with the vast majority of PS4 games. That means you can take your back catalogue with you when you upgrade. Some even run with greater/more stable frame rates and resolution.

Also, some games, such as Cyberpunk 2077, enable free upgrades whereby, if you purchase the PS4 version first, you’ll be able to get the PS5 version at no extra cost after you upgrade.

One accessory that we are thrilled to see return is the Media Remote. The dedicated remote control for PS5 will help navigate through streaming services and Blu-ray playback.

Strangely, Sony decided against releasing an official one for PS4, even though it proved popular on the PlayStation 3 before.

Although Sony was bullish about only including a Blu-ray deck on the PS4 and PS4 Pro, even though the latter is capable of 4K HDR video playback, it has decided to add a full 4K Ultra HD Blu-ray player to the PlayStation 5. Better late than never.

Naturally, the PS5 Digital Edition won’t have a drive at all.

All of the consoles have or will have access to numerous video and music streaming services, with the Pro and PS5 capable of 4K HDR. The standard PS4 has HDR capabilties, but is locked to 1080p.

That might prove a bit spicy for your budget. If so, the PS4 Pro currently costs around £410 (although we expect that to drop quite soon), while a 500GB standard PS4 will set you back from around £280 to £300.

There is clear that the PS5 makes for a big shift in gaming graphics and potential but it is worth considering that, traditionally, the first wave of next-generation games have always been available on the previous generation too. And, with such incredible machines already available (just look at The Last of Us Part 2 running on a PS4 or PS4 Pro) you might not feel the itch to upgrade just yet.

Still, the PS5 is a proper powerhouse of a machine that is truly futureproof, so there is every chance your bank manager is already sweating.