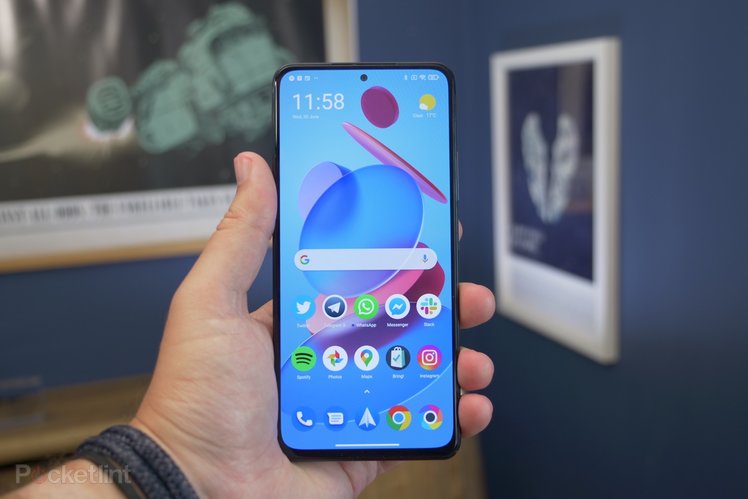 Over the past few years, as the smartphone market has become more saturated, it’s not been that often a device comes along and blows you away with what it offers. Or at least, one you pick up and think: “I can’t believe this costs so little”.

One such device, however, is the Poco F3. In many ways it’s similar to the Redmi Note 10 Pro – another phone which impressed us with its astonishing value for money – which is no real surprise, as both Redmi and Poco are Xiaomi off-shoots.

Is the Poco F3 the best value for money smartphone you’ll find in 2021?

There’s something about the Poco F3 design that’s really appealing. And at first it was a little hard to understand why. Looking at it, there’s nothing truly special on first impressions. It’s very much your standard modern phone design made with a plastic frame sandwiched between glass layers on the front and back.

The camera housing is quite attractive, with Poco gracefully avoiding falling into the trap of just slapping a boring rectangle on the back and lobbing some cameras into it. It’s more purposeful than that, with the subtle, thin ring outlining the main camera.

What we found great about this phone, however, is the shape. The combination of having that expansive screen on the front and the gentle curves on the back means that when it comes to communicating and replying to messages it’s super practical and comfortable to use in two hands.

The completely flat screen means little chance of misfiring on the installed keyboard, while the device’s relative thinness means you don’t feel like you’re holding a brick. Similarly, that flat screen means there’s rarely any instance of accidental touches. 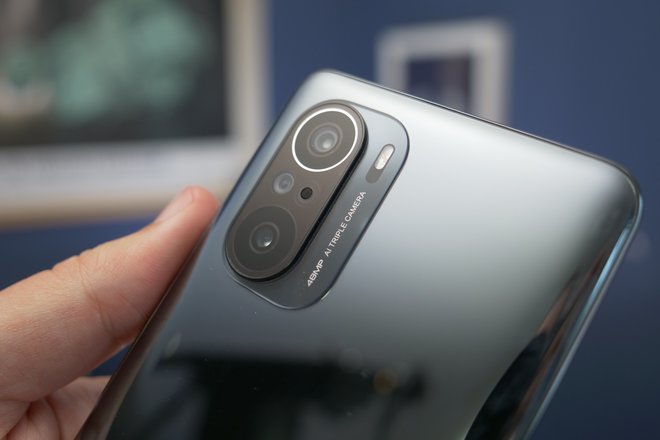 Now, obviously, there’s no denying that this is quite a large phone in terms of width and height, but it’s less than 8mm thick and that definitely helps it avoid being of gaming phone proportions. Compared to, say, the first generation OnePlus Nord, the Poco feels noticeably slimmer in the hand.

That screen takes up nearly all of the space on the front, but there’s just enough space carved out on the side for placing the two buttons on the right. The power button also features the fingerprint sensor, which in a button as slim as this would have seemed impossible just a couple of years ago, but it’s surprisingly practical, reacting fast and responsively.

You’d assume that having a physical fingerprint sensor means the device has an LCD display – but it’s not. Poco has put a large 6.67-inch OLED panel into this phone, which is genuinely great. 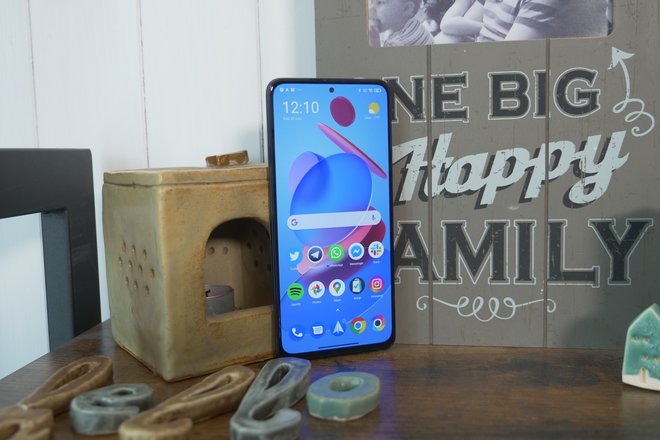 With its Full HD+ resolution it doesn’t quite reach that pin-sharp look of QuadHD panels, but it’s got a lot going for it still. It combines an impressive 1300 nit peak brightness with 120Hz refresh rate maximum and HDR10 support for high dynamic range support. And it shows.

While the default setting is really quite vivid, with blue tones in particular being oversaturated, you don’t have to keep it that way. Poco’s software (it’s Xiaomi’s MIUI) allows you calibrate and customise. You can choose P3 or sRGB colour gamuts, or adjust all the settings manually yourself. This way you can choose not only how much red, green and blue light to allow but also the saturation, overall hue, plus contrast and gamma settings.

Our only complaint about the display is that it gets a little dark – especially when watching some Netflix shows. The display’s tendency to be a bit too contrast heavy can effect things, too, so low brightness settings stop it looking at its best.

Performance, of course, isn’t just down to the fluidity of the 120Hz display. It’s got some serious power inside too. Usually when you’re looking at phones in this section of the market you’d typically find a Snapdragon 700 or 600 series processor – but the Poco goes one better. 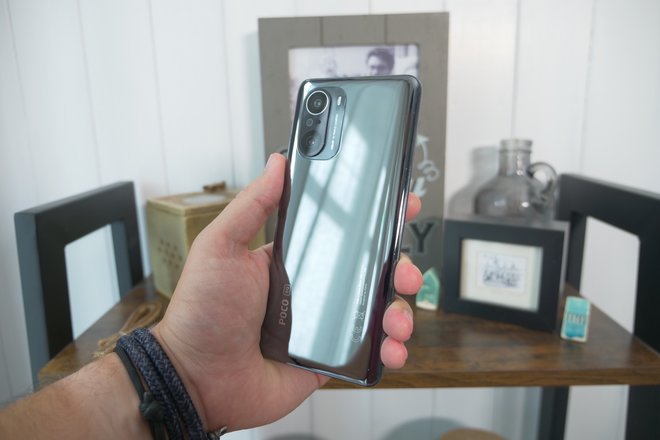 The Qualcomm Snapdragon 870 in the F3 is almost top tier level performance – the same as you’ll find in the Vivo X60 Pro – and that means everything is virtually as fast as if you were using a high-end Android phone. Launching and playing top games is a breeze and the animation response from general areas of the interface is almost instantaneous.

Now, of course, if you were to do benchmarks you’d find lower numbers in the results than if you were to compare it to a Snapdragon 888 toting device. But in real daily use, you’d be hard-pushed to find too much difference between the reactions and loading times from the F3 compared to much more expensive rivals from the likes of Samsung, Xiaomi or OnePlus.

Even the F3’s battery life is up there. It’s 4520mAh, which is on par with typical capacity in large Android phones, and it’ll easily get you through a full day without problems. We averaged around a day and half per charge, but that’s partly down to some aggressive battery management within the software. 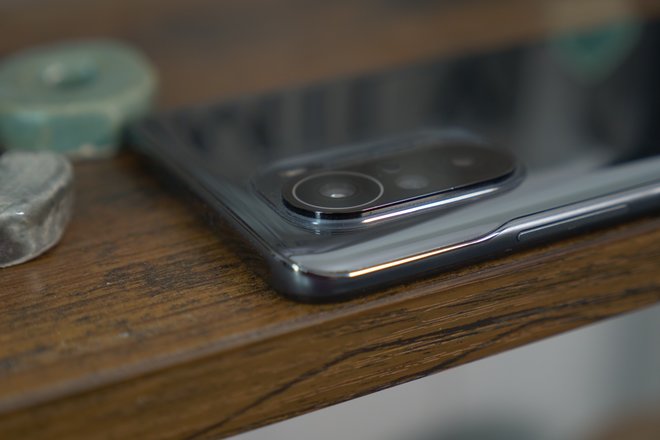 This battery management does sometimes mean you miss notifications, unless you go into your favourite app settings and make sure it’s allowed to stay open without limits. That’s a bit of a faff to sort out if you don’t know there’s any issues, but it’s a long-standing ‘issue’ with Xiaomi’s MIUI that we’d like to see changed in the future.

The other software quirk we didn’t enjoy is the additional interface when installing apps from the Play Store. It checks to see if it’s safe, despite the Play Store already having its own Play Store Protect feature, which means a checking screen interrupts whatever you’re doing. There’s nothing you can do about this either.

Even the camera is decent when considering the F3’s asking price. Granted, you don’t get the same quality as you would in something like the Samsung Galaxy S21 Ultra or Oppo Find X3 Pro, but the main camera in the triple system at the back is more than capable of taking sharp, vivid shots.

At times, however – especially when trying close-ups – we found it got a little too dark and contrast heavy, sometimes with a little too much saturation when the AI system kicks in to process what it thinks are the best settings for the scenery.

We don’t think it’s the hottest camera in its price bracket. When we compared it to the camera on the OnePlus Nord CE, for example, we found the Poco didn’t deliver as realistic an image and lacked a little in terms of natural depth of field too. Still, it’s not bad at all.

The ultra-wide that also features is a weak point though. It alters colours compared to the main sensor and shots are often a bit more blurry, likely due to lack of stabilisation. It’s not great at focusing on closer-to-camera objects either, so it’s best just to keep this one for when you want to take extra wide landscape photo or similar.