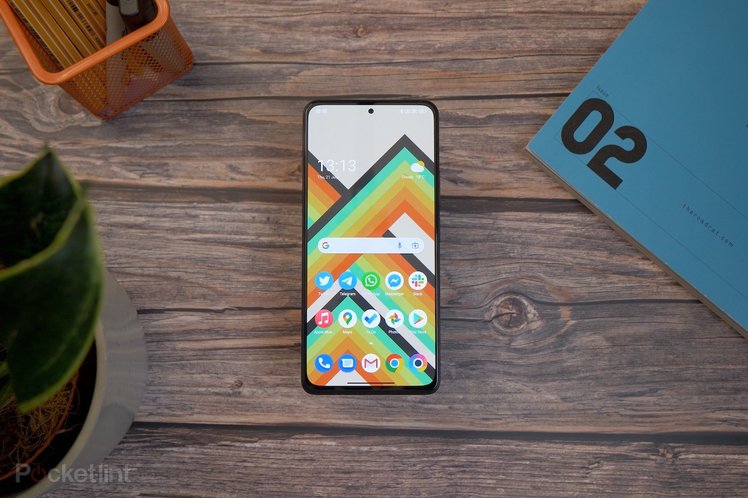 Nowadays, lots of phone makers like to boast about how their device is the most competitive device in its price range – and we often see the “best value for money” tag bandied about with little care.

In 2021, however, Xiaomi sub-brand Poco bucked that trend.

With the Poco F3, we saw the company deliver a flagship-level device for roughly half the price, making it arguably the best mid-range phone on the market.

So, how do you follow up on a success like that? Well, that’s the task of the Poco F4.

With it featuring the exact same chipset as the F3, though, does it improve things enough – or is this just the same phone in a different body?

One of our favourite things about the Poco F3 was the design. It wasn’t especially flashy, but it was still comfortable to hold despite also being a bit of a slippery fingerprint magnet. The curved edges meant it would sit nicely in the palm, alleviating some of the usual discomforts that come with having a big phone.

For the F4, however, Poco jumped on the trend of releasing a squared-off device with flat edges. In doing so, the company took away some of the appeal of the previous model, while also ensuring it just blends into the smartphone market, rather than stands out.

The camera unit on the back is neat enough, with a square unit protruding from a rectangular base, placed in the top left corner of the phone. As is usual these days. Both front and back are covered in glass. In fact, pretty much everything about this phone’s design could be described as ‘pretty standard’.

That means the display takes up practically all of the front surface area, with skinny frames up the sides, a tiny hole-punch camera at the top, and a slightly thicker bezel on the bottom edge. 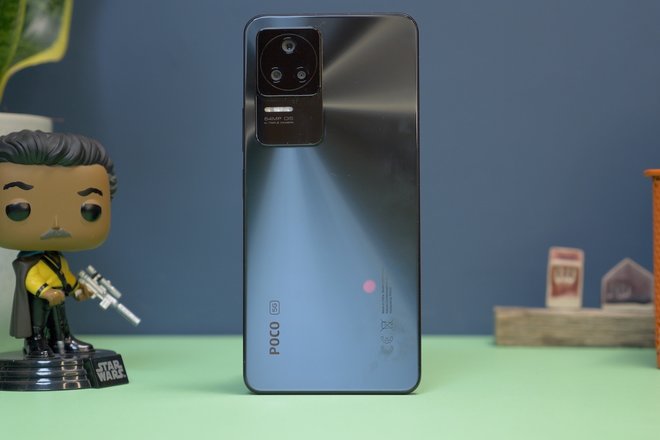 As a unit, it feels relatively sturdy. Despite having a plastic frame, it’s got a solid feel to it, and the IP53 rating will ensure it should survive minor accidents with water. It is quite large, though, making it a bit of a pain when trying to reach elements near the top of the screen while using it one-handed.

As far as buttons and ports go, it’s got the basics, but not everything. There’s no headphone port, for example, and there’s no microSD card slot, either. Whether or not you need one is another matter, given that it ships with 128GB storage as standard.

There is a physical fingerprint button built into the wake/sleep button on the side. Like its predecessor, this works well. It’s quick and responsive to unlock the phone, and we’ve not had as many accidental or ‘phantom’ touches with it as we’d experienced with the Poco F4 GT.

As displays go, the full HD AMOLED panel on the Poco F4 is very good – especially for a device in this price range. Not only is it bright – reaching peaks of 1300 nits – but it also supports up to 120Hz refresh rates and even has support for HDR10+ and Dolby Vision. In short: it’s a very dynamic display. 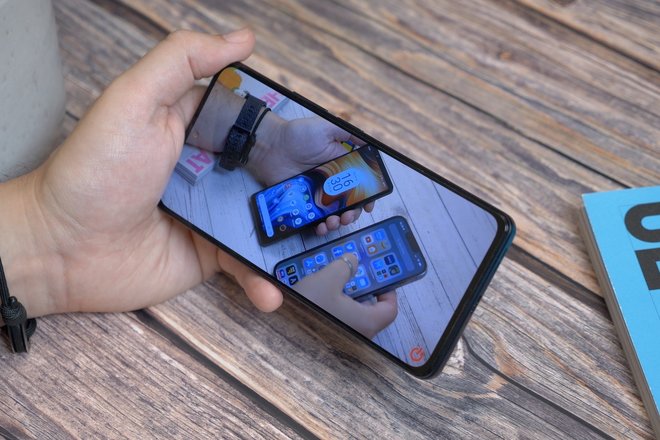 The thing that immediately stood out to us upon powering it on was how bright and vivid it was. Plus, with 395 pixel-per-inch sharpness, it’s plenty crisp enough that you don’t ever see individual pixels.

In fact, with this combination of sharpness, brightness and contrast, it’s comfortably one of the best displays in the mid-range phone market. The colours are lively and vibrant, and the dark elements are very dark.

Part of the beauty of this display lies in the settings though. Its default colour scheme is ‘Vivid’, which sometimes has the tendency to push certain colours a little too far on the saturation front. Reds, oranges and pinks, in particular.

However, if you head into the colour scheme settings, you can tune the panel to your preference. Even to the point of adjusting contrast, gamma and white balance. So, if you want the colours to pop more, choose ‘Saturated’. Otherwise, you can choose ‘Original Colour’ for a more muted look, or choose either P3 or sRGB in the ‘Advanced’ options. 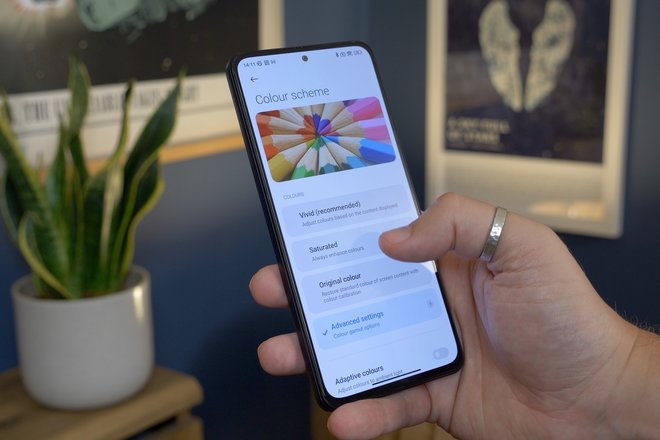 This is one of the good sides of MIUI, Xiaomi’s Android skin, which is loaded on top of Android 12. This software skin certainly has its quirks, and this is something we’ve noted in other Xiaomi, Redmi and Poco reviews this year.

It’s nothing like the ‘stock’ launcher that runs on Pixel, and also introduces a number of unnecessary layers, like the separated notifications shade and quick setting/control centre, and its insistence that you try its carousel Lock Screen feature where it changes the wallpaper throughout the day.

In addition to the great display, there are two speakers: one on either end of the phone. They combine to create stereo audio, although – as is often the case – the speaker on the top edge isn’t quite as strong as the one on the bottom edge, and it’s not as full, either.

It’s a decent enough set of speakers, and they’re certainly loud enough, but they’re also lacking a little in the frequency range to truly make them exceptional.

Poco’s biggest dilemma when launching the F4 was building a device better than the last. But, when it comes to speed and power, the company was a little stuck. If only because the last model used the Snapdragon 870 processor, and there isn’t really a successor to that chipset in 2022. 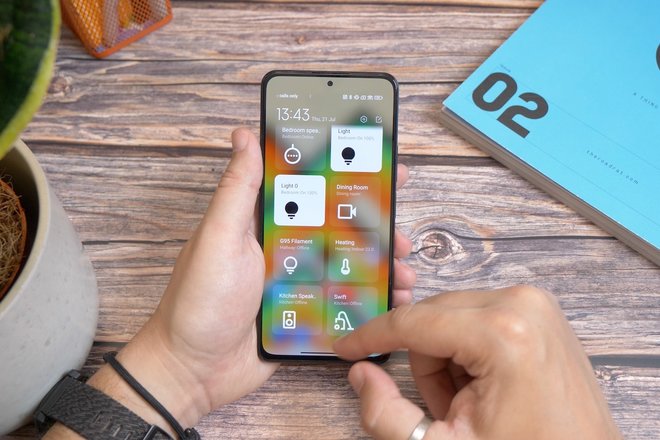 Without jumping up to the ‘true’ flagship platforms like the 888+ and 8/8+ Gen 1, and encroaching on the top tier market (and probably making the phone more expensive), there wasn’t a lot Poco could do. Of course, dropping down to the 700 or 7 Gen 1 series wasn’t an option, either. So, the 870 it is.

This – unsurprisingly – means the performance and speed of the phone are pretty much exactly what we got from its predecessor. Not that this is a bad thing; it’s still a very quick and responsive device that’ll load any game titles without much of a fuss. In fact, in a lot of daily interaction, you’d be hard-pressed to see much difference between this and a phone running the Snapdragon 8 Gen 1 or Snapdragon 888.

Crucially, it also means you’ll have more power at your disposal than if you were to buy a similarly priced phone from a competitor. Galaxy A-series phones from Samsung aren’t close to working this quickly, and the Nothing Phone (1) has a lower-tier processor. 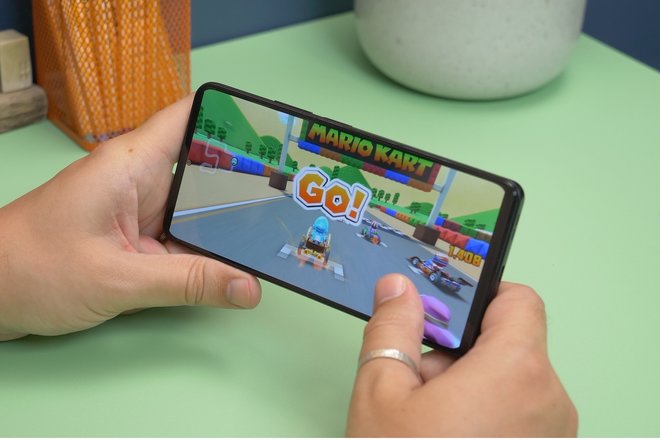 One phone that likely is comparable is the MediaTek Dimensity 1300-powered OnePlus Nord 2T, which has a similar approach to speed and fluidity, but it is a tiny bit more pricey.

It doesn’t get overly warm under load, either, as some devices can. Even after 15-20 minutes of constant gaming we only felt it getting slightly warmer, and this tested during one of the warmest days of the year in the UK.

If there’s one thing on the spec sheet you can point to as something that has been objectively improved from the F3, it’s the battery and charging. Well, more technically, just the charging speed. The battery capacity actually dropped from 4520mAh to 4500mAh, but the charging speeds have virtually doubled.

With its 67W wired charger, you can completely refill an empty battery in about 38 minutes. And, like most fast-charging tech, the bulk of that is done in the first 15-20 minutes. 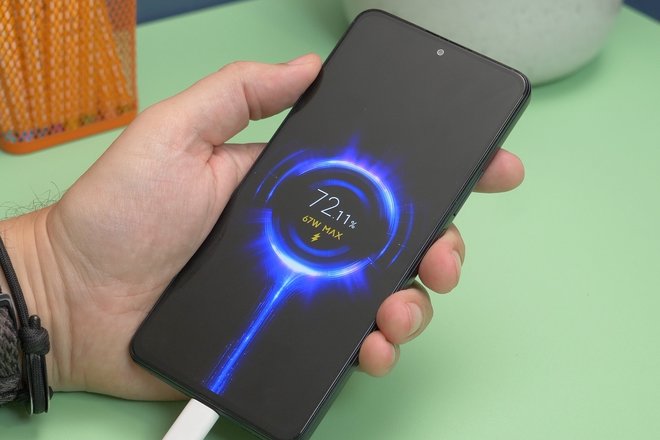 It’s the kind of speed that allows you to charge it whenever you want, rather than charging it every night out of habit. Just plug it in when it’s drained, and pick it up again half an hour later and you’ll have more than a full day’s use from it.

It does comfortably last a full day, too. With most of our screen time in a day going through our usual motions of doom-scrolling on Twitter, chatting on Slack, reading the news, watching the odd short video and doing a little gaming, we’d finish the day with anywhere between 35-45 per cent left over.

Price-wise, this is a mid-range phone, and that means you get a fairly standard camera arrangement – a good primary shooter sits alongside a not-so-good ultrawide and a low-resolution macro that’s there mostly to make up the numbers.

Specifically, the primary camera has a 64-megapixel sensor, which pixel bins down to 16-megapixel images, combining four pixels to make it one. And – as cameras go – it’s more than capable of producing some good shots.

It has no trouble pulling together sharp, colourful and good-looking images outside in good daylight. Colours are a bit vibrant, but they don’t push too far into the realm of hyper-real. It does, however, push the contrast and HDR effect quite hard. But, then again, that’s pretty much on trend for all smartphone manufacturers.

What that means is you won’t get overblown highlights, and even some darker areas in a scene with a bright sky or bright backlighting will show colour and detail. It does sometimes mean the very dark parts of the image are a bit too heavy and crushed, but it’s not a bad look.

Where the sensor struggles are when levels of light drop a little. Away from bright light sources, we started to see noise creep in – particularly in the shadows.

The ultrawide struggles even more to balance the light and dark parts of the image. It leaves some brighter areas over-exposed and lacking in detail, while darker areas are far too dark and shadowed – particularly in lower light or indoor situations. Colours and detail are lacking, too, giving quite a rough, flat image at times.

Again, however, in bright daylight, the ultrawide will give you an image that’s more than acceptable for sharing, with rich colour and contrast.