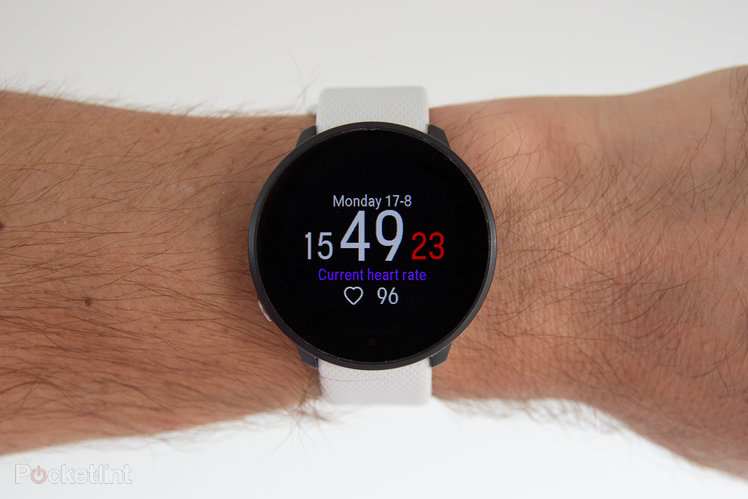 The Polar Unite takes the shift in design and focus that was introduced in the Polar Vantage back in 2018 and rolls it down to the entry-level. It’s been part of an update plan across Polar’s devices, with the Unite sitting just below the Ignite, with which it shares many features.

The aim of the Unite is to offer core lifestyle and exercise tracking features; it’s not aimed at the seasoned athlete and the lack of onboard GPS is a testament to this. But as a package, it is a pretty attractive sports watch.

Polar’s devices have become a lot more refined in recent years, pushing back bezels and moving to a round colour display to give them a more conventional look. That’s something the Unite pulls off with some style.

This is a watch that’s not bulky like many sportswatches; it’s slimmed down so it’s pretty low profile on the wrist too. That will have immediate appeal to anyone looking for a smaller fitness tracker – perhaps those considering some of the fitness bands, like the Fitbit Charge 4. 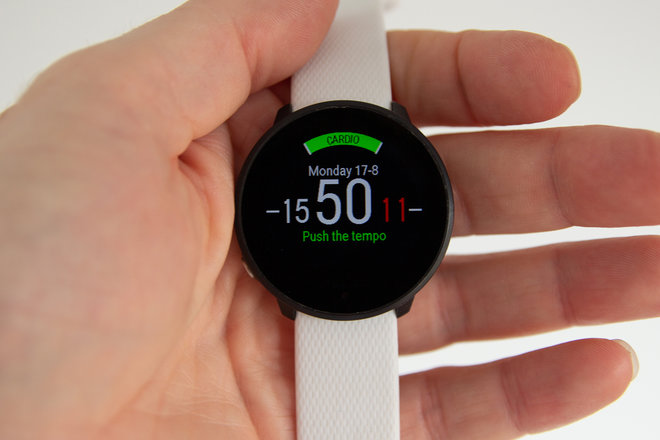 The body of the Unite is approximately 44mm in diameter and only 10.4mm in thickness, with a display that’s approximately 31mm in diameter (about 1.22-inches). That leaves a small bezel around the watch, which could be useful display space – but that’s not the biggest drawback of the display.

That negative comes from this watch’s ‘flat tyre’ design. Rather than having a perfectly round display, Polar has chopped off the bottom and used that as a place to put its logo and the ambient light sensor, so it’s not all round. That cheapens the overall effect and we think it could have been accommodated elsewhere.

In truth, the overall look of the Polar Unite is very close to the Polar Ignite, although that step-up model has a slightly more premium bezel, so will offer a more eye-catching design if that’s what you want. 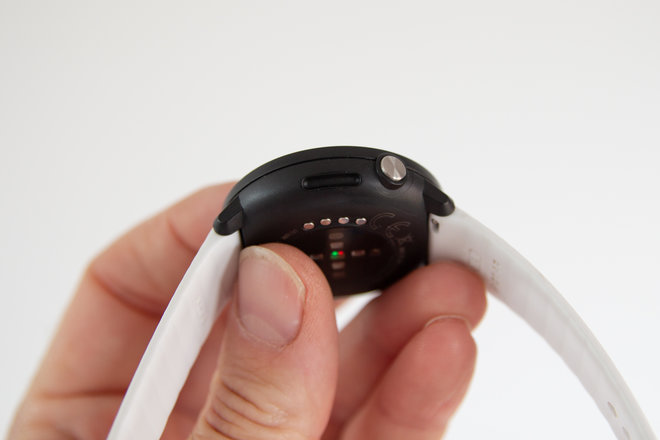 As it is, the design of the Unite is good. The body is tough polycarbonate, and we like the simplicity of that design. There are a range of colour options for the straps, which are easy to release and swap. The whole package is also waterproofed to 30 metres, so it’s fine for swimming.

That means that most of the interaction is via touch. Touch is used to swipe through the difference screens, to swipe up smartphone notifications, or to select the workout that you want to do. It’s responsive enough, but it’s not an always-on display – it shuts off to save battery, awakening when you lift the watch. 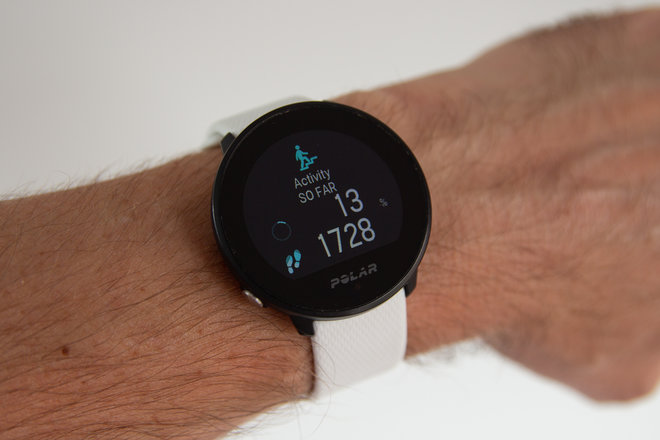 That awakening action has to be rather a deliberate too. That’s just fine when you’re strolling down the high street, so it doesn’t randomly switch on and off, but means that you can’t glance when exercising without a much more deliberate lift of the arm. That’s a slight downside when you’re in the zone and wondering if you’re on target for a personal best but end up struggling to get the screen to illuminate.

There’s another downside which is a little more technical: when the display wakes, it wakes the screen showing what was on it when it turned off. Glance at your watch and you’ll see old data, which will be shown for a brief moment before it updates. This might sound like a minor point, but we’ve been caught out by it many times, glancing when riding, seeing old data and wondering why the heart rate displayed didn’t match that which we perceived.

It corrects itself soon after, but again, when exercising, these glances are brief – you don’t want to be taking your eyes off the road on a fast downhill descent for any longer than absolutely necessary. 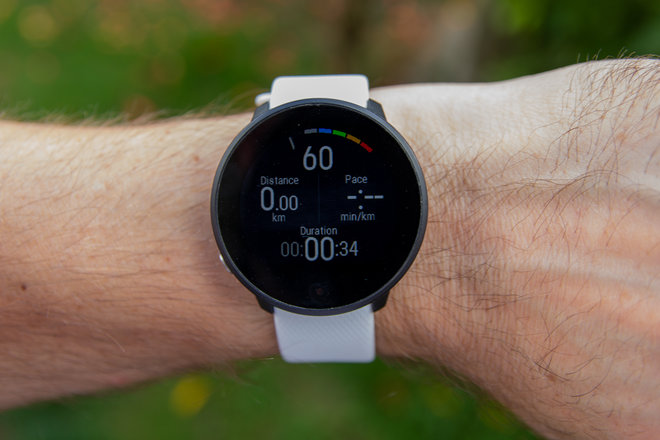 The heart rate is always shown around the edges of the display, broken down into zones, so you can easily check where you are on that scale to ensure you’re working at the right intensity.

The Polar Unite’s biggest fitness feature is the Precision Prime heart rate tracker on the rear of the watch. This claims to be more accurate than many, although we’ve not always found that to be the case. The first iteration of this system needed time to settle in the Vantage V, with a number of software updates, and again in the Unite we find it’s a little slow to react to changes and frequently is on the low side for readings.

That often results in a resting heart rate that’s reassuringly low, and slower heart rate rises than you’d expect once you start an activity. Comparing data from the Polar Unite and the Garmin Fenix 6 Pro and, on a number of occasions, Polar often starts lower than Garmin and fails to reach the same peaks. In many cases the average is close – within 5bpm over a 90 minute workout – but it’s not as precise as you might want it to be.

At other times we’ve found the Unite to struggle to return an accurate reading, dragging down averages and leaving some strange HR traces that don’t reflect the experience of that activity. Ultimately, if heart rate accuracy is what you’re after, the Polar Unite doesn’t seem to be quite on the pulse.

There’s no GPS, as mentioned, so things like speed and distance are dependent on getting a GPS reading from your phone via the Polar Flow app. For cyclists or walkers that’s fine, but for runners – unless you absolutely always take your phone – it’s a bit of a limitation. Essentially, if you’re looking at this watch with running in mind, we’d urge you to consider something with integrated GPS, like the Polar Ignite or the Garmin Forerunner 45.

With that said, the data when connected to a phone is pretty good from Polar – we’ve only had one occasion where we didn’t confirm it was connected before getting started, leaving us with no route data for that particular session.

The feature set of the Polar Unite extends a lot further than just tracking your exercise. Of course, it’s setup to do so, allowing you to select the activity you’re doing and log those miles, but nowadays devices track so much more.

You get 24/7 heart rate data (if you don’t want it, you can turn this off) as well as step tracking to keep an eye on how active you are outside of actual workouts. This is also combined with sleep tracking, with the watch detecting when you’re asleep, tracking your sleep stages and giving you data for that sleep when you wake in the morning. 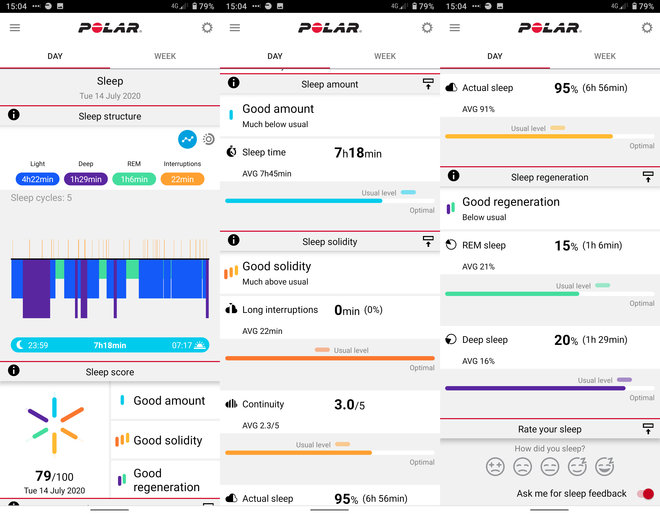 It’s a useful system – something rivals Garmin, Fitbit and soon Apple will offer – and this really plays into the recovery side of a healthy lifestyle. The data that the watch gathers will guide you towards the sort of exercise you should consider doing, with the FitSpark training guide suggesting workouts based on your profile and recovery status.

If you’ve have a bad sleep, it’ll be recommended that you might want to rest instead. However, the approach that Polar uses to categorise sleep isn’t always sound: if you’re static in the evening, like watching TV, the Unite will decide you’re asleep and start logging sleep data. Then, when you go and get ready for bed, put out the bins, set the coffee machine, and so on, it will log all that activity as disturbances to your sleep – and say you’ve had a terrible sleep, even if you then go and have a good solid 8 hours of kip.

There also doesn’t appear to be any way to edit this data, because knocking off the time you were actually awake on the sofa would lead to a better overall sleep score. We got into the habit of removing the watch in the evening to avoid this, but a simple way to confirm when you actually went to bed would be handy. 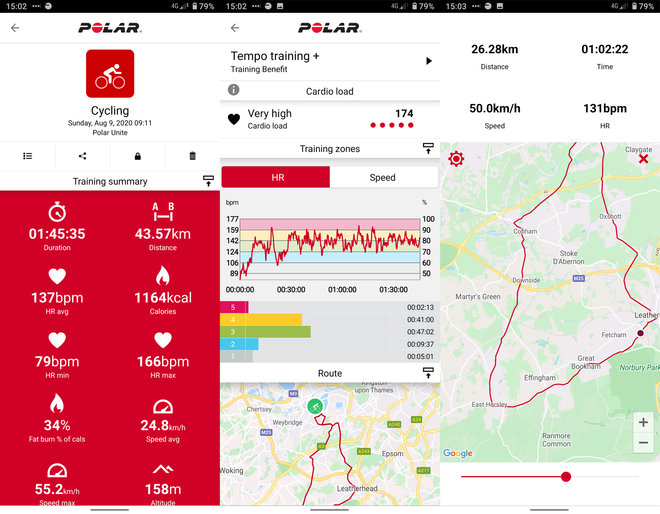 Guided breathing to help you relax also gets its place in the Unite. There’s also FitSpark, which we’ve mentioned already, which is designed to give you a range of idea for workouts – divided into strength, cardio and supportive. If you have no training plan then FitSpark is a starting point. Some things you can do at home easily – like the bodyweight workouts – while some are designed for those with access to gym equipment.

All the data from your watch is synced to the Polar Flow app on your phone – and onto the Polar Flow website too. That makes analysis of your data easy, although we’ve always had the feeling that Polar Flow is more interested in whole lifestyle tracking, as the default view is your activity through the day.

You can also integrate the data with other services, like Strava, Komoot, and so on. This will mean that anything you track on your Polar Unite you can then view on those other services.

The battery in the Polar Unite is pretty small, because it’s a physically small device – but the lack of GPS means there’s less drain on that power. Polar says you’ll get 50 hours in training mode or four days in watch mode with continuous tracking. Fortunately, because of the small battery, it will charge pretty quickly.

Battery life will, of course, depend on what you do with the watch, how much time you spend interacting with it, whether you have smartphone notifications appearing on it all the time, and so on.

We’ve found it to last a little longer than five days when not being used to record training – although this includes some periods not wearing the watch. Conversely, we’ve found that it will only take a couple of training sessions before the battery is mostly depleted, so when Polar says 50 hours, that’s not 50 hours of event tracking, it’s more like two training sessions on consecutive days before you’ll need a charge.

There’s no charging cable in the box, instead there’s a connector you attach to the watch that then plugs into a USB socket. It’s more like a USB stick and for those used to using USB on a plug socket or computer, it just means you don’t have another cable to mess around with. It also might mean you have to have your watch at floor level when plugged in.