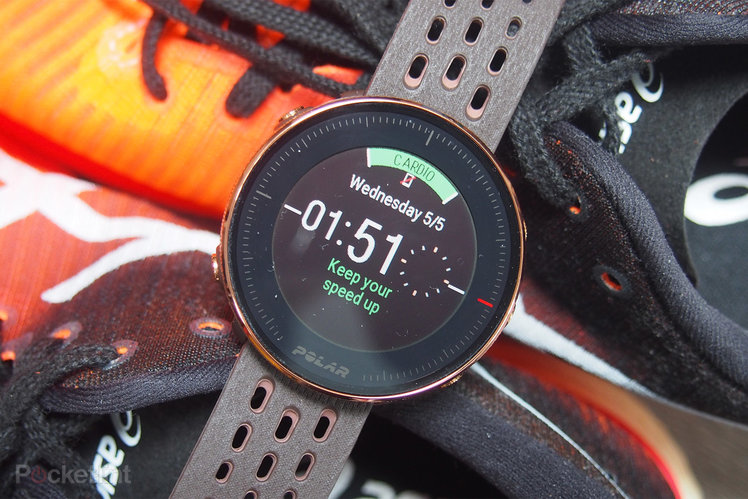 The Polar Vantage M2 is a sports watch for anyone who’s ready for a bigger hit of training stats, but doesn’t want to spend the really big money to get them.

The follow-up to the Vantage M seeks to bring in more of the features from the pricier Vantage V2 and Grit X and also offer a look that feels a lot less sporty.

Polar is slowly embracing more smartwatch features onto its watches, with the emphasis still on giving you everything you need to track your workouts and train smarter too.

With the M2, Polar has taken the original Vantage M and tried to make it more attractive. It’s still the same 46mm-sized round watch case, also the same thickness, just slightly heavier – but not in a way that you’d actually notice.

There’s a choice of two strap sizes, which are both the silicone kind with a perforated design to make it a more breathable band to wear. There’s also a stainless steel watch buckle to make sure it’s one that doesn’t budge. These are straps you can easily remove with the pin mechanism on each end of the strap.

Polar offers the M2 in four case-and-strap combos, with your pick of black and grey, gold and champagne, grey and yellow, and brown and copper. If you want to change things in the strap department there’s textile and leather options to pick from, the aim is to make things feel a bit more fashionable and fun.

The brown and copper case isn’t the kind of colour combination you’d associate with a sports watch, but it worked for us while still offering something that feels like you’d want to work out with – and not immediately take it off when you’re done getting sweaty. 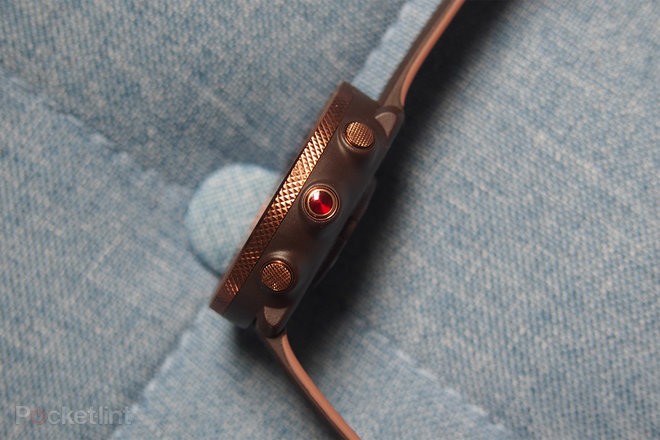 On the polymer watch case there’s now a textured, stainless steel bezel that is, again, a move to make the M2 feel like less of a traditional sports watch.

Front and centre is a 1.2-inch display – but it’s not the touchscreen kind. Based on our experiences with Polar’s touchscreen-toting watches, that’s not actually a bad thing, as we actually prefer the use of the five physical buttons to interact with the Vantage M2.

Polar has sought to offer more in the way of smartwatch features, which is something we’ve seen Garmin do on all of its watches in recent years. Polar still doesn’t match what Garmin offers, but things seem to be going in the right direction.

You can view notifications from synched Apple and Android phones, but you’re unable to respond to those notifications on the M2 itself. There’s also weather forecasts and music controls have been added into the mix – the latter works with third-party apps like Spotify with no issue. You don’t get contactless payments or a music player though – you’ll have to look to Garmin and Apple for those.

Polar has introduced its watch face views already on its pricier watches, used to better customise the data that can be shown-off. It might not sound like the most exciting change, but it’s the kind that makes a difference to daily use, and to quickly get a better sense of your real-time stats and weekly training.

When you need to set things up, it’s over to Polar Flow. The mobile app still feels a little too busy for our liking and it’s a platform that still feels best viewed on the desktop version. There’s a lot of data here to get your teeth into – so it might require a bit of reading and absorbing to make sure you make the most of the data-filled app. 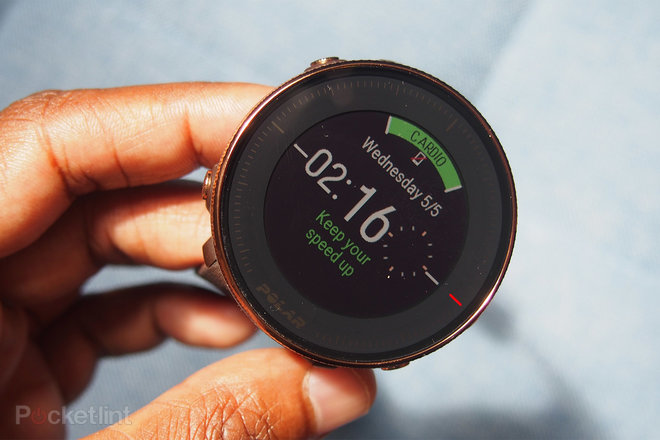 If you do want to bypass Flow, you do have that option too. The M2, like Polar’s other watches, works with the likes of Strava, Nike+ Run Club, and TrainingPeaks. We had no problem pairing it up with Strava to soak up that sweet Kudos.

Along with all of the good stuff we got on the Vantage M – including the great FitSpark suggested workouts – Polar has brought one particularly noteworthy feature to the M2: FuelWise. 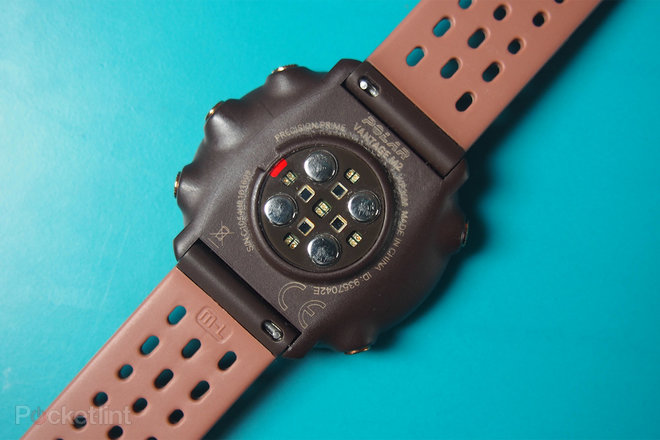 FuelWise is designed to help anyone who struggles to get their fuelling right during races or long days of training. It essentially estimates the amount of carbohydrates you’ll need and fires out reminders during your activity based on energy expenditure, which is based on heart rate data and the duration of the session. It’s a feature that only works on activities longer than 90 minutes and it’s great to see one of Polar’s more innovative features filter down into its other watches to help separate it from the competition.

That’s also joined by Energy Sources, which is another heart rate-based feature that gives you a breakdown of whether you predominantly used fats, carbohydrates or protein to fuel your workout.

These are good features if the sensor information they rely on is reliable. On that front, Polar’s Precision Prime tech does a good job, but pairing up an external chest strap monitor is the way to go if you want to make the most of these features. The watch’s heart rate sensor performed well on most runs and workouts compared to a Garmin HRM-Pro chest strap, but did have its odd moments where the data just didn’t match up and captured randomly high spikes on more high intensity tests. 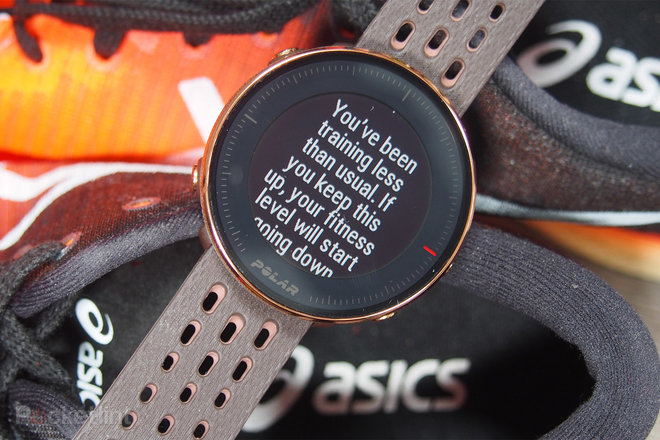 FuelWise aside, it’s much the same on the M2 as it was on the Vantage M. There’s sports profiles aplenty (including swim tracking), built-in GPS and wider satellite system support, and analysis features like Training Load Pro that looks at the strain on the body from training and how it impacts on performance. For runners, there’s the Running Index to get a better sense of your running performance through VO2 Max and the great Running Program that can help you build a plan for races that you can adjust if you can’t make a session.

The key things you’re missing out on compared to the pricier Vantage V2 are the new performance tests designed to assess physical fatigue, a barometer and compass, and the route guidance features. So there’s no ability to upload routes or follow breadcrumb trails in real-time on the M2.

As a fitness tracker, you’re getting something that can track your steps, continuously monitor heart rate, offer guided breathing exercises, and track sleep (including Polar’s Nightly Recharge recovery measurements). Daily activity tracking was in line with a Fitbit tracker during our tests, and there’s pretty simple inactivity alerts to make sure you keep moving during the day. 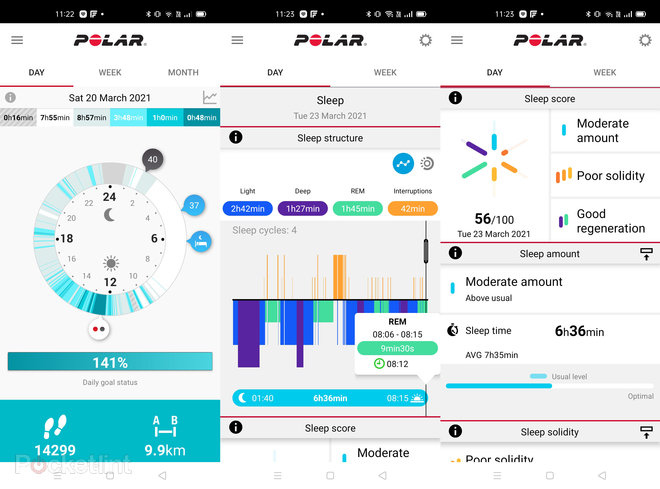 For sleep, the M2 offers all the key staples like sleep stage breakdown and sleep scores – data that’s best viewed in the Flow app. On top of that you’ve got Nightly Recharge measurements, which looks closer at how you’ve recovered from your previous day. It will let you know if you’ve had good recovery during sleep and will give you the nod to train again.

The Vantage M2 packs a battery that aims to deliver up to five days of life in watch mode – and that’s while continuously monitoring heart rate. When it comes to tracking, you can expect 30 hours of GPS battery life, while also tracking your heart rate.

Polar does also include additional power-saving modes that will change the GPS recording rate, turn off heart rate monitoring, and use a screensaver to help you capture longer workouts when your battery is running low. 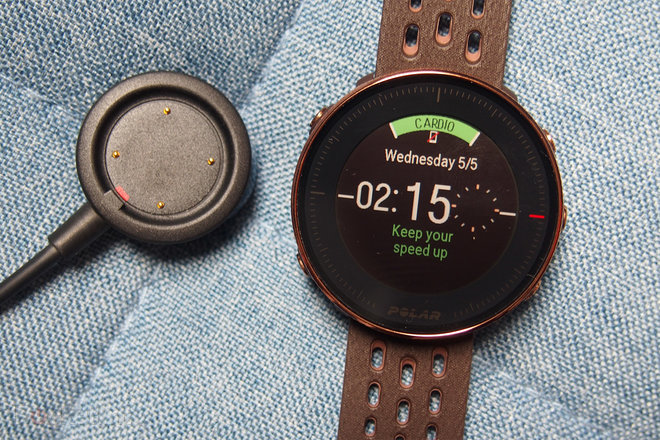 In our use the M2 delivered around four days of battery. That’s with three tracked workouts, monitoring heart rate continuously, and tracking sleep too.

The more advanced sleep monitoring and Nightly Recharge measurements appear to have a noticeable drain on battery, which is something we’ve seen on Polar’s other watches too.

The M2 uses the same charging cable as other Vantage watches, so that little disc cradle clips onto the back of the watch and stays relatively secure if you’re worried it might get knocked out of place.