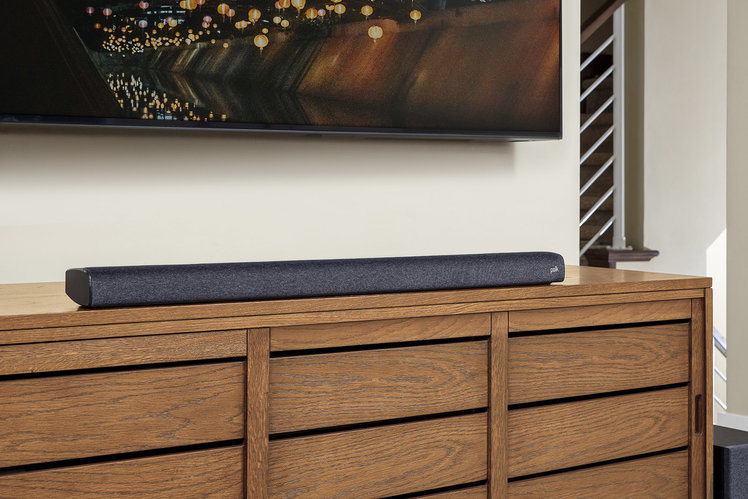 The Polk Signa S3 is an affordable offering from a company that’s really made a name for itself in the soundbar market. This bar’s 2.1-channel system sports a low-profile cabinet so as not to block your TV screen, includes high-quality drivers, plus a beefy wireless subwoofer with plenty of low-end kick.

Features are limited to help keep the price down, but you still get HDMI-ARC, Polk’s Voice Adjust technology, Bluetooth, Chromecast, and the ability to work with Google Assistant. As a result, the Signa S3 might be the ideal solution for boosting the sound on your new big-panel beauty – without breaking the bank.

The Polk Signa S3 keeps things simple with an unassuming and low-profile cabinet that’s designed not to block your TV’s screen or IR sensor. The chassis itself is fairly well made, considering the price, and it’s finished in black with a fabric grille across the front and top.

The soundbar lacks a proper display, instead using a row of four LEDs to provide status information like source, volume and sound modes. But good luck trying to remember the different combinations of lights and colours without resorting to the manual.

The Signa S3 is wide enough to complement TVs with screen sizes of 55- to 65-inches, and you can choose between stand- or wall-mounting the soundbar. If you decide on the latter, there are holes at the rear. Polk also provides wall mount spacers, along with optical and HDMI cables.

The included wireless subwoofer is also well-made, and uses the same styling as the soundbar, with a black finish and fabric at the front. The sub is front-firing, with 80W of amplification to power its driver and a forward-facing bass port for added depth.

The Polk Signa S3 targets a competitive price, and in order to hit it the features have been stripped back. What you do get is a pair of decent speakers, each composed of a 1-inch tweeter plus 1.25- x 4.4-inch mid-range driver, and powered by 40W of grunt. There’s no centre speaker for dialogue, but throw in the sub with its 80W of low-end power, and you have a solid system.

The Signa S3 is limited to 2.1 channels, but able to decode 5.1-channel Dolby Digital. It also includes Polk’s patented Voice Adjust technology, allowing you to choose from three distinct levels to reproduce clear, crisp dialogue and never miss a single word of your favourite movie or TV show. There are also three self-explanatory sound modes: Movie, Music, and Night.

The Polk Signa S3 houses its connections in a recessed area at the rear, and frankly there aren’t many. You get an HDMI port with ARC (audio return channel to push audio without needing anything else), an optical digital input, and an auxiliary input. That’s it for the physical options, but there’s also Bluetooth and Chromecast. 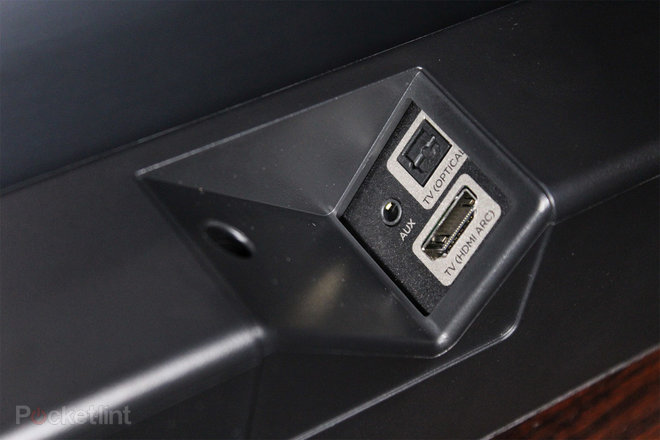 There are some basic touch-sensitive controls on the soundbar itself, which allow you to power the system on and off, cycle through the inputs (ARC, optical, AUX, Bluetooth), pair a Bluetooth device, and change the volume up and down.

The included remote is small but it gets the job done. All the necessary controls are present and correct, with the buttons sensibly laid out. The remote also works with leading TV manufacturers’ remotes to control volume as well as most CEC-enabled TVs. 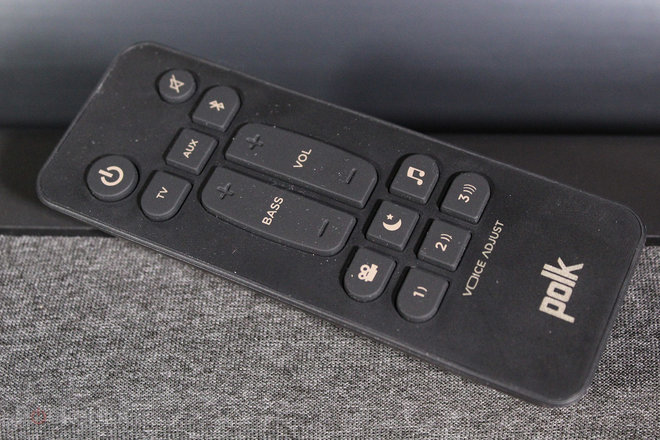 If you have a Google Home speaker, you can use your voice and Google Assistant to control music playback, pause or adjust the volume. You can also use the Google Home app to control the Signa S3 or group with other Chromecast-enabled speakers to play music throughout your home.

The Polk Signa S3 might be a relatively simple soundbar in terms of its layout, but crucially it’s well put together. The company knows how to make a speaker, and as a result the two channels on the Signa S3 are clear, nicely defined and detailed. The width of the soundbar itself also ensures impressive stereo separation and imaging, which is ideal for music and movies. 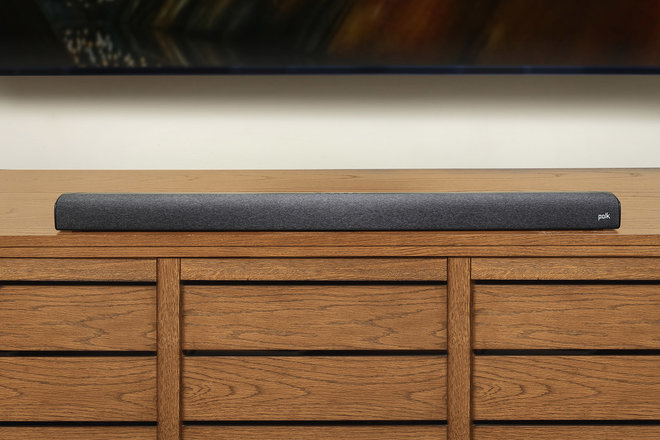 There’s a pleasing sense of width to the front soundstage, making this soundbar a great choice for anyone looking to boost the audio on their new big-screen TV. This sense of scale is enhanced by the dedicated subwoofer, which adds a solid foundation of bass. Polk’s speaker experience comes into play here as well, with an effective crossover ensuring the sub is never overpowering.

The upshot is that the Signa S3 sounds excellent with music, allowing you to take full advantage of all the Bluetooth and Chromecast capabilities. Listening to Do You Realise by The Flaming Lips, you can immediately pick out the various sound effects and eccentric instrumentation. The delivery gives this surprisingly upbeat song about dying plenty of drive and energy. 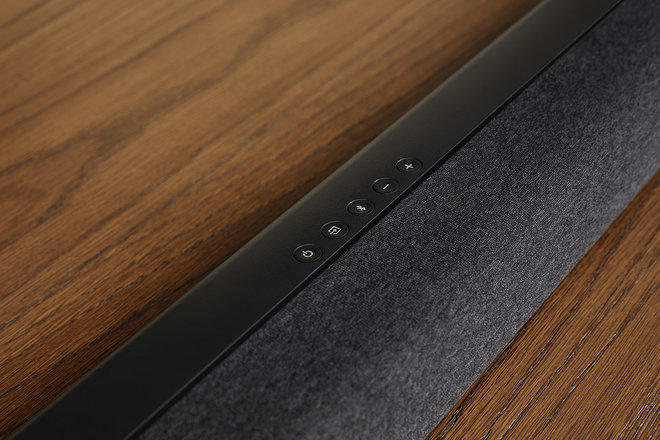 This sense of musicality carries over to watching TV – music and sound effects are delivered with precision as they’re spread across the front of the room. The Signa S3 overcomes its lack of a centre speaker very effectively, delivering dialogue with clarity and focus. As a result Sean Pertwee’s dulcet tones come across clearly in Masterchef: The Professionals.

The combination of the soundbar’s width, the subwoofer’s depth and some decent amplification produces a delivery that has scale and power. This allows the Signa S3 to handle fairly large rooms, and go loud without distorting or losing its cohesion. The second season of His Dark Materials is handled with skill, and there’s some punchy bass that gives the audio greater kick. 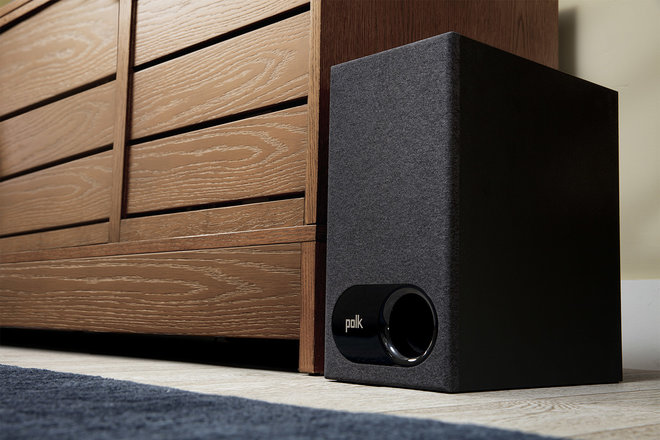 When it comes to movies the performance is equally dynamic, although the decoding is limited to lossy Dolby Digital. However, the resulting delivery is certainly powerful enough to handle today’s blockbuster soundtracks, with a bass-heavy movie like Aquaman sounding suitably epic. The music, effects and dialogue are all delivered with the power of a tsunami.

It should be stressed that when it comes to the Signa S3’s sonic prowess, expectations need to be managed. There’s no sense of surround envelopment for a start, with the soundstage focused at the front of the room, but the delivery is still a major step-up from any TV’s built-in speakers. Ultimately the Signa S3 is a cracking all-rounder that produces impressive bang for your buck.