When it comes to unadulterated picture quality, nothing quite matches up to the crispy deep blacks of an OLED TV mounted within a dimly lit showroom. That descriptor “dimly lit” is important, because take it out in the living room and the stellar contrast of an OLED can be drowned out by reflections. In these conditions, OLED is arguably outperformed by the competing display types that get brighter. That is to say, OLED TVs are not unequivocally superior in all aspects — the technology has its disadvantages, and it’s constantly being iterated over to combat its shortcomings.

Taking CES 2022 by storm, the next big thing in the advancement of OLEDs is what Samsung Display calls QD-OLED, or Quantum Dot OLED. The display company claims that new TVs which use this technology will be brighter, more colorful, and have better viewing angles than conventional OLED TVs. Another exciting development is that this technology won’t be restricted to just TVs, but it will also make its way towards PC monitors — a first for consumer OLEDs sized for actual desks.

This new variant of OLED adds a quantum dot layer to the display stack, a technique that had previously only been used on LCD panels (via QLED). The purpose of these quantum dots is to produce highly saturated subpixels without using an organic high-purity light source of the same color, which are often costly or inefficient. Another method to accomplish this is by using color filters, which is what OLED TVs have been using up until now. 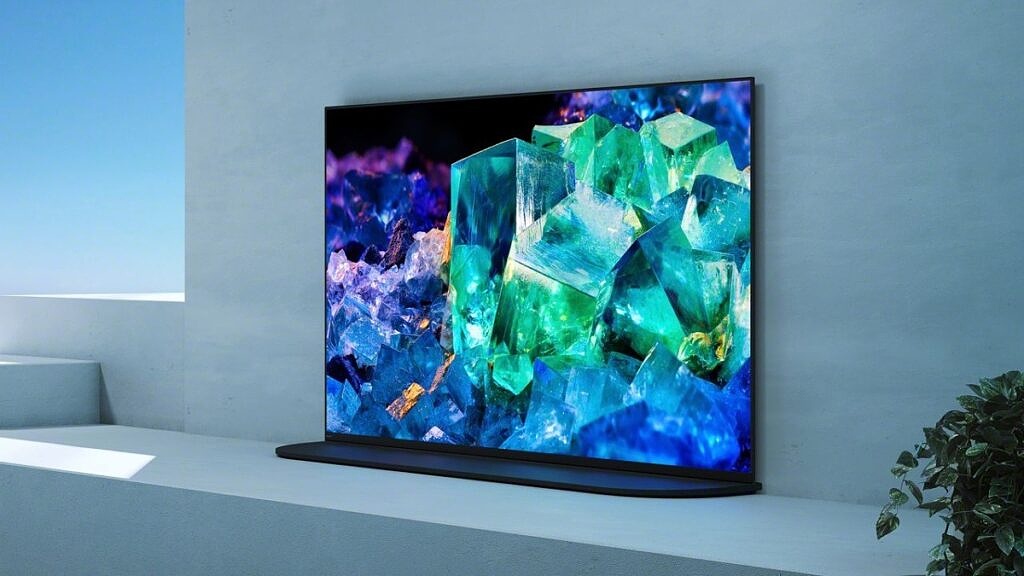 What’s the difference between QD-OLED and older OLED?

To explain this, we first must understand how previous OLED TVs are structured. OLED is an umbrella term that can house various subsets of technologies within. But when marketing uses the term “OLED” for TVs, they are more often than not referring to W-OLED.

For the past decade, LG Display has held a monopoly in the panels used for OLED TVs. These panels were all W-OLED displays that use an RGBW pixel structure, meaning that each pixel is made up of four different-colored subpixels: red, green, blue, and white. However, at its core, each subpixel is actually a white subpixel (hence the term W-OLED), and colored subpixels are achieved with a color filter that blocks out parts of the white light spectrum to produce red, green, or blue. Because light is being subtracted from the light source for the three colored subpixels, this pixel structure is not the most efficient, and it’s the reason why an extra white subpixel is needed. The fourth white subpixel does not have any color filter, and its purpose is for improved efficiency and brightness.

Quantum dots, on the other hand, convert a light source from one color to another, and almost none of the original light source is wasted in this conversion. Instead of starting with a broad white spectrum for each subpixel and stripping away parts of it with color filters, QD-OLED starts with a simple blue light source and converts it into high-purity red and green subpixels while leaving the blue subpixels untouched. 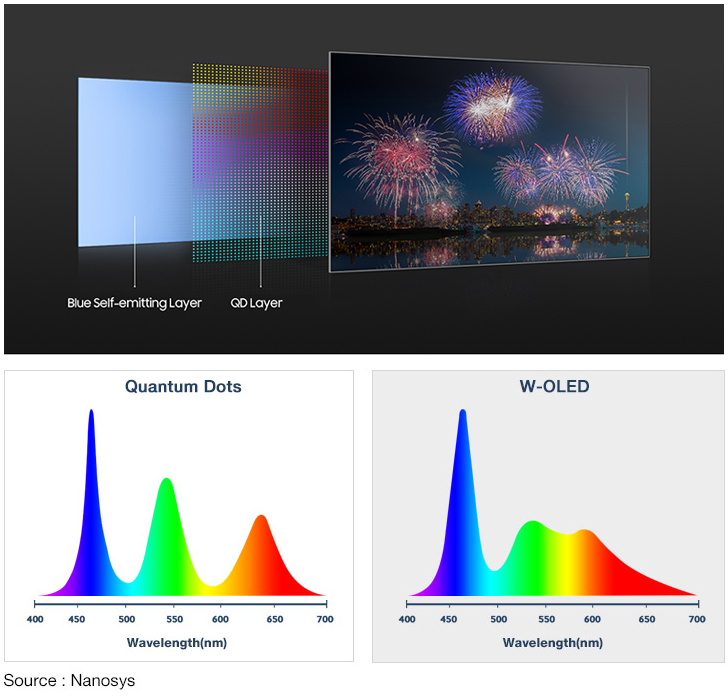 Top: Breakdown of QD layers (source: Samsung Display). Bottom: Light spectrum of QD-LCD vs W-OLED when displaying white. Quantum dots allow for narrower light spectra, which produces higher color saturation. The green and red peaks are derived from passing high-energy blue light through a quantum dot layer, and each peak is associated with its own colored subpixel.

With this efficient method, a fourth white subpixel is not needed, and QD-OLED can make use of a normal RGB pixel structure. One of the disadvantages of current W-OLED TVs is that relying on the extra white subpixel for additional brightness lowers the maximum color saturation as the display nears its peak brightness; the color volume is further reduced since color filters lose effectiveness at high brightness. QD-OLED, on the other hand, can maintain full saturation up to the maximum white level of the display. Additionally, without a fourth subpixel, the RGB subpixels can be made larger to fill the extra space, increasing their luminous output.

Why use a blue light source?

In the visible light spectrum, blue light has the shortest wavelength among red, green, and blue; thus it has the highest normalized energy. The quantum dot layer can essentially confine the higher energy of the blue light down to red or green light, but the opposite is not possible — you cannot use lower-energy red or green light to create blue light.

Why not just use true red, green, and blue light sources? Why go through all this trouble?

The biggest reason is to increase the life expectancy of the display panel. When you’re paying top-dollar for a TV, you probably want it to last a long time. Organic light sources inevitably grow dimmer over time, and different materials will decay at different rates. When a combination of light sources is used, such as with an OLED that uses individual red/green/blue emitters, the varying rates of emitter decay eventually cause the color rendering of the display to drift. For example, many displays will begin to show whites that tint towards yellow over time. Both W-OLED and QD-OLED are display designs geared towards minimizing this effect.

If we take a deeper look inside an existing W-OLED panel, we would find that the white subpixels are actually made up of multiple light sources. Initially, these subpixels were made up of blue LEDs together with a yellow phosphor, but LG Display moved on to using a combination of red, green, and blue emitters to create the white subpixels. These various emitters are mixed and sized in proportions that ensure they would all decay near a constant rate, leading to minimal color shift over time.

What about OLED burn-in?

With QD-OLED, all of the subpixels are backed by the same blue light source, so color shifting should be next to non-existent. However, blue organic materials generally have shorter lifespans compared to red and green materials, so the subpixels in QD-OLED may actually dim faster than W-OLED over time

. This may also mean that QD-OLED could be more prone to burn-in, which occurs when parts of the display have aged noticeably more (or less) than their surrounding. Of course, we’ll just have to wait and see if this becomes an issue.

One nuance here is that the RGB subpixels of QD-OLED can be made larger than in the RGBW structure of W-OLED. Larger subpixel areas improve emitter lifespan.

One other fundamental OLED design is the PenTile subpixel matrix most commonly found in smartphone displays. In principle, it works similar to how W-OLED packs its white subpixels: with a combination of red, green, and blue emitters in varying numbers and sizes so that they decay more uniformly. More specifically, the PenTile design is more abundant with smaller green subpixels since they’re the most efficient, while the blue subpixels are made much larger to lengthen their shorter lifespan.

So, is QD-OLED better than W-OLED?

Now that we’ve covered some fundamentals, we can challenge the obvious question:

Will QD-OLED be better than our existing W-OLEDs?

And the answer is… most likely! Without just re-iterating the marketing material that Samsung Display has released, we find that QD-OLED offers a clear advantage in light efficiency over W-OLED, and the standard pixel structure that it enables allows for higher color volume for HDR and for high-brightness users. The precision of quantum dots also allows for more saturated colors compared to the use of color filters, leading to higher coverage of the Rec.2020 color gamut.

Additionally, QD-OLED omits the polarizer layer, which is conventionally used to reduce reflections at the cost of blocking some of the display’s own light. Samsung Display tells us that the panel structure of its QD-OLED has an inherent advantage in handling reflections, so it’s confident that it can remove the polarizer, which should yield some extra display brightness.

Samsung Display also tells us that their quantum dot conversion emits light omnidirectionally, resulting in lower brightness loss when viewing its TVs at an angle. Existed W-OLED panels already have astoundingly uniform viewing angles, but the display company is advertising its QD-OLED to perform even better

Okay, I want one. What QD-OLED display can I buy right now?

Right now, only Samsung, Sony, and Alienware have something to show for this new tech. At CES 2022, Sony unveiled its Bravia XR A95K, a 4K QD-OLED TV which will initially come in 55″ and 65″ sizes by the end of 2022. For the PC gamers, Alienware debuted a first-of-its-kind consumer OLED gaming monitor — and by this, I don’t mean a TV disguised as a monitor. This 34-inch ultrawide display was a long-awaited reveal that finally brings OLED technology to the PC world at a popular, practical size. Both these screens will use QD-OLED supplied by Samsung Display, which should give LG Display a run for its money. What’s most important is that Samsung Display pioneering this new technology introduces the company as a new prime competitor in the OLED market alongside LG Display. Initially, QD-OLED won’t come cheap — these new displays will likely start out much more expensive than W-OLED. But hopefully, after the tech begins to mature, we should see this competition driving OLED prices down across the board. We may also see QD-OLED becoming cheaper than W-OLED in the future, as it relies on only blue organic material instead of the myriad that LG Display has to source for its W-OLED.

Looking into the future, the next natural progression of OLED is to take out the organic materials entirely, leaving us with an LED display of a different kind. OLED is heavily limited by the effectiveness of the blue organic material, so synthesizing an alternative light source opens up the gates to a whole new generation of screens. Out in the visible horizon, Samsung Display has been working on yet another display tech called QNED, which stands for Quantum Nano Emitting Diode. This design is similar to QD-OLED, but instead of using organic blue materials, QNED uses Gallium Nitride Nanorod LEDs as the light source while still using quantum dots to mold it. We’ll have an explainer for that, too, once it comes to fruition.

The post QD-OLED Explained: What you need to know about the next big innovation for TV and Monitor displays appeared first on xda-developers.