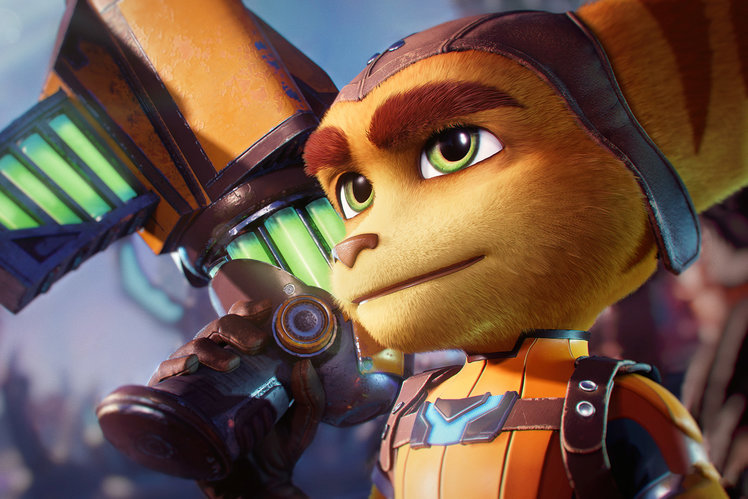 The Ratchet & Clank series has been a PlayStation stalwart for almost two decades. But we’ve not had an original outing since Into the Nexus in 2013 – and that was on the PlayStation 3.

Yes, developer Insomniac Games remade the first game for PS4 in the shape of 2016’s Ratchet & Clank, but it has rather focused its attention on Sunset Overdrive and the superb Marvel’s Spider-Man games instead.

That’s why we’re thrilled to see the return of everyone’s favourite Lombax and his robot chum. And, thanks to the leap to PlayStation 5 proper, they have never looked – or arguably played – better.

Insomniac cut its next-gen teeth on Marvel’s Spider-Man: Miles Morales, plus a dolled-up remaster of its predecessor, but Ratchet & Clank: Rift Apart is its first PS5 exclusive. That has given the studio free rein on a featureset of tools and talents only the latest in Sony’s kitbag can provide.

The entire premise of the game is only possible thanks to clever compression techniques and superfast SSD loading speeds. The graphics drip with ray-tracing and other wizardry from every pore. And the tricks afforded by the PS5’s DualSense controller are exploited to the max. In many respects, this is the first truly next-gen game on any console and has us salivating for what’s possible in the future.

We’re getting ahead of ourselves though. Technical bells and whistles aside, this is a Ratchet & Clank game through and through, so we’ll start there.

Like most others in the series, this is essentially a shooter-meets-platformer with a keen sense of humour and stunning, Pixar-like visuals. It is split across a fair few planets and regions, each with their own puzzles, secrets, bosses and, in the case of some, open-world landscapes.

Favourite elements return, such as crazy, often hilarious weapons, hover boots, rail riding, the weapons shop (which is now in shape of Mrs Zurkon – an enemy in the 2016 remake), and plenty more besides – but there are some key differences too. Not least the fact you play as two Lombaxes this time around.

That’s because, after Dr Nefarious gets his hands on the oft-featured Dimensionator and accidentally opens up huge dimensional rifts, our eponymous heroes are split up. That leads Clank to meet with Rivet, a female Lombax who is new to the series, and Ratchet, to eventually hook-up with an alternative robot pal named Kit. 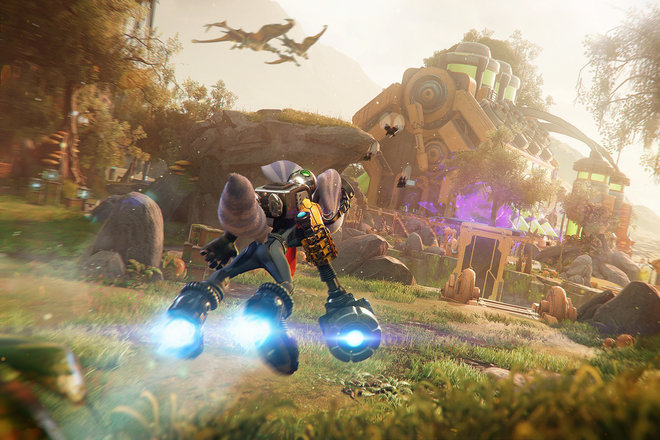 This allows for missions to be split between them all – and provides variety in both gameplay and dialogue. You will often swap characters when choosing which mission to undertake from the navigation screen and likely not return until it is complete – certainly for the first part, anyway.

There are also other-dimensional versions of many recognisable friends and foes, to add extra weight and humour to the story. Certainly, as fans of the series, we loved the references and a few Easter Eggs. However, if you’re new to it, you’ll still get plenty from it – you might even end up seeking older outings elsewhere, such as on PlayStation Now.

Levels in the game will often require a lot of blasting, but are reasonably varied. Some are based on massive open areas that can be explored, a la the R&C remake, others tighter and largely on rails. One thing that ties them all together is the ability to jump through dimension portals to reach different areas in a zone. 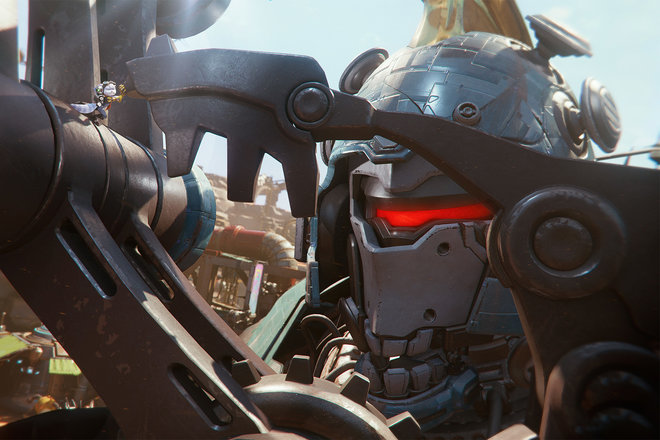 For example, a small rift might appear on an otherwise hard-to-reach patform, so you just focus at it, tap a button, then are instantly zipped over to that location. It certainly helps you get around a map during a battle, zipping through portals to keep ahead of enemies.

Traversing different dimensions is also used cleverly too, with one level in particular requiring you to hop between an existing, thriving world and a destroyed version in another dimension. By jumping between the two, you can get past barriers in one, or solve an otherwise impossible puzzle.

It is here where the PS5 exclusivity becomes obvious. Travelling through rifts or swapping between dimensions is instant – you certainy don’t notice any loading time, even when everything in the landscape has completely changed or you are on a totally new part of the map. Insomniac has previously said that this needs both the SSD and Sony’s clever loading shenanigans to work, and it’s easy to see why.

The DualSense controller is also a necessity for gunplay, as the game uses both haptic feedback and the adaptive triggers as effectively as Returnal (a very different game, but an amazing one – as we said in our review).

Not only do you feel every shot – with the gamepad’s speaker also utilised for some elements – you get different shot options on the right trigger. Press it down halfway and you get one weapon mode, pull it harder and the other activates. It takes a little getting used to, but is intuitive and immersive when you do.

The last, obvious reason why this is a PS5-only game lies not in its gameplay but in its look. This is quite simply the most gorgeous next-gen game yet. Easily the best use of high dynamic range (HDR) that we’ve seen.

As with Miles Morales, the developer has provided three graphics modes: Performance, Performance RT, and Fidelity. 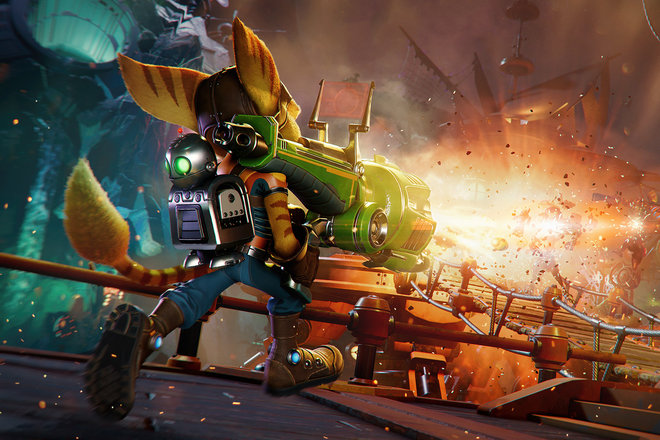 The prettiest – Fidelity – runs at 30 frames-per-second (30fps) but is in 4K resolution with HDR and features ray-tracing, enhanced lighting, additional VFX, and increased scene density. This is the way we preferred to play, even with the lower frame rate. It looks incredible. The different worlds are bursting with details and creativity, so having the enhancements make it for us.

Whichever you opt for, the game is still a stunner. We played it on a 65-inch OLED telly, where the colours popped out of the screen so vividly, but we’d expect it’d look great whatever your TV or display tech. There are also so many instances of neon lighting in the game – not least cascading from your weapons – that it would even be a great reference test for a new HDR TV.

Sound is superb, too, especially the excellent voice acting. And the use of Sony’s 3D Audio tech is great if you have compatible headphones. The spacing in open-world segments is especially good. 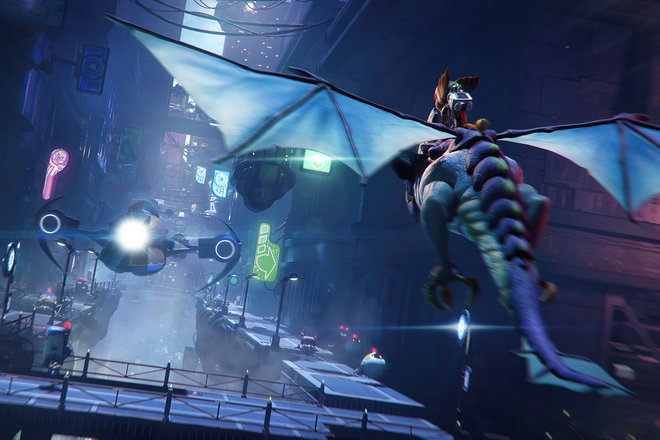 Indeed, our only minor quibbles with the game is that there is a fair amount of repetition in bog standard enemy types and, like with previous outings, it’s a little short.

Still, there are sub-quests on most of the worlds, and there is a decent enough challenge here, with some bosses that will take you multiple tries to defeat. Also, it’s refreshing to have a game that doesn’t take over your life for a month once in a while.