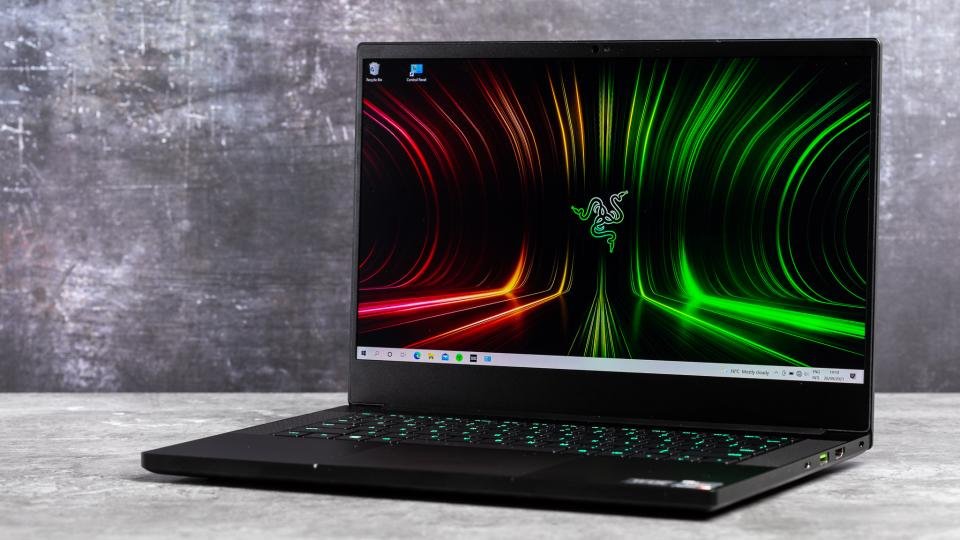 Razer squeezes its signature style and power into a terrific gaming ultrabook, but the Blade 14 isn’t cheap

Compact gaming laptops have come of age recently. This is mostly thanks to product engineers realising that they can just about squeeze an Nvidia RTX30-series GPU into a 14in ultrabook, and voilà: genuine gaming performance in a laptop smaller and lighter than many traditional notebooks.

Of course, that 14in display might be an issue to some who will say, and not without cause, that 14in is a little too small for prolonged gaming. But surely that’s a bit like complaining that your two-door sports car doesn’t have five doors – it’s the nature of the beast.

Razer Blade 14 review: What you need to know

If I’d had to place a bet on which hardware manufacturer would cook up the best RTX30-series compact gaming laptop, my money would have gone on Razer. It pretty much invented the category with the original Blade 14 back in 2015, though of course, that machine was nowhere near as compact as this 2021 model.

Razer is a doyen of serious gaming kit, from laptops and desktops to monitors, eGPUs and chairs (sit in a £500 Razer Iskur chair and you may never want to get up). There isn’t a weak machine in the Blade 15 or Blade 17 lineup and its first assay into productivity, the Razer Book 13, was an impressive debut as well.

What Razer has done with the Blade 14 is take all its gaming laptop know-how and stuffed the latest AMD and Nvidia chippery into a compact notebook that you can comfortably throw into your backpack. It’s also styled the Blade 14 in such a way that you won’t be embarrassed to whip it out at an important business meeting.

All models share the same AMD Ryzen 9 5900HX processor, 16GB of RAM and 1TB SSD. In my view, the RTX 3070 model is the best value of the lot, but it’s the top-of-the-range machine that Razer sent me for review.

The marketplace is hardly awash with 14in gaming laptops, but what competition there is can only be described as fierce. Acer’s Predator Triton 300SE is impressive value for money at just £1,299 and this gets you an Nvidia RTX 3060, a 144Hz 14in display and an Intel Core i7-11370H processor.

The Asus ROG Zephyrus G14 has been widely praised by every technology hack and their mother-in-law, and rightly so. I’ve only crossed paths with its big brother, the ROG Zephyrus G15, but that is a truly superb machine. For £1,799 you can get a G14 with an RTX 3060, 120Hz QHD display and an AMD Ryzen 9 5900HS processor.

If a 14in notebook is just too cumbersome for you, then the Razer Blade Stealth 13 could be worth a look. The 4K, 13.3in screen is super-sharp and at less than 1.5kg it’s a genuine lightweight, but in a good way.

For a fully fledged gaming notebook, the Blade 14 is very small and light. At less than 17mm thick and weighing only 1.78kg it’s eminently portable, and the laptop’s width and depth of 320mm and 220mm respectively mean that it isn’t massively bigger than a 13in MacBook Pro.

The Blade 14 looks and feels like a reduced-scale Blade 15, which is a good thing. The angular black aluminium unibody is cool – physically and figuratively – and solid while the lid doesn’t flex too badly even when given a deliberate twist. There’s a glowing Razer three-headed snake logo on the lid to let the unwashed know what kind of notebook you have, but you can turn the logo illumination off if you prefer to be a little less flash.

Open the Blade 14’s lid and you’ll find a compact keyboard flanked by two speaker grilles. The keyboard deck is rock solid and the keys have a very precise, if rather shallow, 1.1mm action. The glass-covered trackpad works perfectly and has a nicely damped and quiet click action. If I had to pick a hole, it would be that the up/down cursor keys are rather small, but that’s an issue with a lot of 14in laptops. 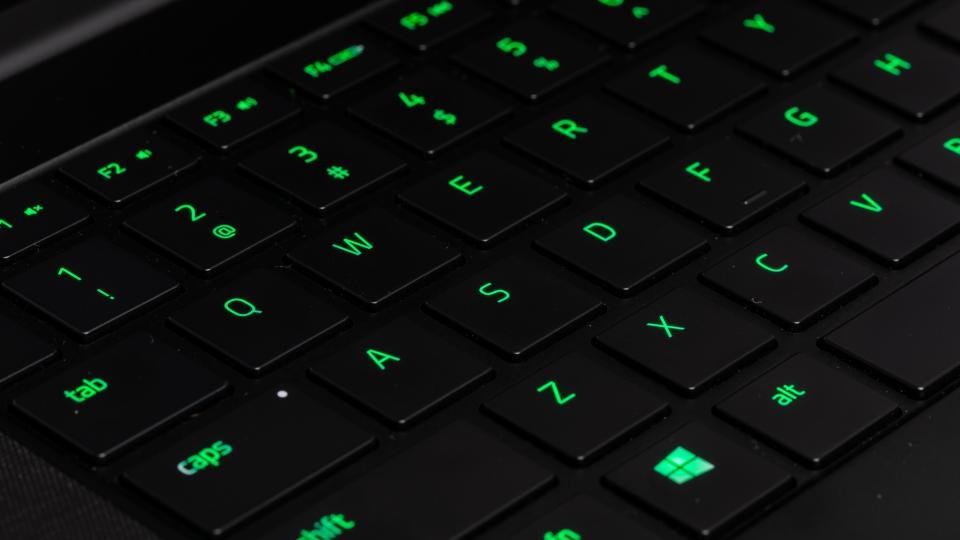 Open up the Razer Synapse control panel and you can access the Chroma RGB software, which lets you set the backlight colour of each individual key and run various lighting sequences. I set mine to pulse in time to the game soundtrack but leave the WASD keys solid red.

Connectivity is well served by two USB-A 3.2 Gen 2 and two USB-C 3.2 Gen 2 ports, along with an HDMI 2.1 connector and a 3.5mm audio jack. Both the Type-C ports support DisplayPort 1.4 and 20V Power Delivery 3.0 charging. That last is worth noting as the bundled 230W DC power supply is a bit of a brick. Above the display sits a decent 720p webcam, but more important than its video quality is the fact it supports Windows’ Hello IR facial recognition security.

Wireless communications are on the bleeding edge; you get Bluetooth 5.2 and Wi-Fi 6E courtesy of an Intel AX210 card, which means support for 6GHz transmissions when they become common.

Take the back off the Blade 14 and the only thing you can mess with is the 1TB SSD. Razer doesn’t advise that you replace this with anything larger than a 2TB module simply because there isn’t room for a double-stacked SSD of higher capacity. The 16GB of DDR4 3,200MHz RAM is soldered in place, so upgrading is out of the question. The installed Samsung M.2 NVMe PCI-E 3.0×4 1TB SSD recorded good read and write scores of 3,078MB/s and 2,580MB/s respectively. 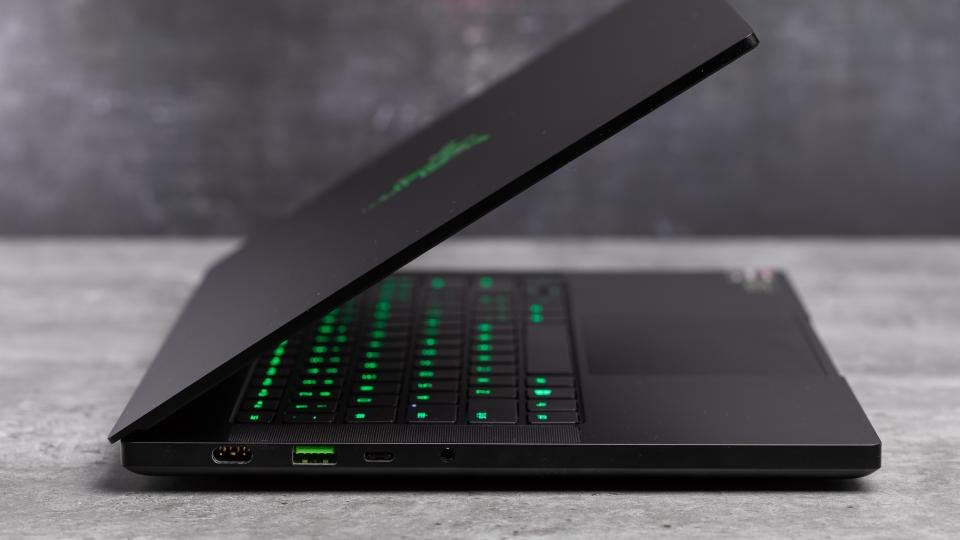 As you’d expect from a 165Hz display, gaming is an impressively fluid experience, something further enhanced by support for the AMD FreeSync standard. The matte finish, meanwhile, does a good job of keeping reflections at bay.

Audio performance is equally impressive for a laptop this small. The THX-certified speaker system pumps out a surprising amount of volume and a respectable amount of treble and bass.

You’d expect the Blade 14 to be a strong performer just by reading the spec sheet. An AMD Ryzen 9 5900HX octa-core processor with a base clock speed of 3.3GHz combined with an Nvidia RTX 3080 GPU with 16GB of RAM is not a combination that’s ever going to be described as slothful or puny.

To get the last lick of speed from the hardware, Razer’s Synapse control panel lets you turn the wick right up by fixing the clock on both the CPU and GPU performance to the maximum possible. Doing this does mean the fans run hard and they are quite loud, a side effect of them having to push plenty of air through a limited space to keep everything cool.

The Razer scored 297 in Expert Reviews’ in-house processing benchmark score, which puts it up there with the very best in terms of productivity performance. The same is true for gaming performance. Our baseline test using the Wolfenstein: Youngblood benchmark returned frame rates of 185fps without ray tracing, 112fps with ray tracing but no DLSS and 134fps when DLSS was turned on. Those scores were recorded at 1,920 x 1,080, while at the native QHD the frame rates were 142, 79 and 118fps respectively.

The Hitman 2 benchtest scored 66fps, though that dropped to 39fps at QHD, while the Shadow of the Tomb Raider test returned 81fps at 2,560 x 1,440 with ray tracing on, DLSS off and detail levels set at the highest possible. Let’s just say the Blade 14 is flippin’ fast and move on. Well, after one caveat that is.

The Blade 14 proved to be one of the AMD/Nividia machines that refused to run Wolfenstein: Youngblood out of the box. I’ve encountered this problem before, most recently with the RTX 3060-powered Acer Nitro 5. The solution is simple enough: download and run the AMD Cleanup utility, reinstall and update the AMD Radeon drivers using the Radeon Software Adrenalin utility, and finally update the Nividia drivers using the GeForce Experience program.

This always fixes what I assume to be a clash between the Nvidia and AMD Radeon graphics software, but you shouldn’t have to do this to run a popular title. However, since it’s not a problem unique to the Blade 14 I’m not going to mark it down.

I didn’t expect great things when it came to battery life from a compact laptop with a QHD display but I was pleasantly surprised. The standard Expert Reviews video rundown test lasted for 11hrs 14mins before everything went dark, which I was more than happy with. If you want to squeeze a little more out of the 61.1Wh battery you can turn the screen refresh rate down to 60Hz.

Is the Razer Blade 14 a faultless machine? It comes pretty close. Some will argue that the display is a little on the small side for prolonged gaming, but I’m not going to criticise a 14in laptop for having a 14in display, and though it’s not exactly cheap at the top end, the entry-level model is good value.

Beyond that, the Blade 14 is an impressive machine in every way: it’s fast, stylish, well made, has a good keyboard and a very decent sound system. It also comes loaded with many of the extra features a hardcore gamer would insist on, while still being smart enough to not look out of place in more sober environments.