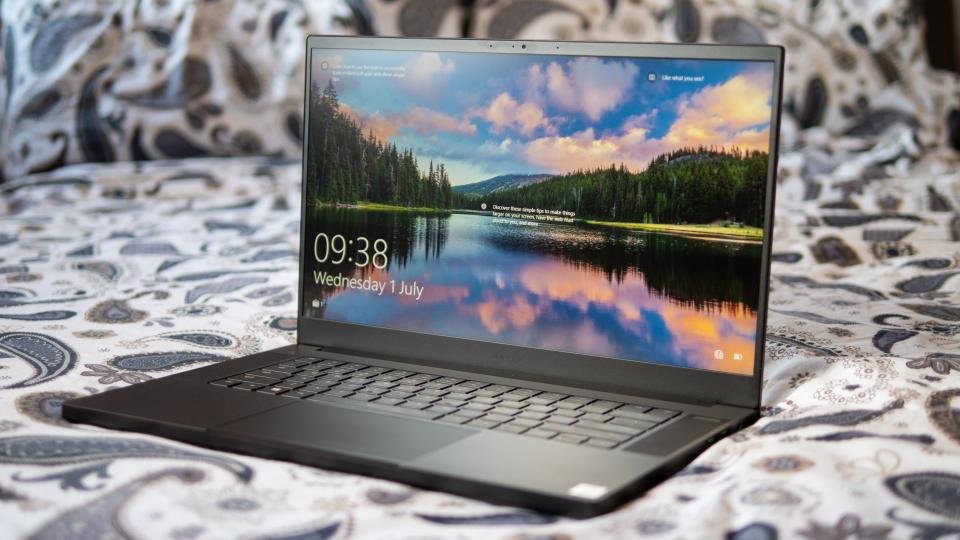 There is something to be said for the minimalism of the Razer Blade 15 (2020). With so many other manufacturers going down the OTT route for their gaming machines, Razer is sticking with its sleek, chic, slab-sided aluminium chassis for the 2020 refresh of its main seller, choosing only to upgrade the display, the performance-critical components and a few other minor bits and pieces.

Despite not much physically having changed, however, the Razer Blade 15 (2020) is still a force to be reckoned with.

The laptop sits in the middle of Razer’s range of gaming laptops, below the Razer Blade Pro 17 (2020) and above the Razer Blade Stealth, which is an ultraportable, intended more for occasional gaming. Effectively, the 15 is the best-value proper gaming machine Razer offers, then, designed to game all day without skipping a beat.

As noted already, aside from a few subtle changes, which I’ll go into below, nothing much has changed on the design front this year. All the main changes have been made to the specifications. 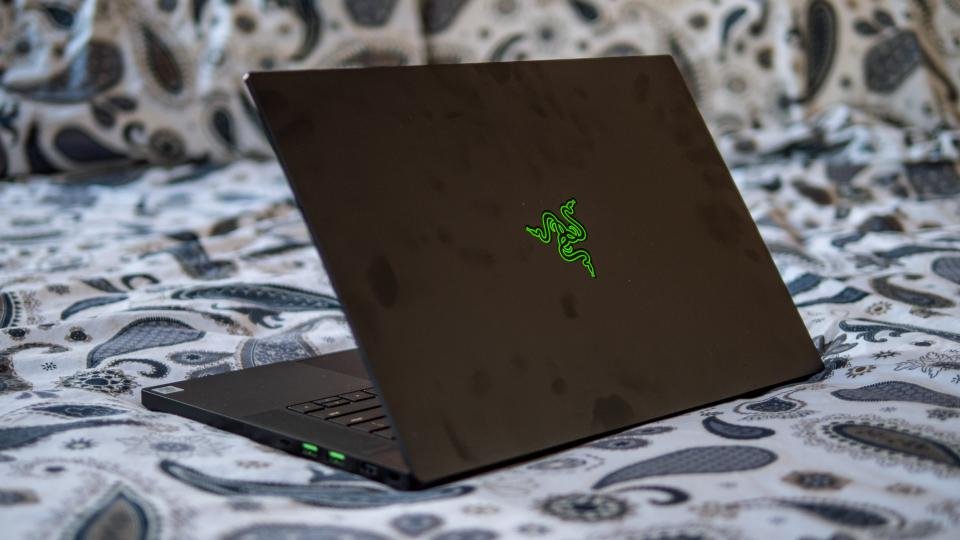 The new Blade 15 comes with a 15.6in IPS display that can be specced with a high refresh rate of 144Hz or 300Hz in Full HD resolution; or as a 4K, wide-gamut OLED non-touch or touchscreen.

Two main variants of the Razer Blade exist: the Advanced Model and the Base Model. Both are powerful and can run the latest games with ease but the Advanced model has some extra features and that bit more juice. 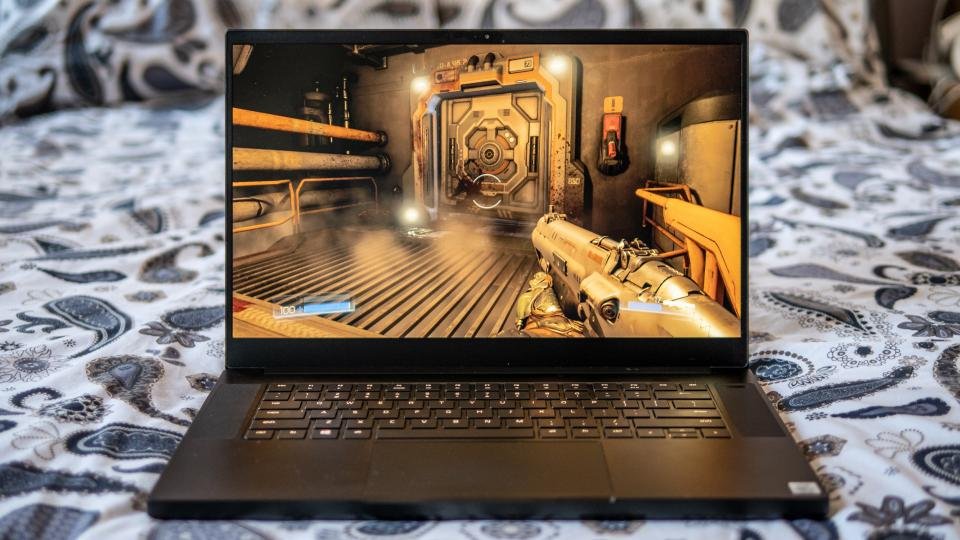 Go the other way, replace the Full HD display with the 4K DCI-P3 OLED (non-touch) screen and the price rises to £2,400, while upping the GPU and CPU increases it even higher. The top-spec Advanced model with the 4K OLED touchscreen, Intel Core i7-10875H CPU and RTX 2080 Super GPU will set you back an eye-watering £3,350.

Those are big numbers, to be sure, but how do these compare with rivals? First up, the Apple MacBook Pro 16in, which starts at £2,399 for a configuration that includes the six-core 2.6GHz ninth-gen Intel Core i7-9750H, 16GB of RAM, an AMD Radeon Pro 5300M and 512GB of storage. That’s £300 more for a laptop with a less powerful GPU but a larger, higher-resolution display, a bigger battery and a slimmer chassis. That isn’t really a gaming laptop, though, and its AMD GPU is no match for the RTX 2070 in the equivalent Blade 15. 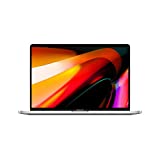 The latest Dell XPS 15, which we haven’t yet reviewed, is slimmer and lighter than the Blade and more expensive for the closest equivalent specification. Again, this isn’t a gaming machine, and doesn’t come with the option of a high refresh rate display either.

The closest competitor we’ve reviewed so far is the Gigabyte Aorus 15G XB, which we tested with a Core i7-10875H, 16GB of RAM, an Nvidia RTX 2070 Super and 512GB of storage for £2,199 (with the regular RTX 2070 it’s £1,999). This is most definitely a gaming machine, comes complete with a mechanical keyboard, and is a better all-round performer than the Blade but it isn’t as attractive and is comparatively chunky, too.

One thing you definitively say about the new Razer Blade 15 (because the same held true of the old machine) is that it’s the most attractive gaming laptop you can buy. Although some rivals offer slightly slimmer, lighter cases, there isn’t a huge amount in it. The Blade weighs a mere 2.1kg and measures 19.9mm thick, which isn’t much more than the equally gorgeous (and more expensive) 16in MacBook Pro.

First up, connectivity. The Base model gets an extra USB-C port this year, bringing the total to two. The one on the right is a Thunderbolt 3 port and the one on the left is a USB 3.2 Gen 2 port (max 10Gbits/sec). On the Base model, neither can be used to charge the machine, which is a bummer if you’ve got it connected to your monitor via USB-C all day. That’s a feature (rather unnecessarily in my view) reserved for the Advanced model. 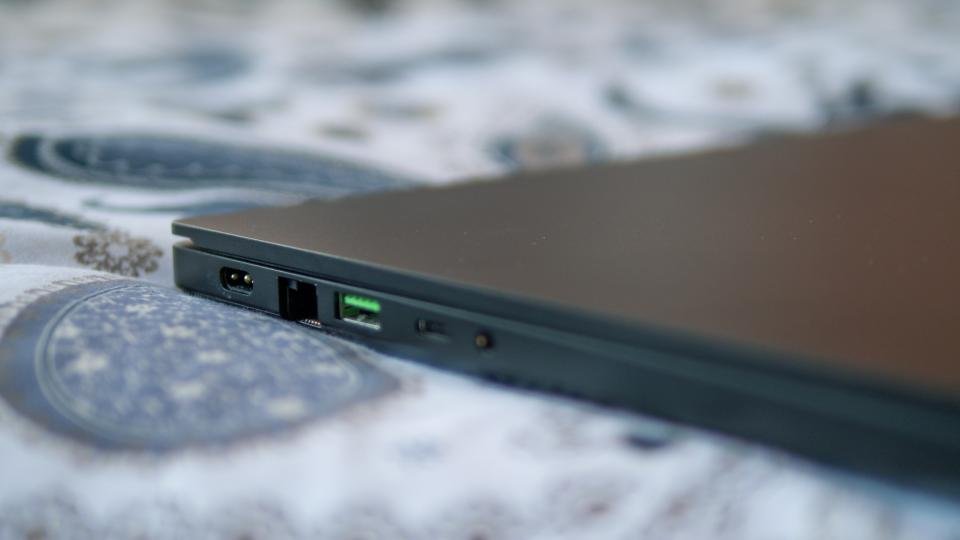 These USB ports are supplemented by three further USB A ports, all USB 3.2 Gen 1 (max 5Gbits/sec) – two on the right, one on the left – and a Gigabit Ethernet socket, which you don’t get on the Advanced model. I know, confusing, isn’t it? The 2020 Blade also loses the Mini DisplayPort this year but retains a full-sized HDMI output on the right edge.

There are also changes inside the machine, which can be opened up fairly easily by unscrewing ten tiny Torx T5 screws set around the edges of the bottom panel. Here, the Blade 2020 drops the 2.5in SSD bay from last year’s model, replacing it with a single empty full-length M.2 slot, while the Advanced model loses the free slot entirely. On the flipside, the Blade 15 (2020) Advanced has a better vapor-chamber cooling system than the Base model and a slightly larger battery. 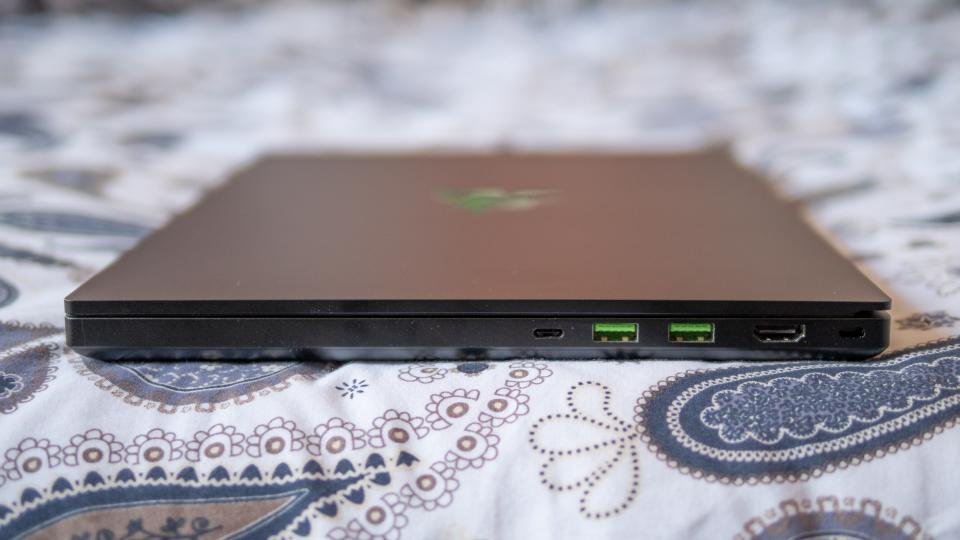 Elsewhere, it’s pretty standard stuff. Wireless connectivity is catered for by a 2×2 MIMO Intel AX201 WiFi6 adapter and Bluetooth 5. The webcam is a fairly uninspiring 720p jobbie that struggles with extremes of light and dark. The microphone is fairly good, however, and the speakers go pretty loud but aren’t particularly rich or full-bodied. Compared with the MacBook Pro’s webcam and audio setup, particularly the superlative studio microphone, the Razer lags a long way behind. There’s also no form of biometric login available on any Razer Blade 15, which feels a little backward.

The 144Hz 1080p display in the Base model is a pretty good one but it won’t blow you away with its image quality. It’s perfectly sharp at normal viewing distances and goes reasonably bright, too, up to a point.

A maximum of 377cd/m² is fine for indoor use and it’ll be viewable outdoors in a shady spot if you fancy doing a bit of work or gaming on your patio. Colour representation is absolutely fine with an sRGB gamut coverage of 87.1% (out of a total of 90.3% by volume), and there are no serious problems with colour accuracy in sRGB either, with the average Delta E hitting 1.94 (the lower the better).

It’s no MacBook Pro 16in display but neither does it offend in any particular way. And although it’s a touch less vibrant, it’s a lot brighter than the Gigabyte Aorus 15G’s 240Hz screen.

I’m not particularly outraged by the keyboard or touchpad, either. The former has a rather shallow key action but it’s reasonably comfortable and the layout is sensible – a lot more so than on the 2019 model, anyway. There’s no issue, as there was last year, with the right Fn key; it’s now been moved away from its problematic position in the far right corner to between the Alt and Ctrl keys, resulting in far fewer mis-presses.

As you’d expect, the keyboard has RGB backlighting, too. However, it’s worth noting that the Base model doesn’t have per-key customisability as the Advanced model does. You can turn the whole keyboard one colour or another, or have it pulse or cycle through the colours and react to on-screen content (as in the image below), but you can’t highlight the WASD keys in one colour and have the rest show another. 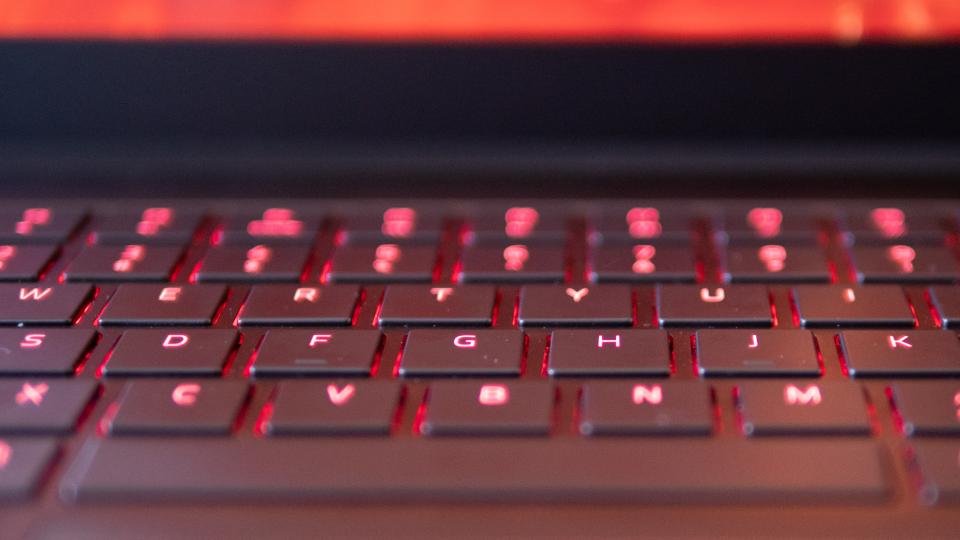 The touchpad is much better. In the modern style, it is absolutely enormous, measuring 130mm wide and filling the wrist rest almost completely top to bottom at 80mm in height. I’d imagine most gamers will still want to supplement it with a proper gaming mouse but if you’re out on the road and needing to get some work done quickly, it’s a joy to use.

And now to the meat of the matter. How does the Razer Blade 15 (2020) perform? With the very latest 10th gen Comet Lake Intel chips inside and Nvidia’s RTX graphics, the answer is, unsurprisingly, pretty darned well.

I’ve run the machine through a variety of benchmarks, from our own media-focused transcoding, image conversion and multitasking tests, through cross-platform CPU and graphics tests, to a range of real-world gaming benchmarks, and the Blade performed brilliantly across the board – although not any faster or slower than expected given the specification. 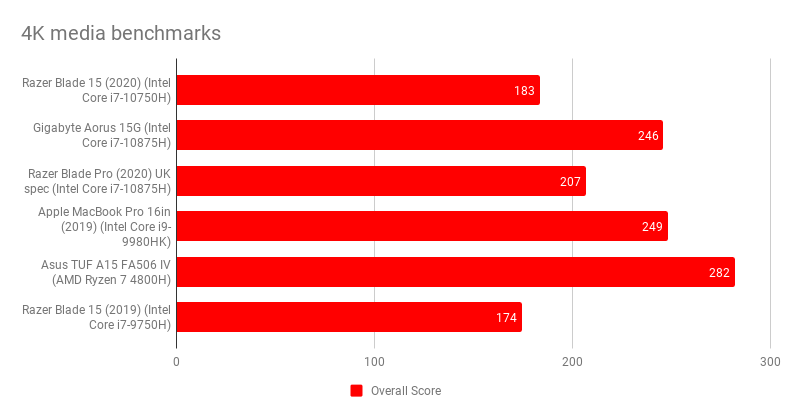 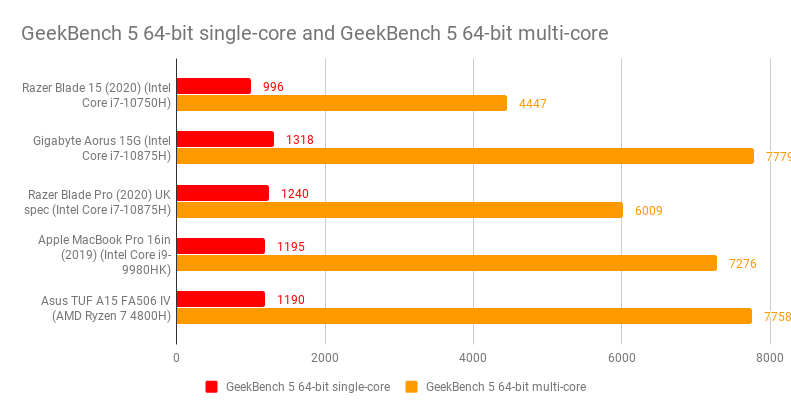 So, it’s a faster machine than last year’s model at CPU-bound tasks (it has a faster CPU) but a little slower at gaming and graphics-heavy tasks. That’s because the Razer Blade 15 we tested last year had an Nvidia RTX 2080 inside where this one has the slightly less capable RTX 2070.

That also makes this year’s Razer Blade 15 the slowest of the 10th-gen gaming laptops we’ve tested this year, by dint of having the lowest spec GPU. The Gigabyte Aorus we tested had an RTX 2070 Super inside, while the larger Razer Blade Pro 17 (2020) had an RTX 2080 Super.

The differences, however, are minimal and the Razer Blade 15 in this specification will play any game you care to throw at it in native resolution at smooth frame rates; even if you ramp up the detail levels, it should cope in many cases. 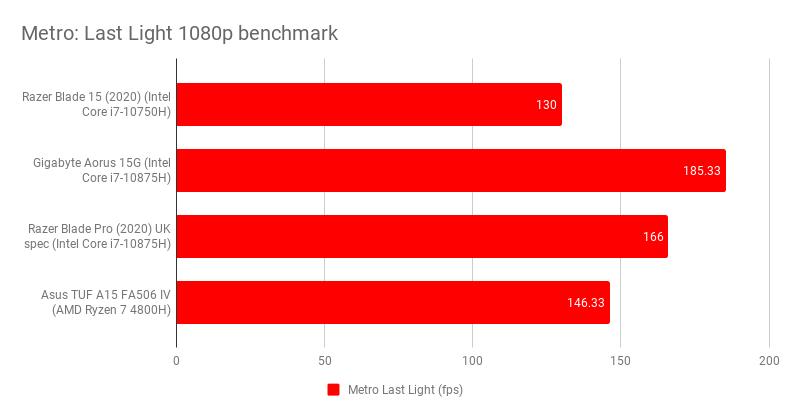 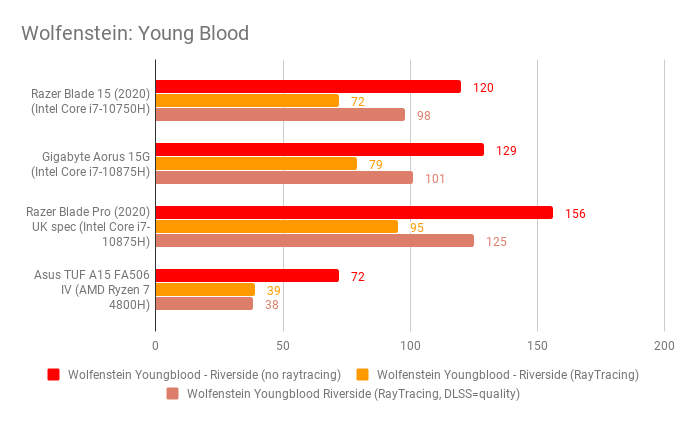 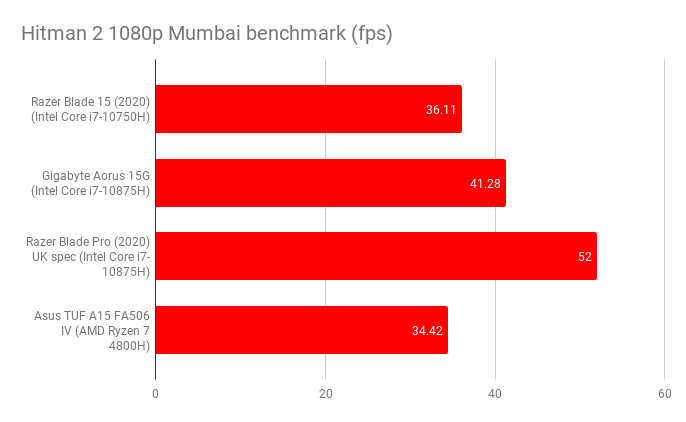 At extreme settings, the Hitman 2 benchmark returned a fairly sluggish result of 36fps but it only took knocking back super-sampling from 2 to 1 to bump that back up to a perfectly smooth 72fps. The fans stay pretty quiet most of the time, too, although you’ll be in no doubt when the CPU and GPU are working hard when the fans ramp up to maximum.

The Blade 15 (2020) has a quick SSD, too. It uses a 512GB Liteon NVMe M.2 SSD which is super fast for sequential reads although not quite so amazing for sequential writes, reaching speeds of 2,590MB/sec and 1,961MB/sec in AS SSD respectively. 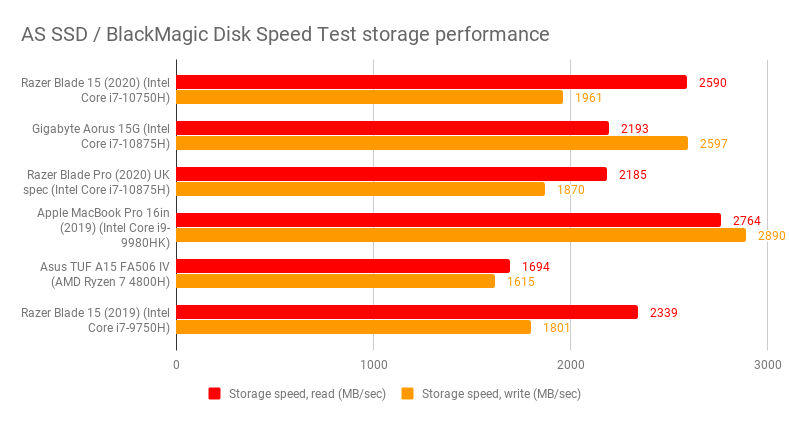 Where the Razer Blade 15 (2020) suffers, particularly the Base model, is its battery life. Under the hood, the Blade has a comparatively small 65Wh battery and this compares poorly with its rivals. The Gigabyte Aorus 15G has a 45% bigger battery at 94Wh and the MacBook Pro 16in’s is 54% bigger at 99.8Wh. And, guess what? The Razer’s battery life is pretty poor as a result.

Indeed, in our comparatively low demand video rundown test, the Blade 15 lasted only 4hrs 29mins, which is worse than both of those rivals, by nearly three hours in the case of the MacBook Pro and two in the case of the Gigabyte. 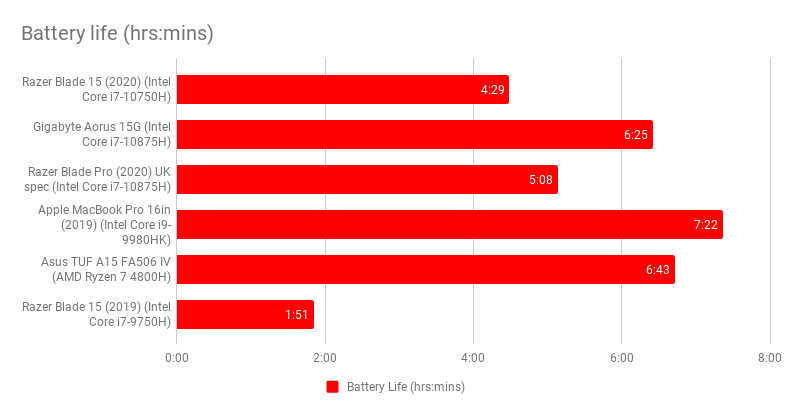 Whether or not this bothers you depends entirely on how much you see yourself using the machine when you’re out and about. If it’s mostly going to be plugged into the wall at home or in the office, then fine. But, make no mistake about it, this is far from the greatest laptop for working on the move; it might get you through half a day of work at the coffee shop before you have to go digging in your bag for the (fairly hefty) power adapter but little more than that.

The question is, should you buy one? The answer lies somewhere in the previous paragraph. There’s not getting around it: the limited battery life is a big disappointment, made even more so since the Blade is such an eminently portable machine.

It is, perhaps, not as go-anywhere light as the Dell XPS 15 or the MacBook Pro 16in but there isn’t a lot in it, especially if you choose the touchscreen XPS, which has a bigger 86Wh battery.

But then, if you’re not going to take it everywhere and use it on the move, what’s the point in having a laptop that combines power and portability so beautifully? Why not just opt for a fatter, uglier, cheaper machine instead? I can’t think of any particular reason other than vanity.

This is a shame because the Razer Blade 15 is, in most other respects, a very good laptop. It’s achingly gorgeous, as quick as a modern gaming laptop needs to be and very slim and light for a laptop with this much grunt. What’s more, it’s even reasonably good value. If battery life had been even a couple of hours better than this (there’s room in the chassis) I’d be minded to be a lot more positive. As it is, I’m somewhat non-committal. 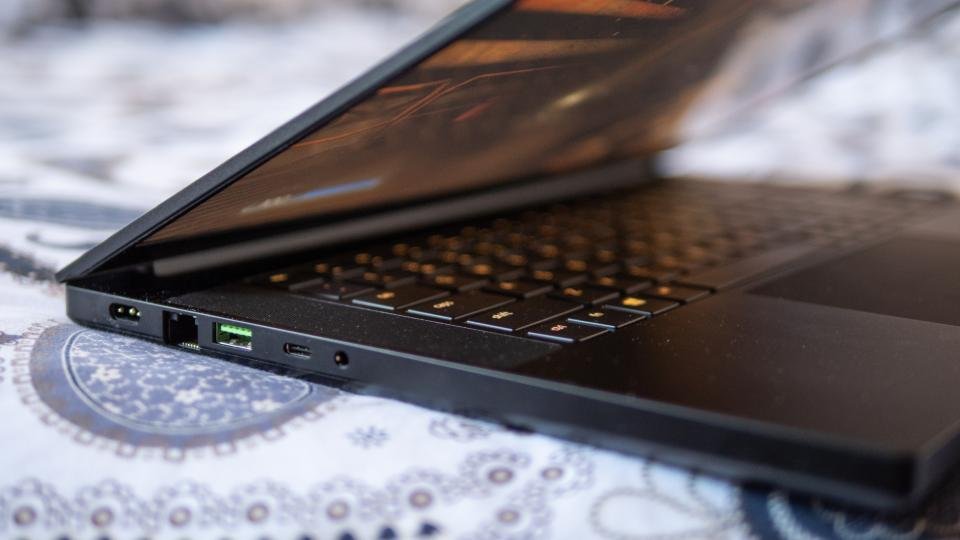