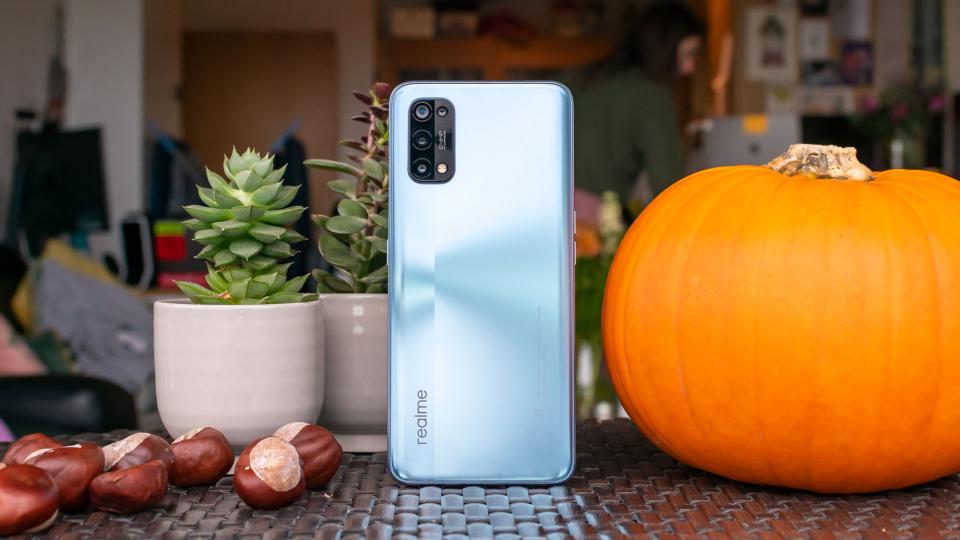 The Realme 7 Pro is excellent, but is squeezed hard by competition in the mid-range space

I recently reviewed the Realme 7, a handset that was brilliant in every way, except the one beyond its control: a rival handset, just £20 more expensive, was a touch better by every measurable metric.
Fortunately, the Realme 7 Pro is ready to step in. But at £100 more expensive, is it worth the extra outlay? And is there another handset in the ~£300 bracket ready to steal its thunder in a similar way?

Realme 7 Pro review: What you need to know

While the Realme 7 used a MediaTek chipset, the 7 Pro goes the tried and tested Qualcomm route. Here, the 2.3GHz octa-core Qualcomm Snapdragon 720G powers things, backed by 8GB of RAM and 128GB of onboard storage.
As is the fashion nowadays, you don’t just get one rear-facing camera: you get four. A main 64MPl snapper is backed up by an 8MP wide-angle lens and a pair of 2MP sensors for depth and macro photography.

Despite the bright goldy yellow boxes of both handsets looking virtually indistinguishable, the two phones have surprisingly little in common with each other. In broad terms, the Pro is better as you might expect, but it’s not superior in every way. The regular Realme 7 has a 90Hz refresh rate on the screen, for example, while the Pro has your bog-standard 60Hz panel. For another, the 5,000mAh battery is 500mAh larger than the Pro model. 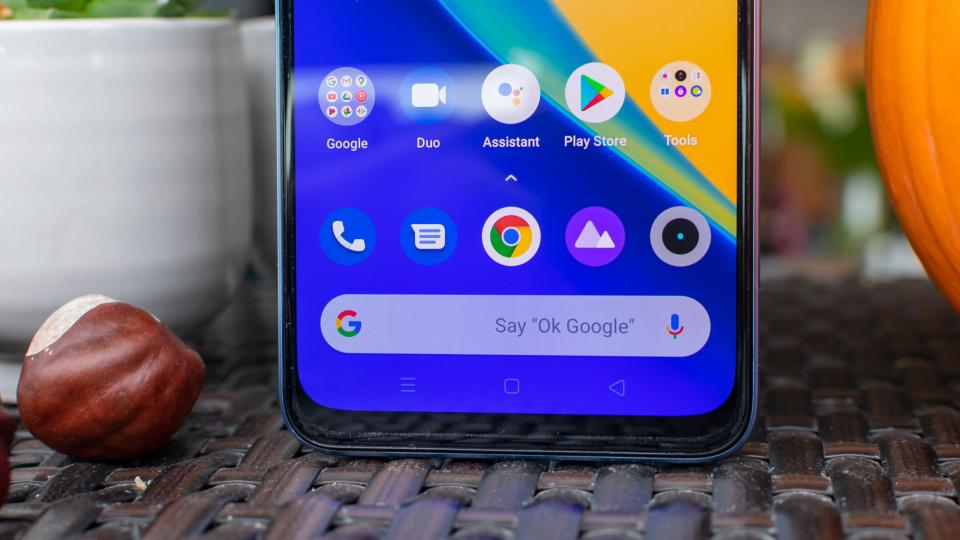 In every other way, though, things are as expected. The Realme 7 Pro has a faster Snapdragon 720G processor, 2GB more RAM and twice the storage (of the base model). The screen is slightly smaller (6.4in vs 6.5in), but it is Super AMOLED rather than LCD, and it contains an in-panel fingerprint sensor, too.

While both handsets have quad-camera setups with 8MP ultra-wide lenses, 2MP portrait sensors and a 2MP macro snapper, the main camera is different, with a 48MP Samsung S5KGM1ST in the regular phone and a 64MP Sony IMX682 in the Pro.

In short, you do get more by paying £279 for the Pro, but the regular handset is excellent value for £100 less.

The Realme 7 Pro confuses the distinction a little further by looking almost exactly like the cheaper model. That’s no bad thing, by the way – the Realme 7 looks a lot like the iPhone X at a glance: a handset that sold for £999 just three short years ago. But on a practical level, you won’t get a very different-looking phone by skipping the Pro version. 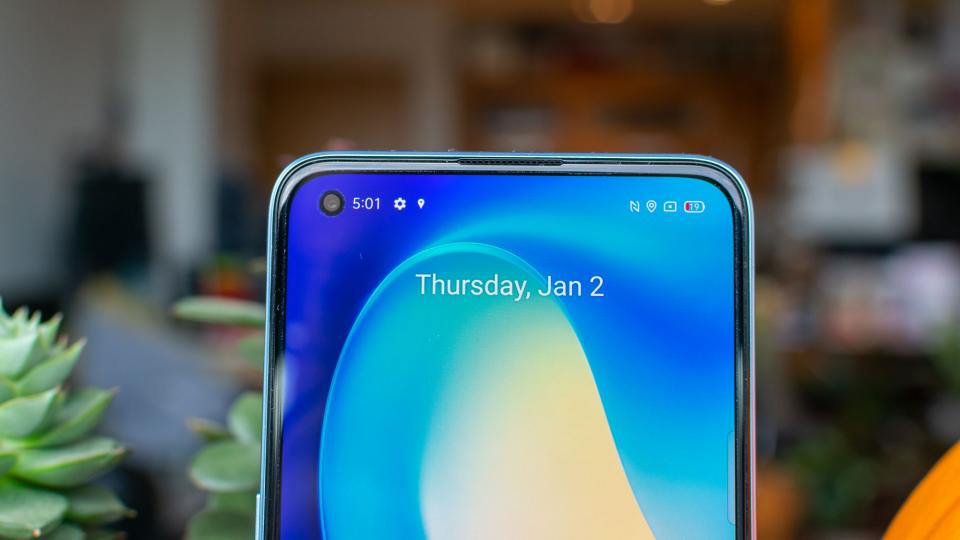 Still, the extra money does get you one cool party trick. While the Realme 7 has a fingerprint scanner embedded into the power button, the Pro model lets you prove your identity by pressing your thumb onto the screen. It’s hardly new technology now, first debuting on Vivo’s X20 Plus in 2018, but to my knowledge this is the cheapest phone I’ve seen take advantage, and it seems to work quickly and efficiently, so that’s a win in my book.

Otherwise, the similarities continue. The back is plastic but feels nice in the hand, and the two-tone vertical design is eye catching too. The camera hump is a bit distracting, with four lenses arranged in a strange inverted ‘L’ formation, but if Google, Apple and Samsung can get away with unsightly camera humps, then it would be a bit mean to pull Realme up on it. It does mean that the phone wobbles a bit when placed down on a table, but it’s ultimately a minor inconvenience.

Otherwise, it’s all pluses and lots of them. There’s a 3.5mm headphone jack at the bottom, right next to the USB-C charging port. Plus, the phone supports microSD card expansion and dual SIMs without making you pick and choose between the two.

The Realme 7 Pro’s 6.4in touchscreen boasts a resolution of 2,400 x 1,080 for a pixel density of around 411ppi. It’s a Super AMOLED number, which means you’re getting perfect contrast and nice, deep blacks. True, it ‘only’ supports refresh rates of 60Hz, but the same applies to most phones on the market, and it’s more of a ‘nice to have’ than an essential feature, given the vast majority of apps are locked to 60fps anyway. 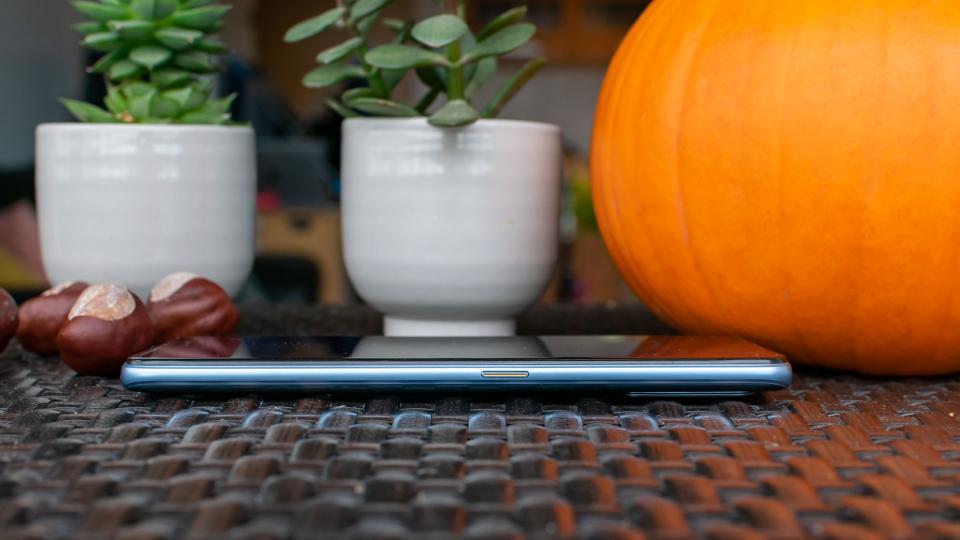 So, how does it function as a screen? Very well, in fact, once you turn off the lurid default mode (sRGB gamut volume: 145%) and switch it to “Gentle”. Our colorimeter measured 99% sRGB coverage with a gamut volume of 100.3% in this mode, and because it’s AMOLED, contrast is perfect. At a peak of 432cd/m2, it’s not the brightest screen we’ve ever seen, but it will be more than enough for all but the brightest days.

Despite the lack of 90Hz found in the cheaper Realme 7, in every other respect it’s a vastly superior panel, and up there with the best of them in this price range.

The Realme 7 Pro uses Qualcomm’s Snapdragon 720G, which is a chip we haven’t actually tested before (it’s mostly in localised versions of Xiaomi, Vivo and Oppo handsets, by the looks of things.) That chip is backed up by 8GB of RAM and 128GB of onboard storage. So, how does it perform?

About par for the ~£300 course, really. As you can see from the graph above, it betters the Samsung Galaxy A51’s Exynos 9611 performance, and is about level with the Moto G 5G Plus and Pixel 4a, which both go for slightly more. The only fly in the ointment is the relatively strong performance of the regular Realme 7, where the power of the MediaTek G95 was a real surprise package.

Fortunately, the Realme 7 Pro proves its superiority when it comes to graphical performance, getting a roughly 25% boost over the cheaper version in offscreen tests. It’s significantly better than the Samsung Galaxy A51, a bit better than the Pixel 4a and basically in a dead heat with the Motorola Moto G 5G Plus. In short, it’s punching above its weight, but not as significantly as the Realme 7 does.

Fortunately, the Realme 7 Pro has another trick up its sleeve: battery life. Despite having a 500mAh smaller cell, compared to the non-Pro version, it manages to have pretty similar stamina. The 4,500mAh battery kept the Realme 7 Pro ticking along for 18hrs 10mins in our looped video test. While that’s a nose behind its rivals, in real-world use you’re unlikely to tell the difference: the point is that this is a handset that’ll comfortably manage the time between charges.

Better still, it ships with Realme’s 65W SuperDart charger which promises 42% of your battery back in just ten minutes, and a full cell in 34 minutes. Combine this with its naturally long life, and you can be pretty satisfied that this is a phone for people who worry about where their next charge is coming from.

Like the regular Realme 7, the Realme 7 Pro comes with a quad-camera array, and three of them are the same. There’s an 8MP f/2.3 ultra-wide lens and two 2MP f/2.4 sensors: one for macro and one for depth.
The difference lies in the main camera. While the regular Realme 7 uses a 48MP Samsung sensor, the Realme 7 Pro has a 64MP Sony IMX682 instead – though both share an f/1.8 aperture.
So how does it do? In brighter conditions, the answer is “very well”. Pictures are crisp with plenty of detail and nice, natural-looking colours. 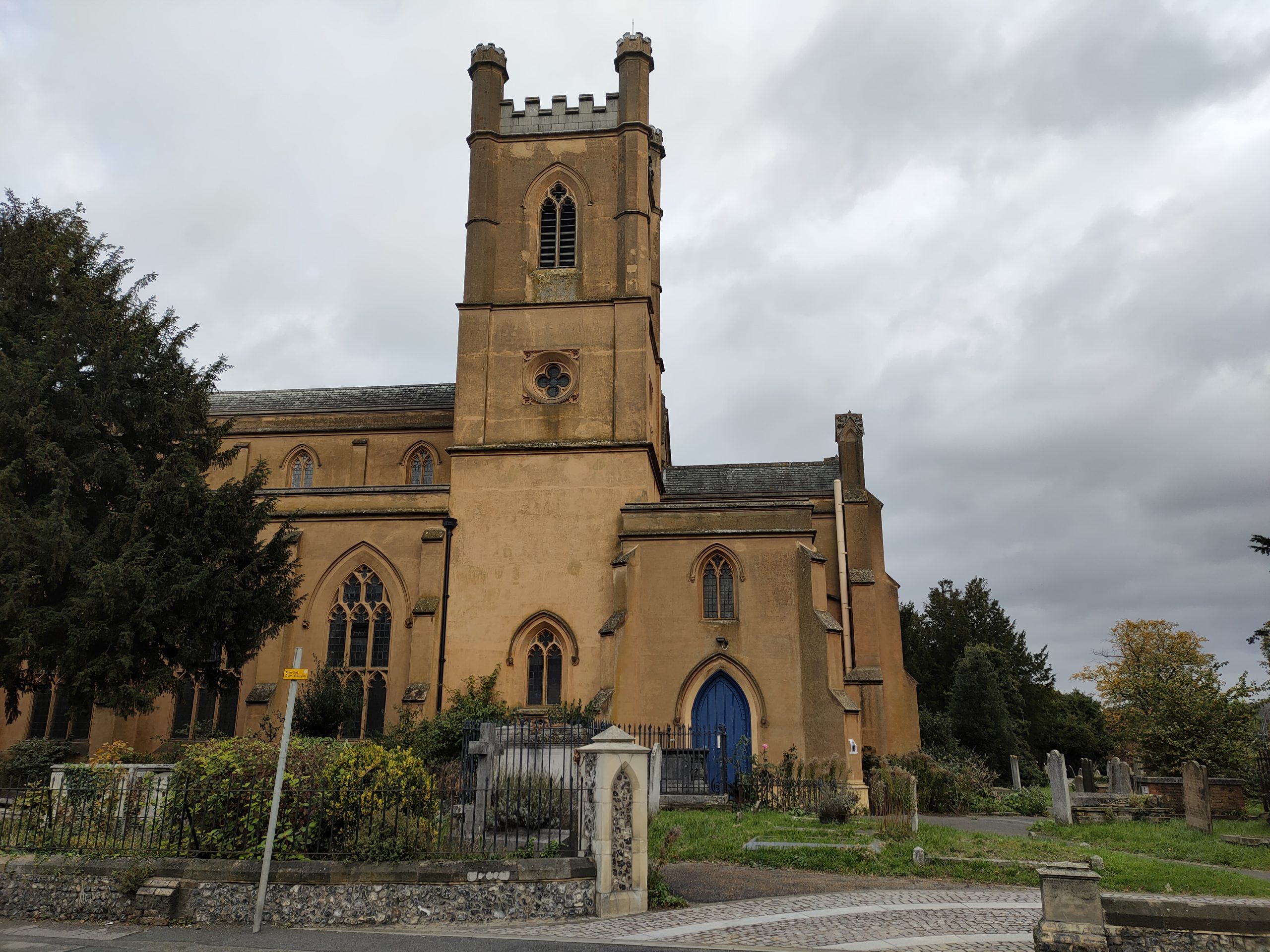 But crucially, there’s not a great deal of difference between the Pro and non-Pro model, as you can see from the zoomed comparison picture. Both handle it pretty well, even when magnified to this degree, and it’s essentially a dead heat: the Realme 7 has better lighting on the window, but the Pro model pulls ahead with extra detail on the tilework.

The proof in the pudding is low-light photography, which is tricky for even the most expensive smartphones, let alone two that go for under £300 apiece. 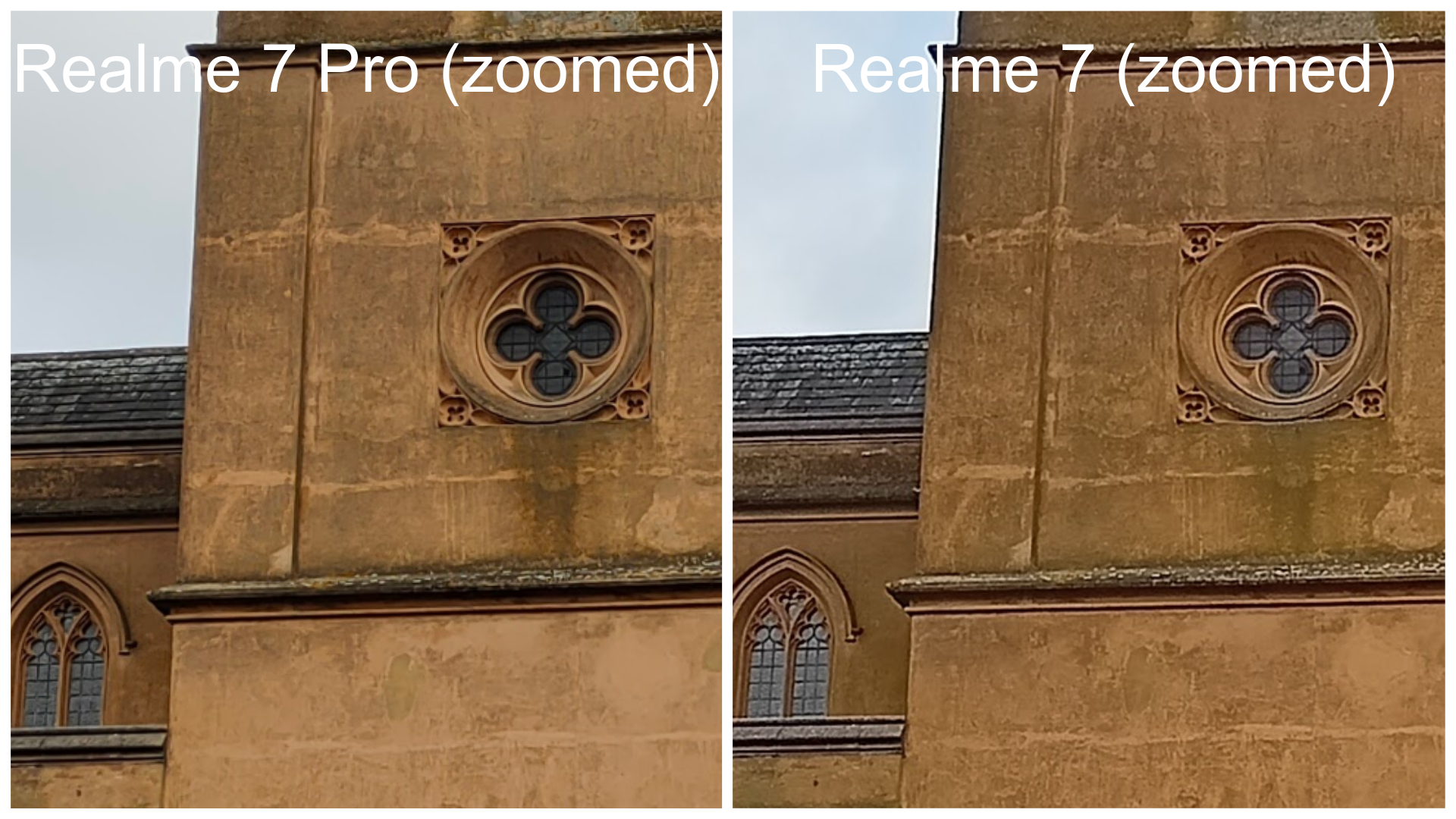 I took both phones out into the garden at dusk to see how they would cope in conditions that wouldn’t call on the full might of the ‘night mode’ but would still prove more challenging than regular snaps. 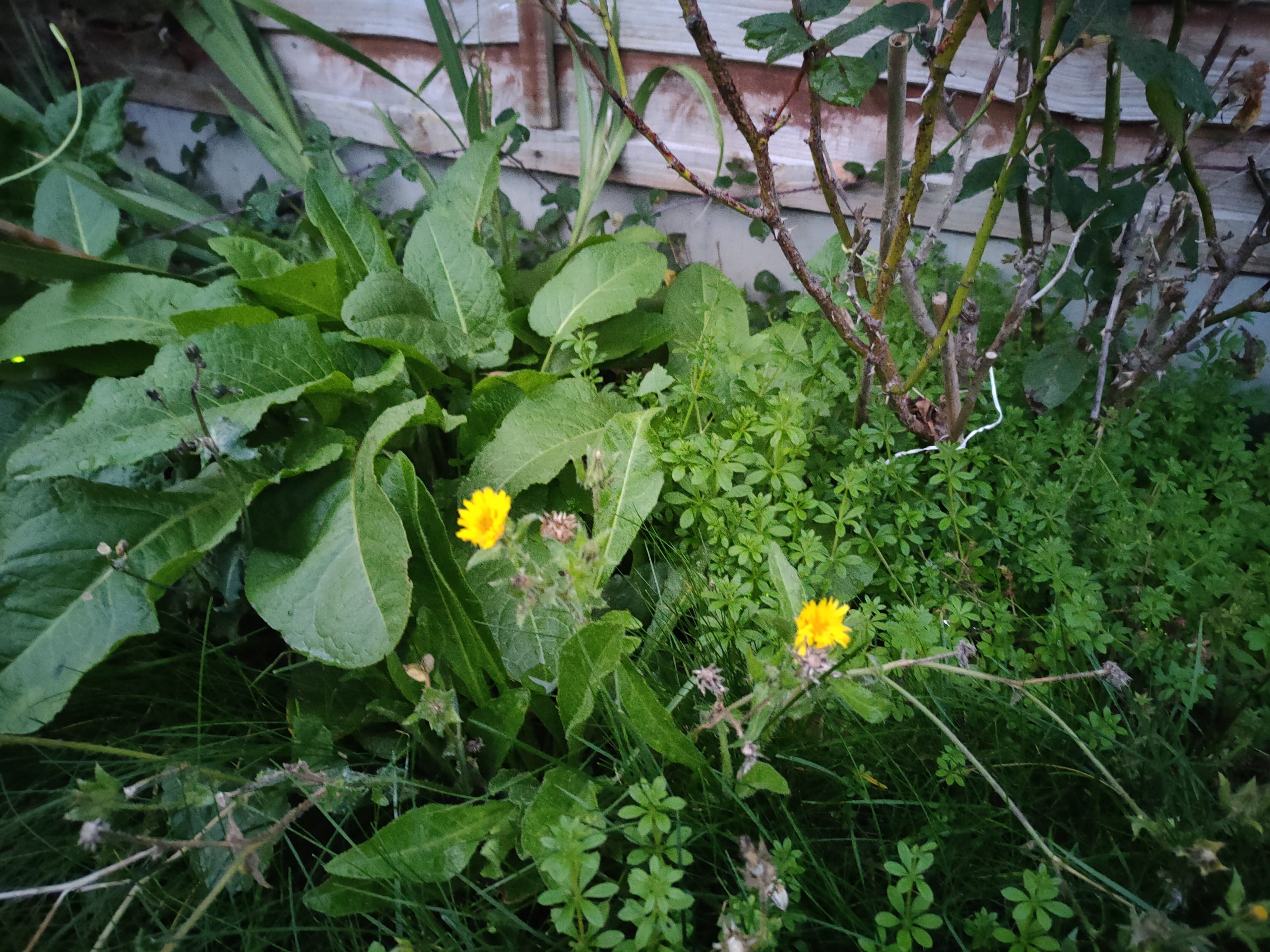 Here, if you’ll excuse the pun, it’s night and day. The Realme 7 Pro captures a lot more detail on the individual leaves, while the regular Realme 7 produces more visual noise and the branches at the back just disappear into a smeary blur. 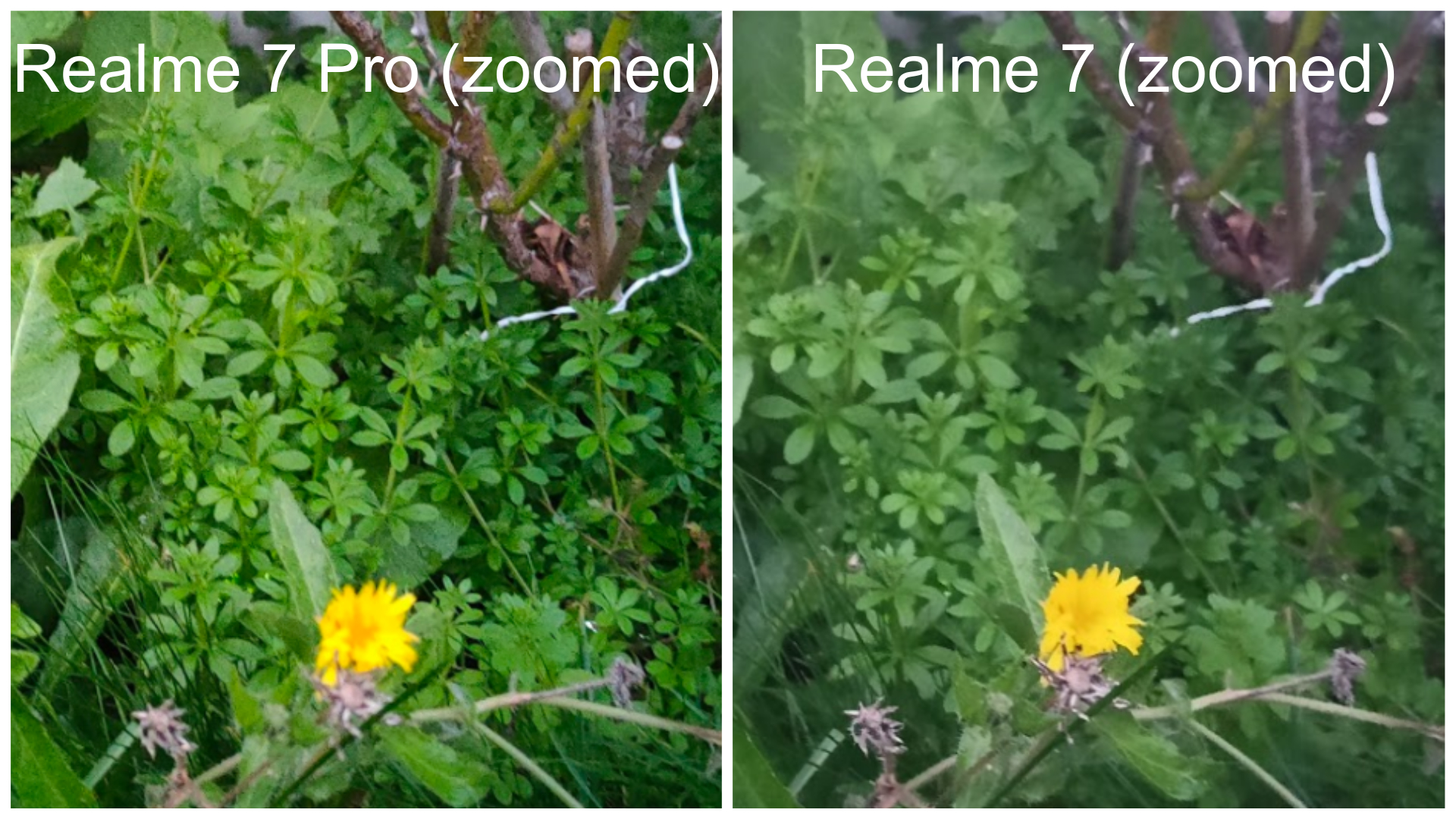 I don’t want to overstate it: both are perfectly adequate for the price bracket, but it’s not like the Realme 7 Pro will be giving Apple sleepless nights over the new iPhone 12. For those who value photography – especially the low-light variety – then spending the extra £100 looks worthwhile.

As for the other lenses, they’re fine, but likely rarely to be used. I found the macro lens a lot fussier at locking on than the regular Realme 7, and I personally still think depth sensors are a bit pointless. Unless companies are adding a telephoto lens, I’d rather they just do one camera really well, instead of throwing in additional ones for the sake of it. 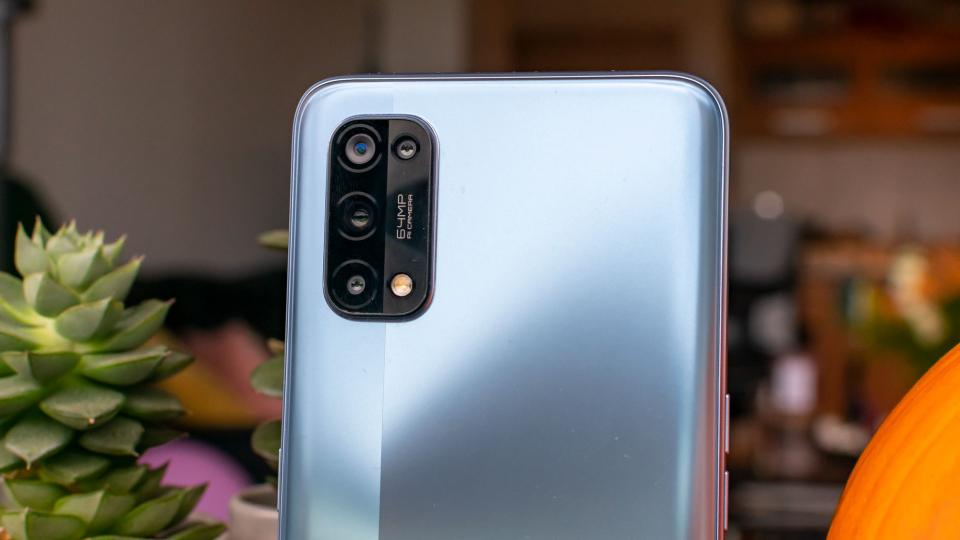 One lens that it would be madness for any company to abandon, though, is the front-facing selfie camera. Here, you also get an upgrade on the Realme 7 with the 16MP f/2.1 lens replaced by a 32MP f/2.5 snapper. To be honest, it doesn’t make a great deal of difference: both are fine for selfies and video calls, but you’ll still want the rear cameras in most circumstances.

Where the Realme 7 Pro clearly pulls away from the regular Realme 7 is in video. While the settings are the same (720/1080p at 30- or 60fps; 4K at 30fps only), the performance is markedly better on the Pro. There’s no setting for stablisation, but upping to 60fps made the Realme 7 footage extremely bouncy, while the 7 Pro’s is a lot more stable in both 30 and 60fps. On top of that, it also seems to react a bit better to sudden changes in lighting, too.

All of this leaves the Realme 7 Pro in a somewhat tricky position. In terms of design, performance and battery life, you’re really not losing much by saving £100 and buying the regular Realme 7. But, as I wrote in that review, the Xiaomi Poco X3 NFC is better in every way for £20 more, so that’s out.

Fortunately, the Realme 7 Pro is an improvement in two significant ways: both the screen and camera are markedly better than the regular Realme 7. The trouble is that the Realme 7 Pro has its own rival for £20 more: the Motorola Moto G 5G Plus. It’s awkwardly named, but at £300 it gives a longer battery and, as the name suggests, 5G connectivity.

The Realme 7 Pro is a fine phone at a fine price, but the competition is fierce. And as good as it is, for my money, the Moto is a better buy.