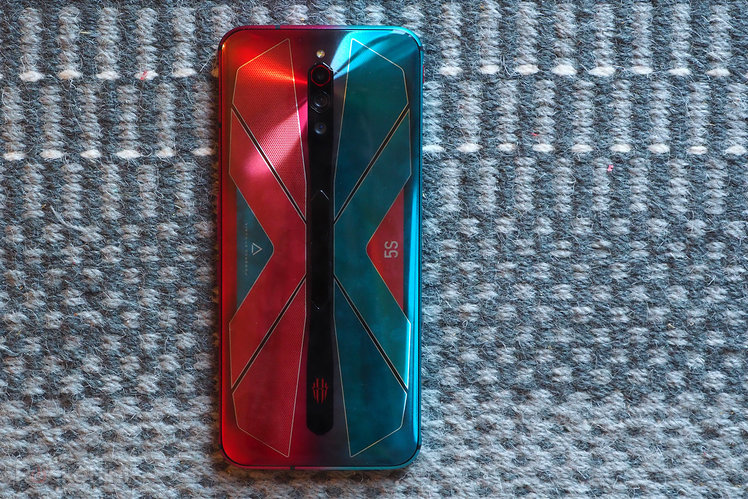 The Red Magic 5S wears its heart on its sleeve. There’s no doubt that this is a gaming phone through and through, what with its jazzy blue and turquoise – also known as ‘Pulse’ – colourway, 144Hz refresh rate screen, fan vent openings to the side and a built-in cooling fan (that makes a bit of a whistling sound).

It’s not a dramatically different device to the RedMagic 5G – which we reviewed earlier in 2020 – so does Nubia’s updated gaming special hit all the right notes this time around?

The RedMagic 5S is a fairly chunky beast, at almost 10mm, but that’s on account of its fan cooling system and big screen size. It’s a little bit of a struggle to reach across the virtual keyboard one-handed, but who realy cares? This phone is all about focusing on two-handed gaming fun. 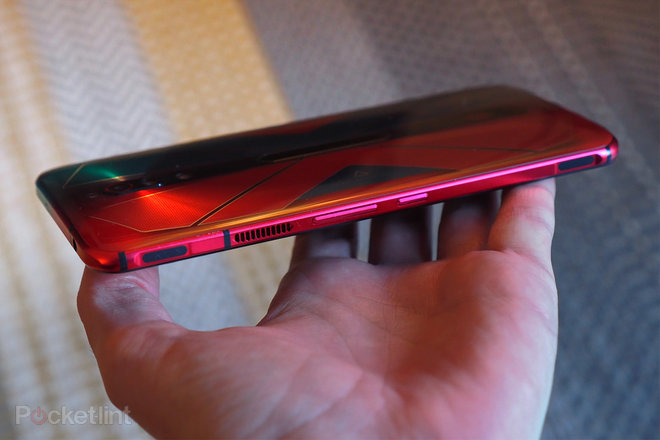 That’s why you’ll see two flat areas to one side: these are the 320Hz built-in shoulder trigger buttons. It’s a subtle implementation too as, in normal use you won’t notice these triggers – which don’t physically move, they’re only based on forced press contact – proving that the Red Magic can morph between everyday device and gaming mecca.

The 5S model tones down the lighting effects that were abundant in the 5G model too. Given how loud the Pulse colour finish is we don’t think that’s a bad thing. Less flashy lighting also means battery life improvement potential.

While we see that as a positive change, the 5S hasn’t taken the opportunity to change quite enough compared to the 5G model. The in-screen fingerprint scanner, for example, is still well behind the current standard – so it can be a pain to use given the fail rate. 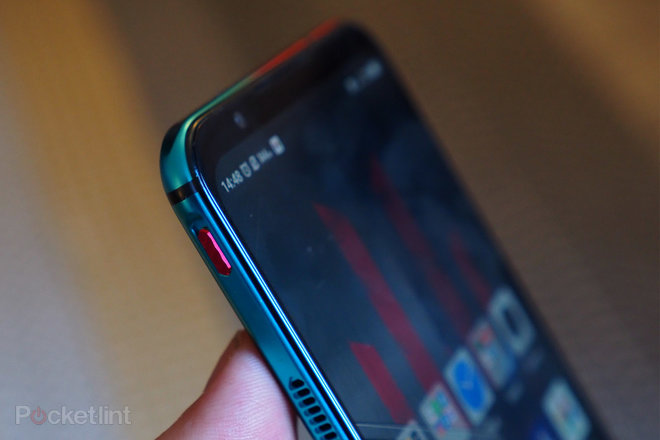 The handling of gaming remains rather eloquent: there’s a dedicated Game Space physical switch to the top edge of the phone. Simply flick this and you’ll be taken to Game Space – where you can customise notifications, fan control, arrange your games, switch on Do Not Disturb, and such like.

A big aspect of the Red Magic 5S’ appeal is its 144Hz refresh rate screen. You’ll rarely see such high refresh rate panels on the market – there’s the Lenovo Legion gaming phone, as one example, or Xiaomi is now dabbling with the technology in its non-gaming line-up, led by the Mi 10T Pro. 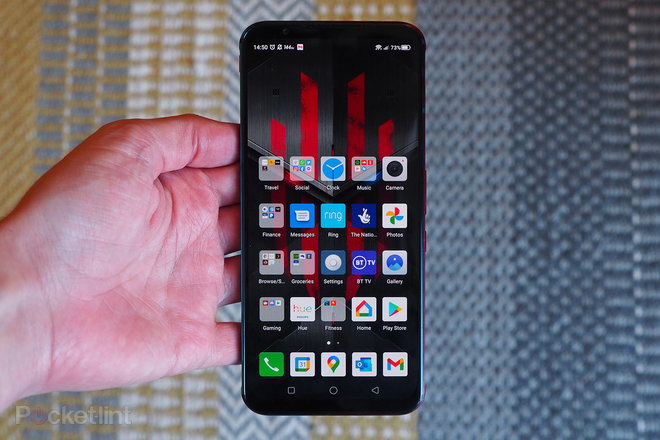 Typically phones have a 60Hz refresh rate, i.e. that’s how many times per second they cycle through a screen. A number of devices up that to 90Hz – which is a 50 per cent boost. Others are pushing to 120Hz – doubling the typical refresh rate. So 144Hz is a one-up over that, in technical terms.

But just as we said of the 5G model: the principle of all this makes theoretical sense, because “more equals better”, but in real-world terms there’s only so much difference that your brain can decipher. For us, therefore, we fail to see a big jump from 60Hz to 90Hz or 90Hz to 120Hz. Put a 144Hz panel next to a 60Hz panel and scroll through some text, however, and the difference is clear. So there’s certainly some benefit to perceived smoothness.

But part of the argument for high refresh is the response time. Here the screen has a 240Hz touch sampling rate, meaning your touch will be picked up in just 2-milliseconds. Assuming the software is then channeling that data and pushing it to a game server as rapidly as possible – here aided by Wi-Fi 6 and 5G connectivity potential – then that could, again theoretically, have a benefit. But, realistically, we don’t think most people will notice. 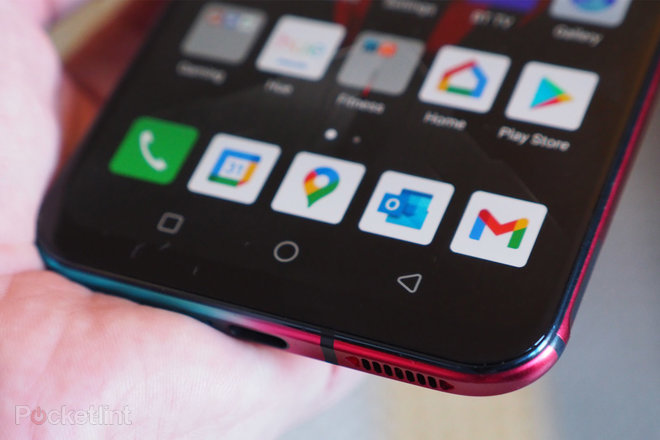 All said, the Red Magic 5S has a decent screen. There’s no notch to get in the way. The resolution (FHD+) is ample – although we’re surprised it doesn’t have yet more pixels for the highest fidelity (typically, however, such high refresh rates aren’t compatible). Brightness and colours look decent too. And 144Hz is a nice to have.

The 5S doesn’t up its chipset game over the 5G model. The Qualcomm Snapdragon 865 at its heart is mega powerful, but there arguably an opportunity to use the Plus variant. So here the loadout is familiar, with 8GB LPDDR5 RAM (there is a 12GB variant). The on-board storage is UFS 3.1, though, for fastest access. 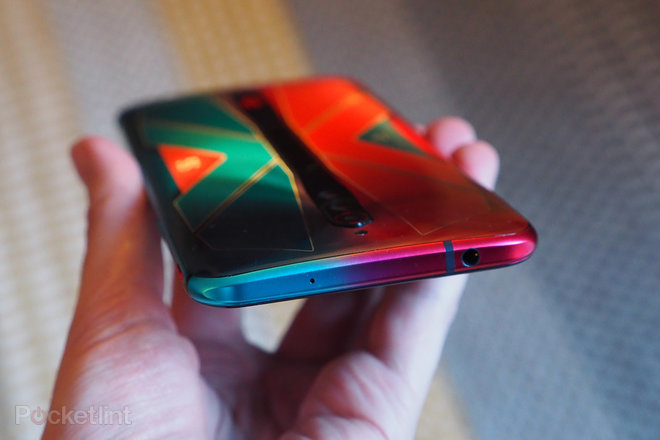 The RedMagic 5S doesn’t really doesn’t cut any corners when it comes to gaming. The fan and liquid cooling pipe system can be a little noisy, but it enables faster charging without overheating and more powerful gaming for longer. Can’t say you’ll get that in many other phones. But it is part of the reason the 5S is rather thick in build terms.

This design blueprint does make for a phone that can handle that bit more than your average. However, a bit like the screen’s one-upping in the refresh rate department, whether you’ll ever really need this much power is up for question. The Xiaomi Mi 10T Pro is much the same, minus the fan and jazzy colours.

In terms of battery the 4,500mAh cell in this phone is large and the 55W fast-charging is super quick (aided by the fan if you want, although this can be disabled). Even with 144Hz turned on all day long, including GPS tracking for hours and some gaming sessions, we’ve still been getting to the end of a long day with around 20 per cent remaining. Go hard on the gaming, though, and the battery will be drained all the quicker.

Overall, then, the Red Magic 5S offers almost exactly what the 5G did (albeit with UFS 3.1): plenty of power, speedy connectivity, cooling that aids battery life. All for a fair asking price.

While a lot of phones are going camera crazy of late, chucking all manner of lenses onto the rear, the Red Magic 5S keeps things a little more simple. Indeed, it’s identical to the 5G model.

What you get is a 64-megapixel main unit, utilising the Sony IMX686 sensor, which has been used successfully in other top-tier devices. In this instance, however, it’s the processing that lets things down a little. Sure, there’s the resolution to deliver detail (at 16MP, a result of using four-in-one oversampling), but the default contrast is far too high and the optics see things soften towards the edges – which is where detail diminishes.

What we’d really liked to have seen, however, is proper use from the other optics. The wide-angle is inaccessible and the depth sensor seems to do little to nothing. But this is a gaming phone, not a camera phone, so perhaps the camera solution being a long way from fully realised is of little concern here.