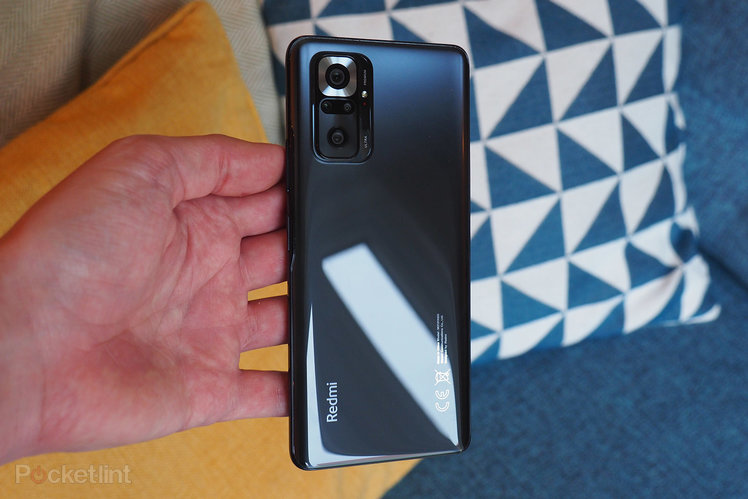 Redmi is fast becoming a key disruptor in the affordable phones market. The company’s Note 10 Pro, as reviewed here, makes it clear to see why: it’s dripping with specification that puts it a cut above its nearest of competition.

The brand name might not be instantly recognisable to all – Redmi is an offshoot of Xiaomi, hence no surprise the Note 10 Pro is like a watered-down Xiaomi Mi 11 in many respects – but when affordability is your main goal, and it simply functions as well as this, that’s not going to be a major barrier.

So if you’re seeking a phone that costs under a few hundred, is the Redmi Note 10 Pro appealing enough to knock the likes of the cheaper Motorola G30 out of contention?

Upon pulling the Redmi Note 10 Pro from its box – here in “Onyx Gray”, which has a soft, almost blue hue about it – it’s comes across as a pretty good-looking slab of glass and plastic. There’s Gorilla Glass 5 to protect the front, and not a mass of bezel cutting into the screen either. 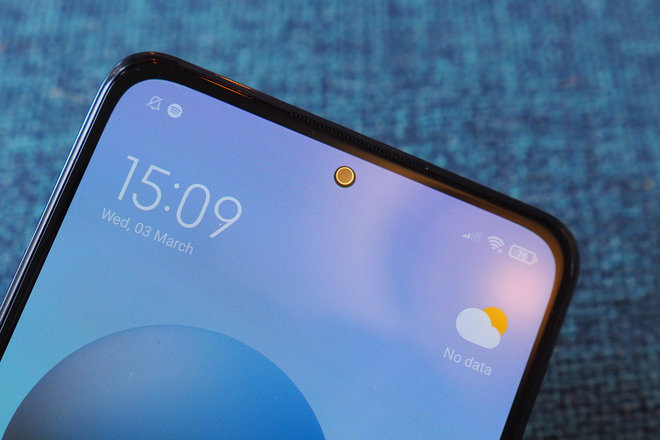 What is cutting into that screen more prominently than most is the punch-hole camera. It’s not even the scale of it – it’s a smaller diameter than you’ll find on recent Motorola handsets, for example – but because it’s got a silvery, shiny ring that can catch light and is a bit distracting. We’d rather it was pushed to the left side, more out of sight, and darkened please.

The Note 10 Pro’s rear is plastic, but not in a budget-looking way. It catches fingerprints in a similar fashion to glass, but it’s easy enough to wipe clean. And Redmi has chosen some pretty classy colour options too – none of the “Pastel Sky” (read: pink and mud-green) nonsense that Motorola opted for with the G30.

The only bother of the Redmi’s rear is that protruding camera bump. Not only is it large, it’s off-centre and, therefore, the phone wobbles about all over the place when laid upon a desk. Not that the main goal of a phone is to use it flat on a desk – you’ll normally have it in the hand, obviously – but it’s still a bugbear. A different camera enclosure would have negated this little aspect of the design.

The Note 10 Pro’s side-mounted fingerprint scanner is very neatly integrated, though, and we’ve found it to function very rapidly for logins. There’s also face unlock by using that front-facing camera, should you prefer. Oh, and if you’re still part of the wired headphones gang then the 3.5mm jack will prove a point of appreciation for you too. 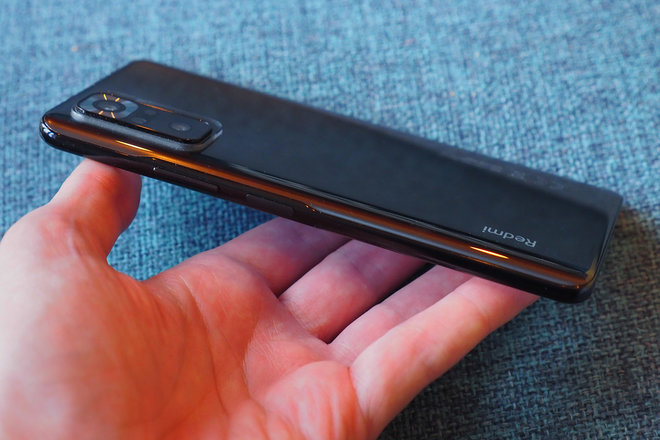 And so to the screen. This is one aspect of the phone that really helps to sell it for a number of reasons. First, it’s large, at 6.67-inches on the diagonal. But, more important than that, it’s got a Full HD+ resolution that puts it a step beyond many of its near competitors. Motorola, for example, has dropped to just HD+ in its lower-end Moto G family (so around 50 per cent fewer pixels).

The Note 10 Pro’s screen is AMOLED based, too, meaning it can have an always-on display activated – which illuminates the edges in a subtle fashion when there’s a notification, as one example – for visuals to be available without actively needing to turn the display on.

That screen tech also means deep blacks, while colour is rich. As the software allows a brightness selection for night use we’ve not found the auto-brightness to be of any bother here either – which is refreshing, as it’s been a pain in basically every other Xiaomi MIUI software-based handset of recent times.

The other big feature of this screen is that it offers a 120Hz refresh rate. The theory here is that it can run at double the rate – 120 refreshes per second – compared to a standard screen to give a smoother visual experience. That can often be the case, too, just not in every single aspect of use. 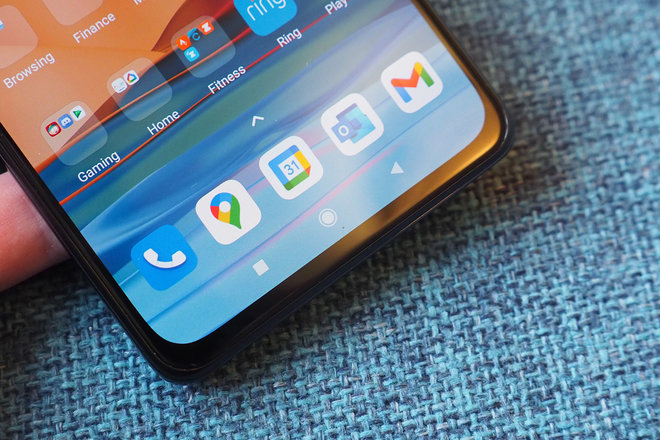 That’s the oddity of higher refresh rates: if you don’t have the hardware-software combination to handle it, then it’ll come a cropper. Thankfully it’s not too bad here, but there are some moments where the ultra-smooth swiping in, say, the Photos app gets stuttery when moving over to a different app.

Faster refresh is one of those nice-to-haves, sure, but 120Hz it’s not on by default – and even when you do go to activate it, MIUI describes it as a “medium” level refresh. It’s “low” for 60Hz, apparently, despite that being perfectly fine. And, um, there is no “high” – so the scale doesn’t make huge amount of sense. But it’s all a distraction really, from what’s an otherwise very decent screen.

Even with the 120Hz refresh rate activated, the Redmi Pro doesn’t suffer from limited battery life. We’ve been using the phone weeks as our own daily driver for weeks – and in that time there’s consistently been around 50 per cent battery remaining by bedtime. That’s 16 hours of use, so it’s on the cusp of being a two-day device. 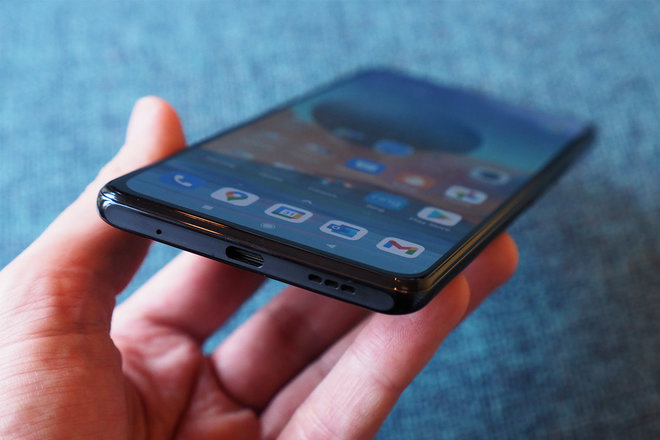 The battery capacity is large, which is part of the reason for this longevity, but there’s also the instance of the processor and software combination. With Qualcomm’s Snapdragon 732G platform under the hood, Redmi hits that sweetspot of reasonable performance, which limits overheating, and there’s no 5G possibility to grind it down either.

As chipsets go, the SD732 is capable of handling multiple apps, including games without particular graphical insufficiencies, meaning whether you want to run Zwift on your phone, dabble in a bit of PUBG Mobile, or hit some South Park: Phone Destroyer, it’s all within the Redmi Note 10’s reach.

The only slight stutters – and we mean very slight – tend to appear when jumping between apps, as we’ve previously outlined. That’s when you can visually see a lowering of the frame-rate, hence the question over whether 120Hz is actually all that important here. 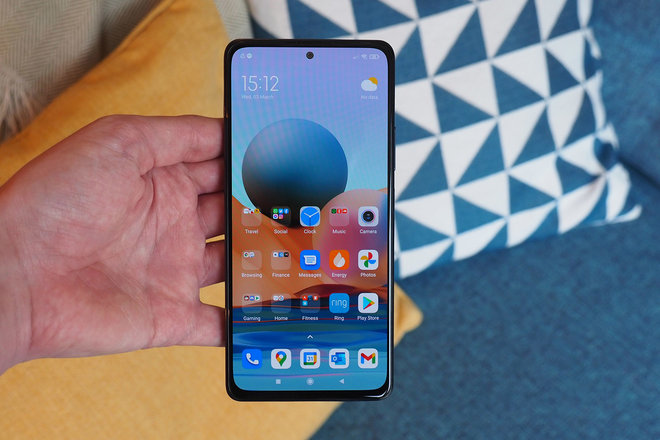 Running everything is Xiaomi’s MIUI 12 software, skinned over the top of Google’s Android 11 operating system. We’ve had very mixed experiences with this software in the recent past – with the Xiaomi Mi 11 it was limiting, in the Poco M3 it was irksome – but, favourably, in the Redmi Note 10 it’s caused us no significant issues. We’ve previously criticised Xiaomi’s software for being wildly inconsistent between devices (sometimes even on the same software version), but at least the Redmi gets the upper hand here.

That said, MIUI 12 does need some ‘training’, if you like. By default it battery-limits every app, which means you’ll need to dig into individual settings to rectify and ensure there’s no issue with what an app can do and when, or how much power it can or can’t use in the background. However, even with the default option selected we’ve not had notification delays like we did have with the Xiaomi Mi 11. So there’s greater stability here.

In the past there’s been criticism for targeted ads in Xiaomi software, too, but that’s not been a major bother in this Redmi setup either (at first we had no ads, an update did see them arrive in the base of some curated folders though). Yes, there’s still a separate Xiaomi store in addition to Google Play – which sometimes means apps will update from one, some from the other – but it’s enough in the background and out of the way that you basically needn’t worry about it.

So while we’d usually be criticising the software experience as the thing to hold a MIUI handset back, the Redmi Note 10 Pro actually fares well. In combination with its hardware loadout that makes for a generally smooth experience – and a long-lasting one. Can’t say much better than that.

In terms of cameras the Redmi Note 10 Pro features what it calls a quad rear setup. That’s a bit of a stretch, really, as the depth sensor isn’t really needed or useful at all. And the ultra-wide angle isn’t the best of quality. But that’s most of the bad news out of the way.

The 5-megapixel macro sensor that’s on board is, just like that of the Mi 11, rather good fun. It’s not wildly accurate with autofocus, but at least it offers some. And sharpness isn’t pristine either – but it’s far better than what we’ve seen from umpteen lower-resolution so-called macro sensors on other phones.

The real take-way of the setup, however, is the 108-megapixel camera. If you can really consider it as that. While most makers use a four-in-one pixel methodology to gather more information and produce an image a quarter the size of the headline resolution, this Redmi goes with a nine-in-one pixel method. That means you’ll get 12-megapixel results as standard instead.

By using these nine pixels – think of it as a three by three row in a square – there’s the prospect of adding lots of comparison, more colour data, all of which can be processed into a sharp looking lower-res shot. Even in low-light conditions the Redmi Note 10 Pro’s results hold up well. We’ve been rather impressed.

There are limits though. As there’s no optical image stabilisation here, you’ll need a steady hand. And the Night Mode – which uses long exposure to combine multiple frames into one ‘brighter’ shot – doesn’t work well as a result. Without the stabilisation here things just don’t line-up well, making for soft, ‘mushy’ results.

No, there’s no zoom lens, so you don’t get any optical zoom fanciness, and the camera app is a bit compartmentalised in its approach, but the overall take-away from the Redmi Note 10 Pro’s camera is that the main lens delivers a lot from an affordable device.