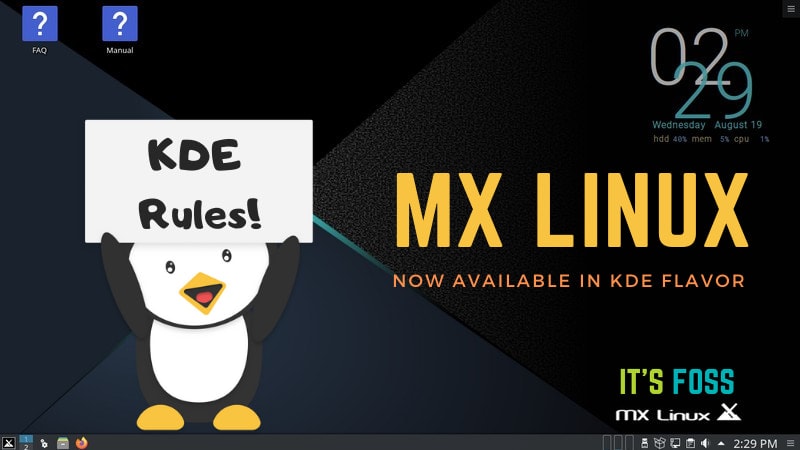 Debian-based MX Linux is already an impressive Linux distribution with Xfce desktop environment as the default. Even though it works good and is suitable to run with minimal hardware configuration, it still isn’t the best Linux distribution in terms of eye candy.

That’s where KDE comes to the rescue. Of late, KDE Plasma has reduced a lot of weight and it uses fewer system resources without compromising on the modern looks. No wonder KDE Plasma is one of the best desktop environments out there.

With MX Linux 19.2, they began testing a KDE edition and have finally released their first KDE version.

Also, the KDE edition comes with Advanced Hardware Support (AHS) enabled. Here’s what they have mentioned in their release notes:

MX-19.2 KDE is an Advanced Hardware Support (AHS) enabled 64-bit only version of MX featuring the KDE/plasma desktop. Applications utilizing Qt library frameworks are given a preference for inclusion on the iso.

As I mentioned it earlier, this is MX Linux’s first KDE edition ever, and they’ve also shed some light on it with the announcement as well:

This will be first officially supported MX/antiX family iso utilizing the KDE/plasma desktop since the halting of the predecessor MEPIS project in 2013.

Personally, I enjoyed the experience of using MX Linux until I started using Pop OS 20.04. So, I’ll give you some key highlights of MX Linux 19.2 KDE edition along with my impressions of testing it.

Out of the box, MX Linux looks cleaner and more attractive with KDE desktop on board. Unlike KDE Neon, it doesn’t feature the latest and greatest KDE stuff, but it looks to be doing the job intended.

Of course, you will get the same options that you expect from a KDE-powered distro to customize the look and feel of your desktop. In addition to the obvious KDE perks, you will also get the usual MX tools, antiX-live-usb-system, and snapshot feature that comes baked in the Xfce edition.

It’s a great thing to have the best of both worlds here, as stated in their announcement:

MX-19.2 KDE includes the usual MX tools, antiX-live-usb-system, and snapshot technology that our users have come to expect from our standard flagship Xfce releases. Adding KDE/plasma to the existing Xfce/MX-fluxbox desktops will provide for a wider range user needs and wants.

I haven’t performed a great deal of tests but I did have some issues with extracting archives (it didn’t work the first try) and copy-pasting a file to a new location. Not sure if those are some known bugs — but I thought I should let you know here.

Other than that, it features every useful tool you’d want to have and works great. With KDE on board, it actually feels more polished and smooth in my case.

Along with KDE Plasma 5.14.5 on top of Debian 10 “buster”, it also comes with GIMP 2.10.12, MESA, Debian (AHS) 5.6 Kernel, Firefox browser, and few other goodies like VLC, Thunderbird, LibreOffice, and Clementine music player.

You can also look for more stuff in the MX repositories.

There are some known issues with the release like the System clock settings not being able adjustable via KDE settings. You can check their announcement post for more information or their bug list to make sure everything’s fine before trying it out on your production system.

MX Linux 19.2 KDE edition is definitely more impressive than its Xfce offering in my opinion. It would take a while to iron out the bugs for this first KDE release — but it’s not a bad start.

Speaking of KDE, I recently tested out KDE Neon, the official KDE distribution. I shared my experience in this video. I’ll try to do a video on MX Linux KDE flavor as well.