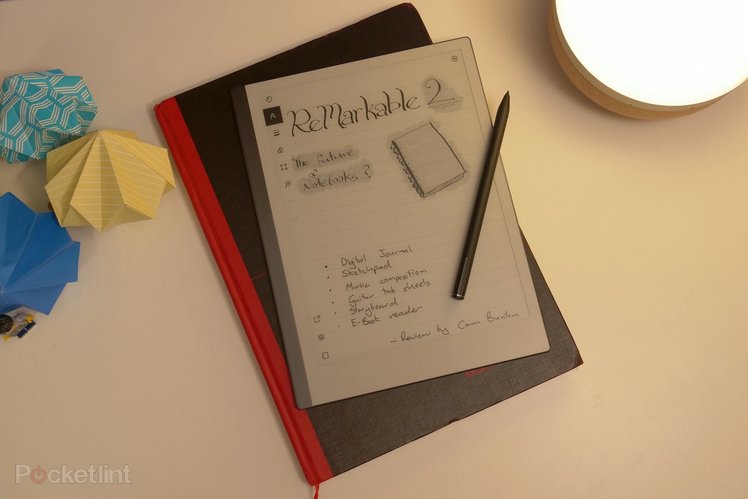 In the world of tech we’ve become accustomed to devices with multiple purposes. One could point at the smartphone as being the ultimate example of that – with plethora of apps, it’s replaced our physical alarm clocks, calendars, to-do lits, sticky notes, cameras, and many other functions. So when a gadget comes along with a single purpose, it catches our attention.

That’s what Norway-based ReMarkable is attempting to do with its paper tablet. It’s a digital tablet, but it’s designed to replace paper and pen only. To do that, the company has focused on recreating a genuine paper-and-pen experience of writing, so that – in this age of wanting to reduce our impact on the planet – it can replace physical notebooks and notepads.

It’s not cheap, but for those who love to write with a pen or pencil on paper – whether to jot down ideas, keep a journal, or just doodling – it’s a modern alternative to books, which either take up space on our shelves, or paper, which inevitably ends up in the recycling bin.

One of the elements that makes ReMarkable’s second-generation tablet so appealing its its design. It’s made from super slim piece of aluminium. And when we say super slim, it really is: imagine if someone sliced an iPad Air in half and you’re pretty much there. At just 4.7mm thick, the ReMarkable 2 is much slimmer than your typical tablet. 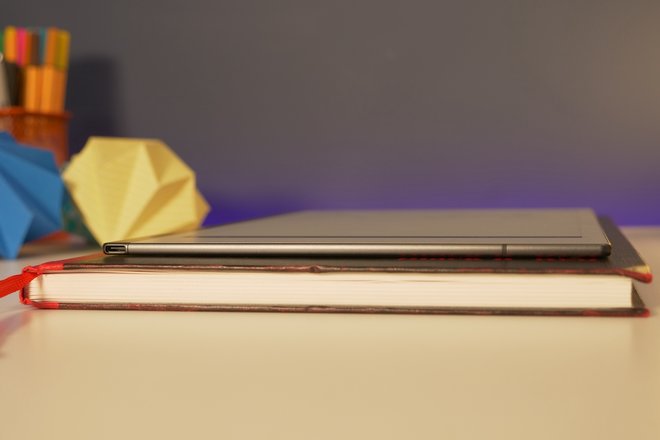 That slimness makes it a pleasure to hold, but also makes it really easy to carry around in your bag. You don’t need to make space for it. Likewise, at just 403 grams, it’s not that heavy either – about a third of a laptop’s typical weight.

This isn’t really for carrying around instead of your laptop, phone or tablet though. Due to the ReMarkable 2’s dedicated function, it’s really just to replace an A4 notepad. In that context, it’s far easier and more convenient to carry around than a Black’n’Red ruled notepad. And that’s where its attraction first sets in. For those of us used to carrying around paper sketchpads or notebooks, the lightness and ease of the ReMarkable 2 is really appealing.

The display takes up a lot – but not all – of the space on the front. It’s surrounded by a white bezel which is thicker on the bottom than on the top, to give you somewhere to rest your palm when you’re writing on the bottom section of the digital page. What we like is how this white frame is designed to match the default white surface of the E-Ink display. It’s also covered in the same matte-textured glass. 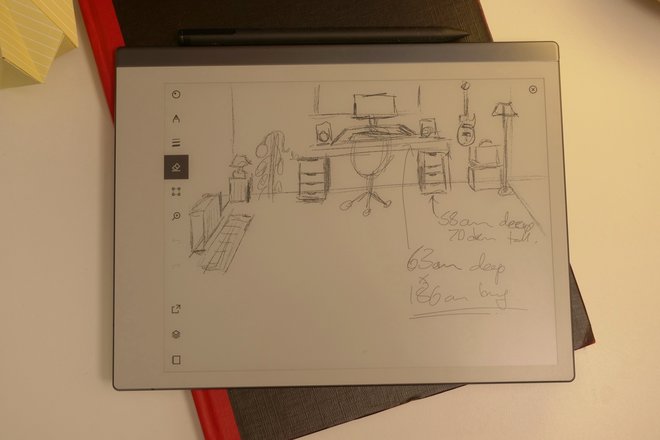 This same texture and finish is on the back too, which adds consistency to the feeling and look from both sides of the tablet. It contrasts nicely with the dark grey metal frame that runs around the edges and the metal side panel on the left edge. One nice little detail is the rubber feet on the back – there are four tiny rubber dots, one per corner, so that when you place the tablet down on a desk or table to write on it, it doesn’t feel uneven or slip around.

As far as ports and buttons go, there’s not much to talk about. There’s a power/sleep button right on the top edge in the left corner, with a USB Type-C port for charging on the bottom edge. Apart from that, you have a five-dot connection point on the left edge, with magnets built into the sides that allow you to snap on one of the company’s luxurious and lovely folio cases, or the essential Marker stylus.

After we’d finished gawping at the slim design, the thing that stood out is just how easy the ReMarkable 2 is to get writing on. That’s pretty much the entire point of this tablet – to feel like pen/pencil on paper. 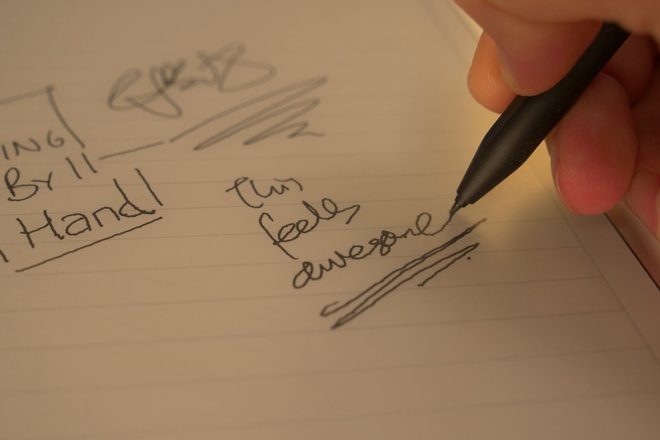 There’s no learning curve. No awkward repositioning of a hand because it was making the touchscreen react oddly. No having to hold the Marker (stylus) in a specific way to see what we were doing. We just put the tablet down, loaded up an Oxford-ruled lined paper template, then started writing. Easy.

That textured surface on the front is a big part of what makes this tablet such a pleasure to use. Your hand doesn’t slip like it might on a glossy slab of glass, like the displays on ‘proper’ tablets. What’s more, because it’s a transflective E-Ink display, the surface reflects the colour temperature of the light in the room, so it looks natural.

Reponse on screen is relatively lag-free. It’s not quite as instant as using a real pen on real paper, but it’s not far off and it’s not laggy enough that it stops the natural feeling. The monochrome E-Ink also means it’s easy to see what you’re doing. It’s inky black and relatively sharp thanks to its 226dpi resolution.

However, it’s not sharp enough that it looks super crisp, not so responsive that it feels effortlessly fluid. Both points that could be improved a little for third-generation model, if there is one in the future. 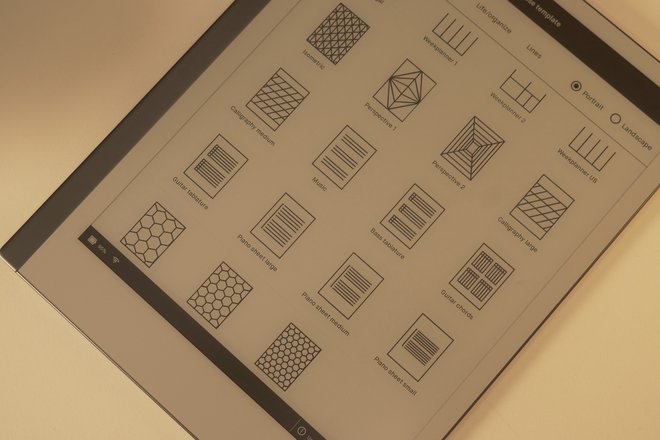 The only aspect to learn is the interface, but that doesn’t take long. The home page – if you want to call it that – is an overview of your notebooks. You create new ones by tapping an icon at the top of the screen, where you select what style of paper you want, which is where its versatility shines.

Not only can you choose from a wide array of standard lined, ruled and grid papers, but for the musically minded there are useful templates like guitar tab, bass tab, guitar chords, and piano sheet templates in various sizes. There are week planner templates for those who like to get their week organised in advance, and – for artists – various isometric, symmetrical and caligraphy templates.

Essentially, if you can buy a book from a stationery story with bespoke template lines in, ReMarkable has thought of it and added it to the available options. So if you need one notebook as a journal, another for practicising your calligraphy, another for song-writing, and another just for planning and doodling ideas, you can do that all in the one place. 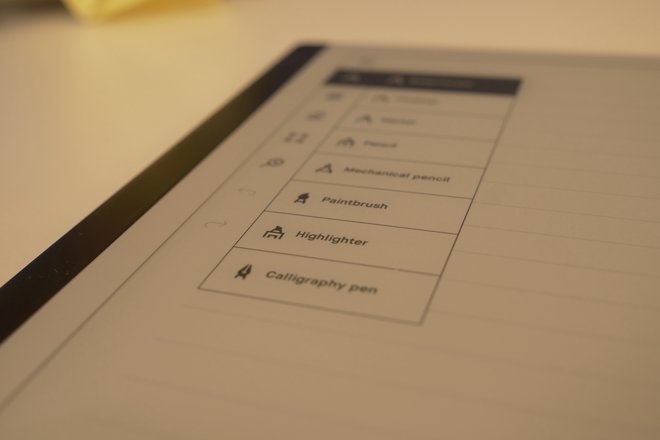 Once you’re in a notebook, drawing away, you can add multiple layers to a page and hide layers you’re not working on, just like working in painting app/programme, so it’s even flexible in that regard. You can also choose which style of pen you’re using within a page. For instance, choosing a paintbrush, pencil or pen, depending on how you want to draw or write.

The only thing that took us aback a little was that the ReMarkable tablet doesn’t come with a stylus as standard – that’s an additional extra. Which is unusual given how essential it is to using the tablet. And how pricey the product is in the first place. The Marker has a built-in ‘eraser’ at the end for rubbing out text on screen. There’s no setup required and you don’t need to charge it. It just works – much like a real pen.

While the ReMarkable 2’s primary aim is as a distraction-free creation tool, that’s not all it can do. With ePub and PDF support, you can load up e-books and documents on to it as well for offline reading. What’s more, with the iOS and Android smartphone apps, plus the MacOS and Windows 10 desktop apps, you can sign into your account on a smart device and read/sync pages and notebooks for easy access everywhere. 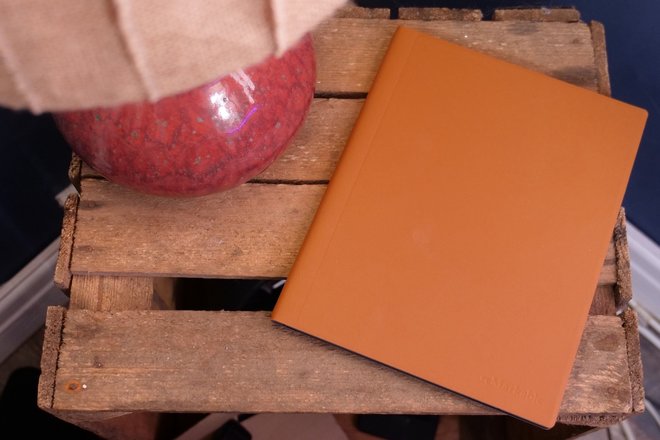 The biggest downside of the lot, however, is that the display is lacking a backlight. So those wanting to read, write or create while in bed at night will need a bedside lamp on in order to see what they’re doing. Again, much like real paper.