One feature that users found useful in Windows was the ability to drag and drop files onto the taskbar, to open them in the pinned program. For instance, you could drag a text file from Explorer on to the Notepad icon on the taskbar to open it. 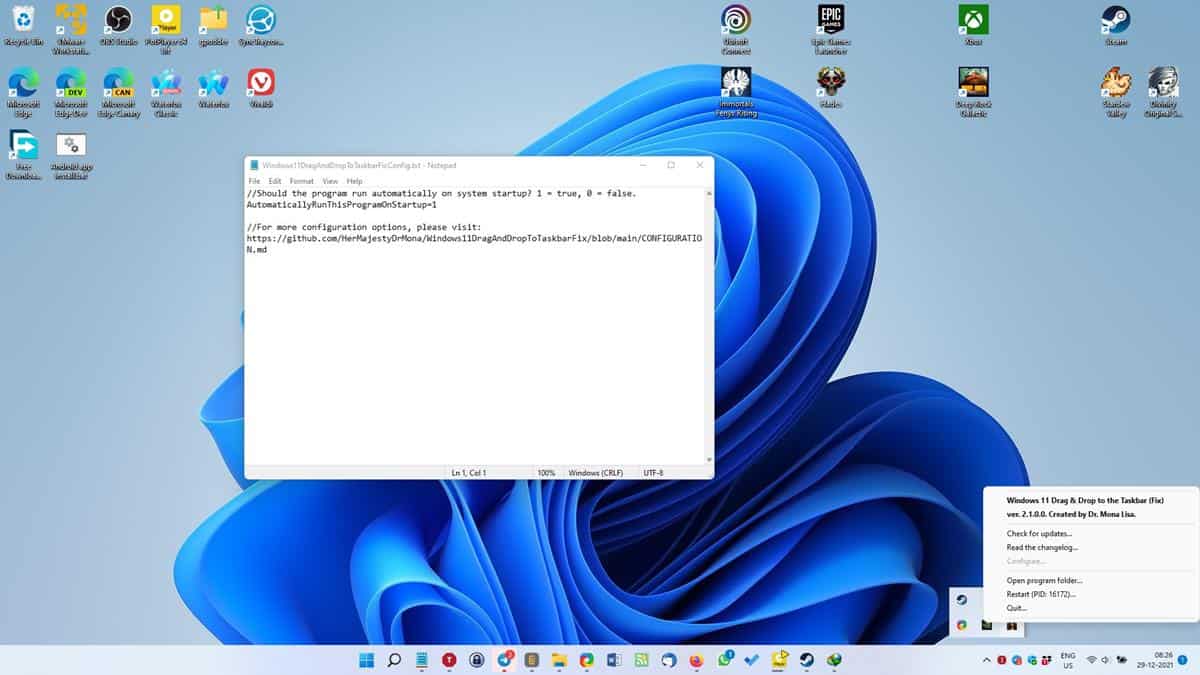 Microsoft removed this feature from Windows 11, along with quite a few options, not to mention the entire right-click menu’s usability. Martin has a nice write-up that talks more about the taskbar’s state in the latest operating system.

If you were using the Drag and Drop feature in prior versions of Windows, and want it back, in Windows 11, there is something that you can do. Like some other fixes that we have seen, this too requires a third-party solution.

The utility you will need for restoring the feature, is called Windows 11 Drag & Drop to the Taskbar (Fix). The name is kind of on the nose, but the program works quite well. Download the executable from GitHub. It is a portable software which creates a config file in the same folder. Run the program and an icon will appear on the system tray. This indicates that the application is active, it needs to be running in for the functionality that it restores.

To test if it works as intended, open any application that you’d like to open files in. E.g. Notepad. Minimize the window, and switch to Explorer. Drag a text document over Notepad’s icon and mouse over the preview pane that appears, and click it. The file will be opened in the text editor.

Note: You need to have the Microsoft Visual C++ 2015-2022 Redistributable x64 installed on your computer, else the tool won’t work.

How does it work?

When you drag something to the taskbar, the tool waits for a few milliseconds to see if the action is valid, and simulates the Win + T hotkey. This shortcut is normally used to switch between a program’s windows in the taskbar, but the application uses it to open files.

The only downside to the program is that it cannot create be used to pin shortcuts to the taskbar, and according to the project’s site, this function is not being worked on.

Windows 11 Drag & Drop to the Taskbar (Fix) is an open-source application, you can find the source code on the project’s GitHub repository. Right-click on its taskbar icon and select the Configure option, to modify its settings, you’ll see the config file open in a Notepad window. The program’s documentation lists several options that you can add per your requirements, so give it a read. The tool works out of the box, but it never hurts to have more options. Users who are using a custom theme may want to look into the setting that checks the colors of the pixels, to prevent the tool from accidentally detecting a mouse action as a drag.

As for an official fix, Windows Latest reports that Drag and Drop for the Taskbar will be added in Windows 11 22H2, which could arrive in a few months.

The post Restore drag and drop to the Taskbar in Windows 11 with this open-source program appeared first on gHacks Technology News.