ASRock sent us the the B560M Steel Legend for review. This is a Micro-ATX motherboard, featuring the Intel B560 chipset which is a more affordable entry into Intel’s now PCIe 4.0 capable platform.

ASRock markets the Steel Legend motherboard as rock-solid models with irresistible aesthetics. The former could be tested but the latter is debatable. Anyway, this one comes with four DIMM slots, a single PCIe 4.0 x16 slot and a single PCIe 4.0 x4 M.2 slot. Board supports Wi-Fi too via its third M.2 slot reserved for that purpose.

Disclosure: ASRock sent this B560 motherboard as a media sample for the purpose of this review. The company did not pay me to say anything particular about it. That said, all thoughts and opinions are of my own.

ASRock had the B560M Steel legend packed in their usual padded packaging. 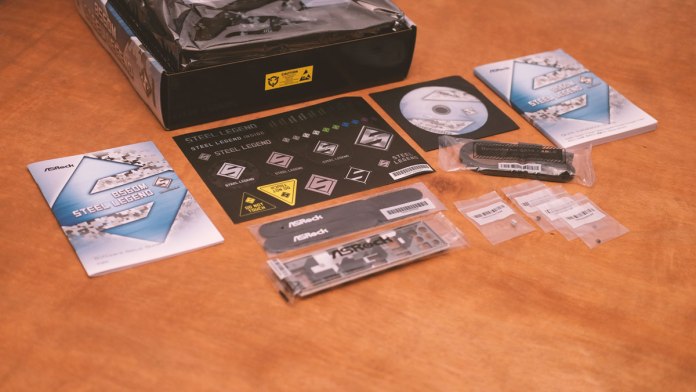 The product comes with the following items inside:

What we got here are essentials plus with some extras.

ASRock went with white and silver for the B560M Steel Legend’s colorway. This is a nice contrast to the rest of the board’s components. Now theme aside, the passive cooling solution for the board are all aluminum – from the VRMs, M.2 slot and to the PCH. A shame we don’t have one for the secondary M.2 slot. 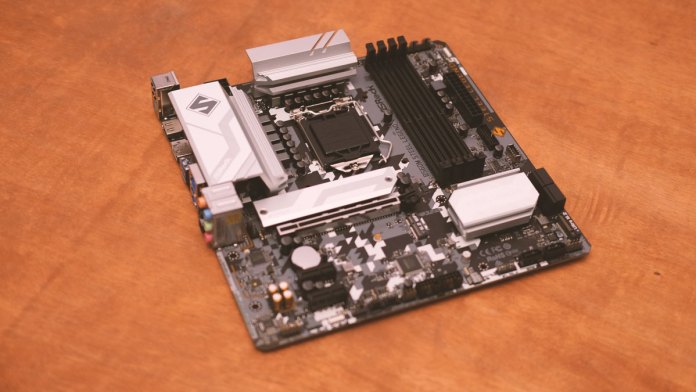 Back panel shows more about the soldering job involved into making the board. No red flags raised here but you have to make sure nothing comes in contact with the tantalum capacitor near the PCH. 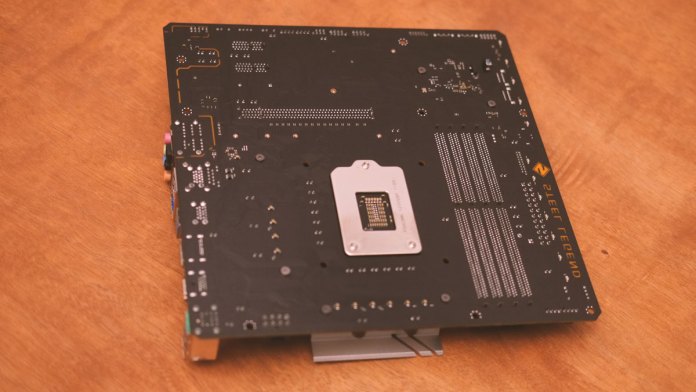 Powering the CPU is a 10 phase power design featuring 60A chokes and MOSFETs buried under the aluminum heatsinks. We also have two of the five fan headers here along with two 4-pin LED headers. 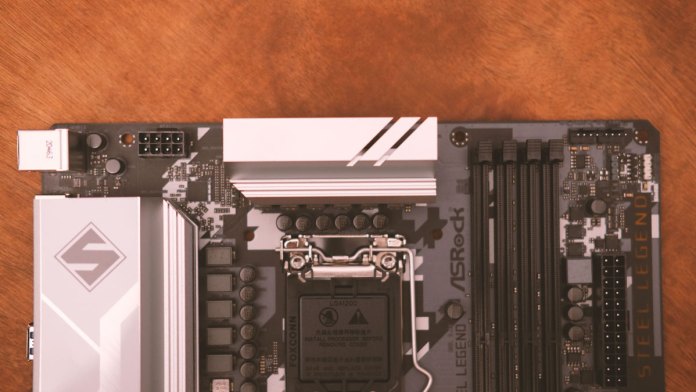 We have the usual suspects here as far as storage headers are concerned. Usually, though you’d get a USB 3.2 Gen 2×2 at the back panel I/O but ASRock decided to put a Type-C header for it. If you need the ultra fast interface, you really have to get a case that could negotiate with it. 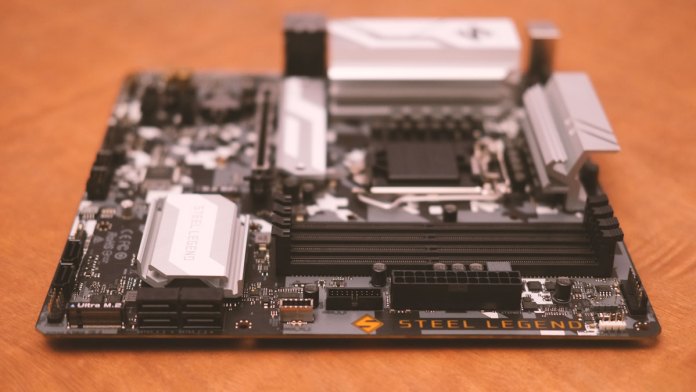 Bottom row is busy as usual. We have the second M.2 slot here along with the 3rd one reserved for Wi-Fi modules in a 2230 form factor (Key E). The extra fan and LED headers are located here as well. 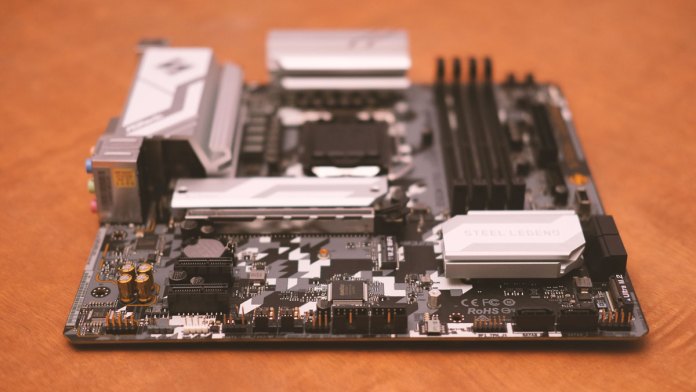 Rear I/O ports are decent. Recent boards I’ve tested doesn’t come with SPDIF out so I appreciated ASRock’s effort into including it here along with the legacy PS/2 port. 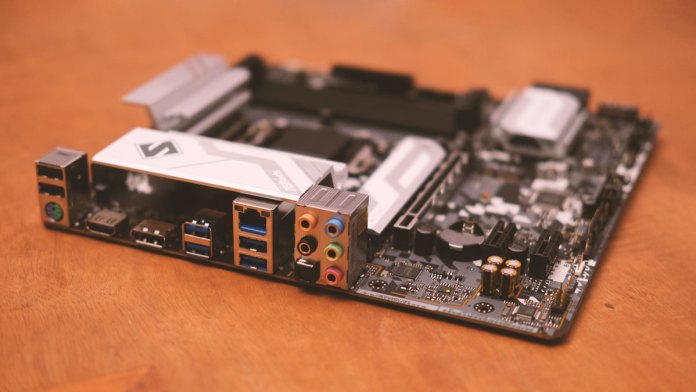 Board appear to be rock solid and well designed out of the box. ASRock even went with open-ended PCI 3.0 x1 slots just to make sure that it could accommodate physically longer interfaces with x1 support.

ASRock went simple with the B560M Steel Legend’s UEFI. The Easy Mode is what it is, featuring shortcuts for its features and statistics from the most important sensors. 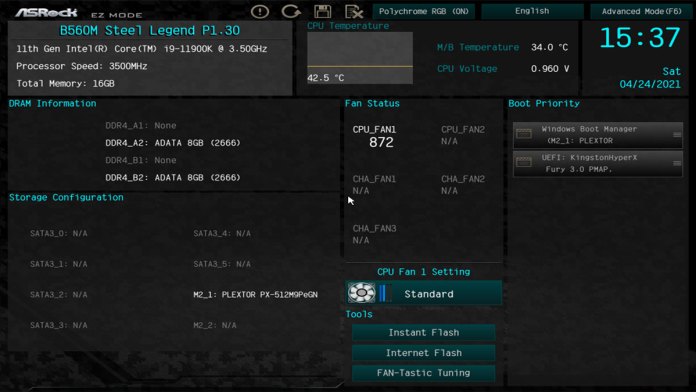 There are 8 main menus here with the OC Tweaker as your go to menu for CPU, DRAM and Voltage configuration. Note that overclocking is strictly enabled for memory alone. For CPU overclocking, you really have to get a Z590 chipset based motherboard. 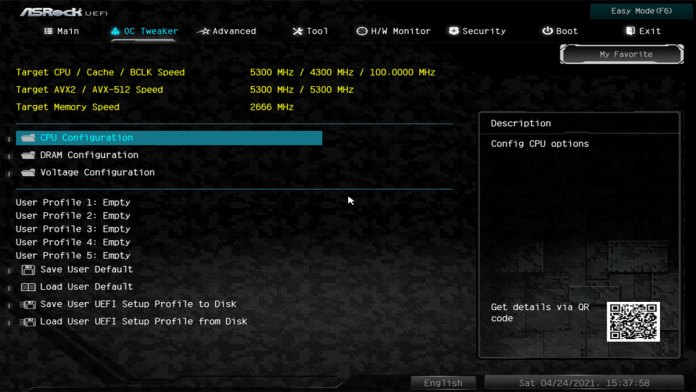 Advanced is of course where the PCH options could be found. Power state related options for the CPU are also located on this menu. 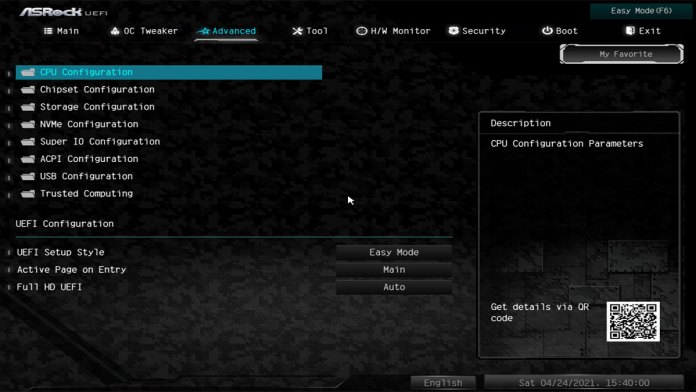 Tool is where the defining features of the motherboard is located. RGB lighting for the translucent Steel Legend logo could be disabled here along with network based customer support. You may even securely wipe your SSD here prior to installing Windows or your desired OS. 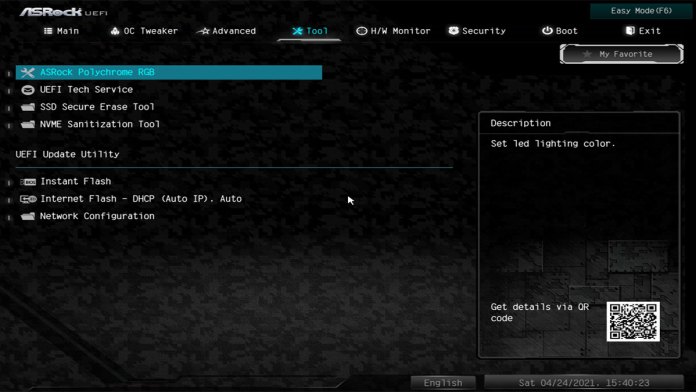 H/W monitor is self explanatory. Tons of sensors here though with a decent update rate. 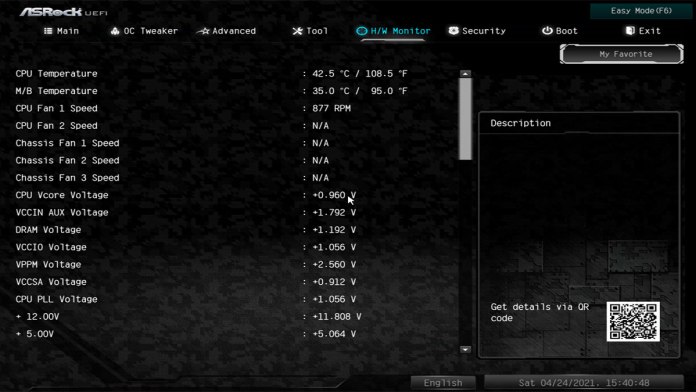 The FAN-Tastic Tuning is a rather simple fan speed profiler. No dedicated pump header here so make sure the pump is running constantly at 100% for a more consistent performance. 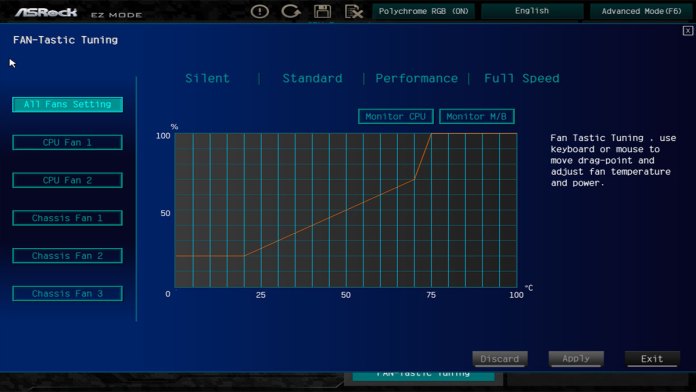 Firmware is good. ASRock even added a mini manual for it. RAID support is no where to be found though.

System performance is evaluated by industry standard benchmark tools and real-world applications if required. The system is tested with the following software configurations:

Outlined below is the test system specifications as well as the software and or applications used for the review:

We utilized the AIDA64 System Stability Test to check out how the system handles thermals. For this measurement, we loaded the stress test with the CPU as the only option enabled. Temperature readings are taken with HWiNFO with an ambient temperature of 27°C. CPU cooler used for this test is the Noctua NH-U12S Redux. 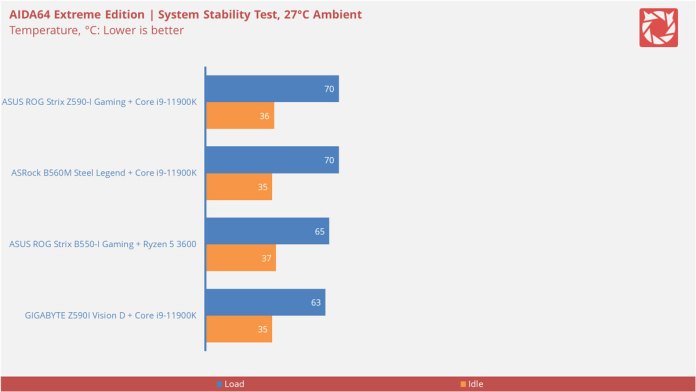 First order in the review is the CPU temperature which is affected by both power and fan profile. Here, we could see the Core i9-11900K reaching 70°C which is still good considering the peak in vCore – more on this later.

VRM, chipset and the main M.2 SSD maintained excellent thermal output though when they are under load.

Total system power is also checked out. Power readings are then recorded with a watt-meter while voltage readings for the Vcore and the most common rails are taken via HWiNFO. 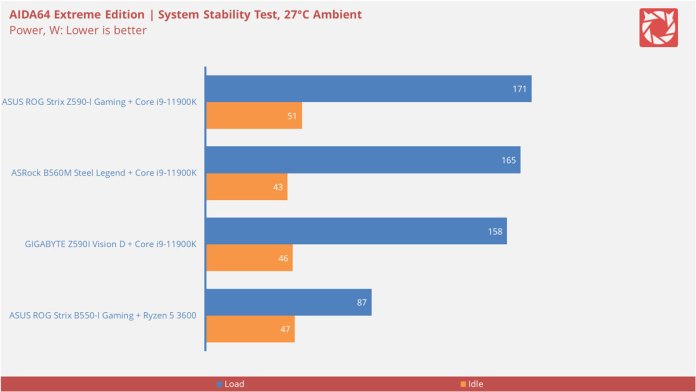 For the most commen rails, there isn’t much to say since all of them are within spec at idle and at load. Vcore is a different animal though, peaking at 1.400v which is aggressive. Still, this is something you’d want to tweak and is possible to do via the voltage configuration sub menu of the UEFI.

Noise level is also taken into consideration to check the differences between fan controllers. Decibel readings are taken with an industrial grade A-weighted sound-level meter. Ambient noise floor is ~30dB(A). 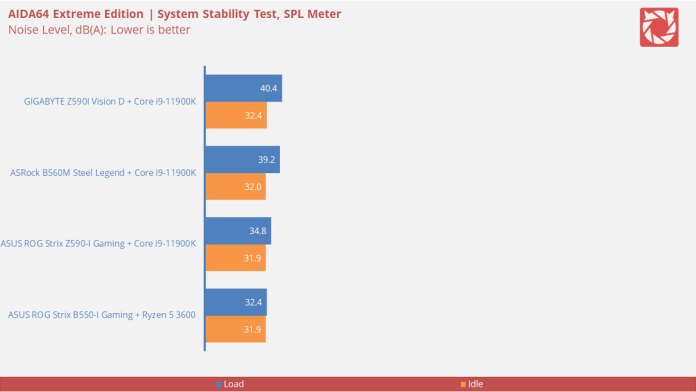 Noise level is pretty similar to the GIGABYTE Z590-I due to the added voltage needed to run the CPU at full load but with a bit tamer maximum RPM level to boot. There’s a merit to adjust this but I’d rather adjust the voltage for less power and heat first.

CPU performance is gauged via AIDA64’s CPU Queen Benchmark. This simple integer benchmark focuses on branch prediction capabilities and misprediction penalties of the CPU. Simple, easy to run and replicate. 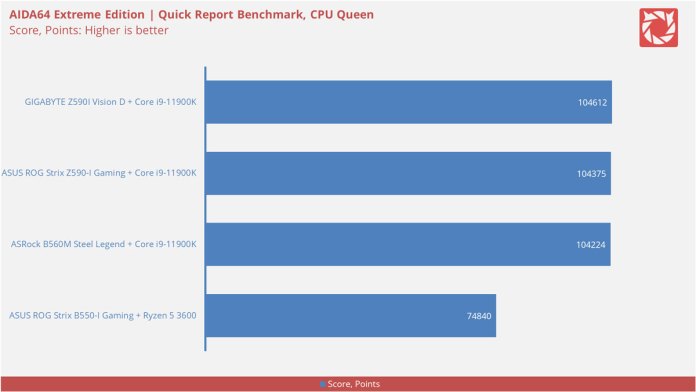 Memory latency is also tested with the Cache and Memory Benchmark built within AIDA64. Latency is what interest us here due to how motherboard designs could affect it. 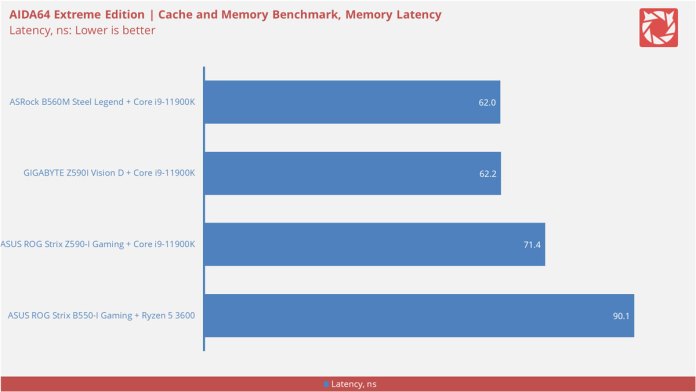 The graphics card and PCIe interface performance are also checked with AIDA64 using the GPGPU Benchmark. We selected the Single-Precision FLOPS benchmark for this test. Results are posted in GFLOPS. 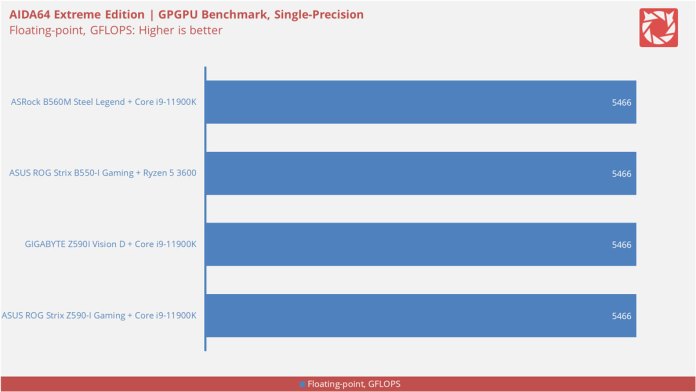 Performance is in line with the Z590 boards but it edges them at the memory latency result. ASRock is not joking around this area.

CrystalDiskMark is a simple storage benchmark widely used in the industry. For the storage test, we aim to check out the performance of the most commonly used interfaces found in a motherboard. The sequential read and write are the focus here. Storage devices used are the 256GB (External) and 512GB (Internal) Plextor M9Pe PCIe 3.0 NVMe SSDs. 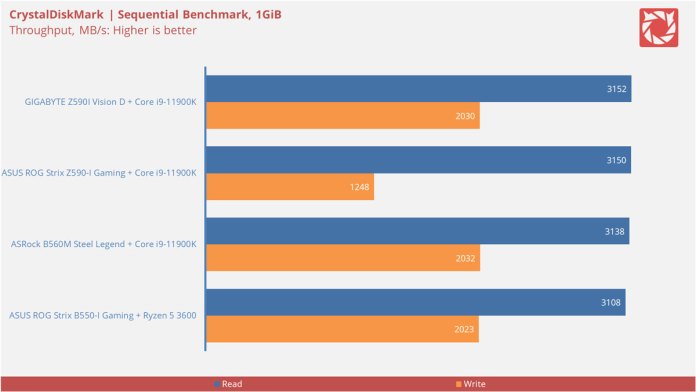 Another excellent performance output from the ASRock B560M Steel Legend here with the exception of the USB 3.0 / USB 3.2 Gen 1 interface. It is the fastest at read with a 459MB/s output but the write performance could be better. We did not test the USB 3.2 Gen 2×2 though. We simply do not have an internal Type-C that could handshake with the interface. Sad testing noises.

The RightMark Audio Analyzer is a nifty tool to measure the quality of the motherboard’s audio interface. Our results are obtained by playing and recording test tones passed through the audio chain using the Focusrite Scarlett Solo as the ADC. Sampling rate and bit-depth are at 48KHz and 24-bit respectively.

Now THD+N estimates the amount of harmonic distortion that takes place when a signal with large amplitude passes the testing chain. The test signal used here is a sine wave at 1kHz.

Objectively, the ASRock has a decent noise level based on our RMAA audio chain test. THD + Noise however picks up the 60Hz power hum along with some harmonics at 2KHz (-90dB) and beyond. IMD looks better though.

Subjectively, the Realtek enabled B560M motherboard with its embedded amplifier will suffice gamers owning a Sennheiser HD58X – able to drive it at decent levels. This could power my HE400i too but that’s already pushing it.

NetIO-GUI is a straight forward Windows frontend application for the “netio” command-line utility. This benchmark requires a client and server for it to work. The ASUS ROG Rapture GT-AC2900 is our router of choice here to test the Ethernet and Wi-Fi performance of our motherboard.

Network performance is rock solid. Nothing to complain here really.

ASRock bundled the Steel Legend with the following applications which are downloadable via the ASRock Live Update & APP Shop:

More could be downloaded there but I have not tested it. Similarly, we did not test the RGB lighting of the board. The onboard one works though but we did not took any pictures. To learn more about the board’s features, head over to the official landing page linked at the introduction of this review.

The ASRock B560M Steel Legend is a Micro-ATX motherboard built to house the latest Intel 11th generation processors and it just works. There’s nothing exceptionally awesome about it except for the memory latency and the price but then again, if you look closely, it’s a board made for those who needs a good platform to put their intended stuff in.

For example, the board doesn’t have Wi-Fi and you could add an internal one via its thrid M.2 slot. There are also 2x PCIe 3.0 x1 slots for added expansion and a 2.5GbE LAN as an added bonus. Board also supports ECC modules in non-ECC mode. This might sound trivial but those features are sometimes enough to sway buyers into picking this board up.

Of course there are missed opportunities still such as the decision to put the Gen 2×2 interface to the header instead of the rear I/O and the aggressive CPU power at peak. The latter could be easily fixed via the UEFI and we could say the internal super speed USB 3.2 interface could be a feature that some might want to check out.

In closing, the B560M Steel Legend is a well built product. Course it’s not perfect so if the implementations made by ASRock sounds good to you then it is a go. This board is still recommended by yours truly though, no doubt about that.

The ASRock B560M Steel Legend is a nice Micro-ATX motherboard at its designated price point. However, you have to keep in mind its strengths over its weaknesses in order to be utilized at its full potential.