The Z490 chipset is perhaps the biggest jump that Intel made so far over the Z390 chipset. For starters, the Z490 features Intel’s LGA 1200 socket for the 10th generation Corner Lake-S processors.

Now the board we’ve got here is the ASUS ROG Strix Z490-I Gaming. This is one of the higher end Z490 chipset based ITX motherboards from ASUS, aimed directly at the SFF enthusiasts. It comes with almost everything the full Z490 chipset has to offer, with the constraints and limitations of the ITX form factor. Without further ado, let us check this board out the second time around.

The ASUS ROG Strix Z490-I Gaming comes packed inside a compact motherboard packaging. The product comes with the following items inside:

Plenty of interesting things to check out with this bundle. Now let us move on to the board itself.

The ROG Strix Z490-I Gaming follows the recent trend with ASUS’ ITX products – which is the inclusion of a daughterboard together with an enclosed back panel area with an integrated I/O shield. This is a really clean looking motherboard that exudes a premium aura wherever you look at it. 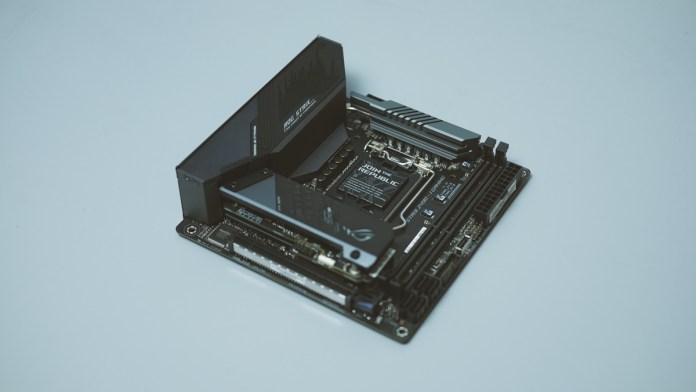 Layout in general is well organized. Everything you need to see at the edge are located at the edges of the board. All headers and or ports that needs to be together are grouped as well. 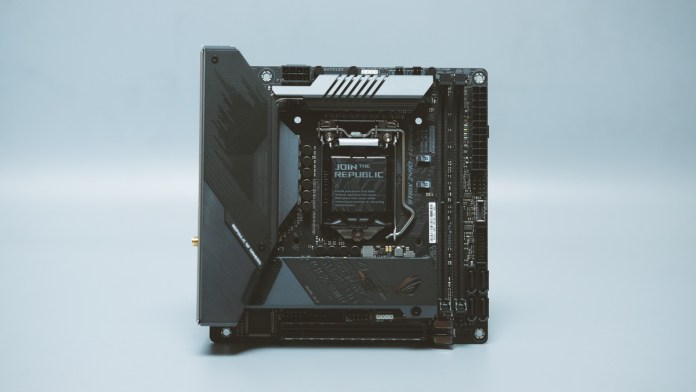 Behind the board lies an excellent solder job. We could also clearly see the VRM components here. No M.2 port here though, in contrast to the older ROG Strix models. Everything is just laid at the front. 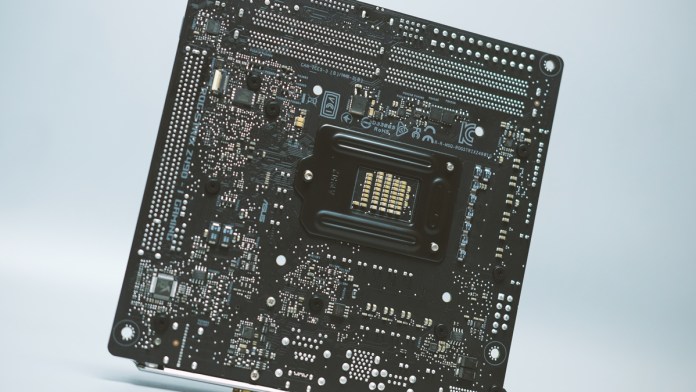 Top most part of the board has two fan headers and the 4-pin AURA header. We also got an updated 4+4-pin power connector here that ASUS dubs as the PowerCool II socket. It’s basically a reinforced CPU power header with tighter than recommend specifications. 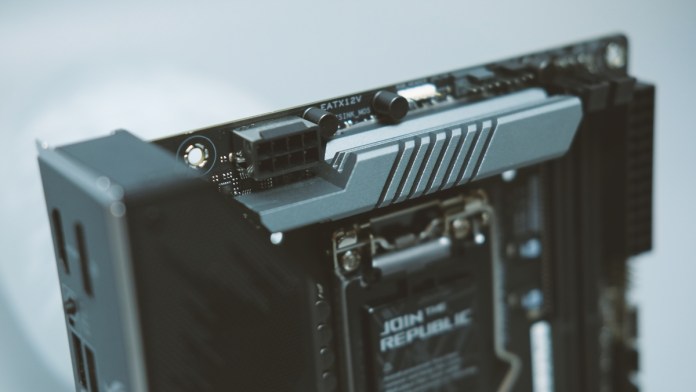 The motherboard is built for SFF systems, but ASUS still managed to pack an 8+2 power phase design for overclocking. ASUS also improved the VRM cooling with an included 40mm fan and a unified heatsink for the chipset and VRM. The heatsink itself acts as the backpanel IO cover. 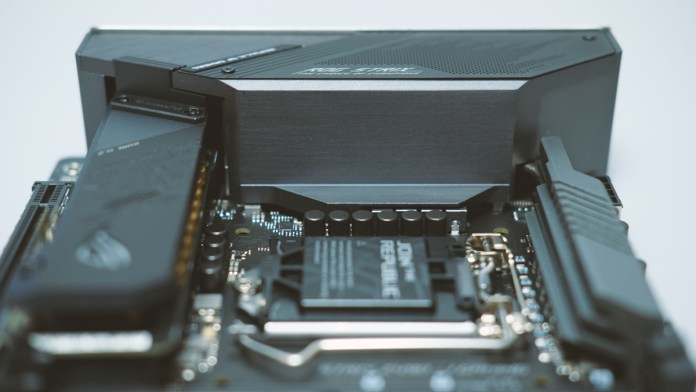 The right side of the board houses the usual headers for power, storage and connectivity. From top to bottom, we have the USB 2.0, USB 3.2 Gen1, USB 3.0 Gen2 and the SATA ports. We also have the Clear CMOS and the T-Sensor header here as well. Both these headers would be a pain in the ass to use with a PCIe card in place so make sure to prepare ahead. As for the memory, ASUS specified a maximum capacity and frequency for the DRAM at 64 GB and 4800 MHz respectively. That frequency support is a courtesy of the OptiMem II technology, improving trace layout to significantly enhance memory stability and compatibility. 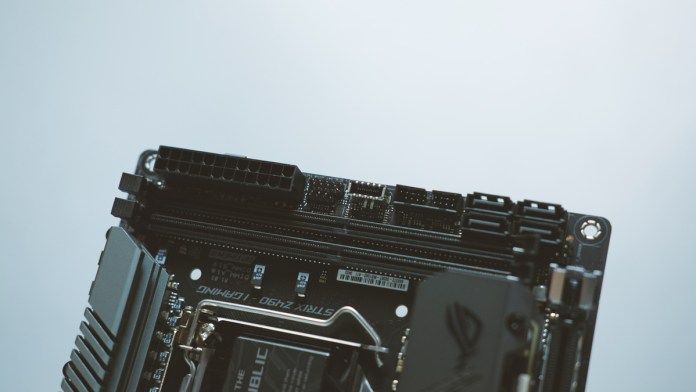 The bottom most area features the PCIe 3.0 x16 slot that’s probably the only downside of the board since we’re expecting full PCIe 4.0 support for future CPUs back then for Z490 chipsets. In spite of this, PCIe bifurcation is supported so you could run compatible storage expansion cards at x8 + x4 + x4 and x4 + x4 for RAID. The front panel and extra fan header is located on this area as well. 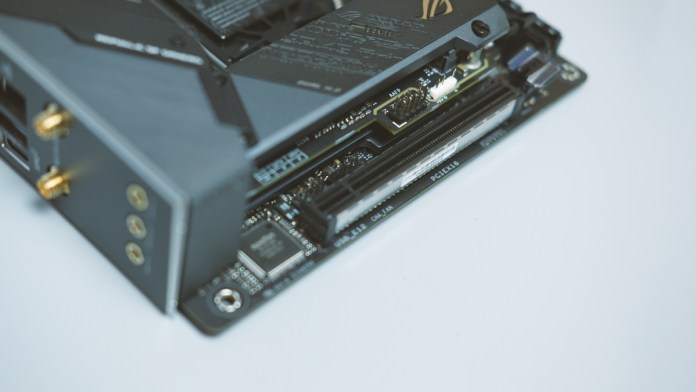 Back panel options are not bad. We have four USB 3.2 Gen2 here, together with the usual assortment of display ports. We also have a BIOS FlashBack button here with a matching UEFI update capable USB port. According to ASUS, there’s no need for a CPU and memory for the update to work. 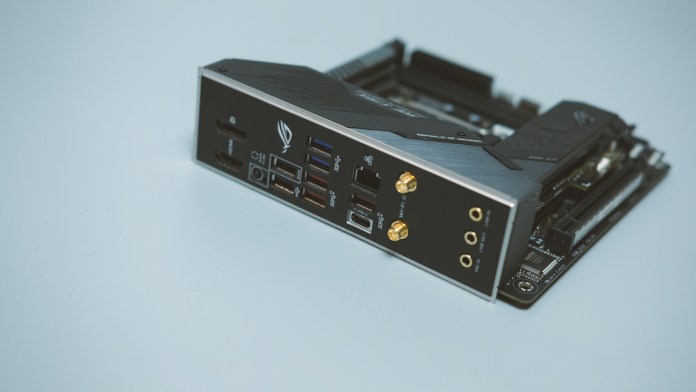 Audio solution lacks the extra 3.5mm ports and S/PDIF out put found on larger boards but it is a step up compared to the usual Realtek options with a SupremeFX S1220A CODEC. 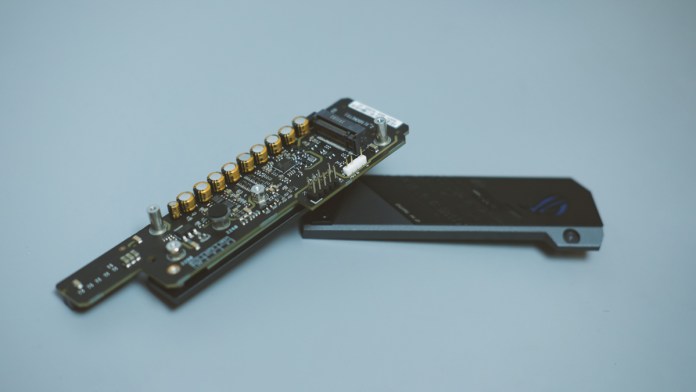 Now the daughterboard is one of the main highlights of the Z490-I Gaming. It is basically a 3-in-1 board with dual M.2 slots mixed to the SupremeFX S1220A. This comes with two OP amps (front panel) and should be able to drive headgears with up to 600Ω of resistance according to ASUS. SnR is also rated at 113dB. The PCH is just below this board, sharing the same cooling solution with the rest.

ASUS utilized their tried and tested UEFI BIOS Utility. This is a 4:3 UEFI with a straight forward EZ Mode. 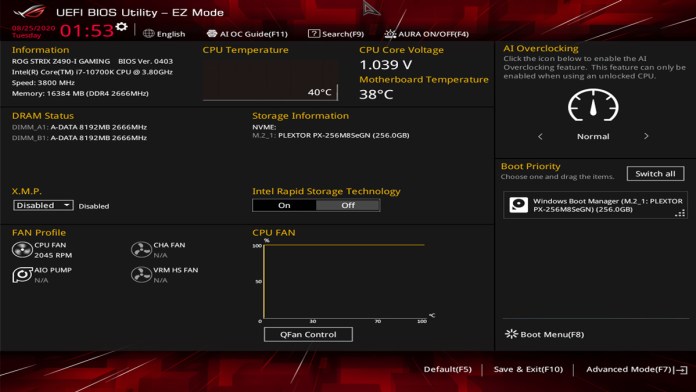 There are 8 main menus found within the UEFI’s Advanced Mode. The Ai Tweaker is definitely the highlight here and is pretty much similar to what you would see on other Intel Z490 chipset based ASUS motherboards. 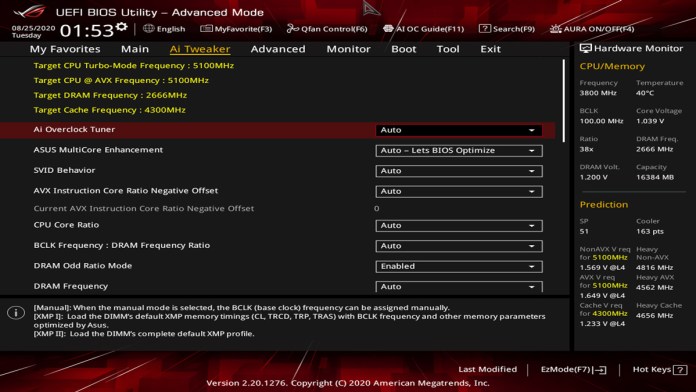 The Q-Fan control is another ASUS staple. All the fan headers could be controlled here manually or with ASUS’ presets. 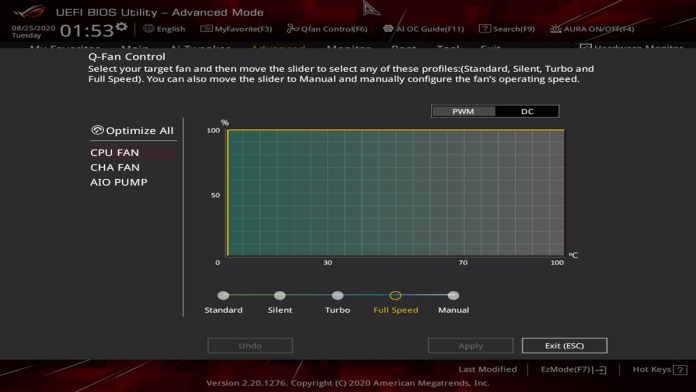 The Z490-I Gaming like many other Z490 motherboards from ASUS comes with the AI Overclocking Guide. This is a fool proof overclocking feature that should allow the system to automatically overclock itself based on profiling your CPU and cooling system. 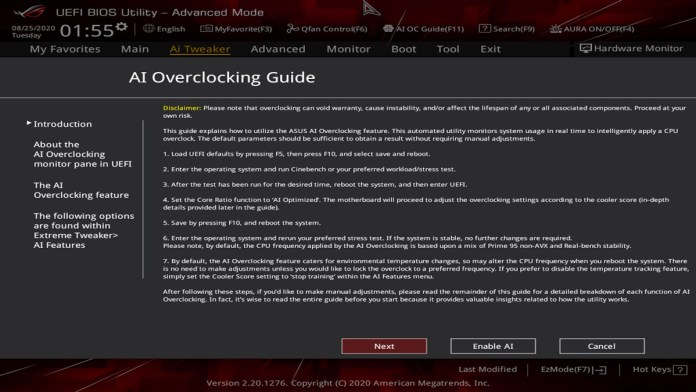 Outlined below are the test system specifications as well as the software and or applications used for the review:

Super PI is a single-threaded program that calculates pi to a specified number of digits after the decimal point. It is a widely used benchmark to check a single-core performance of any system. 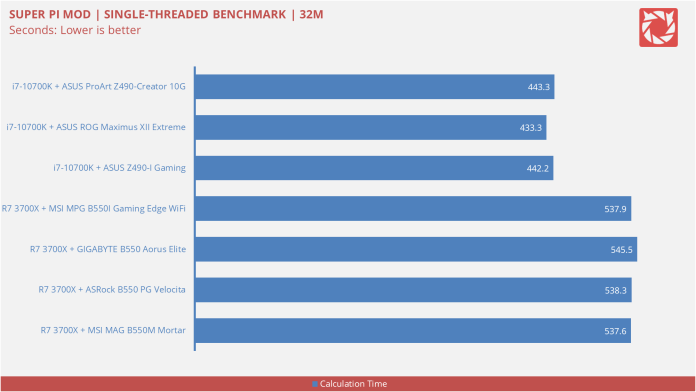 WPrime is a multi-threaded program that calculates a set number of square roots. A good application to check the multi-core performance of any system. 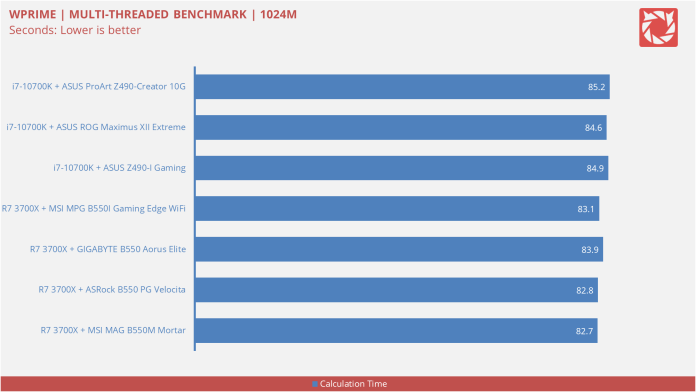 The AIDA64 Extreme Memory Benchmark measures the data transfer bandwidth and latency of the system memory. The latency is measured for this benchmark. 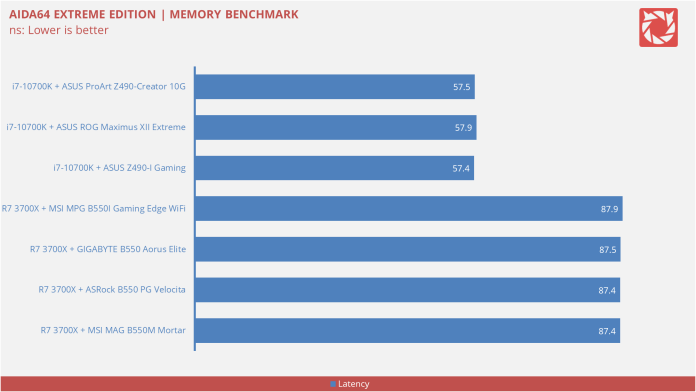 Synthetic performance is in-line with other Z490 chipset based motherboards. The fastest one at the AIDA64 Extreme Edition’s Memory Benchmark when it comes to latency.

GIMP is a free and open-source image editing tool. 7MB worth of images are processed and converted for the benchmark. 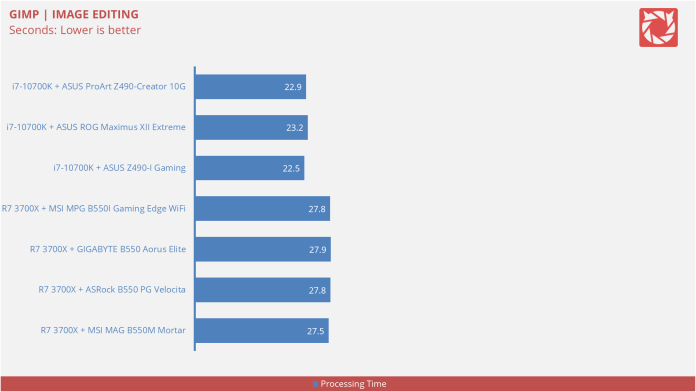 HandBrake is a free video encoding tool that supports a wide variety of media codecs. 150MB worth of MP4 video is converted using the H.264 codec for the benchmark. 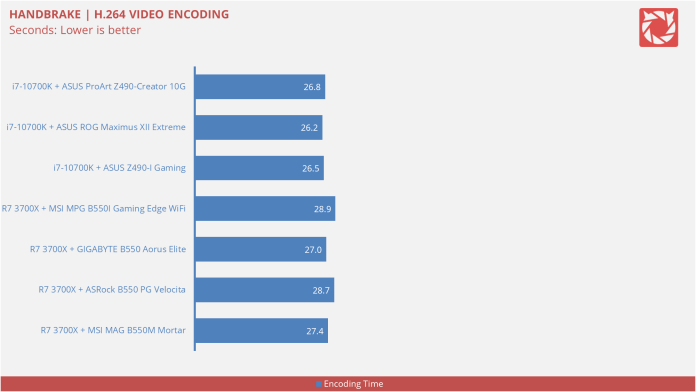 WinRAR is a file archive utility that creates, view and unpack numerous archive file formats. The built in benchmark tool is utilized to for the benchmark. 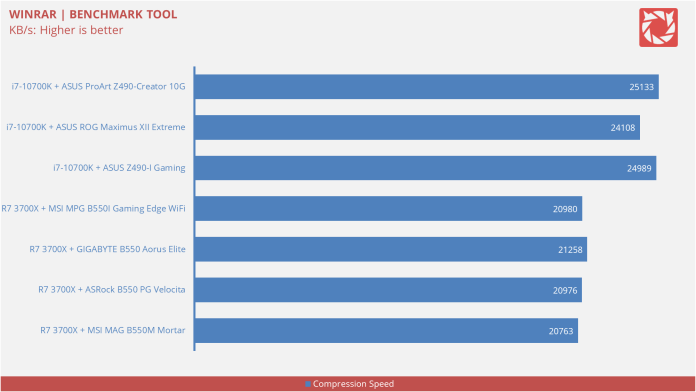 Pretty good performance we got here from the Strix Z490-I Gaming. Just next to the higher end ROG Maximus XII Extreme on all accounts.

Counter-Strike: Global Offensive or CS:GO is a multiplayer first-person shooter developed by Valve. Settings are set to their maximum with V-Sync and motion blur disabled. 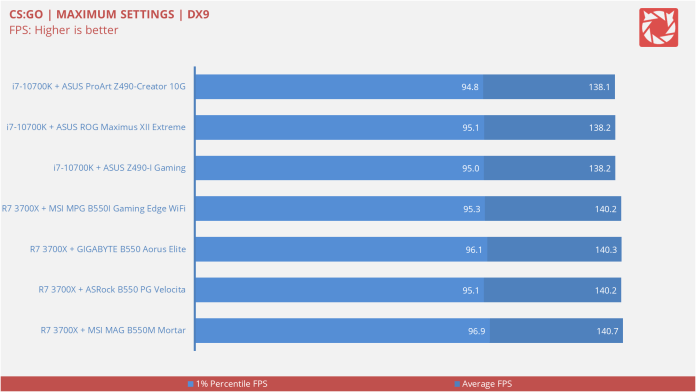 DOTA 2 is a multiplayer online battle arena game developed and published by Valve. Settings are set to their maximum with V-Sync disabled.

Assetto Corsa is a simulation racing game developed by the Italian video game developer Kunos Simulazioni. Settings are set to their maximum with V-Sync disabled.

Gaming performance is generally good except for Assetto Corsa where AMD dominated the 1% Percentile FPS.

AS SSD is a storage benchmark widely used in the industry. The total score is taken to evaluate the storage performance.

Storage performance is pretty good as far as SATA interface is concerned; But of course, AMD chipsets still got the upper-hand around this area.

RMAA is a tool designed to test the quality of audio devices. A loop-back is configured with a sampling rate of 24-bit at 48000Hz for the test. Our setup essentially tests the quality of the line-in and line-out of the audio solution.

Now Noise Level is pretty good at -93.3dBA. Frequency response on the other hand is flat which is good. THD + Noise is -77.5dBA though which is average.

As for power, it could drive my Sennheiser HD58X at a desirable level. Wish it got more oomp though like the Maximus XII Extreme.

NetIO-GUI is an application used to test the performance of a network. The LAN round trip time is our concern here, checking out latency anomalies if there are any. The client and server are connected on the home network via Cat 5e cables.

The motherboard has a wired network latency at 1ms on any packet sizes tested. Wireless is about 10-12ms.

Now power draw is ATX level – both idle and load. Nothing surprising here though.

There are ways to overclock and underclock any compatible unlocked Intel Core series processors with the ASUS ROG Strix Z490-I Gaming. One way is to do it within the UEFI and the other is via the ASUS AI Dual Intelligent Processor 5.

The ASUS AI Overclocking feature is one method you could use to overclock your system via both options. It basically works in three simple steps:

You may also do it manually once the AI Overclocking already got an approximate of the system’s capabilities. You may check this out via the Prediction panel at the lower right of the Ai Tweaker’s menu.

ASUS had the ROG Strix Z490-I Gaming bundled with a number of applications that should help you maximize your motherboard’s potential. That should include the following software and or applications:

Lighting is simpler compared to the other SFF Strix models. Gone are the PCB lighting and instead, you’d get an elegant RGB lighting on the ROG logo found at the daughterboard’s heatsink. LED strip headers are included as well for your extra lighting requirements.

The ASUS ROG Strix Z490-I Gaming is a well made motherboard for the SFF class and nothing on this review changed what we thought of it on our previous board overview.

Performance wise, what do you expect? This is a Z490 chipset motherboard with an ITX form factor with a tad better memory performance due to the nature of its design.

Build quality and layout wise, ASUS is on point with this one. They maximized the use of available real estate with the daughterboard’s design which is pretty neat on its own. Two M.2 slots are available, with both supporting SATA and PCIe 3.0 x4 modes under one single stack. With this in mind, ASUS could also add another fan header but alas, we only got three max.

The ASUS ROG Strix Z490-I Gaming retails for about 16,640 Pesos. It goes head to head with the ASUS B550-I Gaming which is a PCIe Gen4 compliant motherboard. If that is not important to you, then the blue camp’s option is something you should consider for a SFF gaming rig.

The ASUS ROG Strix Z490-I Gaming retails for about 16,640 Pesos. It goes head to head with the ASUS B550-I Gaming which is a PCIe Gen4 compliant motherboard. If that is not important to you, then the blue camp’s option is something you should consider for a SFF gaming rig.