Corsair has expanded its hugely popular range of gaming keyboards with a mechanical solution aimed toward the masses. Dubbed the K60 and coming to retail in multiple flavours, this new addition promises “a durable and vibrant mechanical keyboard at an affordable price.”

Sounds promising for those of us who liked the look of the flagship K100 but gawked at the £230 fee, and on paper the K60 RGB Pro appears far more favourable at £110 for the regular model, or £130 in a low-profile configuration. Question is, what’s been cut to meet these price points, and does Corsair’s latest do enough to be the go-to choice for mainstream PC gamers?

As a stylish addition to your gaming setup, the K60 RGB Pro has plenty going for it. Corsair has topped the plastic chassis with a black brushed aluminium top plate that does well to repel fingerprints and provides a high-quality feel while enhancing overall rigidity. Dimensions of 441mm x 137mm x 35mm are also reasonably compact for a full-size layout, and if you’re partial to some RGB lighting, Corsair’s per-key illumination is among the best in the business.

The effects are both bright and vivid, with 10 predefined patterns selectable via FN shortcuts 1 through 0, and plenty of customisation options through iCue. What’s interesting, and perhaps an indicator of the K60’s lower-end ambitions, is that the transparent key switch sits atop an all-white socket that’s almost as large as the key itself. As a result the white groundwork is clearly visible from the sides, and isn’t going to be everyone’s cup of tea. I find it looks cheap when the keyboard is off, but fire up the lights and the white sockets do a decent job of accentuating the RGB effect.

Begin using the keyboard and it won’t take long for those who are accustomed to Corsair peripherals to realise that a few familiar features are conspicuous in their absence. There’s no onboard memory for profile storage, the smooth volume scroller synonymous with so many Corsair keyboards has fallen by the wayside, there are no dedicated multimedia keys – though seven of the F keys do provide shortcuts – and if you prefer to keep your headset or mouse connected directly, you’ll be disappointed to find that there’s no USB passthrough, either.

You also don’t get a palm rest with the £110 model, and though the keyboard requires only a single USB 3.0 Type-A port on the host PC, the thin 1.8m rubber cable doesn’t feel quite as robust as the braided solutions we’re accustomed to seeing. Take all of that into account and you’re left feeling as though the entry fee ought to be lower; given the feature set, we’d like to see the K60 RGB Pro positioned comfortably below the £100 mark.

So other than the stylish looks, what exactly do you get for your money in terms of performance? K60 is intended as a step up from rubber-dome solutions and as expected Corsair employs Cherry’s new mechanical switch for the value market, Viola. First unveiled back in January, the Viola switch is a more affordable alternative to the popular MX line and is available in just one variety that closely resembles the linear feel of Cherry MX Red.

Both require a force of 45cN to actuate at 2mm with no bump along the way, but Viola is unique in that the actuation force ramps up to 75cN for the remaining 2mm of travel. The German manufacturer markets the two-stage travel as “CrossLinear,” and in practise it proves advantageous as the heightened force required to bottom out enables the keys to snap back quickly. The caveat to that is that there’s slightly more noise as the keys reset, but on the plus side, key switch build quality feels solid with consistent lighting and little in the way of wobble, and Cherry has retained its standard cross stem, ensuring compatibility with a wide range of existing keycaps.

The Viola switch ultimately lives up to its billing as a cheaper-to-produce alternative to Cherry MX Red, and it feels almost every bit as satisfying in use. It is a fine fit for a mainstream mechanical keyboard, and for the most part Corsair has the right idea with the K60 RGB Pro. Having stripped away many of the excess features, we’re left with a well-built solution that plays well and looks the part. 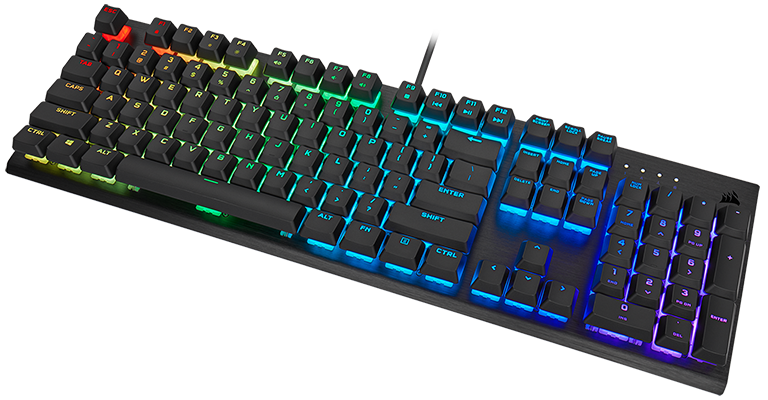 Bottom line: Corsair’s K60 RGB Pro ought to be a sensible first step into the world of mechanical gaming keyboards, but the £110 price tag feels steep given the minimal feature set.