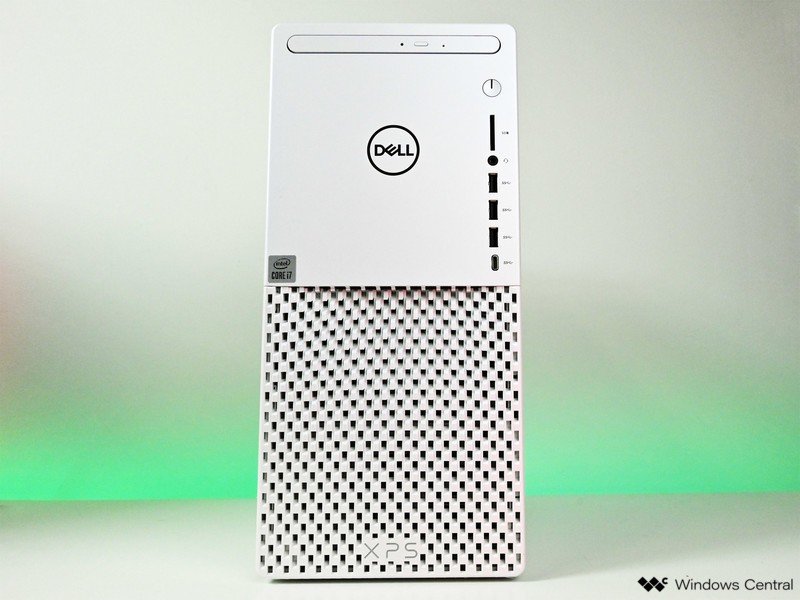 Dell’s premium creator’s desktop fits nicely into a well-packaged 19-liter case, but it also delivers a punch thanks to its RTX 3070 graphics and Intel processor.

Dell’s famous XPS line of laptops is well known, but the company also has an excellent range of desktop offerings to match that pro-level, creator genre where power is combined with a minimalist design.

The XPS 8940 Special Edition (SE) in white and regular XPS 8940 bring plenty of modern configuration options, ports, and the ability to run NVIDIA’s latest RTX 3060 or 3070 GPUs. While the inside of the XPS 8940 doesn’t look pretty, the exterior and value for performance make up for it.

Bottom line: The XPS 8940 brings a minimalist case design with Intel’s powerful 10th Gen i7-10700K processor and NVIDIA GeForce RTX 3070 graphics into a small package. With a nice assortment of front-facing ports, this is an ideal desktop for photo and video editors or creatives who need a powerful PC. 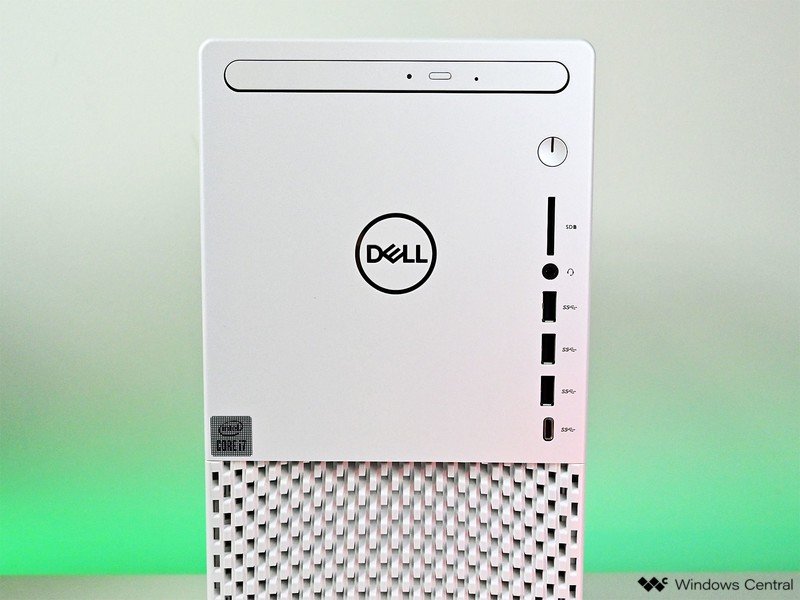 That many front facing ports make us happy.

The XPS 8940 SE is a mostly straightforward desktop PC in a modern 19-liter case. Configuration options run from 10th Gen Intel Core i7-10700 up to a mighty i9-10900K for an extra $392. There are only two GPU options, but both are very good with the RTX 3060 Ti and the much more powerful RTX 3070 for an extra $196. Considering RTX cards are tough to find these days, these are excellent choices.

Dell breaks storage up with a primary 512GB SSD with decent read and write speeds and a slower but more substantial 2TB SATA HDD for long-term storage. RAM starts at a modest 16GB of DDR4 but can be configured up to an appealing 128GB of DDR4 for an extra $931. 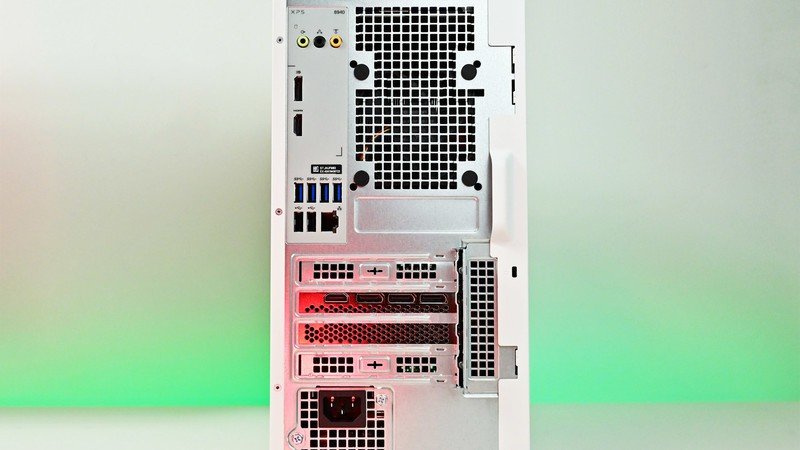 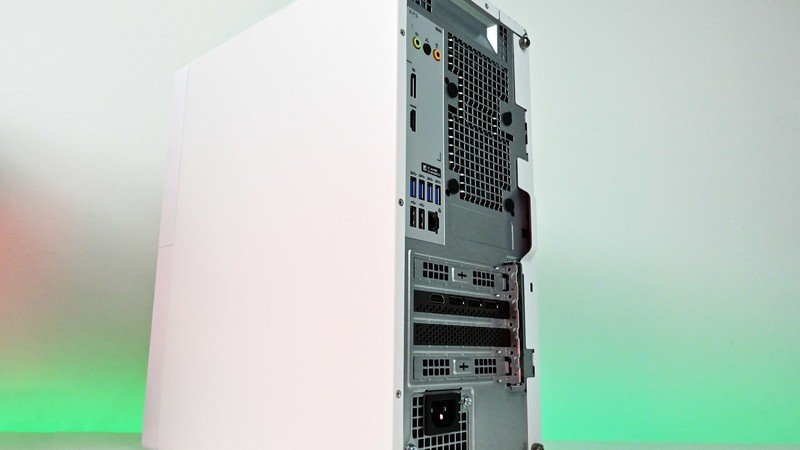 The case is exceptionally clean and minimalist, which is Dell’s goal here. It is a “mineral white” box with only modest flair in the front with its cleverly designed grilled intake. Seeing as the XPS 8940 can pack a punch in performance, that grill, along with the ample airflow, ensure this PC can perform for more than short bursts.

The front is also home to a nice variety of front-facing ports, including three USB 3.1 Type-A, one USB Type-C, a full SD slot, and a headphone jack — this is something I wish we would see on more desktop PCs as it is so much easier than reaching behind to find a port.

Dell includes a matching white keyboard and mouse in the box. Both are wired and relatively cheap, but the keyboard is quite lovely for typing on, and I would not mind using it for long writing sessions. Of course, you could spruce this setup by going wireless with a 60 percent keyboard, but at least Dell includes these accessories to hold you over. 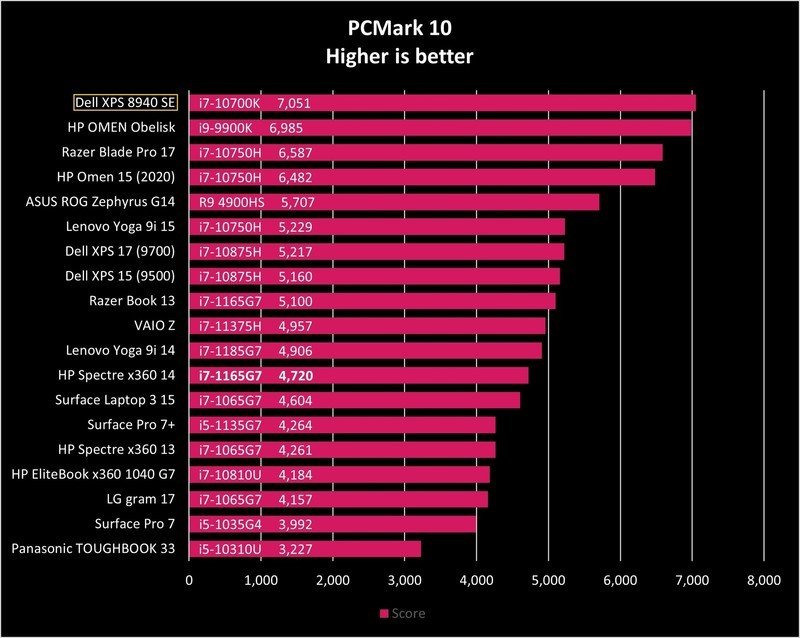 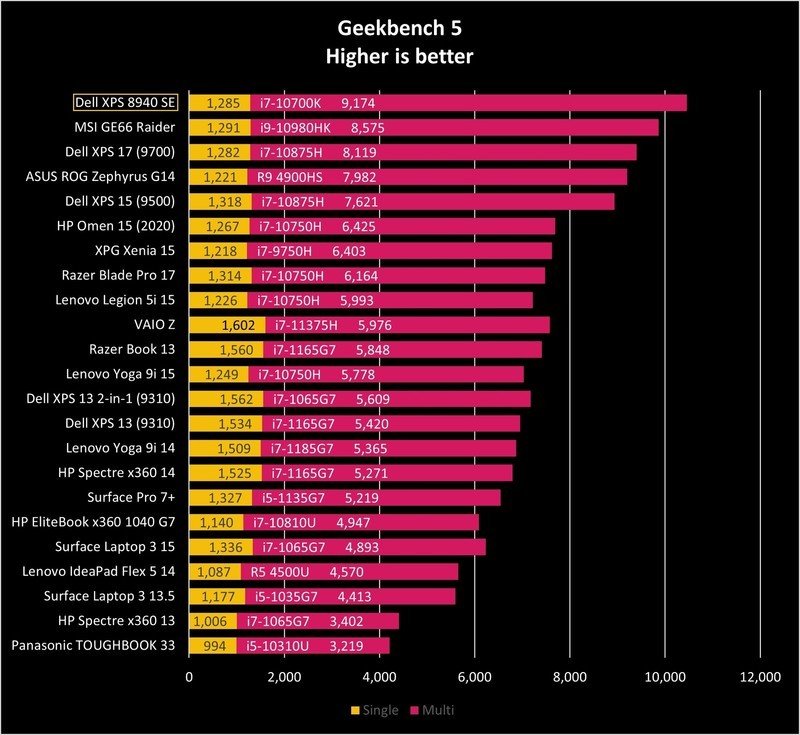 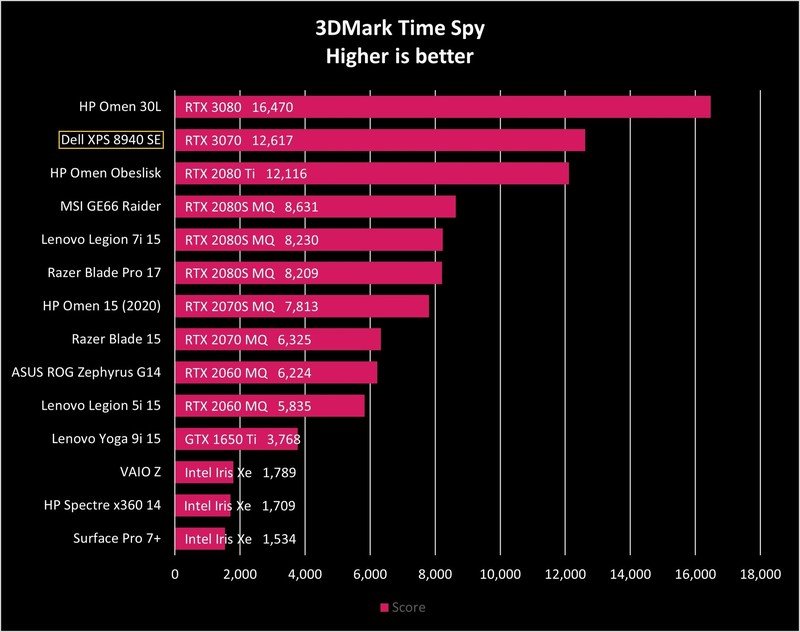 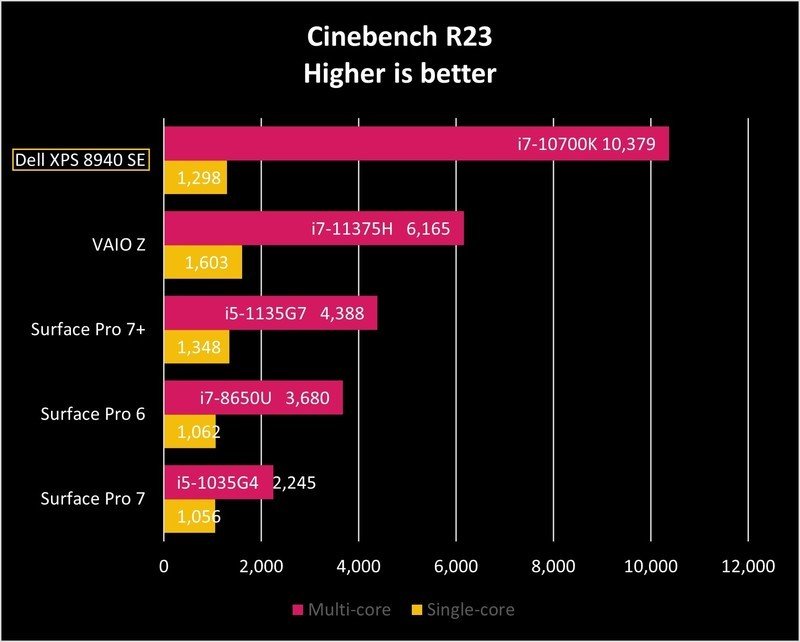 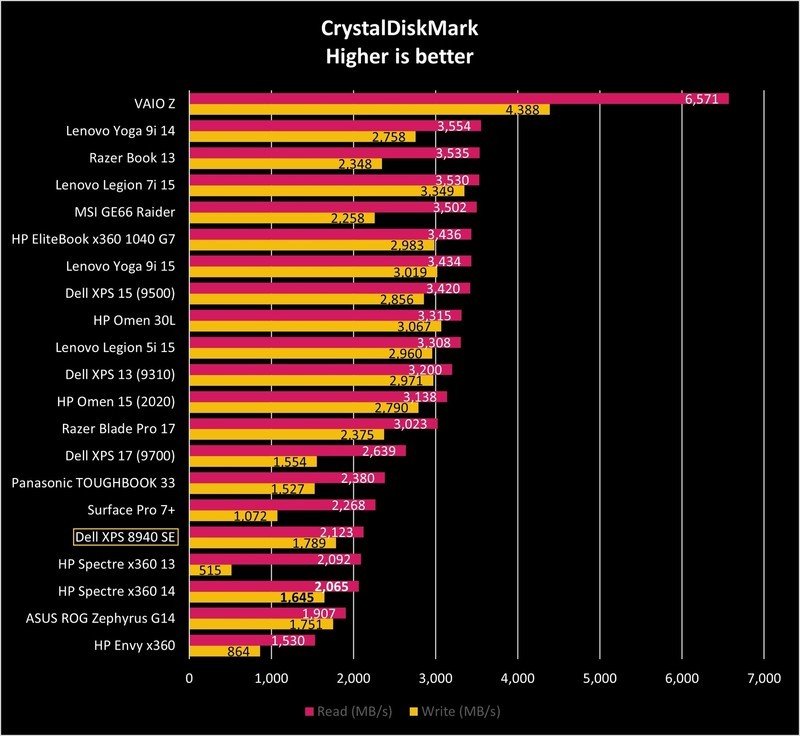 It’s also worth calling out that the XPS 8940 SE has a standard DVD read/write drive with an option for a Blue-ray one that can also read and write. It’s a feature that is increasingly rare but nice to have if you still rely on physical media.

Overall performance is excellent. While not meant to game, the XPS 8940 can play any AAA titles you throw at it, thanks to that RTX 3070 GPU. Sure, the fans will run a bit hot, and you won’t get as much performance as a gaming rig, but the XPS 8940 SE can have some fun when work is over. Keep in mind, cooling here is done with a traditional, albeit significant, heatsink and not more advanced water-cooling, which is needed for long, high-performance runs for gaming. 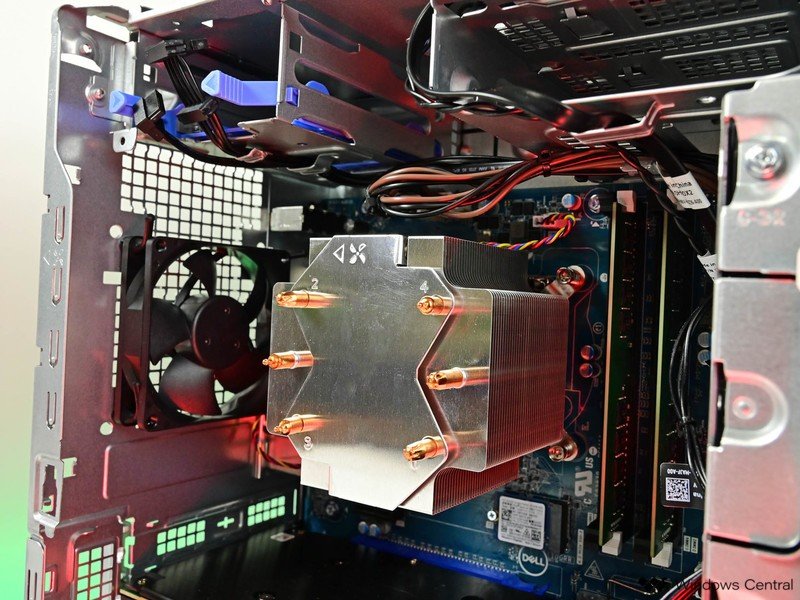 That’s not a pretty heatsink or interior.

From a distance (and front-facing), the XPS 8940 is a sharp-looking, clean, and minimalist design that would be perfect in any home or office. But once you get up close, take it apart, or even turn it around, you can see where Dell made some savings. The case feels low cost compared to more premium options. There are many thin plastic and metal parts with barely organized cabling. It’s what any off-the-shelf PC would look like ten years ago with none of the pizzaz or high-end refinements available from other OEMs.

One example: the metal heatsink had fingerprints on the top plate, evidently from the factory install process. It’s no big deal but it is a reminder this is a mass-produced PC meant to deliver peak performance while offering financial savings in exchange. This critique is purely cosmetic, and most people who buy the XPS 8940 are unlikely to ogle its hardware and design anyway. 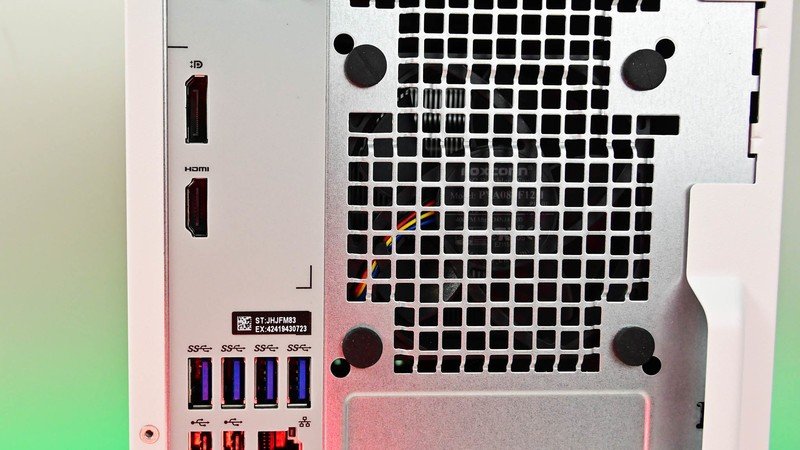 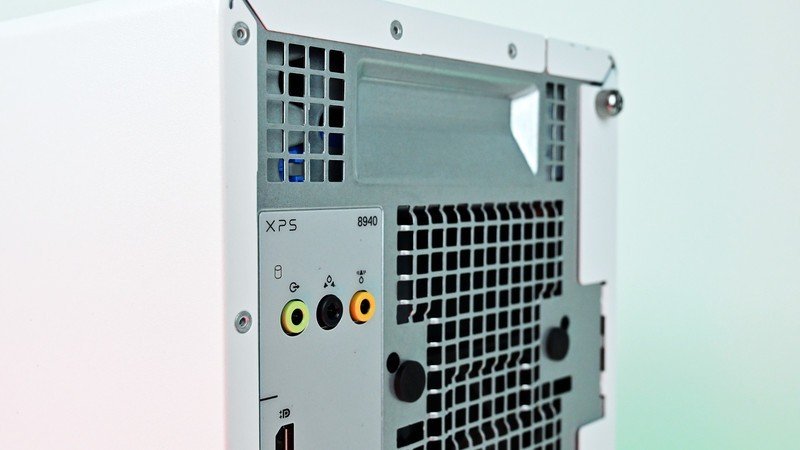 The lack of an AMD processor option is always going to be a sticking point for OEMs who often strike deals with Intel versus customers who prefer some of the advantages from AMD. The XPS 8940 SE is no exception as customers only have options for Intel Core i5-10400 up to the mighty i9-10900K and everything in between. Those are good processors, no doubt, but people prefer choice. At least for the non-SE edition, you can choose AMD Radeon for graphics. 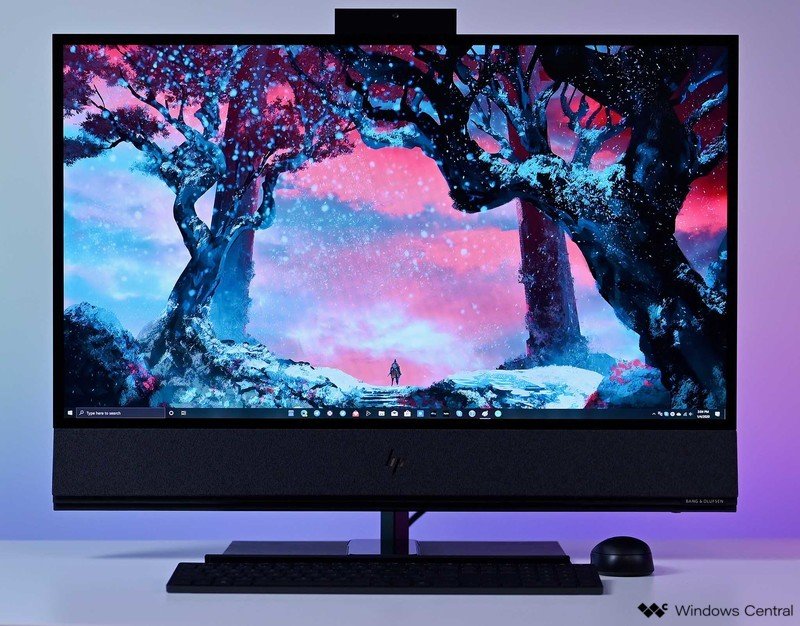 There is a lot of competition in the desktop PC space, ranging from DIY kits, prefabbed systems, expensive gaming rigs, all-in-ones (AIOs), and offerings from the major OEMs.

For the latter category, the HP ENVY Desktop compares more to the entry-level XPS 8940 SE, which is reflected in its lower starting price ($500) and lack of higher-end options like Core i9 and RTX 3070 (it maxes out at RTX 2060 Super).

If you want more performance while leaning more towards gaming, the Alienware Aurora R11 is an excellent choice if you can stomach the arguably bold case design.

An option for those who also need a quality display and keyboard with a mouse there is the outstanding HP ENVY 32 AiO. It features a massive 32-inch 4K display, loud audio, and a powerful RTX 2070 GPU. It’s an impressive machine that solves many problems (except you can’t upgrade components).

If you like the XPS 8940 SE, but don’t prefer a white colorway, you can opt for the regular 8940, which comes in black and has some other spec options that don’t reach the heights of the SE model, but it is slightly cheaper. 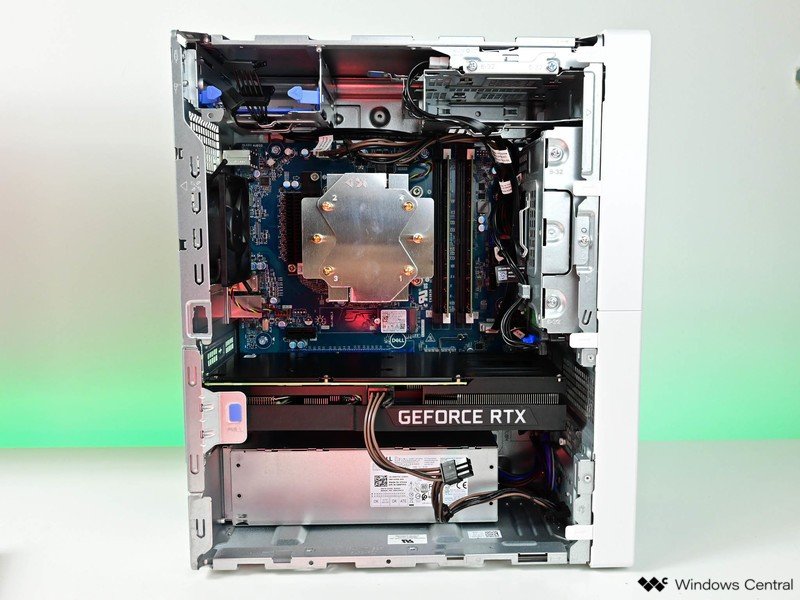 Those sure are computer parts.

The XPS 8940 SE does well when it comes to the fundamentals of a prosumer-level desktop PC. The CPU, GPU, and RAM all reach heights that any full-time video editor would be happy to use for work. Simultaneously, regular consumers can also benefit from the no-frills, easy to understand lower configurations. 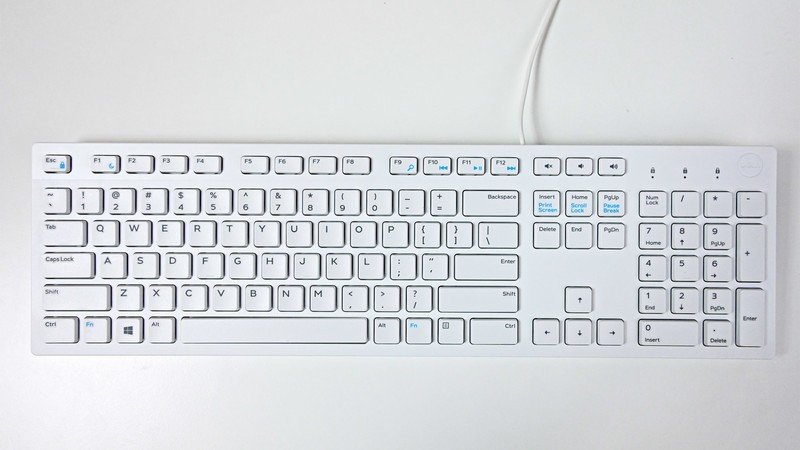 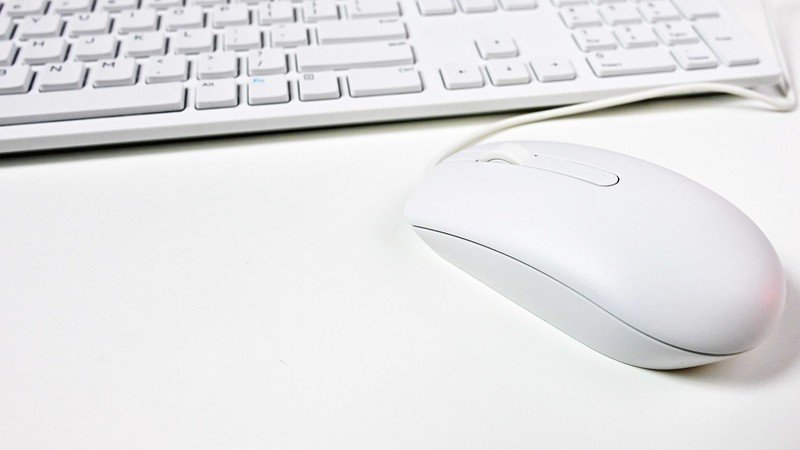 The case and accessories feel on the cheap side, but you certainly don’t notice these things when you are using the computer. The only interaction most people will have post-setup is plugging in peripherals, and there the XPS 8940 SE is fantastic. There is no reason to reach behind the computer anymore as everything needed is right in front.

There’s not a ton of options for upgradeability due to the case and wiring and 500-watt power supply, but swapping out cards, the CPU, adding RAM, and even a third drive are all possible – again, it is the basics, but that is who Dell is targeting here.

Overall, the XPS 8940 SE is a sweet, no-frills, but well-crafted desktop PC. If you are not interested in building your own, don’t care about fancy see-through case doors, lighting effects, or pretentious wiring, this desktop from Dell can still handle whatever you throw at it, which is what matters in the end.

Bottom line: The XPS 8940 brings a minimalist case design with Intel’s powerful 10th Gen i7-10700K processor and NVIDIA GeForce RTX 3070 graphics into a small package. With a nice assortment of front-facing ports, this is an ideal desktop for photo and video editors or creatives who need a powerful PC.