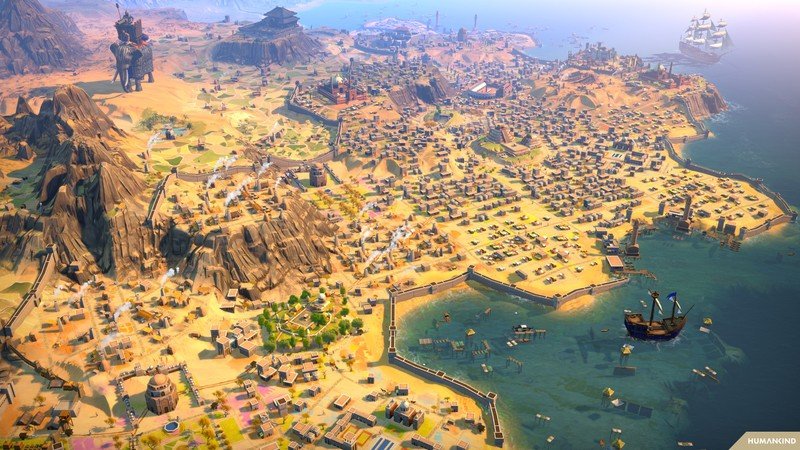 Humankind has been marketed as the “magnum opus” for its developer Amplitude Studios, creators of other 4X turn-based games Endless Space and Endless Legend. The game offers some fresh ideas but ultimately needs to be polished a bit more before it can reach its potential.

There are ways it could be improved. Amplitude can polish and refine through the inevitable post-launch support that is commonplace within the strategy genre, and plenty of helpful in-game and video tutorials can combat early-game confusion. However, it also touts exclusive Stadia features that don’t feel quite exclusive. The Stadia version is also lacking compared to the other PC versions depending on how important mod support and multiplayer is to you.

Bottom line: Humankind provides a solid foundation for the historical strategy genre with a unique twist, but the Stadia version may not be as feature-rich as other PC versions.

Humankind is a turn-based strategy game where you select units to move around a hexagonal grid while building cities and maintaining relations both good and bad with other factions on the map. Sounds familiar, but the key difference is how you go about creating an empire.

You will be traversing across different eras throughout humankind’s history to build it all up. The game starts off in the Neolithic Era where you need to scavenge around for supplies and ransack independent nodes on the map. The only way to move on from the Neolithic Era is to earn three stars by growing the population, hunting, and collecting science points. It may be small to start, but it creates a steady pace to explore the fog of war and find places to place an outpost, which will eventually become your first city.

The game officially kicks off with the Ancient Era where you need to pick one of several Cultures, each containing unique perks that focus on different aspects of civilization such as population, industry, money, science, and war. Each also has unique structures and units, but you won’t be stuck with them for the entire game unless you choose so. A new Culture can be picked each time you change eras, with some perks staying while gaining new stats. For example, you can start with the Harappans with a focus on food and increasing population in the Ancient Era, then switch to the Huns in the Classical Era, which focus on combat. Because of your ability to change Cultures, you’ll often find your empire becoming a hodgepodge of both old and new buildings, with Confucian schools next to pyramids and skyscrapers. 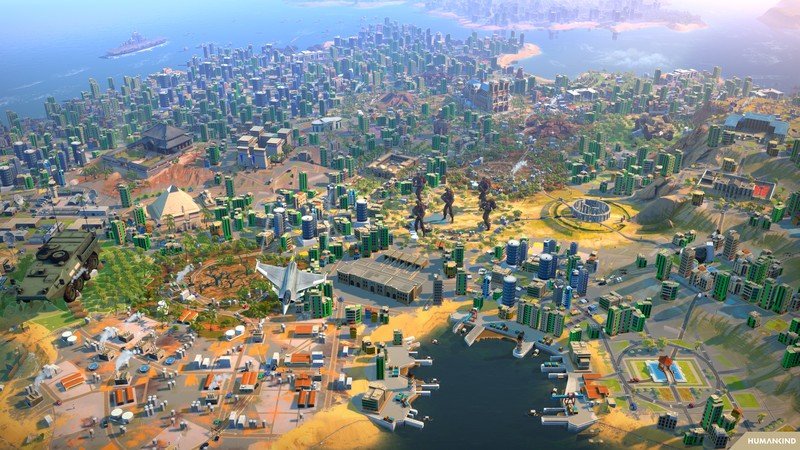 Progressing through an era also changes upon entering the Ancient Era and instead requires earning seven Era Stars from seven different categories that each offer three consecutive stars. The Era Star categories range from defeating a certain number of military units, increasing the population, earning money, or consistently adding new territories. The categories never change though, so you will be progressing the same from turn 20 to turn 200.

Humankind isn’t about “winning,” but what you do to get there.

Interestingly, there is no way to be stuck with an objective that doesn’t fit with your society and can prevent transcending. I played passively and tried to avoid all confict, so it is nice that I did not have to start wars to defeat 10, 15, and then 20 units just to progress. The one downside is that it all becomes sort of background noise, so you might be caught by surprise when the game announces that it’s time for a new era. You do have to be careful when transcending eras with the same culture because you can miss out on combining perks for a bonus to Fame, which is necessary to win the game.

Humankind isn’t about “winning,” but what you do to get there. It is possible to end the game and still not win. Some of the end conditions include eliminating all the factions or sending a mission to Mars, and you can still lose by not having enough Fame. 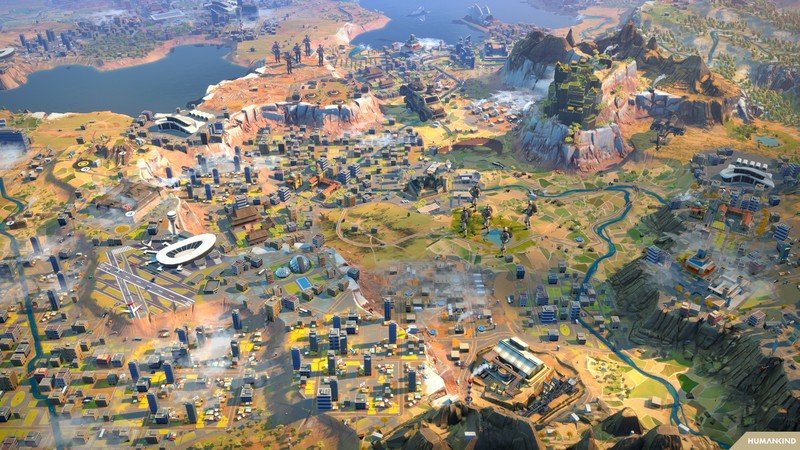 The game is sound mechanically, allowing you to control the whims of your districts through narrative events, various meters, and increasing all the numbers. The enemies lack personality though. There are a few historical figureheads like Edgar Allen Poe, but there is not enough feeling in these characters to resonate since everyone’s society is also a mashup of various civilizations. I stopped paying attention to the names of the other factions and only knew them by their color and how much of the map they had seized.

Since Humankind is about recreating an alternative evolution chain, the cutscenes that precede each era simply acknowledge that progress is happening. There is no real story other than its hook of remixing society. Also, I ran into what I assume is a bug where the first intro cutscene plays every time I continue my save after launching the game. I can easily skip it with the escape key, but it was odd nonetheless.

Blandness aside, Humankind is a great start to try out the historical-based strategy genre, as someone who has not significantly touched a Civilization since the pared-down Civilization Revolution made specifically for consoles. I was greeted by several videos explaining the goals and mechanics of the game upon setting up my first game, which was a nice surprise, and the tutorial menus would periodically reappear even after the beginning phase.

The popup menus were extremely helpful when forgetting certain actions, and there are a dozen tutorial options that can be toggled on and off in the settings. Also, there is a permanent button in the corner that offers an encyclopedia website that can be accessed at any time via QR code. Once I got the hang of it, the turns started ending faster and the hours were melting away. 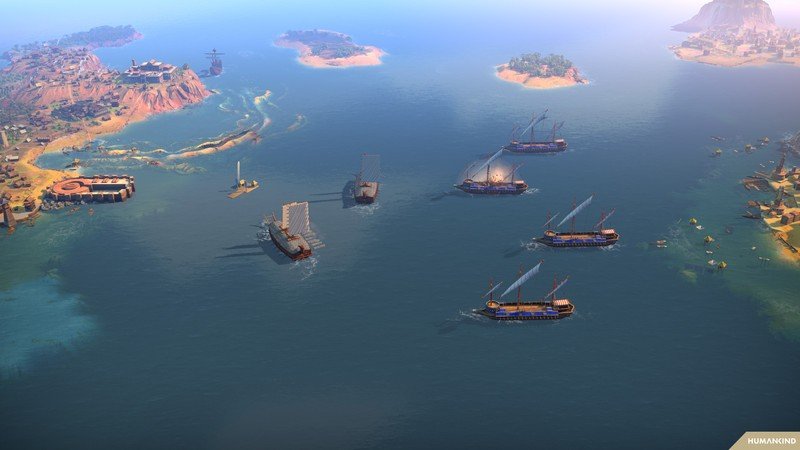 The Stadia version of Humankind offers two exclusive features not available on other PC platforms, though it comes with a few caveats. The game supports State Share, known here as “Leave Your Mark,” where other players can play in a recorded key event from your game world through a screenshot or video clip and compete against your challenges. Unless you have highly competitive friends also playing on Stadia, I highly doubt anyone would be seeking out random clips to play against.

The other Stadia exclusive feature is direct touch controls for mobile players. You can control the game with a series of tapping, holding, and swiping gestures rather than a touch gamepad overlay. The touch controls while playing on a Samsung Galaxy S20 FE worked well, but not enough to warrant long play sessions. There are a lot of small buttons and text in the game that become even smaller on a phone’s screen. There is also still a gamepad overlay, but it only contains the Stadia, Capture, and Google Assistant buttons, which block the resource management menu, where it is necessary to shift population around to increase food, industry, money, and science.

This is still a PC game meant to be played on a monitor with a mouse and keyboard.

There is a magnifying glass button on the bottom middle of the screen that will zoom in on the game itself to correct these issues, but it is still not ideal. It’s worth noting also that decreasing the scale of the UI on PC carries over to mobile and you will have to change it in the settings every time when switching between platforms or be annoyed by oversized/undersized menus. This is still a PC game meant to be played on a monitor with a mouse and keyboard.

The game does have online multiplayer for up to 10 players, but the Stadia version does not support cross-platform multiplayer with the Steam, Epic Games Store, and Microsoft Store versions. It may not mean much to those only looking at single-player but will affect those that want to play with friends without owning a capable gaming PC. 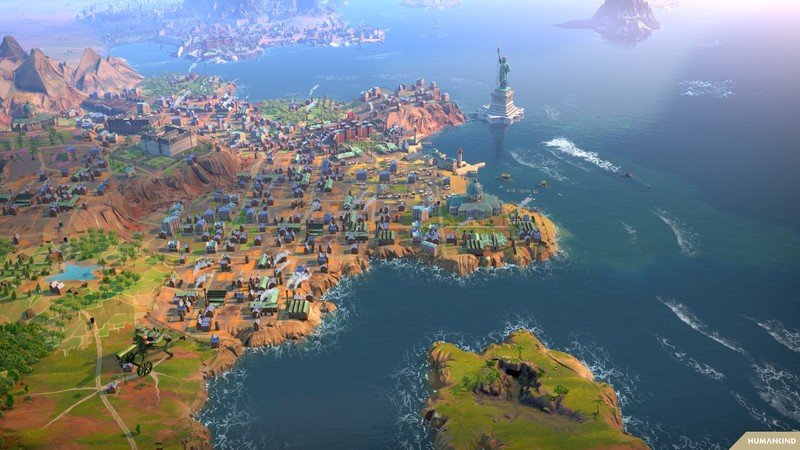 Although, single-player fans might be wary of the lack of mod support post-launch. Amplitude Studios has committed to supporting the game after launch with regular updates and content, but have said mod support for the Stadia version is “not something we can achieve on our own, so we cannot make any promises.” The game is fun enough as it stands, but no mod support can affect replay value for those looking to tinker outside of additional official content.

Humankind: Should you buy it? 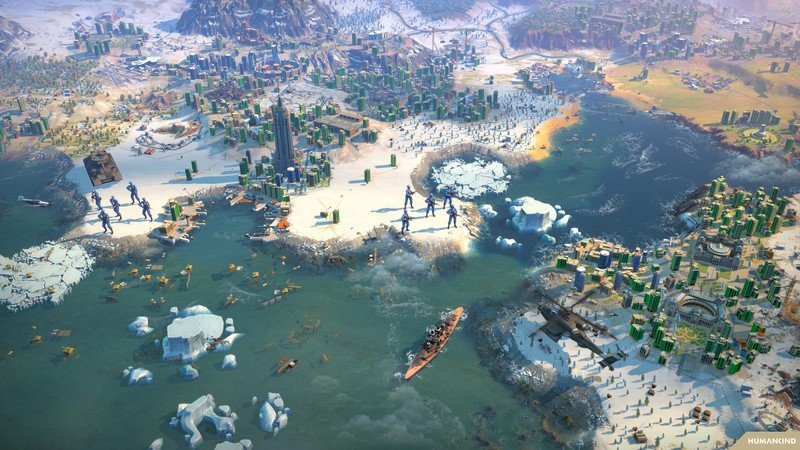 Humankind is a great start for players looking to try a 4X turn-based strategy game and those who want a fresh take on the historical theme in the genre. The game itself isn’t perfect but it has enough variety to warrant multiple sessions. Like Civilization, it is a game that is built for replay value with different scenarios and combinations each time.

The Stadia version, however, is a hard sell depending on what you expect out of the title post-launch. It runs beautifully on both PC and phone, but its exclusive features do not compare to the other versions. It is a gimped experience if you cannot play with friends on Steam and Epic Games Store or cannot install creative and wild mods to extend the life of the game. While it has some exclusive features, not even ones you’ll find on other Stadia games, they’re not all worth the price of admission.

Bottom line: The Stadia version of Humankind may not be as feature-rich as other PC versions, but provides a solid foundation for the historical strategy genre with a unique twist.