For many, Sapphire is the premier solution for PC gaming enthusiasts wanting aftermarket cards based on AMD GPUs. There’s good reason for this as the company consistently produces designs that excel in acoustics, temperature and looks.

Building on previous generations, Sapphire has revised the performance Nitro+ line for Radeon RX 6000 Series. It needs to be suitably impressive as the underlying MBA reference board, available to all partners, is a fine choice in its own right. 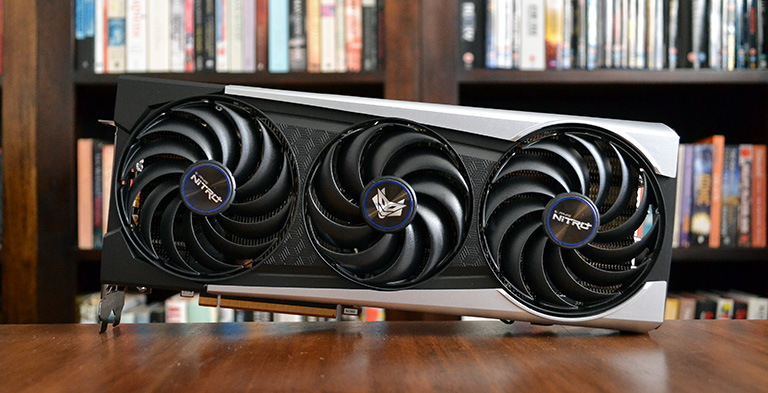 Slapping on the excellent RX 5700 Series Nitro+ cooler would have been the easy way. That’s not the case as the Radeon RX 6800 XT’s is new, though measuring 304mm long, 134mm high and 54mm tall, this 2.7-slot offering remains about the same size.

Key changes include new hybrid fan blades that, Sapphire says, increases airflow and air pressure compared to the last generation. Normalised to the same noise level, temperature is said to be reduced by 3°C. Not huge, but RX 5700 XT Nitro+ was pretty good to start with. As before, twin 100mm spinners surround a smaller 90mm fan in the middle, and the trio switches off at below 60°C or so. The switch-on is gradual and not as jarring as on some, and there’s not much to complain about in the coil whine department.

Build quality is decent throughout. The outer shell is plastic, unlike many of the competition who use metal shrouds, but its construction is a notch or two above what we usually see. The two-tone finish works well, too, and one can immediately determine that Sapphire has spent a solid amount of time and resource on kitting the card out. Tipping the scales at 1,232g also makes it lighter than many, and Sapphire says it has managed to reduce the cooler weight to just 775g, compared to a stout 1,000g+ on the similar-performing RX Vega 64 version. 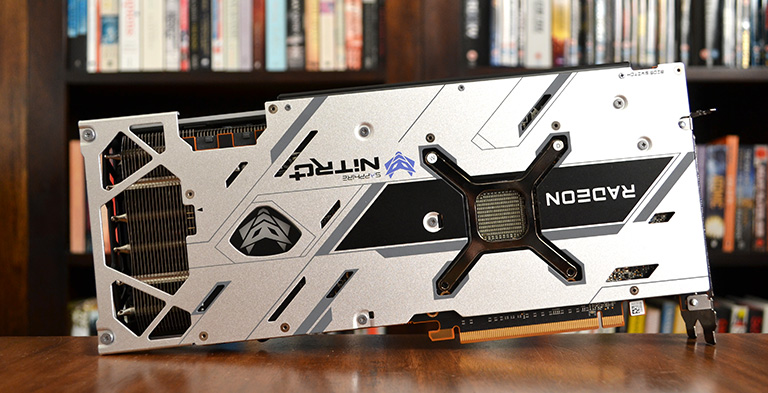 The rear, meanwhile, has a metal backplate imbued with generous cut-outs for through-the-board airflow. Similar to the 5700 XT version, there’s a lot going on here aesthetically, and we’d prefer a minimalist silver plate instead.

In between two sides is the new heatsink with a wave design with V-shaped fins. Total heatsink area is considerable, and Sapphire continues to use an integrated cooling module that concurrently pulls heat away from the memory, MOSFETs and chokes. A chunky heatsink covers the VRMs, too, and this Nitro+ has new, improved thermal pads between cooler and components. Every little helps. 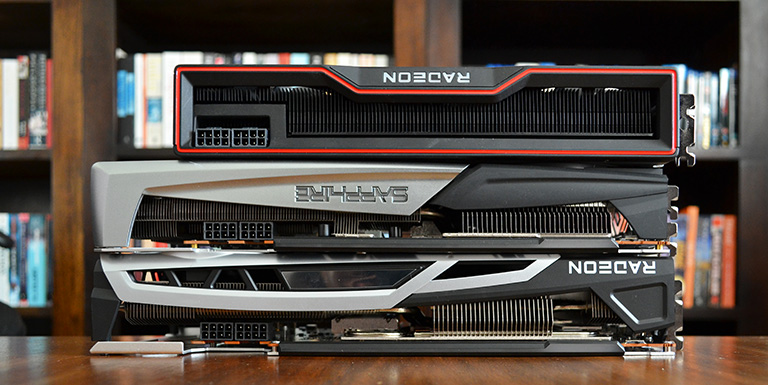 Nitro+ further has dual BIOSes that flit between default performance and quiet modes. Boost clock climbs from the reference’s 2,250MHz to 2,360MHz, with a real-world 2,410MHz in our testing. Impressive numbers from AMD’s latest design. Bear in mind that elevating speeds also causes the total board power to escalate by 50W to 350W, putting this card into RTX 3080/90 territory in more ways than one.

Quiet BIOS, meanwhile, employs a 2,285MHz boost which translates to 2,315MHz under load and what appears to be a 320W TDP. Memory remains at 16Gbps, which is a shame. It’s handy that a third position enables the user to toggle between the two modes via software.

Comparing cards, RX 6800 XT Nitro+ still looks much like the RX 5700 XT Nitro+ in the middle. Both are larger than the reference RX 6800 XT, but not totally overbearing unlike competitor three-slot offerings. The recessed dual 8-pin connectors are rotated so that cables are what we’d term the right way up for easier connection. 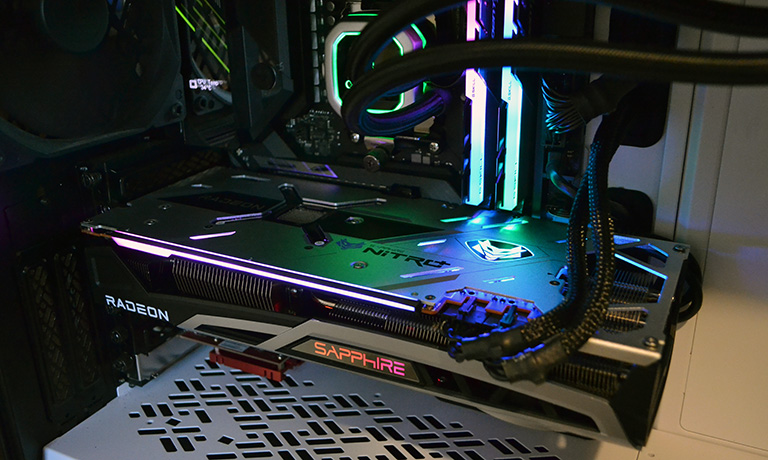 Installed in a system, RGB is located in three places – just under the rear backplate, the main Sapphire logo, and the Nitro+ branding on the rear – and the implementation, dubbed Nitro Glow, is pretty good. Controlled by TriXX utility, there are numerous effects that work well. Lighting synchronisation with the rest of the RGB brigade is possible via a 3-pin header on the card’s side.

Those wanting more illumination can opt for the Special Edition of this card featuring ARGB fans as standard. Both are recommended to be run with at least an 850W PSU.

The SE card also has different outputs to this standard Nitro+. It drops one of the three DisplayPorts and replaces it with USB Type-C, and we’d prefer Sapphire do that for all RX 6800/6900 GPUs

Sapphire attaches a £695 SEP to this Radeon RX 6800 XT Nitro+ while the Special Edition goes for £719. Good luck in finding cards in stock, so we believe Sapphire’s aim is to offer indicative pricing relevant to when supply is plentiful, which it clearly is not right now. Warranty is a standard two years.

Can it improve upon the larger PowerColor card featured a couple of days’ ago? Let’s find out.