I want to love this laptop, but it still needs a bit more refining. 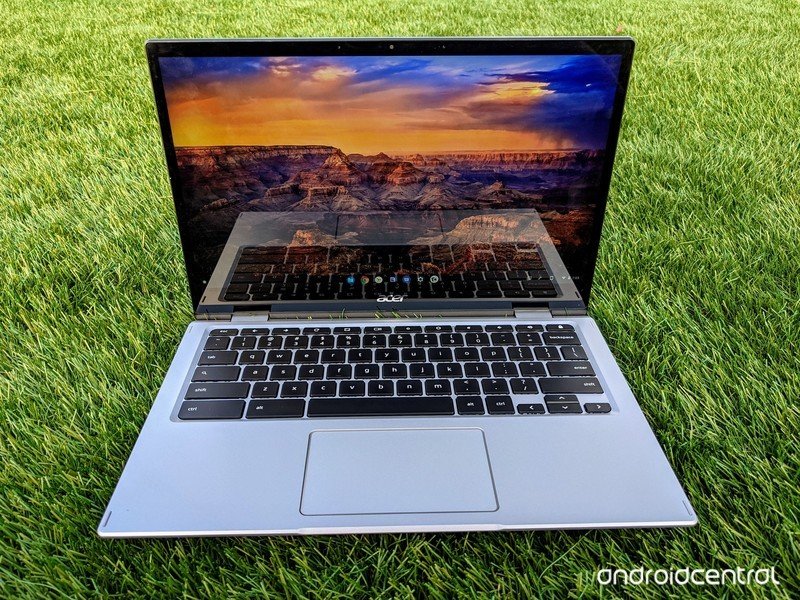 The processor diversity on the best Chromebooks has expanded nicely over the last year, with Ryzen processors arriving on the ThinkPad C13 and the Snapdragon 7c first announced for Chromebooks last October. We’ve been waiting on the Acer Chromebook Spin 513 for a solid six months now, with some questioning if the model had been canceled after the silent delays surrounding its release. 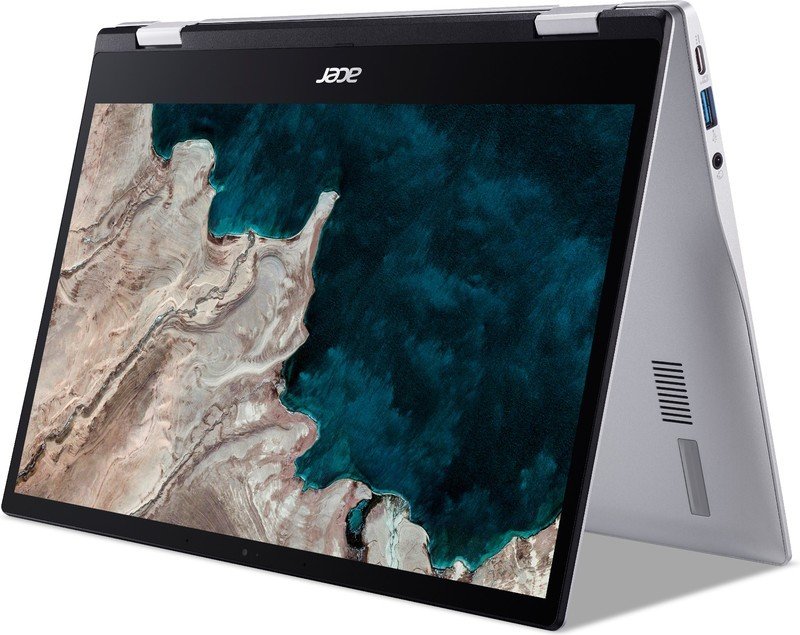 Bottom line: The first Chromebook with the Snapdragon 7c processor is a lightweight laptop in every sense of the word. While the battery will last you all day with ease and the screen looks good, the processor is a little lackluster, with Acer focusing more on efficiency than raw power. 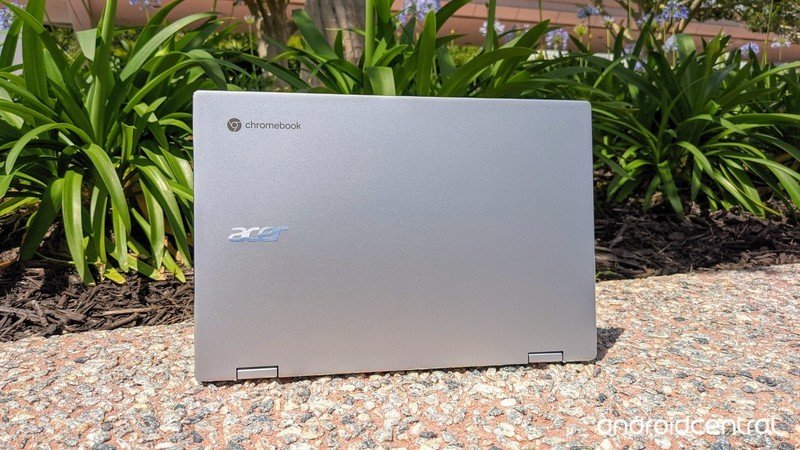 Right now, the Spin 513 is only available at Walmart, but it should be coming to more retailers — and more international markets — in the coming weeks and months. 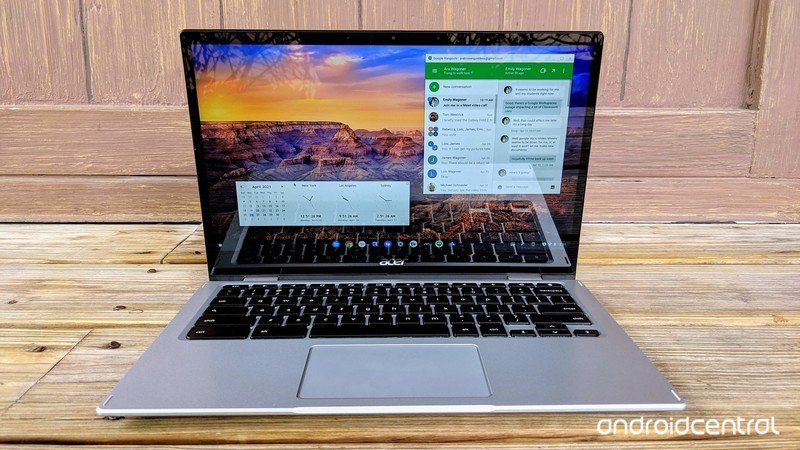 Acer’s been in the Chromebook business for a long time, and they’ve got the hardware and design down to a predictable science by now. As with the Acer Spin 311 (3H), Acer tapered the sides of the laptop while ditching ports they found extraneous, but we still get a USB-C port on each side, along with one USB-A port and a headphone jack. There’s no microSD slot on this Chromebook, but given that the base model starts with 64GB of storage, I’m not too disappointed to see it left out.

Once you open up the Spin 513, you’ll find a backlit keyboard, the same trackpad as the 311 — it’s smooth and responsive if a little small — and the 13.3-inch 1080p touchscreen. The screen is bright enough to use in the shade outdoors, but like most Chromebooks, it’s not bright enough to see comfortably in the sun. Inside, the screen is pretty good for reading, working, or the occasional three hours of FreeCell. It also has USI stylus support, meaning you’ll be able to use the best Chromebook styli with it for doodling or signing documents.

The backlight keyboard is a boon for working late into the evening, with the backlighting soft and even. The typing experience is just okay — nothing’s wrong with it, and there are no standout qualities to the way the keypresses feel under my fingertips — but it’s comfortable enough to bang out 3000 words a day whether I’m at my desk or curled up on the couch (where I am right now) or sitting in the Japan pavilion at EPCOT people-watching. 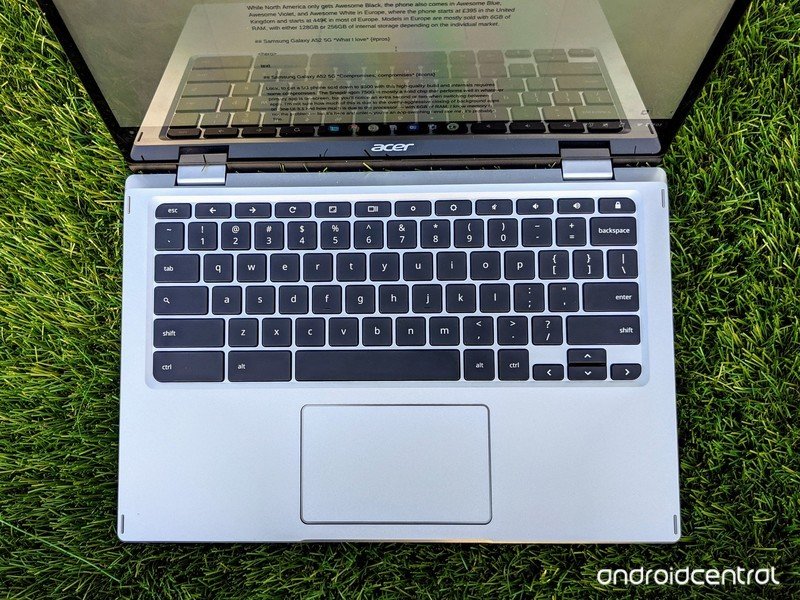 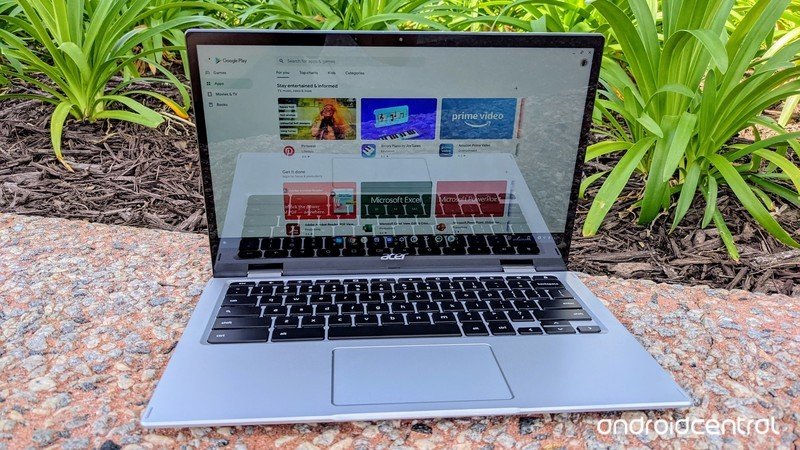 At 2.6 pounds, the Spin 513 isn’t the lightest Chromebook ever, but it’s easy enough to carry one-handed from the couch to the desk — or to haul around for eight hours in a backpack if you intend to grab this for school. You won’t need to haul around the charger every day, that’s for sure: even when I had screen brightness cranked up, I still had exemplary battery life during my two weeks with the Spin 513. I went almost two full workdays without charging the 513, and I can say that Acer isn’t just showboating with the 14-hour battery life claim: you’ll get pretty close, especially if you tend to keep your screen moderately low as I do.

Much of that battery life can be attributed to the Snapdragon 7c compute platform processor that Acer used here. Originally designed for budget Windows — and specifically, education laptops that needed 4G for kids without home internet — the 7c takes full advantage of Qualcomm’s ability to optimize for efficiency, which will be extra important for the LTE version of the Spin 513 coming out next month. I’ll update this review with the battery life of the LTE model once I can test it, but until then, the Wi-Fi version of the Spin 513 is a battery champ, but that isn’t to say that it’s a performance champ. 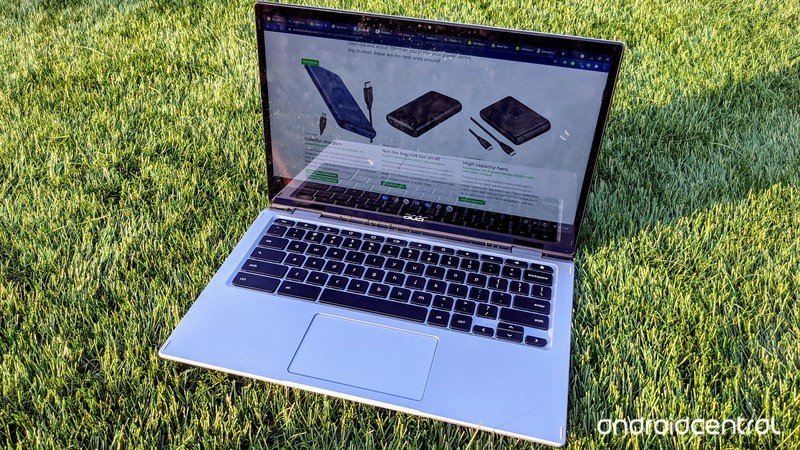 It’s always exciting to see new chipsets become available for Chromebooks, but it’s a process. A Chromebook launches with a new processor, there are some minor — or not so minor, in cases like the Pixel Slate and ASUS C436 — bugs that arise and are squashed within the first couple of Chrome OS updates as they’re discovered and reported by users.

Bugs can be fixed, but this lag is more than just bugs.

Thankfully, the Snapdragon 7c seems to fall on the minor side of the bug spectrum, with a few instances of lag and wonk that I’m mostly convinced are a result of Chrome OS still being optimized for the chipset. I’m mentioning it because early adopters might see a little bit of bugginess from the Spin 513 in the first few months, but I can all but guarantee that it’ll get fixed. 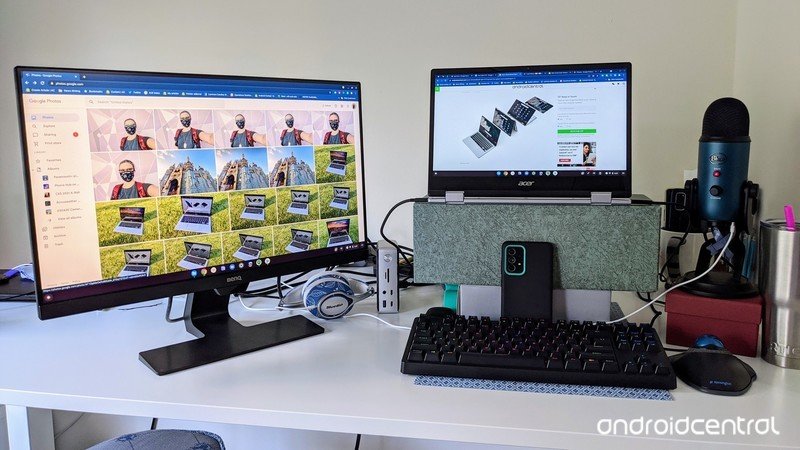 What won’t get fixed is that the 7c just isn’t powerful enough to run multiple monitors or windows without noticeable lag when swapping between tasks. Most users probably won’t be using a Chromebook with an external monitor — although there are some excellent reasons you should — but if you’re using a Chromebook to work from home (as I do), the Spin 513 might not cut it. Once I plugged into my BenQ monitor and booted up a Google Meet call on one screen while having notes and articles pulled up on the other, the Spin 513 got downright sluggish, with a noticeable delay in closing or opening new tabs.

Now, I’m under no illusions about the Snapdragon 7c trying to compete with Intel Core Chromebooks. The 7c is meant to compete with the Celeron and MediaTek Chromebooks that dominate the budget-end of the market, and it does that decently — or at least it will once Google finishes optimizing for it. But I know many of you are interested in this Chromebook for the processor, so I need to be blunt about its limitations: it’s a budget-minded processor that’s geared towards casual computing and battery efficiency, and it shows. 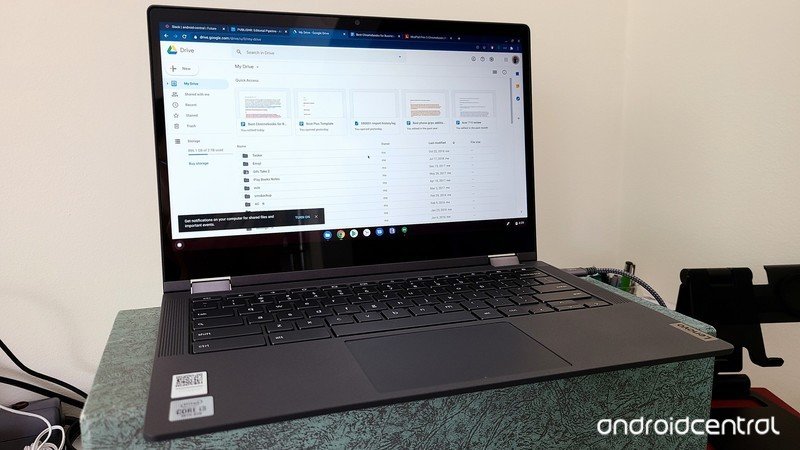 This Chromebook is designed to compete with Mediatek and Celeron Chromebooks like the Lenovo S340 and HP Chromebook 14 G6, with a few added comforts like the backlit keyboard, stylus support, and extended battery to help justify the extra cost. The bigger problem Acer has in convincing you to buy the Chromebook Spin 513 is that Intel Core-powered Chromebooks can be found for basically the same price and with most of the same features.

Case in point, the Lenovo Flex 5 has been out for roughly a year now and is still the leading champion of our best Chromebooks roundup because it offers an i3, a 2-in-1 touchscreen, backlit keyboard, and front-facing speakers all for $380-$400. There’s no 4G option like there is for the Spin 513, but for a workhorse Chromebook, that’s the better value unless you want a fanless Chromebook or you need a Chromebook that’ll easily go 11-13 hours between charges.

The 4G version of the Acer Chromebook Spin 513 has significantly less competition — 4G Chromebooks have been ridiculously rare the last three years — and if there’s anything Qualcomm knows how to do, it’s how to create a very efficient 4G system. The only other 4G Chromebook announced in 2020 is the Dell 3100, a two-year-old model that had a USB port taken out and a 4G modem shoved in. The Samsung Chromebook Plus V2 is one of the only other LTE Chromebooks on the market, and it still runs $600, and its battery life is less-than-stellar, so the Spin 513 will beat it hands-down.

In short, the Wi-Fi version of the Spin 513 might have trouble standing out in a crowded pack, but the 4G LTE model coming in the coming weeks will be a hot commodity.

Acer Chromebook Spin 513 Should you buy it? 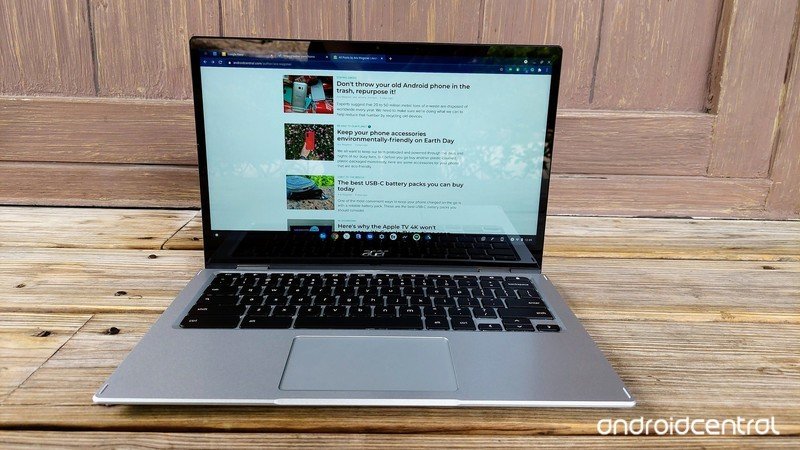 This is the first Snapdragon-powered Chromebook to hit the market, and I’m sure it will not be the last. Hopefully, we’ll even see Qualcomm and Google come together on a Snapdragon compute platform that’s geared specifically to Chrome OS and Google Assistant, but for now, the 7c Qualcomm does a decent job so long as you keep your tabs under control. The problem is, why would you settle for that when there are more reliable $400 Chromebooks with the same feature set out there right now.

If you still want to take a chance, the Acer Chromebook Spin 513 may not be the cheapest Chromebook on the market, but it’ll go literally all day, and it’s good enough for light work and general browsing while we wait for the bugs to get tamped down. The backlit keyboard, USI stylus support, and the durable build quality help bring the level of comfort we’d expect in a mid-range Chromebook while still keeping the price reasonable.

With all-day battery life, a decent touchscreen with stylus support, and the ultra-efficient Snapdragon 7c processor, the Acer Chromebook Spin 513 isn’t as powerful as we’d hoped it’d be. Still, it could do well in the budget segment with some price cuts and some further optimizations. The LTE version is also shaping up to be a compelling option, but beefy, this is not.