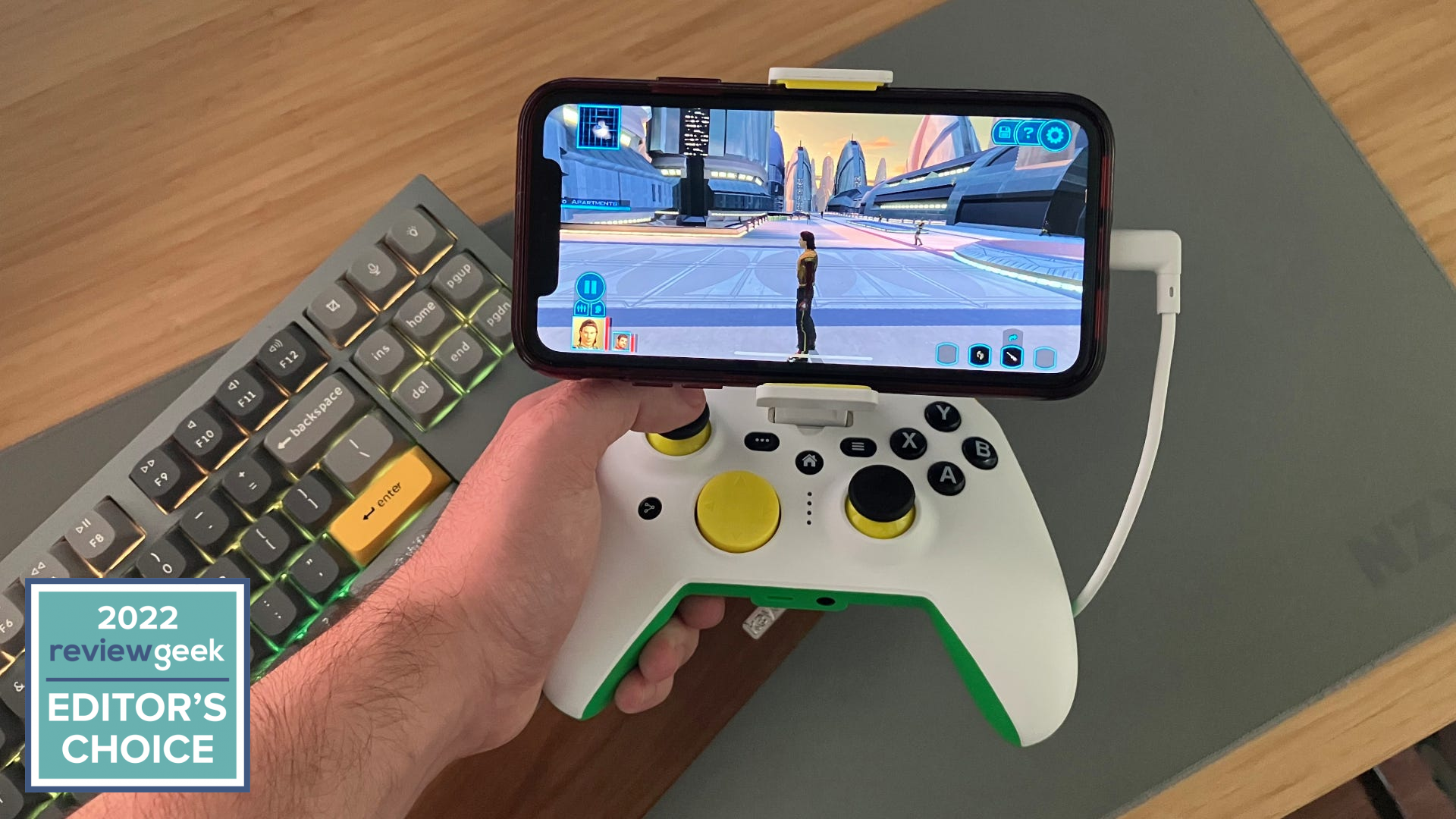 Nowadays, our smartphones are capable of running console-quality games—the only problem is dealing with touchscreen inputs. You either get a UI that takes up half of the screen or uncomfortable swipe controls. Enter RiotPWR’s ESL Controller for iOS; a definitive win to that lose-lose situation.

Mobile gaming is positively massive in today’s world, and it’s only growing in popularity. Now that smartphones can play console-quality games, touchscreen controls just aren’t enough. The ESL Controller from RiotPWR sets the bar high for competitors, but it’s not without a few flaws.

Build Quality: The Joy in Joysticks

Featuring an Xbox One controller design, RiotPWR helps you bring your console wherever you go. From the moment you pick up the ESL Controller, you can tell it’s of a much stronger build quality than the generic $15 gamepads you can find on Amazon.

The joysticks have a comfortable amount of resistance to them, allowing for quick micro-adjustments without feeling like cheap flimsy plastic. Expect a little less resistance here than on your usual Xbox controllers, but I definitely wouldn’t consider the joysticks a detriment.

Clicking the sticks down feels exactly the same as you’ve come to expect from Microsoft-brand Xbox controllers: tough with a tactile bump at the bottom. This is a refreshing departure from the weak, mushy joysticks found on many controllers that attempt to achieve the same haptic feel.

Wireless, sturdy, and extremely comfortable. The controller the gaming community knows and loves.

The A, B, X, and Y buttons, along with the 8-way D-Pad, are the same story as the joysticks: this is an Xbox controller that you can plug into your iPhone. Every time you push one of the buttons, you’ll hear and feel a light click signifying its activation. Four small buttons on the front of the controller allow you to access in-game menus and take screenshots without using the buttons on your phone.

Note: The RiotPWR ESL Controller is compatible with iPhones running iOS 7 or later with a Lightning port.

Moving back to the bumpers and triggers, they contrast in color, but not in quality. Both bumpers, which rest comfortably in index finger range when holding the controller, give a similar click to the joysticks. They never stick, springing right back up as you push them down, meaning multiple rapid bumper clicks is easy and consistent. 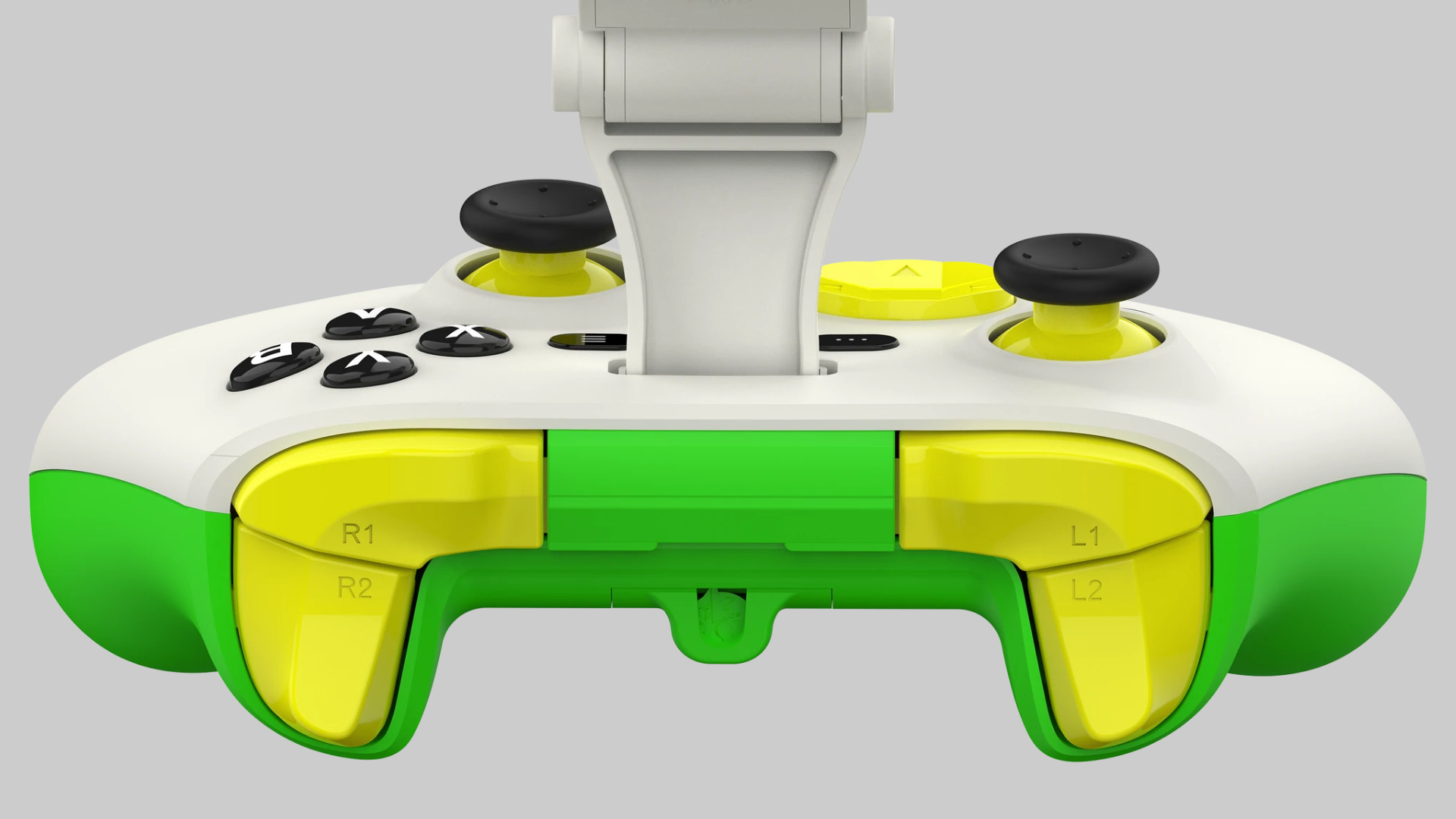 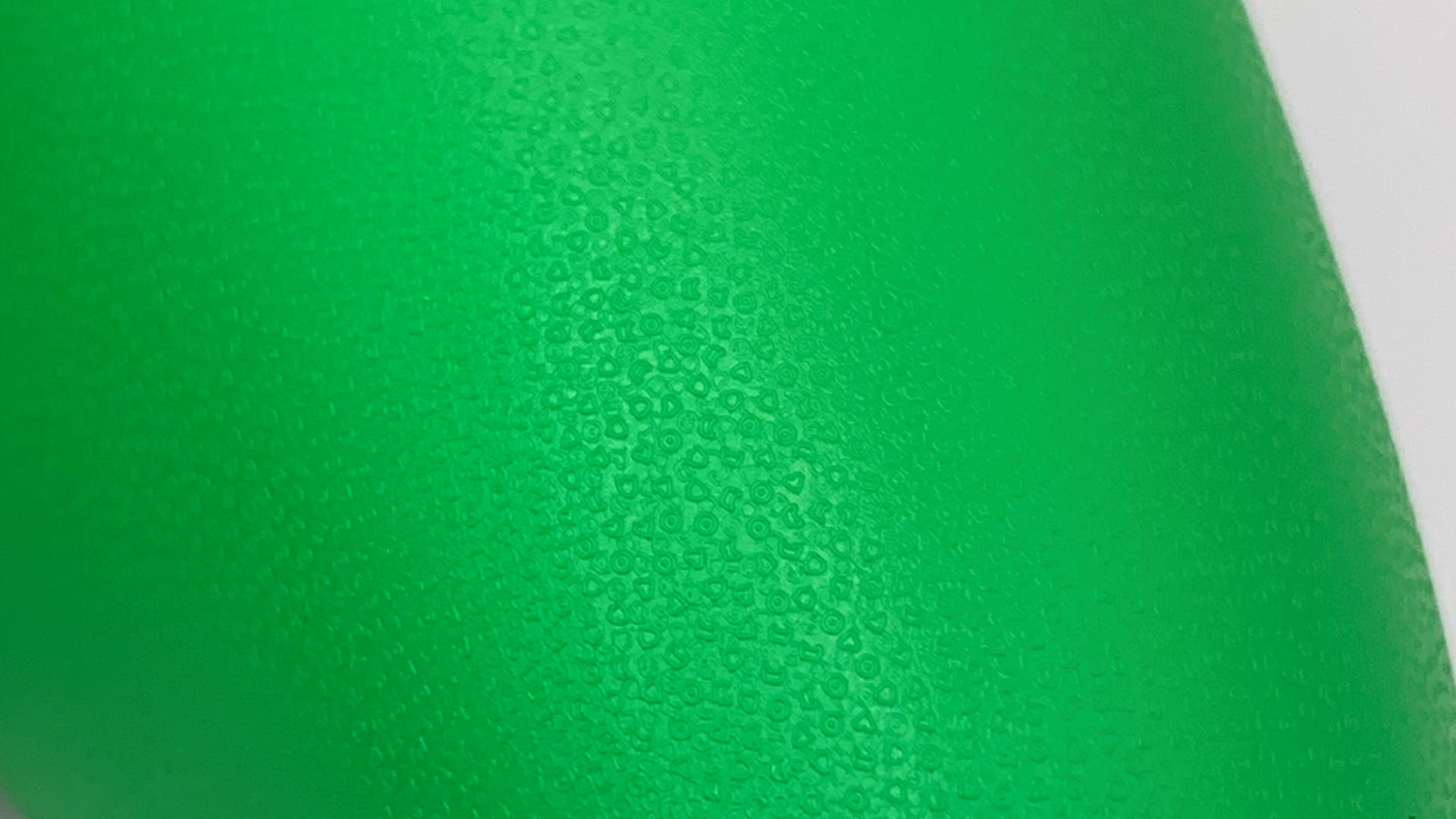 Now for the make or break of any controller: the triggers. While they’re of excellent build quality and brilliant for gaming, I’d like a bit more haptic feedback here. They’re stiff enough that you won’t press them by accident, but smooth enough that you won’t feel finger fatigue just from playing your favorite mobile game. Unlike the rest of the controller, though, there’s almost no haptic feedback when pushing them down—just an audible “clunk” as the triggers come back to their resting position.

On the bottom of the controller, you’ll find a port for passthrough charging to make sure your phone can play games for as long as you want to, along with a 3.5mm audio jack for headphones. The controller’s green undercarriage is beautifully textured with appropriately video game-themed knurling for better traction—be sure to clean your controller from time to time as dirt and other grime can make their way in every nook and cranny.

And now the most visually distinctive feature of the controller: the optional phone mount. I appreciate the ability to easily detach it from the controller simply by pulling it out, as well as the adjustable clip to fit phones of all sizes, even with cases. But that’s about where my appreciation ends for this particular piece.

The stand’s phone holder angle is adjustable, allowing you to maneuver your phone for better visibility. The stand itself, however, while detachable, is not adjustable at all. This means, that while you’re holding the controller to game, your phone screen blocks the A, B, X, and Y buttons, menu navigation buttons, left joystick, and both sets of bumpers and triggers. If you’re someone who needs to look down at the controller to orient yourself every once in a while, this is a major pain point.

But, if you’re like me and have the Xbox controller layout memorized like the back of your hand, this isn’t much of a problem at all. What is a problem no matter how well you know your controllers, though, are the viewing angles while gaming from certain positions.

When playing on a PC or console, you’re typically looking up at the screen in front of you and holding the controller somewhere near your lap or chest. The problem is, when the screen you’re playing on is attached to your controller, you’re craning your neck down to both hold the controller comfortably and see the action.

Unless this controller is made for gamers with extreme deltoid stamina who can hold a controller straight in front of them for an hour or more, I consider the available viewing angles (due to limited stand mobility) the biggest downside to the ESL Controller.

With that said, there’s nothing saying that you must use the stand. As long as the controller is plugged into your iPhone with the embedded and replaceable 2-foot cord, you’re free to set the phone propped up against something on a table in front of you. This isn’t usually a viable solution for travel, though, so you’re left having to use the stand while you’re out and about.

Plugging the ESL Controller in for the first time, you’ll receive a notification prompting you to install Ludu Mapp, a curated dashboard of controller-compatible mobile games. The concept is ingenious and saves you loads of time sifting through the App Store, and the app itself isn’t bad. The unfortunate reality, however, is some of your favorite games, including those that would make the most sense to play using a controller, won’t support controller play.

Don’t get me wrong, there are loads of games that give a console-like experience when played with the RiotPWR ESL Controller. Take Star Wars: Knights of the Old Republic, Minecraft, and Asphalt 9: Legends as examples. These titles, combined with the controller, make you appreciate living in the modern world of gaming. As long as you have an iPhone with hardware that can run them silky smooth, like an iPhone 13 Pro or third-generation iPhone SE, the games you like to play at home can follow you anywhere—as long as they’re controller-compatible.

Tip: If you’re considering a controller such as this to play a specific game or two, be sure to look them up on Ludu Mapp or the App Store before purchasing to make sure they’re controller-compatible.

Every time you plug your controller in, you’ll get a notification that mentions allowing RiotPWR to communicate with your controller. Pressing “Allow” takes you directly to Ludu Mapp, and pressing “Ignore” does nothing aside from getting rid of the notification; you won’t face any connection problems, and you won’t be taken to the app. Why this notification appears every time, I’m not sure, but I am sure that it’s a minor annoyance. 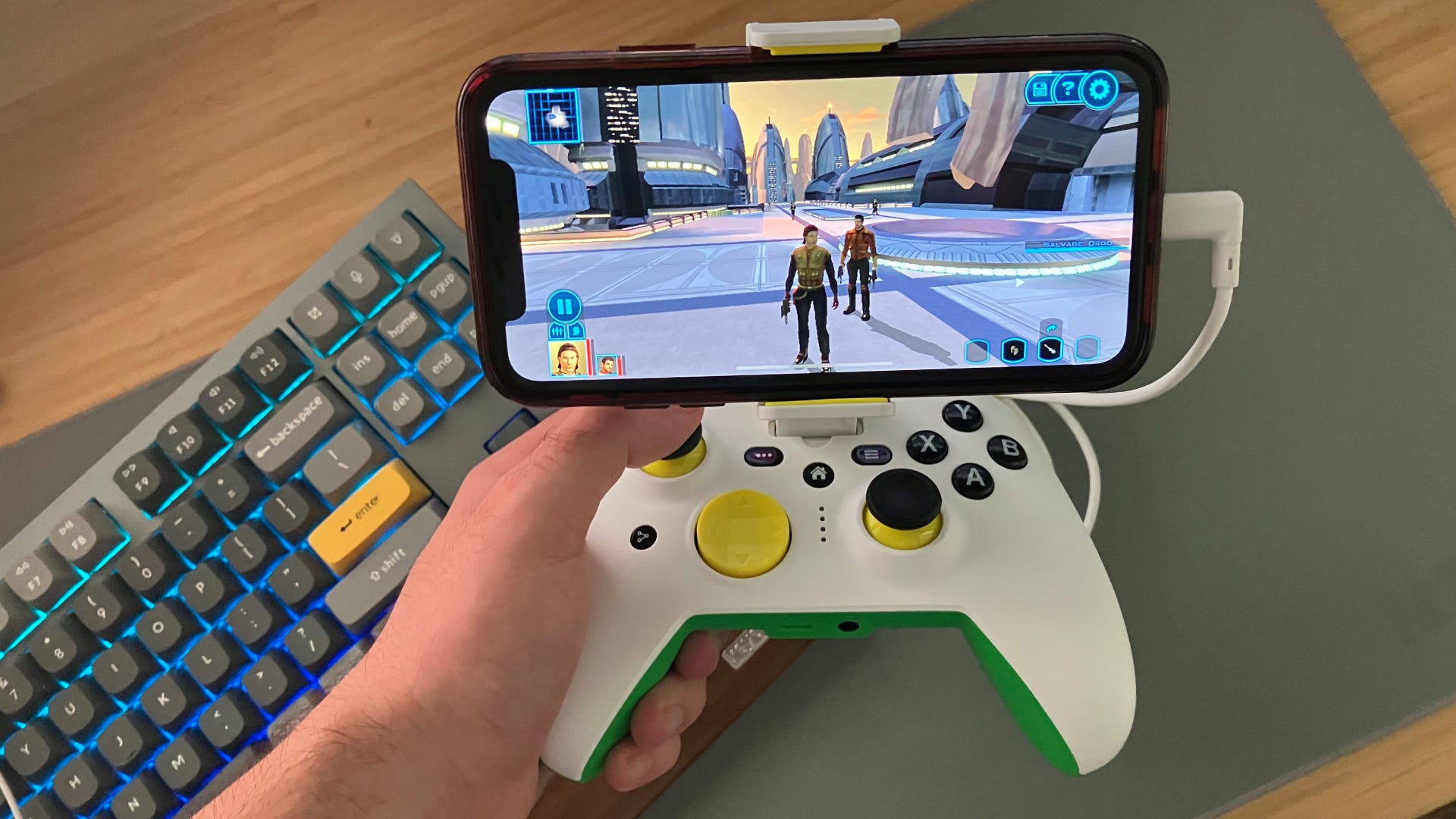 Into cloud gaming? Ready to sync up Steam Link or PS Remote Play with your phone and stream God of War from your PC or console? Go right ahead, the controller will work seamlessly (a few settings tweaks may be in order from game to game), but here’s the catch: the current latency with remote gaming is rough. Some titles are completely playable, others not at all.

I wouldn’t recommend anything competitive that requires lightning-fast reactions, like Rocket League or Dark Souls, but slower-paced single-player titles are great choices.

Should You Buy the RiotPWR ESL Gaming Controller?

There are other portable gaming controller options on the market, like the Backbone One; but if you’re looking for an Xbox controller layout to play your iOS games, the RiotPWR ESL Gaming Controller is an excellent choice. At $70, this controller meets prices for quality controllers across the board.

As long as you don’t mind your phone blocking buttons and having to remedy positional woes while you play, the ESL Controller is a worthwhile addition to any mobile gamer’s arsenal.