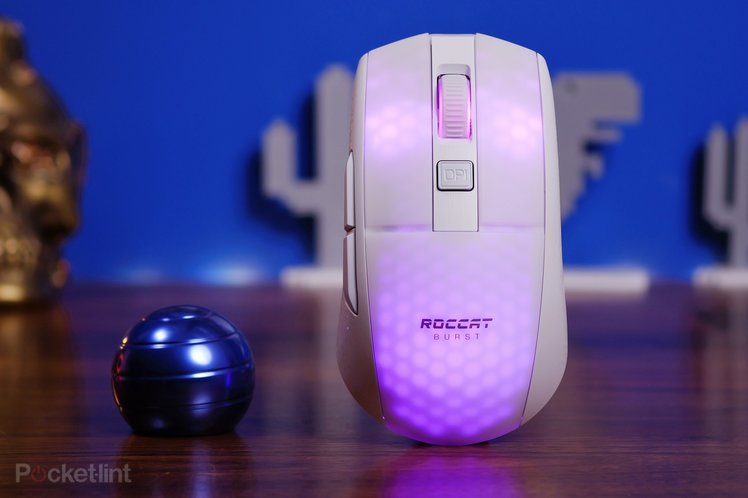 The Roccat Burst Pro Air is a lightweight gaming mouse that packs superb features into a compact frame – and all at a reasonable price, too.

With this mouse, Roccat has taken the wired Burst model and given it wireless capabilities.

It’s easy on the eye, but what’s it like to actually game with?

We’ve been playing and working with this one for a few weeks to bring you our thoughts.

There’s a lot to be said for wireless freedom. The Roccat Burst Pro Air offers that, giving users the option of gaming-grade 2.4GHz and Bluetooth 5.2 dual connectivity. The included dongle gives you a solid, low-latency connection to your gaming PC and responsiveness that you can trust. It’s Nvidia Reflex compatible, too, so you know it’s packing a high-quality sensor and low-latency capabilities.

Indeed, we found it perfectly reliable during our gaming sessions, with no lag or issues that caused us to miss a shot or feel frustrated. 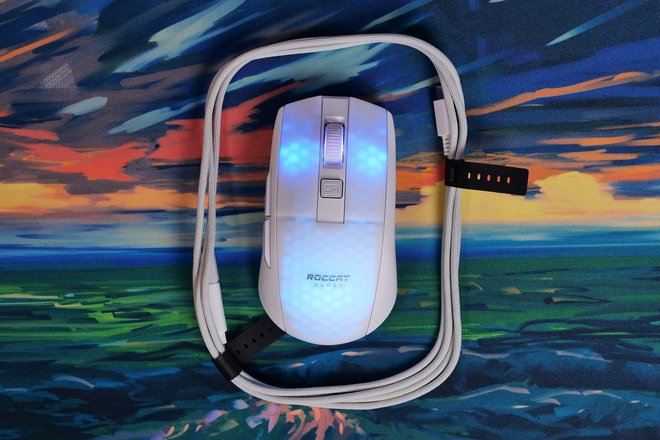 Roccat claims the Burst Pro Air has as much as 100 hours of battery life, though we’ve found it does fall short of that claim.

As ever with matters of battery life, however, it depends on how you use it. In this case, the brightness of the RGB lighting and the tweaks you make to the battery settings in Roccat’s Swarm software can help you eke out a bit more life.

That’s a small downside, but the good news is the mouse has rapid charging capabilities. So, when the juice is running low, you can get another five hours of power in just 10 minutes of being plugged in. The included Phantom Flex cable is perfectly flexible and floppy, as well, and doesn’t tug or nag while you’re gaming with it. 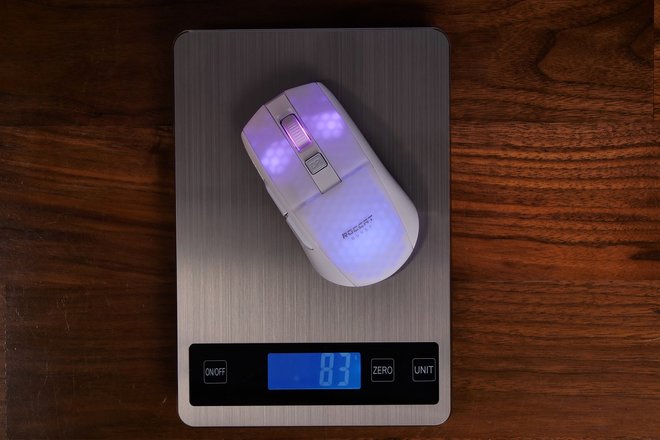 Reasonably lightweight for a wireless mouse

Like the other major gaming brands, Roccat is clearly keen on keeping mice lightweight. Thankfully, though, the company is doing it without compromising in other areas.

To help shed weight, the shell has holes in it, but, unlike other superlight mice we’ve tried, the Burst Pro Air doesn’t expose those holes to the air. Instead, it has a thin but durable ‘bionic’ shell that lets you see the holes but not feel them.

So, you certainly don’t need to worry about this mouse getting dusty, dirty or broken because things have gotten inside that shouldn’t have.

Still, wireless mice are a bit heavier than their wired counterparts thanks to the included battery and wireless transmitter buried within. We’ve used lighter mice before, but, at just a smidge over 80g, the Burst Pro Air is hardly heavyweight.

The other thing we like about this design is that the Bionic shell seems fairly dust and moisture resistant, too. We’ve been using the white model every day for hours on end, and there’s no sign of it getting dirty or tarnished by oils or sweat. It still looks as good as it did when it came out of the box. 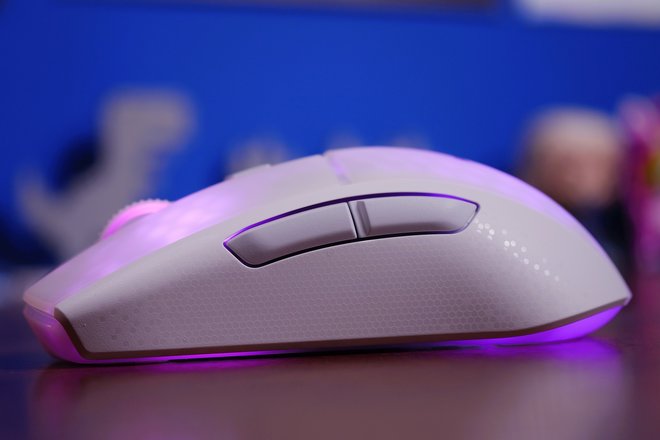 The Roccat Burst Pro Air is pitched as having a symmetrical shape, which implies it would work equally well for right or left-handed gamers. And it might, but the side buttons are on the left, so make of that what you will.

In terms of size, it’s far from the largest mouse we’ve tried, but it’s not the tiniest, either. We think claw grippers will find it a joy to use, and you’ll find it just as pleasant if you have small hands, too. For massive-handed gamers, however, we’d advise maybe looking elsewhere.

Still, even if it can’t accommodate every hand type, we have a lot of good things to say about the design.

The side buttons are nice and large, which is something we appreciate. The Burst Pro Air also uses the Titan Switch Optical setup, meaning you can rely on accurate actuation for up to 100 million clicks. The software even has de-bounce settings, so you can also tweak that if you’re worried about double-click issues being a problem in the future. 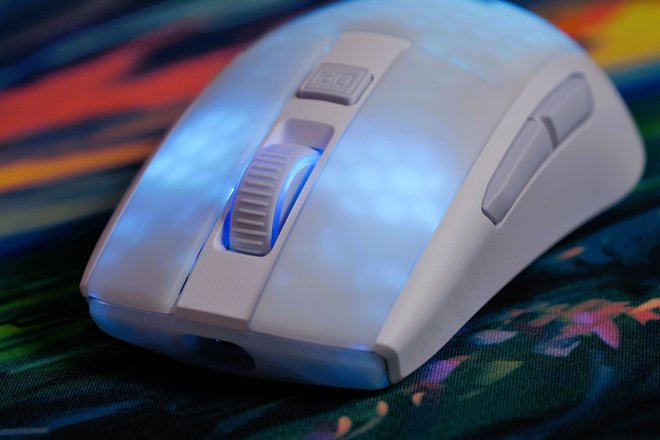 On the underside, meanwhile, sit two heat-treated pure PTFE glides. These are pleasantly slick skates that ensure that the mouse gets around easily on your mousemat. Those skates are also quiet and don’t suffer from any scratchiness, which is nice.

There’s a storage spot under there, as well, for the USB dongle to rest when it’s not in use, as well as a button to switch between mouse profiles. There are five onboard memory profiles that you can tweak and save to, and then you can easily switch between them using this button. Doing so also changes the colour of the RGB lighting briefly so you can see at-a-glance which profile you’re using.

On top of the mouse, there’s a DPI button, and you can use that to go between five different DPI levels which you can customise in the software all the way up to 19,000. We like the ability to change this so you can just have two or three levels if you prefer as well. 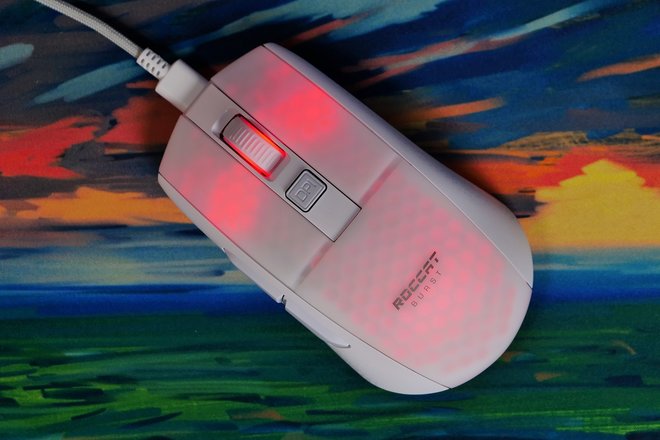 The Burst Pro Air has some nifty, somewhat understated, RGB lighting. There are four main lighting zones buried within the mouse – some on each of the main buttons, the mouse wheel and the rear, too. That lighting also shines subtly through the bionic frame and through the underside. It’s nicely diffused and pleasant, even if it has nothing on the great looks of the Roccat Kone XP.

The brightness, colours and effects can be adjusted in the software, and reducing the brightness – as we mentioned up top – helps save battery life. We like the various settings in terms of RGB. You can customise each zone individually or set the whole mouse to have effects. AIMO intelligent lighting is our favourite mode, though, with subtle lighting that organically changes throughout the day.

The Burst Pro Air is controllable via Roccat’s Swarm software. There are controls in there for all sorts of things – adjusting lift-off distance, tweaking debounce time, setting DPI levels and more.

One of our favourite things about Roccat products is the Easy-Shift settings which you can use to add extra actions to mouse and keyboard buttons.

There aren’t as many buttons here as there are on the company’s Kone XP, but you can still tweak these settings and more button actions if you wish.