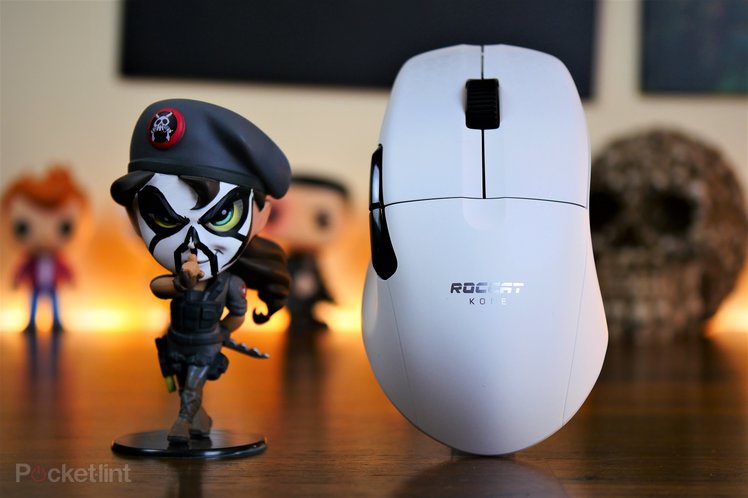 The Roccat Kone Pro Air is a wireless version of the Kone Pro. It’s an already great mouse made even better with the addition of wireless and Bluetooth connectivity.

Like its wired sibling, the Kone Pro Air tries to deliver lightweight gaming goodness without the holes that the latest line-up of super lightweight mice insist on featuring.

Instead, it uses a lightweight and thin shell that not only keeps it slick and easy to flick around, but also allows some of that fantastic RGB light bleed for added visual aesthetics.

Naturally being a wireless mouse, the Kone Pro Air is a touch heavier than its wired counterpart. Which is a bit ironic considering the name. Still, it’s intelligently designed with a thin-yet-stable and seemingly durable external housing that keeps dust away – but also lets the light shine through. 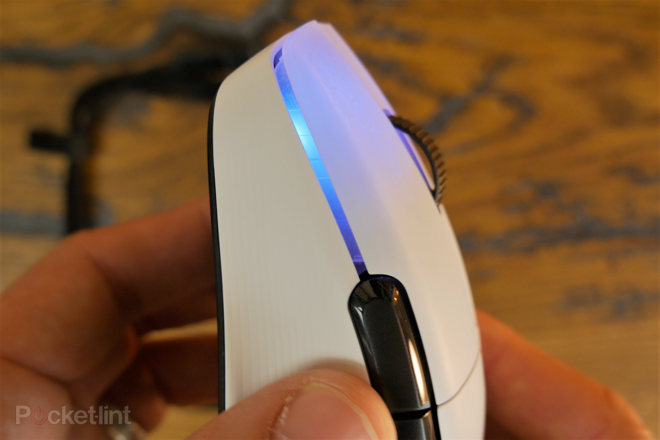 The Kone Pro Air is available in two colour variants: Ash Black or Arctic White. We tested the white version and think it looks the business with superb lines and that satisfying RGB lighting.

The RGB lighting is one of the things that helps the Kone Pro Air stand out from the crowd. That’s because Roccat has gone against the norm and put the lighting under the left and right buttons. The thin housing on the buttons and the honeycomb design under the outer shell lets the light shine through. There’s also a gap that runs around the edge and front of those buttons that lets more light out. We like this design because where the lighting is usually hidden by the palm of your hand, this mouse gives your fingers a colourful glow while you game instead.

The Kone Pro Air is ergonomically designed to fit comfortably in the hand. It’s a right-handed mouse, but one with a clever sloping style and a larger-than-average shape. This mouse will work with palm, claw and fingertip grip – but more importantly, it’s a great fit for larger hands. 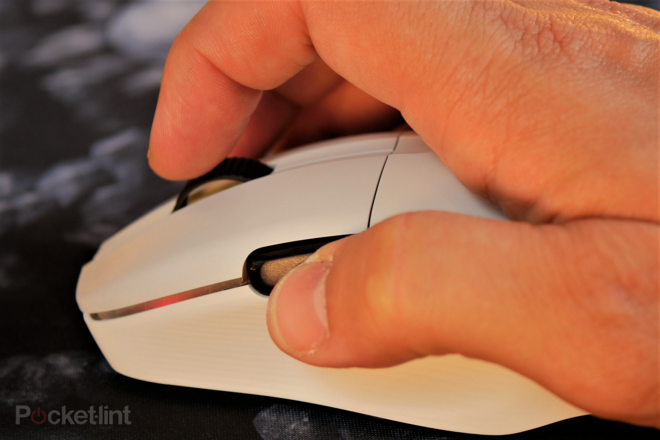 Outwardly the mouse looks quite slick. There’s a slight ridging on the left and right for grip, but you barely notice it when holding the mouse. It’s not as slick as it might appear though and is easy to hold onto, even when things get a bit fast and frantic in game. Oddly we found the wired version to be much less grippy.

Another highlight to the design is the large heat-treated PTFE glides on the underside. These Teflon feet allow for quick and easy movements when gaming and great response.

The mouse also boasts Roccat’s Titan Switch Optical that uses a light beam to track the click, ensuring better accuracy and a longer-lasting switch too. 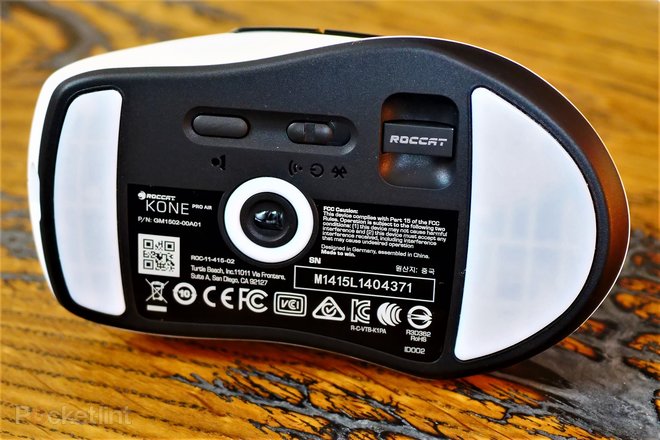 One thing we don’t like about the design of this mouse is the wheel. It’s milled from solid aluminium and coated in a textured material. It gives a strong feedback with each roll that verges on being a bit too noisy.

The Roccat Kone Pro Air takes the gamer-pleasing features of the Kone Pro and adds in wireless and Bluetooth connectivity too. 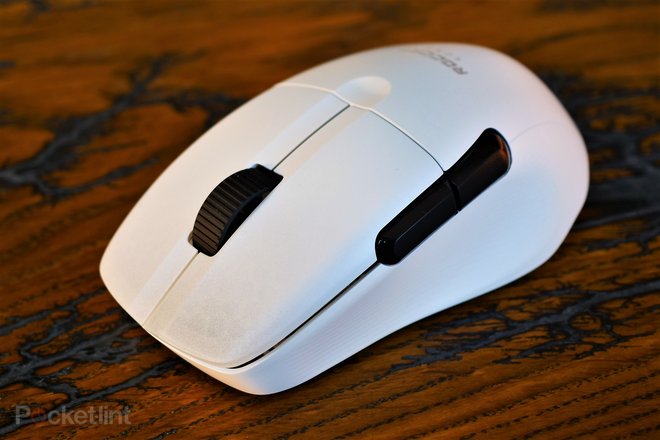 It not only boasts Roccat’s Owl-Eye sensor – capable of 19,000 DPI, meaning it’s super sensitive – but also a 1000Hz polling rate (the number of times per second the mouse ‘talks’ to your PC), adjustable lift-off distance, 50g acceleration (move the mouse fast and it’ll correspond on screen), and onboard memory too.

The highlight is naturally the option of 2.4Ghz wireless. That wireless connection also promises 100 hours of battery life, but that’s naturally going to depend on the RGB lighting and use-cases. Still, the Kone Pro Air has more tricks up its sleeve as it has rapid charging tech which gives you five hours of juice after just 10 minutes of plugging in.

One thing we did find is the wireless dongle needs a USB 3 port in order to pair and work with the mouse. Anything older and you won’t get a connection. So that won’t work for all. 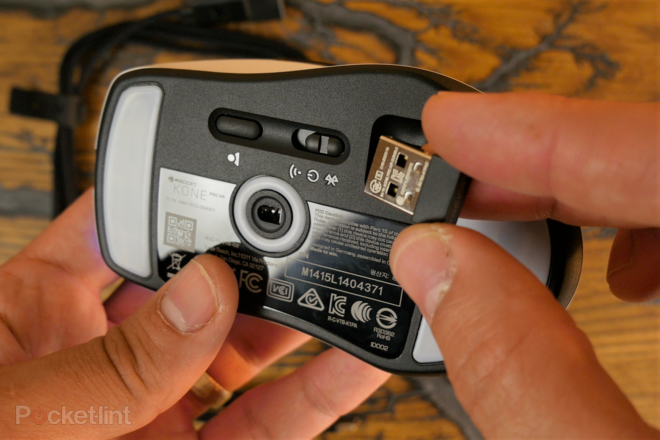 There’s a switch on the mouse’s underside that lets you flick between wireless and Bluetooth modes, giving you the option to connect it to more devices. Under there you also have a button to change profiles, so you can easily set up profiles within Roccat’s Swarm software that you can then change between on the fly.

One thing that’s lacking is a DPI button. There’s no easy way to change DPI unless you reprogramme some buttons in the software.

Roccat’s Swarm software gives you access to be able to tweak a number of settings on this mouse, including remapping buttons, adjusting DPI level, and changing the lighting.

One of the highlights here is Roccat’s Easy-Shift settings. These allow you to set a secondary action for any mouse button. All you need to do is first assign an Easy-Shift button that when depressed activates the secondary layer of actions. This basically doubles the number of available buttons and opens up more possibilities.

There are plenty of options for the buttons too. You can choose from a number of different actions from media playback to DPI adjustment, macros and more. One thing we like here is the ability to assign an Easy-Aim setting which drops the DPI to a specific low level for a more accurate aim in game.

You can create profiles that can be saved to the mouse as well, so have different settings for different games or activities and then change between them with ease.

Roccat’s AIMO intelligent lighting rounds off the package. Giving an organic lighting that changes depending on what you’re doing. You can choose to set different lighting effects in the software, but we really like how the AIMO lighting works and usually use this as the default.