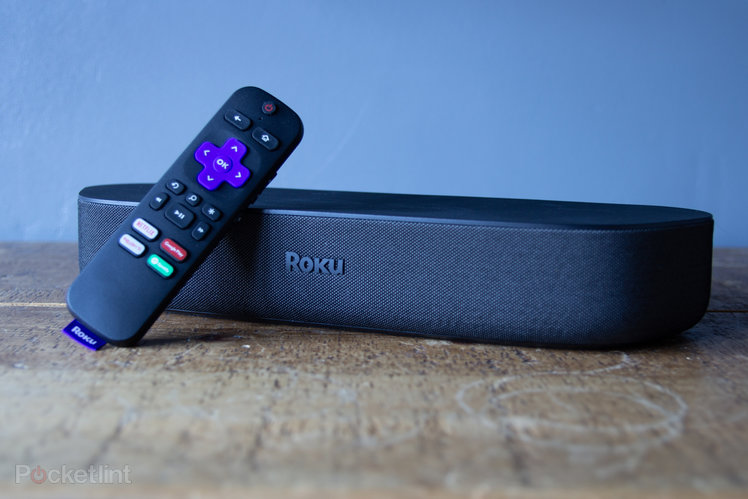 The Roku Streambar takes Roku’s popular streaming platform and fuses it with a compact soundbar. You can see how the company came up with the name – it’s hardly a huge leap in imagination.

But keeping things simple can pay dividends. The Streambar has the potential to be a great one-box upgrade, boosting audio while getting a TV connected, meaning you can really make the most from your content.

The Roku Streambar comes with all the connections you’ll need in the box, packaged with the familiar voice remote that you get with other Roku devices, as well as an HDMI cable, optical cable and the power pack. There are even batteries for the remote, so you literally need nothing else. 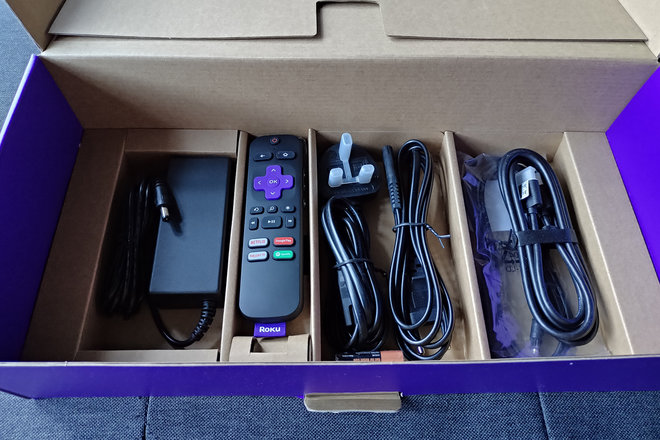 Setup is simple too, although there’s a lot going on. The Streambar aims to offer you audio not just from the streaming services that it provides, but for any other devices you might have connected to your TV.

To do this it supports HDMI ARC – audio return channel – and if your TV supports this standard, all you have to do is connect the HDMI cable to the ARC socket on your TV (it’s usually HDMI1), let the Streambar identify that ARC is enabled – and you’re done.

The optical cable provides a backup for TVs that don’t have ARC, so you can take the audio feed from the TV into the Streambar. For most TVs, that will be fine: connect all your devices to your TV and let that audio get passed back to the Roku Streambar to enjoy its speakers – this is how you’d boost the audio from the TV’s tuner, for example.

You might have to adjust your TV’s sound settings to tell it to use the optical output rather than its own speakers, but after that, everything should work fine. 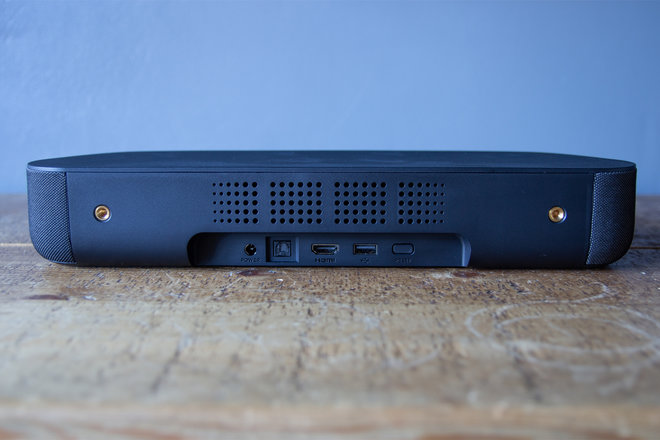 Aside from the physical connections, the Roku will ask to be connected to a Wi-Fi network. Although it offers wired and wireless in the settings, there’s no Ethernet port on the Streambar, so you’ll have to use the wireless options. If you want a wired connection you’ll have to connect the USB to an Ethernet adapter – which you’ll have to buy separately.

We had no problem with connections and found wireless connectivity to be as solid as other Roku wireless devices we’ve used in the past, fine for streaming 4K content.

A Roku steamer, as you know it

Roku’s platform is essentially the same across all its devices – and it’s one of the most complete offerings out there. It offers the big hitters – Netflix, Amazon Video, Disney+, YouTube – but goes further offering the likes of Apple TV+, Google Play Movies, and many smaller channels too.

For those in the UK, the Roku platform supports all the UK catch-up channels, making it one of the best options if you want to start streaming on your TV. Some of these channels are free, most require some sort of subscription, and pretty much all require some sort of login. 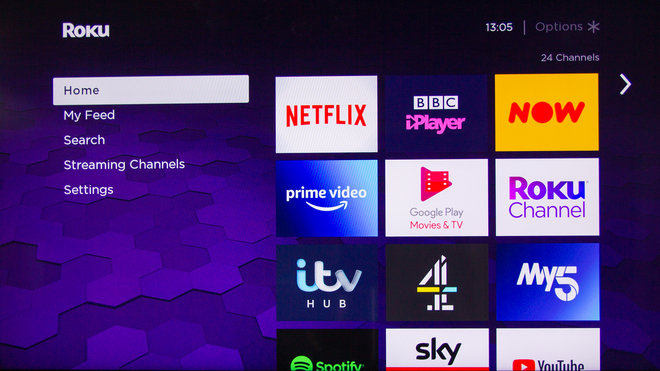 That’s perhaps the biggest part of setup of the Roku Streambar. Once you’ve been through the physical setup and the bar has detected the TV type that you’ve connected it to, you have the option to select some additional channels you might want to add. These can always be adjusted later and it’s easy to add new services as and when you subscribe.

Setup of the individual streaming services themselves depends on the process put in place by the provider. There’s no one-stop route, you’ll have to sign into each individually via whatever method is offered. Some, like Netflix, is password entry via the on-screen keyboard, others offer shortcuts and PIN codes, like Amazon and Spotify. Hopefully, however, you’ll only have to do this once to get access to all your services.

Roku doesn’t force recommendation or suggestions on you, it’s mainly a grid-based interface on the home screen where you can open up the service you want and get back to watching. 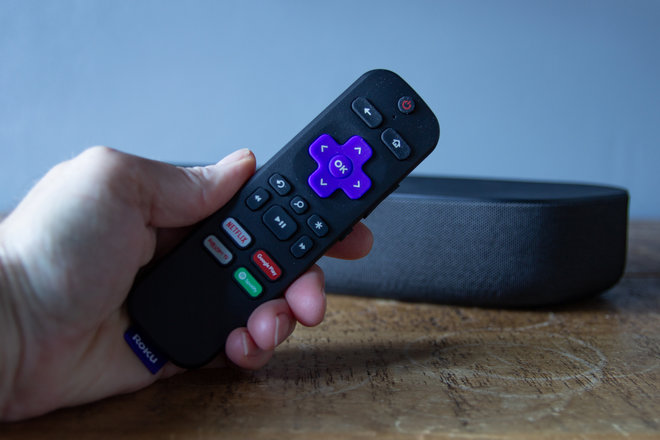 You’re not just limited to control through the bar itself and the remote – you can use the app on your phone, while there’s also support for Bluetooth, AirPlay, Spotify Connect, and Google Cast, so it’s really easy to get content from any device you might have onto your TV.

You can also use the Roku app on your smartphone for “private listening“. This will let you route the audio through to your phone, so you can watch on TV and then listen with headphones – great for watching TV at night in the bedroom when your partner is asleep.

Inside the Roku Streambar there are four full-range drivers. Two point directly forward and two are positioned on the ends, angled to widen the sound stage and to spread the audio around – and to a greater degree than you might expect.

It’s a fairly typical arrangement, allowing the centre channel for voice, while the left and right drivers can provide separation and some nod towards surround sound. Of course it can’t compete with a larger soundbar or a bigger 5.1 surround system, as the sound field is still a little narrow – but that’s no surprise given the size of the bar. 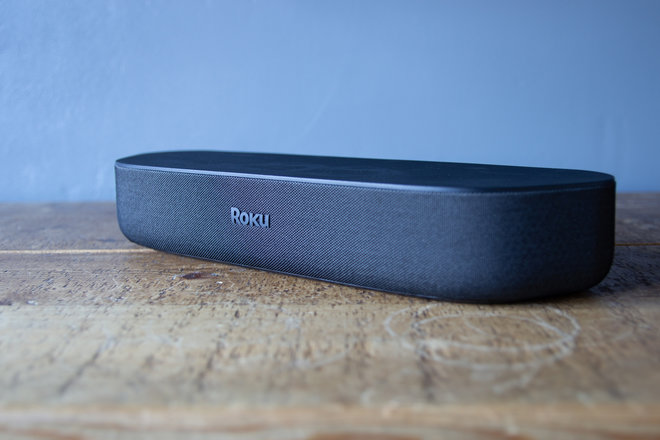 That needs to be considered, because this is really a solution that you’d use to boost a smaller TV, perhaps as a one-box solution in a dorm room or bedroom, rather than providing a huge boost as a home cinema solution. That said, hooking up the Streambar in our living room, we found the volume and bass sufficient to provide a boost over TV audio and fill the room with sound.

The bass is important here, because that’s one of the things that’s often missing from a TV’s built-in speakers. The Roku Streambar does away with that tinny TV sound, providing richer and fuller sound no matter the source. That makes it better for movies and music, but obviously won’t replace a dedicated subwoofer.

That might become a little more obvious when you’re listening to music where you want a solid bassline, and while some movie soundtracks benefit from big bass, a lot of TV is just fine with the smaller boost the Streambar offers. 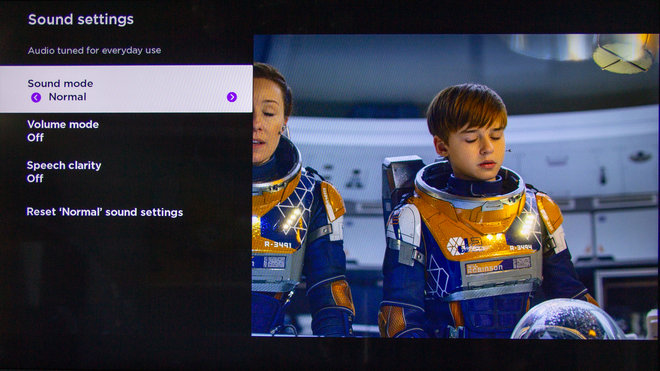 While there’s no detailed equliser (EQ) adjustment, you can customise the sound with the ability to reduce or raise the bass levels, or boost the voice output. These are great options for improving the quality to make sure you can hear what you want, or perhaps adjust the sound so that it doesn’t disturb your neighbours at night.

As such the Streambar fits into its position well, providing good sound for the price and providing that important boost. There will be many who will take the Streambar on its own as an upgrade to a TV and be perfectly happy.

On the vision front we found the content to be crisp and sharp, with little buffering. The experience matches that which we’ve experienced on other Roku streaming devices previously. There’s support for 4K HDR – the device detecting the type of TV you’ve connected it to – but there’s no support for Dolby Vision, if you happen to have that on your TV. 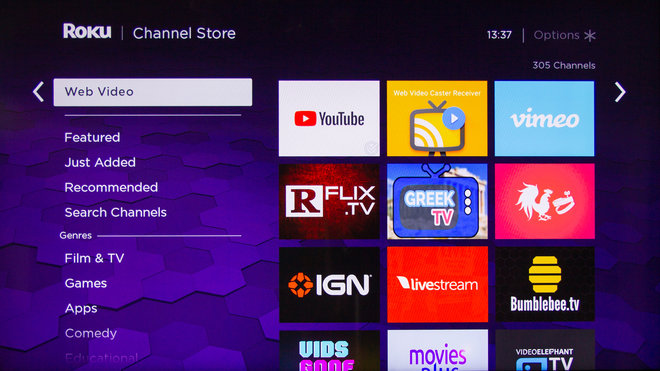 That’s something to be aware of rather than a huge omission. And we suspect that for those looking for this sort of simple solution will lack a Dolby Vision capable panel anyway.