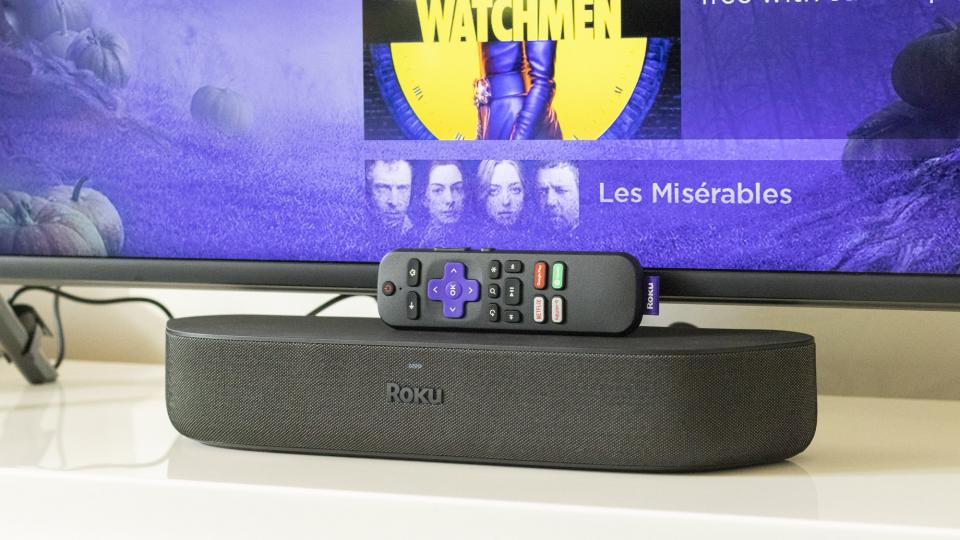 The Roku Streambar, as you’ll find out if you read the review below, is a fantastic soundbar. Not only does it sound great but it also doubles up as a streaming stick, bringing all the best streaming services to your TV in one neat little box.AmazonWas £130Now £99Buy Now

An all-in-one soundbar and streaming stick might sound like a bit of a niche product but, for those without either in their home, the Streambar might well be the perfect solution.

Roku Streambar review: What you need to know

With the Streambar, Roku has taken a compact yet powerful quad-driver stereo soundbar with Dolby audio decoding and combined it with its top-end streamer, the Roku Streaming Stick+.

Once connected via HDMI or optical to your TV, the Streambar handles all your TV’s audio just as any other soundbar would. But it also gives you access to Roku OS, arguably the best streaming platform there is. Like the Roku Streaming Stick+, the Streambar is capable of 4K HDR playback at 60fps. 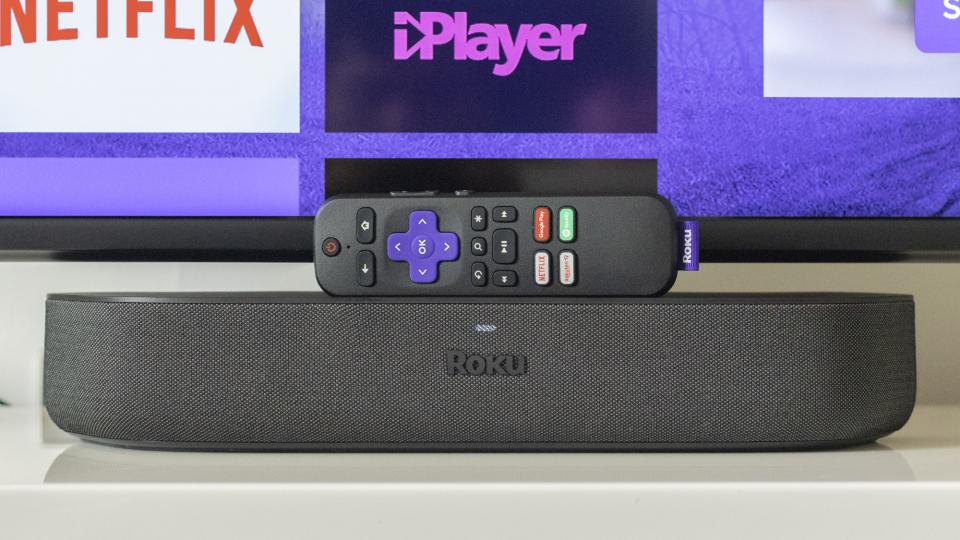 The Streambar also has support for Bluetooth, so you can connect your external devices to listen to music, podcasts and more.

This all comes packaged with a neat remote that controls both streaming OS and soundbar functions and includes a voice search function that makes launching apps and finding content an absolute breeze.

You can buy the Roku Streambar for £130 right now from various UK retailers including Amazon and Argos. For a soundbar-streamer combo that’s not a bad deal at all. The Roku Streaming Stick+ costs £50 by itself so with the Roku Streambar you’re essentially getting a decent budget soundbar for only £80, although those savings are cancelled out if you already have a 4K streamer. Clearly, it’s a better bargain if you’re in need of both a streamer and a soundbar.

The Streambar is an unusual product but it’s not unique. The Anker Nebula Fire TV soundbar offers a similar all-in-one package to the Streambar, with 4K HDR streaming via Amazon’s Fire TV OS at £180. It’s pricier, yes, but it also supports HDR10+ and Dolby Vision, dynamic HDR formats that are absent from the Streambar. And instead of a basic stereo configuration, the Nebula delivers 2.1-channel audio.

Of course, you don’t need a combo device to get great streaming and sound in your living room simultaneously. Rather than buying a 2-in-1 device, you could simply combine a £50 Roku Streaming Stick+ with the Creative Stage 2.1 soundbar, a phenomenal budget option that only costs around £80. Tally those up and it costs the same as a Roku Streambar.

If space is at a premium the Streambar is ideal. It’s as compact a soundbar as you can buy, measuring 356 x 107 x 70mm, and about the size of a mid-sized Bluetooth speaker. It’s small enough that it should fit neatly in front of most TVs without jutting up and obscuring the picture and, for TVs with feet at either end like mine, it may also be short enough to slide right underneath. 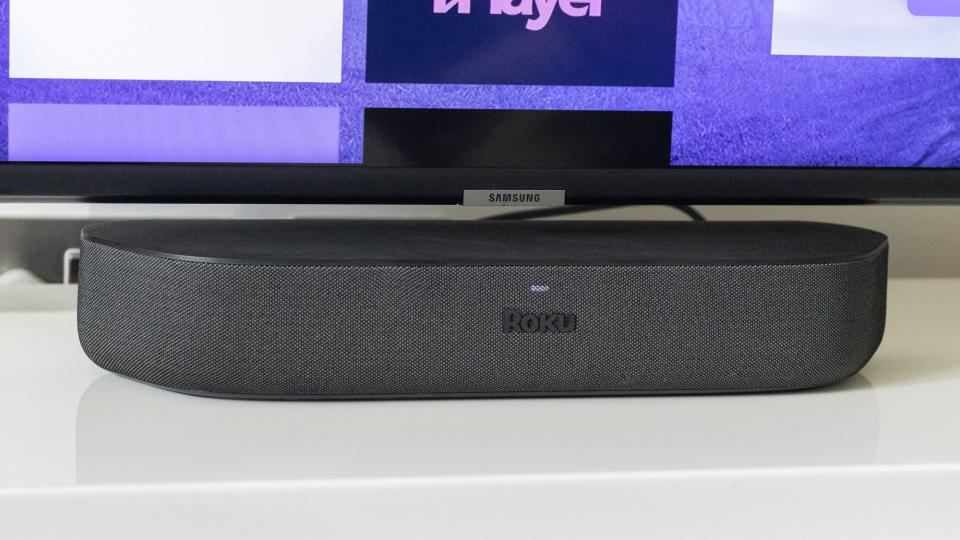 The main body of the Streambar is made from sturdy plastic finished in matte black, and it has a rubberised base that keeps it firmly in place. The speaker grilles are wrapped in a grey mesh fabric that wraps around the entire face of the Streambar and in the centre is a discreet black Roku logo with an LED status light above it.

All the ports are located at the rear. There’s a power port, an optical input, an HDMI 2.0a ARC (audio return channel) input and a USB Type-A slot and, to the right of those, a reset button. The box contains every cable you’ll need to get started. 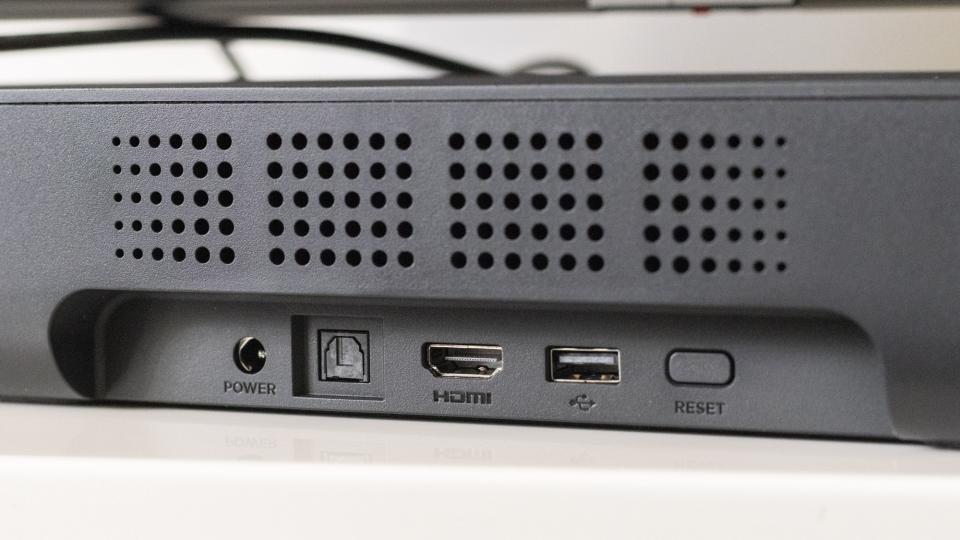 Roku boasts that the Streambar can produce powerful cinematic sound with Dolby Audio, but that’s obviously limited to Dolby Digital. You won’t get object-based Dolby Atmos support and there’s no coverage for DTS formats, either. The lack of an Ethernet jack is also a shame, as it’s always handy to have if you’ve got a dodgy signal.

Roku Streambar review: Setting it up

Once you’ve plugged it into a mains socket, simply connect the Streambar to your TV through an HDMI input that supports ARC. If you own an older TV that doesn’t have this, you can just use the optical cable instead. From this point, all your TV’s audio should be passed through the Streambar instead of its built-in speakers.

Switch over to the corresponding HDMI source on your TV and the Roku OS startup process begins.

You’ll have to connect the Streambar to your Wi-Fi (for Ethernet connections you’ll need a USB adapter), then wait for the software updates to complete and, lastly, create a Roku account if you don’t have one already.

This all took me less than ten minutes to complete, after which you’re launched straight into the intuitive Roku streaming platform, which I’ll cover further down.

First, though, let’s look at the sound quality. Although the Streambar only has stereo channels, Roku states that it performs like a 3.0 soundbar (despite not having a physical central channel) due to “multi-channel decode capabilities”.

The Steambar has four 1.9in drivers, two of them front-facing and two side-facing, and these absolutely deliver on Roku’s promise of room-filling sound. For such a compact device, this thing gets really loud and, unless your living room is a cavern – or you want your neighbours to call the police – you won’t want the volume too much higher than halfway.

Watching movies and TV shows with the Roku Streambar instead of my TV’s tinny speakers makes a world of difference. It’s a full-bodied wall of sound with a lot of power behind it, so car chases and shootouts feel far more lively than they did before and the soundscape is big enough that you sometimes forget it’s coming from such a small box under your screen.

The bass lacks the kick of rival soundbars with dedicated subwoofers, which should come as no surprise. Nevertheless, you still get a satisfyingly deep, impactful rumble from explosions and sound effects.

Dialogue separation is good, too, despite the Streambar’s bare-bones channel configuration. In mumble-heavy films like Zodiac and The Road, subtitles were no longer required in order to follow the plot, while heated verbal exchanges in The Boys remained easy to pick out, even during the more action-packed sequences. 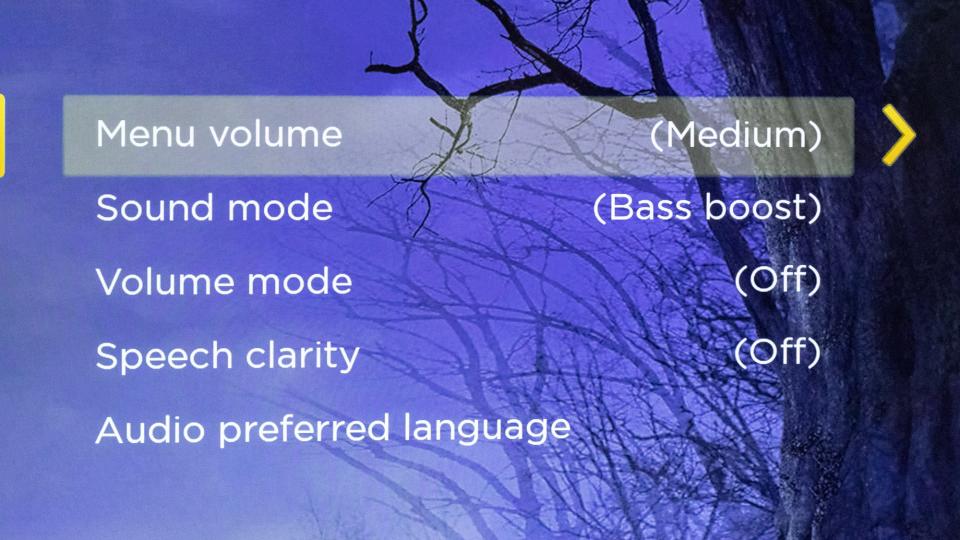 If the default sound profile isn’t to your liking, Roku offers a number of sound presets in the Roku OS’ audio menu. “Dialogue Enhancement” mode boosts the volume and clarity of speech but I found this made everything sound far too bright and it adds in a lot of noise, especially in outdoor scenes where weather is a factor.

The “Bass Boosted” mode is good value for movies like Mad Max: Fury Road and Inception (the BRAAM! sound) but it can drown out the subtleties of a soundtrack so it’s definitely not ideal for music playback.

The Streambar is a solid investment for gamers, too. That wide soundstage brings a level of depth that you just won’t get from your TV’s speakers. Playing Doom Eternal, the left and right drivers helped me locate incoming enemies faster because I could actually hear which side they were coming from, and environmental sounds took on more depth and detail than before as well.

Roku’s operating system looks the same on the Streambar as it does on other Roku devices such as the Roku Express and Streaming Stick+, albeit with a couple of audio-centric additions. And, as with those devices, Roku OS is as neat and intuitive as ever.

The UI has a few different sections to find your way around but the homepage is where you’ll be spending the majority of your time. Installed applications appear here as square tiles arranged into columns, not unlike the layout of Android TV. It’s quick and easy to add or remove channels and you can swap around the order based on which apps you use the most. 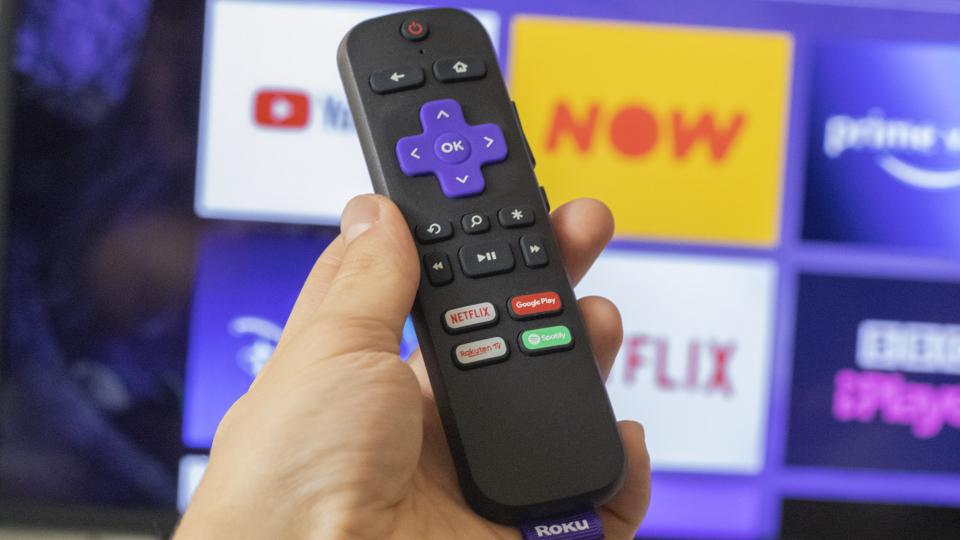 Two channels you can’t get rid of are “Bluetooth audio”, which explains how to play audio on the Streambar from external Bluetooth devices, and Roku Cinematic Sound, which is just a short sample film that showcases the Streambar’s audio capabilities.

There are thousands of apps and streaming services in Roku’s channel store, with 929 in Film & TV alone. Every mainstream platform is accounted for, from Netflix and Disney Plus to Prime Video and Now TV, and all of the free UK catch-up apps (BBC iPlayer, ITV Hub and so on) are here too. In fact, Roku is the only platform that doesn’t miss out on any key streaming service; even Google’s Chromecast lacks Now TV and Apple TV+.

You can do more than just watch TV and movies on streaming apps, however. There are also games, educational apps, photo viewers, news feeds and media players like Plex to play around with. More than enough to keep you busy, basically. 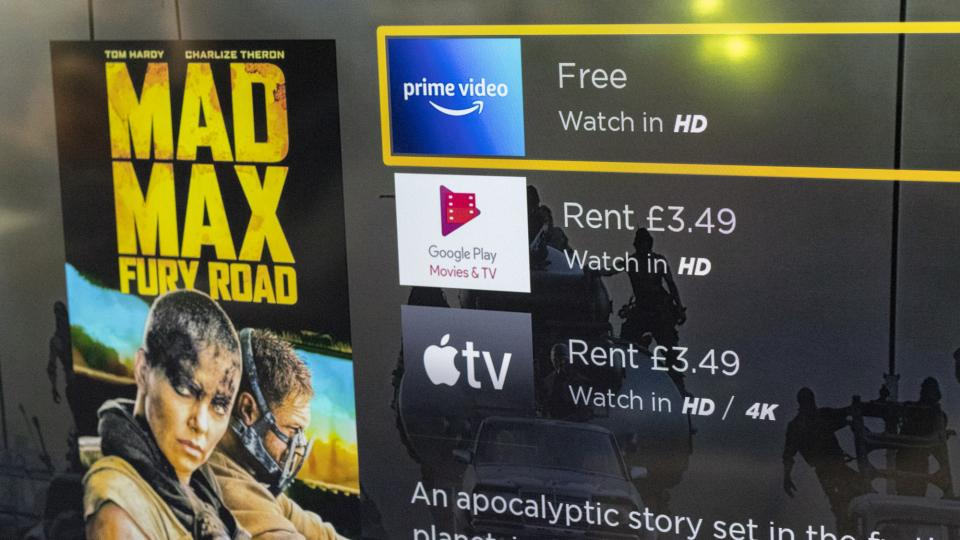 And finding content couldn’t be easier, either, thanks to the Roku remote’s voice search. State the name of the show or movie you’re after and it’ll take you a list of relevant results, and once you select a title you’ll see a menu of streaming options.

Roku will show you all the services you can watch it on and how much each one will charge you and, if it’s already on a service you’re subscribed to, you can launch right into it from here. Voice search can also be used to launch apps, bring up subtitles and find videos within the YouTube app.

As far as video format support goes, the Roku Streambar is reasonably well-appointed. It supports content up to 4K at 60fps and has HDR playback for HDR10, but it misses out on HDR10+, Dolby Vision and Hybrid-Log Gamma (HLG). HLG isn’t that big of a deal but HDR10+ and Dolby Vision are and I found myself switching over to my Samsung TV’s Tizen OS to enjoy HDR10+ content from the likes of Amazon Prime Video and Google Play Movies.

Native 4K and upscaled 4K content both look great with the Roku Streambar, however, and I didn’t notice any major playback issues. Ultimately, though, the image quality you’ll get from the Streambar will depend on the TV you’ve paired it with.

For anyone looking to improve their streaming experience and enjoy better audio without breaking the bank, the Roku Streambar is the obvious solution. It’s an all-in-one fix, adding great sound and a practically unlimited library of apps for only £130, and it’s extremely easy to set up too. 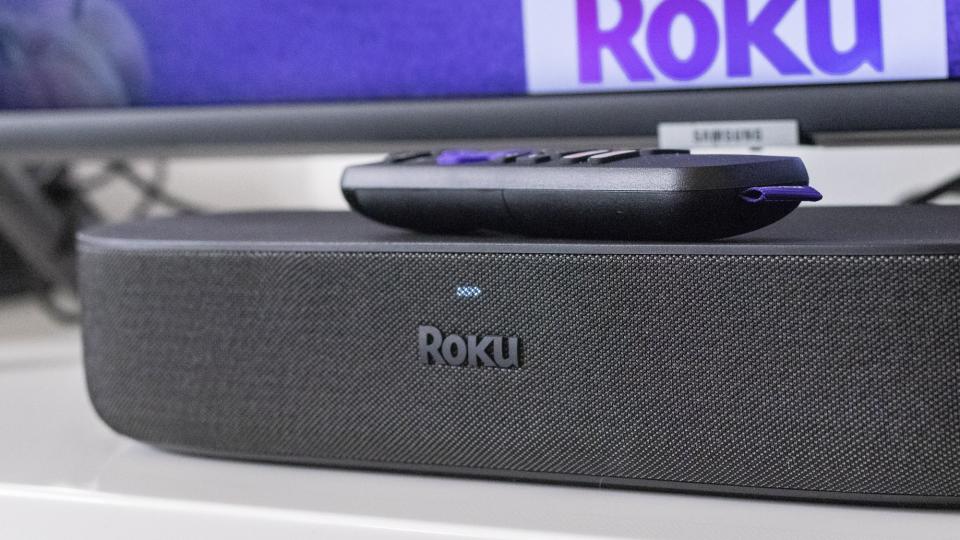 While you won’t get the all-encompassing surround-sound experience that more expensive soundbars deliver – it only has two channels, after all – the power and quality of the Streambar’s audio is much better than I expected from a device of this size.

The Streambar might not be right for people who already own a 4K streamer or a soundbar but, for those without either, it’s well worth considering.