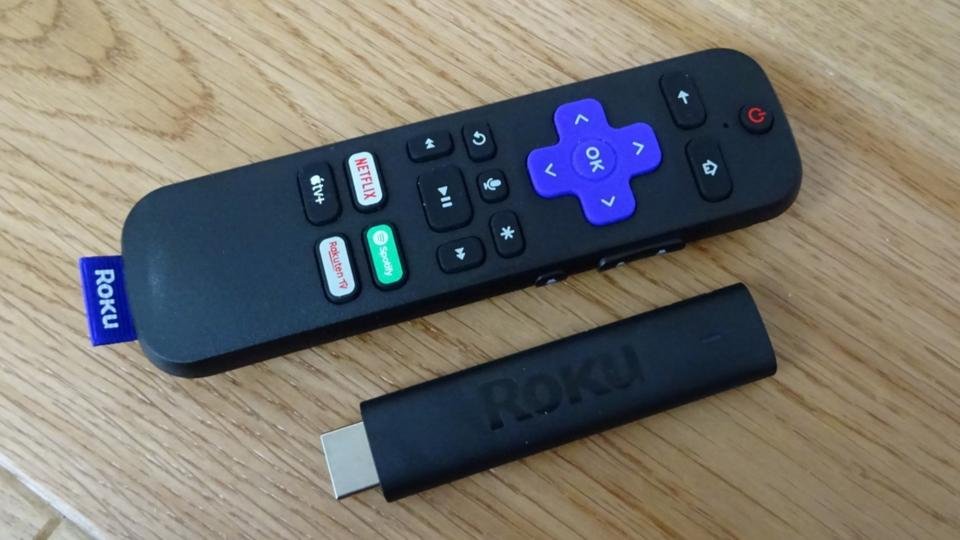 This easy-to-use, no nonsense streaming stick is one of our absolute favourites, and it’s currently cheaper than usual. Until the 16th of April, you can get yours for £40 (down from £50). Although, this price tends to swing back and forth every few months, so if now isn’t the right time, it’s bound to be back on offer again soon enough.Amazonwas £50now £40Buy Now

Since it made its debut in 2017, we’ve regarded the Roku Streaming Stick Plus as one of the top TV streamers, not least for Roku’s speedy, no-nonsense interface and inclusive approach. With Roku, you know where you stand: you’re not going to get a bunch of daft features you’re never going to use or a UI that steers you towards more paid-for services and add-on channels. What you are going to get is easy access to a full range of streaming services, including all the biggest names.

The Streaming Stick Plus was Roku’s first streaming stick with 4K and HDR support, and that came with a remote with TV power and volume controls. It’s still not a bad streaming stick today. Yet it is getting long in the tooth, with no support for the most recent HDR standards, no Dolby Atmos or DTS passthrough and the kind of wireless connectivity and processing power that was fine four years ago, but now feels slow. Hence the launch – finally – of a successor: the Roku Streaming Stick 4K.

Roku Streaming Stick 4K review: What you need to know

Like its illustrious predecessor, this is a 4K streaming stick that plugs directly into your TV via a spare HDMI port. It’s powered by a bundled micro USB cable with an integrated Wi-Fi module, that plugs into the bundled USB mains adapter rather than a USB port on your TV. Don’t even try doing that unless you want constant “Low Power” complaints. It also comes with Roku’s excellent voice remote with TV power and volume controls.

There isn’t much in the way of extravagant new features and the UI is, reassuringly, much the same. But what you do get is improved performance, better Wi-Fi connectivity and Dolby Vision and HDR 10+ support. It also recognises and passes through Dolby Atmos and DTS, although it won’t decode either format onboard.

Roku already has a cheaper 4K product, the Roku Express 4K, which is a compact module that plugs into your TV but has a slower processor and only supports basic HDR. It’s roughly half the price of the Streaming Stick 4K, though, and might cover you if you’re just trying to breathe new life into an ageing 4K telly.

Otherwise, the big competitors are Apple’s 2021 TV 4K box, the Google Chromecast with Google TV and Amazon’s latest Fire TV 4K. The former has a fantastic range of features and app support but also a not-so-fantastic price that starts at (gulp) £169.

The Google and Amazon streamers are more realistic alternatives and match the Roku on its headline features. What’s more, the Fire TV Stick 4K Max bests the Streaming Stick 4K by including Wi-Fi 6 support and both Google and Amazon have caught up with Roku when it comes to streaming service support.

However, there’s something to be said for Roku’s straightforward UI over Amazon’s all-singing, all-dancing, Amazon-centric software or Google’s sophisticated, search-focused effort. At this point, it’s a matter of preference as much as anything else, which you choose.

There’s not much between the old model and the Streaming Stick 4K in terms of the physical design – maybe a millimetre of difference in the dimensions here and there, while the two-tone gloss and matte-black finish has been switched for an all-black gloss. The charging port on the stick is still micro USB rather than USB-C, and it still sticks out slightly on one side.

As with the last version, the Wi-Fi receiver is built into the charging cable, and the biggest physical difference is that the remote control now has a slightly different line-up of channel shortcut buttons: out goes Google Play and in comes AppleTV+. 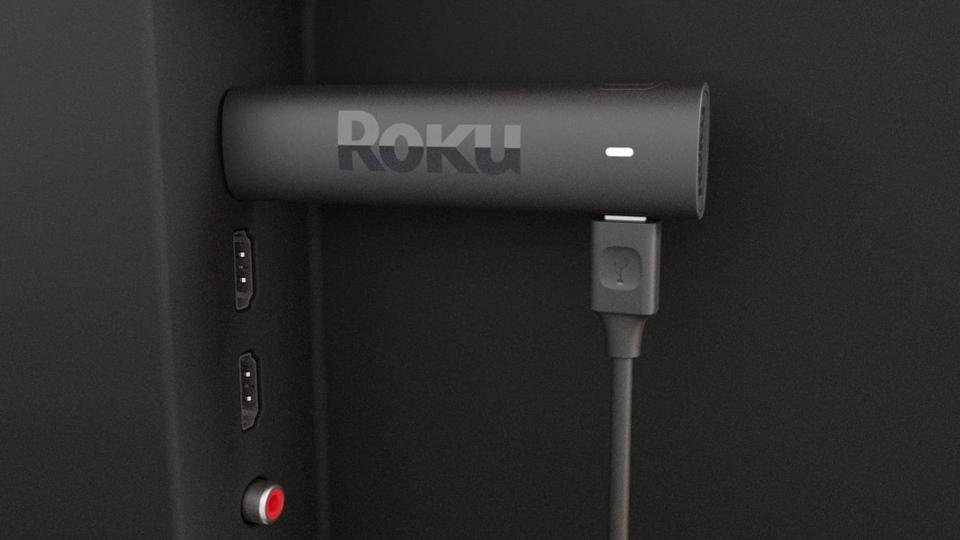 At worst, you might disparage Roku’s approach as iterative but that has its plus points. For instance, the whole setup process seems even more refined each time I go through it. Select your language, set up your Wi-Fi network and, once the software updates, it takes care of configuring settings for your TV by itself. You can, naturally, override the automatic settings or come back later and replace them with your own.

You can go through the rest of the setup process through your phone in the browser without installing any apps, and add channels from there. Once you’re finished, there’s an animated tutorial on navigating the UI, and a similar tutorial on handling voice commands if you need it. Generally speaking, it’s the easiest setup process of any TV streamer, not to mention most smart TVs.

The same goes for the UI as a whole. There’s nothing fancy here bar some settings for screensavers and themes. You get a Channel Store for adding extra services and not a lot beyond that. There’s a small selection of apps, mostly wrappers for streaming content, and you can install a handful of games but nothing much to go crazy about. If you want something that can do more than stream video, music and media, then you probably want to look at an Amazon Fire TV device or Apple TV box.

But if you’re mostly interested in, well, watching streaming services, the Roku UI makes it really simple. From the main scrollable grid of services, you just select one and start watching. When you’ve finished, simply press the Home button and you’re back where you started. It’s easy, predictable and quick and, while there isn’t the featured and recommended content you’ll see on other devices, there’s also less messing around trying to find what you’re looking for.

Roku also gets a lot of credit for its universal search capabilities, which work both through text entry and voice. There are limitations in that it doesn’t bring results from every app. Neither All 4 nor BBC iPlayer are indexed because they apparently don’t provide the necessary data. 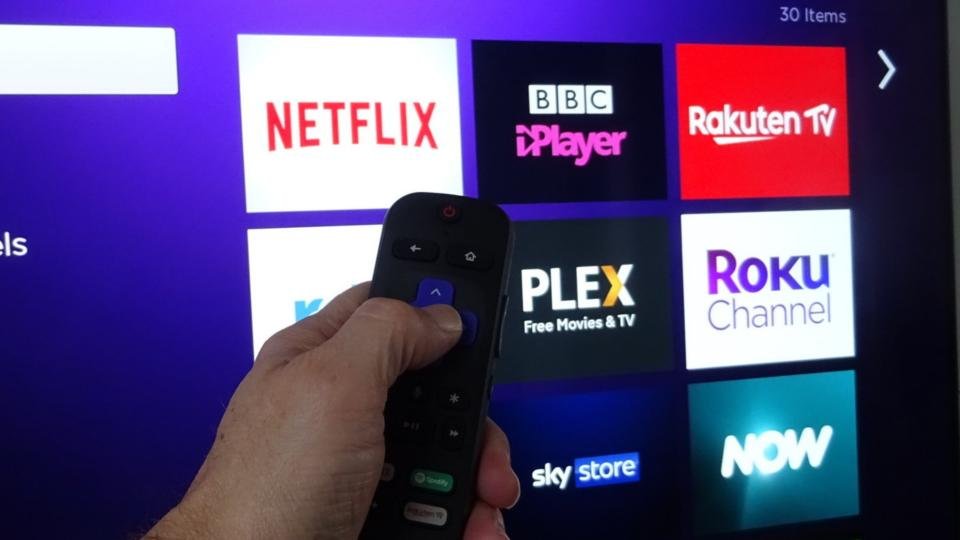 However, you can use voice to search for movies and programmes by title, actor or director and get results across Amazon Prime, Netflix, Now, Disney+, Apple TV+, Ratuken and most anything else you have installed. Even YouTube is searchable these days, although only within the app itself. You can also search by genres or types of movie and use voice commands to launch apps or control playback while you’re in them.

I’m not usually too bothered about companion smartphone apps but Roku’s really is worth installing. Not only does it offer remote control capabilities, mirroring the layout of the physical remote and providing an alternative interface aimed at touchscreen use, but it also delivers private listening, too.

Connect wired or Bluetooth headphones to your phone and you get the sound straight from the stick. It’ll even compensate for any Bluetooth lag. Amazon’s solution – Bluetooth streaming built into the stick itself – is more elegant but Roku’s still works extremely well.

The key thing when it comes to content is that there’s nothing significant missing. You’ve got all the major streaming platforms, including Netflix, Amazon Prime, Disney+, Apple TV, BlinkBox and Now, plus a horde of smaller channels and Plex for streaming local content from a NAS. There’s no Google Play TV and Movies anymore but only because Google TV is now a separate thing and the core stuff has been pulled into YouTube, including any music, films or episodes you’ve purchased.

What’s more, it looks fantastic. Even with 1080p content from BBC iPlayer, Netflix or All 4, the presentation is very clean, with natural but vibrant colours and plenty of detail. Switch to the new Imax 4K Dolby Vision content on Disney+, and the Roku does justice to some of the highest-quality streaming video out there, with beautiful colours, impressive definition, smooth motion and stunning HDR.

I spent a while watching chunks of shows and movies switching between straight 4K HDR and Dolby Vision, and there’s a noticeable gap in the experience, both between non-HDR and HDR and between basic HDR and Dolby Vision. On my LG OLED set, the presentation is richer and more cinematic, the highlights are brighter and there’s more shadow detail, but all without over-egging things or dishing out crushed greys. If you’ve got a good TV, the Roku will do it justice and, across a couple of late-night review sessions, I had to stop myself just watching highlights from Thor: Ragnarok, The Mandalorian and Avengers: Endgame and go and grab some sleep. 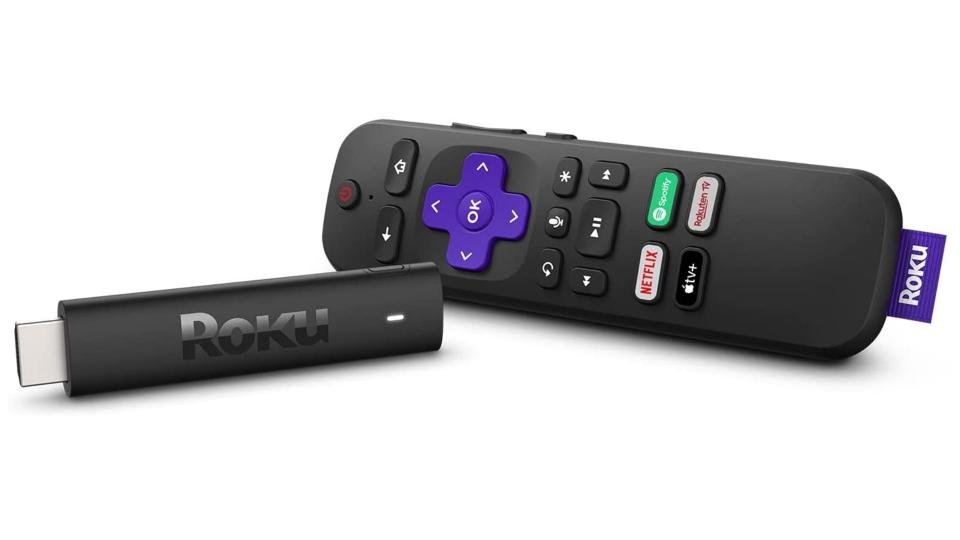 Of course, there’s an argument that, if you have a good TV, you probably have all the streaming apps you need without the Streaming Stick 4K. Yet this ignores the fact that some TV manufacturers are delivering well-specced screens with decent 4K HDR performance, but falling down on streaming apps, smooth motion or simple usability. Plugging a Roku Streaming Stick 4K in solves all these things.

What’s more, it really does feel fast, launching apps in seconds, loading content in just a few more, and switching back to the Home screen without any wait. Searches are near-instant, and you can go from the results to the content in a jiffy. There’s barely any noticeable delay for buffering and I hardly noticed any periods of getting stuck with a low bit-rate stream while the stick connects to something better, even on BBC iPlayer or Amazon Prime.

Across two locations in my home, one near the router, one served by a mesh extender, the wireless performance was impeccable. Whatever Roku is doing with its wireless module and smarty-pants adaptive algorithms appears to be working.

Improving on the Streaming Stick Plus was a tall order but the Streaming Stick 4K is even better. Its 4K HDR and Dolby Vision playback quality is incredible, it’s super speedy and its wireless connectivity is excellent. Meanwhile, the UI and app line-up remains as strong and niggle-free as ever.

Of course, the Amazon competition is stronger than ever, and if you’re in that ecosystem with a bunch of Echo hardware, then the Fire TV Stick 4K is a stronger choice. If not, though, buy the Roku; it’s once again the reigning champ of streaming sticks.