Windows 10 Setup Script is a PowerShell script designed to be run right on the first run after Windows 10 was installed and set up on a computer. The main idea behind the script is to give administrators ample options to customize the experience, e.g. by modifying privacy related settings, making other tweaks, or removing built-in applications.

Note: Windows 10 Setup Script is an advanced script that should not be run on Windows 10 installations that are not new. Additionally, since it can potentially change many settings and options on the system, it is advised to create a backup before you run the script.

Tip: check out our overview of privacy tools for Windows 10.

Using the script requires some preparation. First, it is important that you download the script for the target version of Windows 10 that you want to modify. The developer offers scripts for Windows 10 version 1903, 1909, 2004 and Windows 10 LTSC 1809. A test version for Windows 10 21H1 is in the works right now as well.

Once you have downloaded and extracted the right version, it is necessary to open the script in a text editor or PowerShell IDE as it needs to be configured before it should be run. While you can, in theory, run the script and use all of the defaults, it is better to go through the script to enable or disable the options to be in line with your expectations. 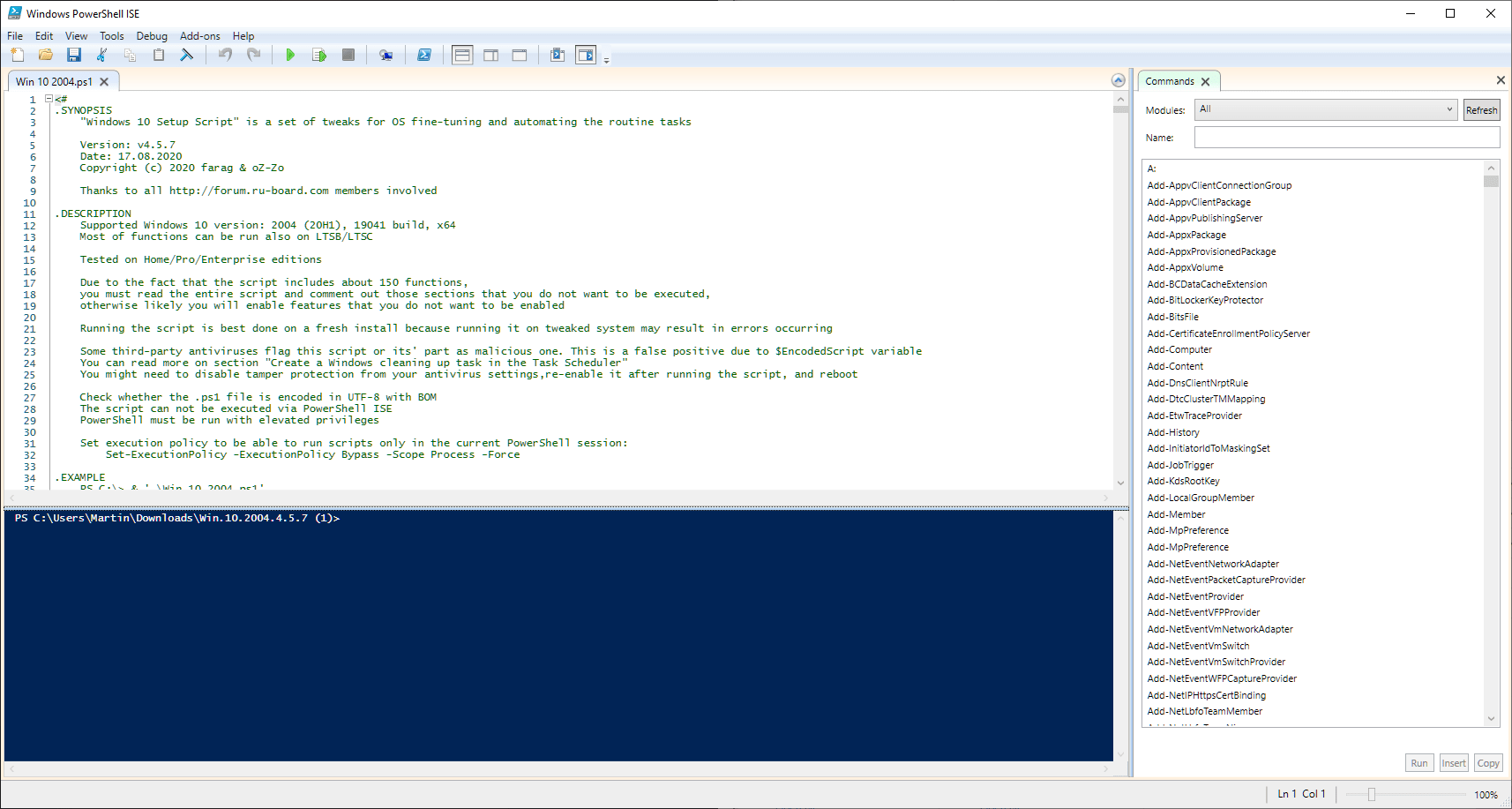 Users who cannot read PowerShell scripts may still do that as documentation is provided in the form of comments. Still, it is best suited for advanced users who will feel more comfortable doing that. The Windows 10 version 2004 script has a total of 3488 lines and that takes some time to go through, even if you are an advanced user.

So, what modifications does the script support? Among others (the full list is here):

All you need to do is use comments # to enable or disable certain tweaks in the script. Just place these in the front of commands to skip them when the script is run. Save the script once you have modified it.

Now it is necessary to run it on the system. This requires that you set the execution policy to bypass as Windows 10 will refuse to run the script otherwise.

The program may display some choices to you, e.g. a list of apps to uninstall, depending on your editing of the script.

Windows 10 Setup Script is an advanced tool for advanced users and system administrators who want to modify new installations of Windows 10 right from the get-go. It takes quite a bit of preparing as you need to go through the script to make sure that everything is set up according to the needs before the script is run.

All in all, a great tool for advanced users who want to modify the system heavily.

Thank you for being a Ghacks reader. The post Run Windows 10 Setup Script after installation to customize the OS appeared first on gHacks Technology News.