The Samsung AU9000 sports a lovely design, great pictures and plenty of features at a very affordable price

The Samsung AU9000 is one of the company’s cheapest 4K TVs and the perfect example of why it dominates this end of the market.

It’s affordable without looking like a budget model, boasts features found further up the manufacturer’s range and the SDR and HDR pictures it produces are excellent.

Throw in an extensive suite of gaming features, very low input lag and support for all the main streaming services courtesy of Samsung’s Tizen-powered smart platform and you’ve got yourself a truly impressively mid-range 4K TV. Samsung AU9000 review: What you need to know

Like the other entries in the Crystal UHD range – the AU7100 and AU8000 – the AU9000 is powered by Samsung’s Crystal Processor 4K, features an edge-lit 60Hz VA-type LCD panel and supports HDR10, HLG, and HDR10+. However, the AU9000 is the only model in the series offering Samsung’s Game Bar and Object Tracking Sound Lite features.

As is the case with all of Samsung’s 4K TVs, the AU9000 runs Tizen OS, which provides access to all the major content streaming platforms, including Netflix, Disney Plus and many more. You can currently buy the 43in Samsung AU9000 for £469, which is very affordable when you consider all that this TV includes. If you’re looking for similarly priced alternatives, there’s the Hisense A6G at £329, and the LG UP75, which will set you back £399.

The A6G sports equally impressive looks and includes Dolby Vision, but isn’t quite as accomplished when it comes to picture quality and gaming. It also lacks a few key video streaming apps. Thanks to the inclusion of webOS, the UP75 offers a comprehensive choice of streaming apps, and also delivers accurate SDR and HDR images. But it suffers from an uneven backlight, poor black levels and a very budget appearance.

You also have a couple of 4K options that run the Roku operating system, both of which perform admirably and won’t break the bank. The 43in Hisense Roku TV is available for just £329, while the same sized TCL Roku TV is even cheaper at £270.

The Samsung AU9000 certainly doesn’t look like a budget TV, with an attractive design and narrow black chassis that Samsung has christened “AirSlim”. There’s a 7mm wide bezel with a chamfered finish surrounding the screen, a 5mm black border around the image itself and a 10mm strip along the bottom. Overall, this is an eye-catching TV.

The chassis itself is only 26mm deep, with the 43in version measuring 966 x 188 x 624mm (WDH) and weighing 8.6kg with its feet attached. These slot into grooves at the rear and provide 80mm of clearance beneath the image. A section of plastic can be used to connect the two feet, which stand 640mm apart, but you’ll want to leave this off if you’re planning to slot a soundbar under the screen.

It’s worth noting that different sizes of the AU9000 come with different stands. The 43in and 50in models use the design described above, while the larger options feature a base that sits directly under the centre of the screen. All models can be wall-mounted via 200 x 200 VESA fixings on the rear. The connections are located to the back right of the panel as you face the screen. There’s a combination of rear- and side-facing inputs, with the latter only 170mm from the edge, which is a shame because there’s a danger of unsightly cables poking out from the side of the screen.

There are three HDMI 2.0 inputs, one of which (HDMI 2) supports eARC, and all of which are capable of handling 4K resolution at 60Hz, CEC, Variable Refresh Rate (VRR) and Auto Low Latency Mode (ALLM) – making this TV a solid choice for gamers. There are also two USB 2.0 inputs, a terrestrial tuner, a CI slot, an optical digital output, and an Ethernet port for a wired connection. In terms of wireless connections, both Wi-Fi and Bluetooth 5.2 are supported.

There’s a choice of the standard Samsung controller or a sleeker remote that sports a simpler button layout. The latter is comfortable to hold, intuitive to use, and has all the buttons you need for initial set-up and operating the TV on a day-to-day basis.

The Samsung AU9000 includes the full Tizen-powered smart platform and it’s responsive, intuitive and easy to navigate. There’s a launcher bar along the bottom and a second layer that provides faster access to the various streaming services.

There’s an impressive choice of apps for a TV at this price point too, with Netflix, Prime Video, Now TV, Disney+, Apple TV+, Rakuten, YouTube, and all the UK TV catch-up services; plus there’s the Universal Guide to help you sift through the extensive selection of content.

There’s also Samsung’s free content service TV Plus, a web browser, and the SmartThings app, which helps makes the initial setup of the AU9000 a doddle. When it comes to smart assistants, the AU9000 is very well-equipped, with Samsung’s Bixby, Amazon Alexa and Google Assistant all built into the set.

The Samsung AU9000 delivers excellent image quality but isn’t without limitations. It uses a VA panel, which means for an LCD TV it delivers a decent contrast ratio of 4,000:1 and some nice shadow detail. However, it also means the optimal viewing angles are fairly limited, so you’ll want to be facing the screen head-on when watching TV.

The edge LED backlighting is also quite effective, producing good screen uniformity when viewing a 5IRE full-field pattern. The Filmmaker Mode is very accurate out of the box, with superb greyscale measurements and an average DeltaE (error) of 1.5 illustrating accurate greyscale tracking across the full range of brightness levels. The colours are equally impressive, delivering average errors of only 1.3 on a full saturation sweep. Only the gamma is a bit ropey, revealing a classic s-curve that reflects a slight loss of detail in very dark areas. SDR picture performance is very accomplished, with pictures that appear well defined and colours that look natural. The overall image feels balanced, with decent blacks despite the lack of any local dimming, punchy highlights, and some excellent gradation in the shadows. There’s also some effective processing and upscaling, allowing the AU9000 to render lower resolution content with clean and detailed images that are free of unwanted artefacts.

The motion performance is also good for an LCD TV, and despite being limited to a 60Hz refresh rate, the AU9000 handles difficult material like football with a degree of skill. It also plays back 24p content without introducing judder, ensuring movies retain a cinematic quality. The Picture Clarity settings offer frame interpolation options, and while these are good for content like sport, they should be avoided when watching films and TV dramas.

The AU9000 covers 100% of the BT.709 colour gamut without any issues and manages to cover 94% of the wider DCI-P3 colour gamut in Filmmaker Mode despite the absence of quantum dot technology. It tracks these colours fairly well across different saturation points, but the colour tone-mapping could be better, and with an average DeltaE of 6, the displayed colours visibly differ from the original colour standard. That said, while watching HDR content, the overall image looks natural enough, with detailed, suitably saturated images. The black level isn’t as deep as on more capable displays, and the specular highlights lack a degree of pop, but this is a commendable HDR effort for a TV at this price point.

The AU9000 supports HDR10, HLG and HDR10+, but not Dolby Vision. However, the absence of the latter has nothing to do with the TV’s mid-range status – none of Samsung’s models support the format, with the company instead opting for the royalty-free HDR10+. HDR10+ performance was good in testing, and while not as prevalent as Dolby Vision, is a format used by Prime Video and some 4K Blu-rays.

The Samsung AU9000 offers a host of useful gaming features, making it a solid choice for gamers. The 60Hz panel and lack of an HDMI 2.1 port mean it doesn’t support 4K resolution at 120HZ but it can handle games at 4K resolution at 60Hz with HDR enabled. There’s also support for VRR in the form of FreeSync and an Auto Low Latency Mode (ALLM).

The latter automatically detects a console and selects the Game Mode, which produces an incredibly low input lag of only 9ms. The TV also supports 21:9 and 32:9 ultra-wide aspect ratios, along with the Motion Xcelerator Turbo feature – Samsung’s take on black frame insertion – which simulates a faster refresh rate of 120Hz, albeit at 1080p. The Game Bar is a new addition to some of Samsung’s TVs this year and provides all the main gaming info and settings in one convenient display. It pops up when the play/pause button is held down and includes the HDR, frame rate, and VRR status, as well as key gaming picture adjustments.

The gameplay is excellent, with the 4K resolution and bright HDR rendering the ray-traced action of Call of Duty adeptly. Motion is smooth and free of artefacts, while the incredibly low input lag ensures responsive gaming.

The Samsung AU9000 is weakest when it comes to sound, and that’s as much because of the slime-line chassis as its price point. The reality is that it’s nearly impossible to cram a decent set of speakers into a chassis only 26mm deep and to do so would be prohibitively expensive.

What you do get is a pair of downward-firing drivers, each with 10W of built-in amplification. In order to boost the AU9000’s sonic delivery, Samsung has also added its Object Tracking Sound (OTS) Lite immersive audio algorithm and AI Adaptive Sound acoustic processing. 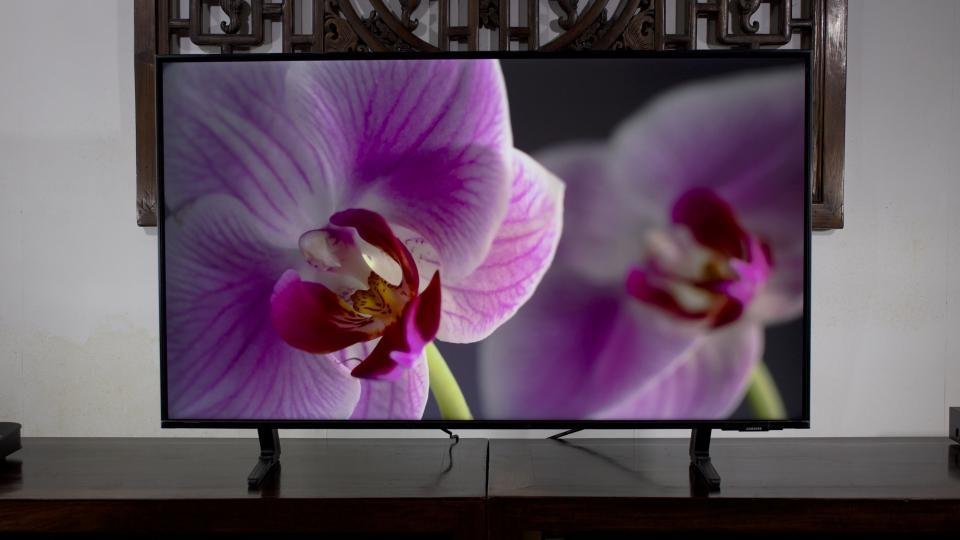 While these features can’t work miracles, they do manage to tease out a more spacious delivery with a sense of added height, although this comes at the expense of the TV’s sonic focus. Simple stereo effects feel somewhat muddy, and the frequency response comes across as rather flat. On the plus side, dialogue remains clear and you can drive the volume without the soundstage falling apart, but there’s no real sense of scale and little in the way of bass.

If you want decent audio quality and deeper bass to match the AU9000’s impressive picture quality, you should really consider investing in a soundbar. Since this TV includes Samsung’s Q Symphony Lite feature, which integrates the TV’s speakers with that of a supporting soundbar, you might be best considering the company’s latest models, which include the HW-Q800A.

The Samsung AU9000 is an accomplished 4K TV that successfully delivers similar performance and features to models further up the company’s range. SDR picture quality is impressive, the upscaling is excellent and contrast ratios are decent for an LCD TV. HDR tone-mapping is effective, too, and there’s support for HDR10+, which may not be as widely available as Dolby Vision but is a welcome inclusion nonetheless.

Low input lag and Samsung’s handy Game Bar make it a decent choice for gamers despite the lack of HDMI 2.1 ports, while Samsung’s Tizen OS ensures it’s appropriately smart, with three voice assistants built-in and a comprehensive selection of streaming services to choose from.

Mediocre peak brightness and lacklustre audio quality may highlight its affordable origins, but the AU9000 ultimately punches well above its weight, proves that affordable TVs don’t have to look cheap, and is the model to beat in its price bracket.