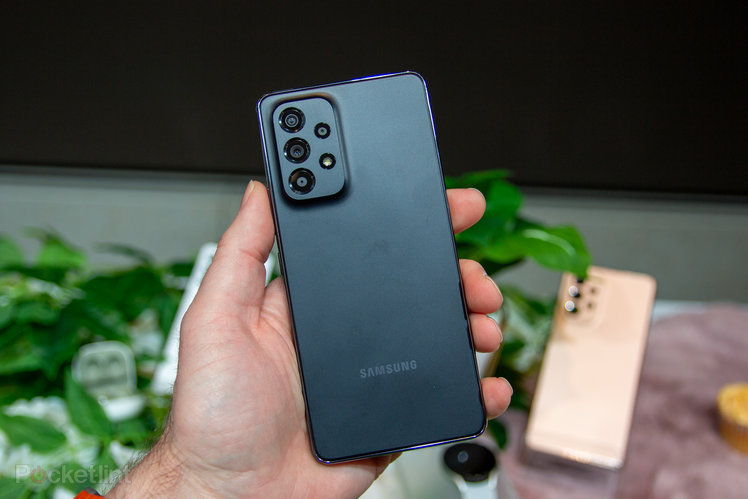 The Galaxy A series sees the most voluminous sales for Samsung, with this model, the Galaxy A53 5G, likely to be one of the most important handsets that Samsung will offer in 2022.

So this is a mid-range device to be excited about?

To look that there isn’t a huge difference between the Samsung Galaxy A53 5G and the Galaxy A52 5G (or A52s 5G) from 2021. That’s no bad thing, because this is a good-looking phone. 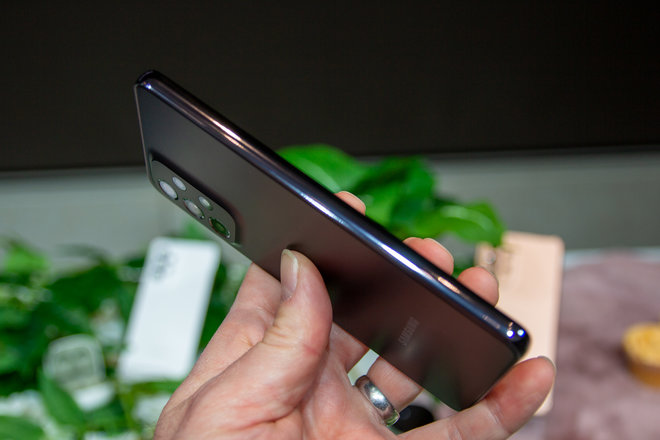 While it doesn’t offer premium materials you’ll find on Samsung’s higher-placed devices, there’s a great feel to the frosted rear, although it is plastic here as many Samsung phones now are. But we like that moulding around the cameras – something that’s also now reflected on the slightly lower-placed Galaxy A33 5G launched alongside.

While much of this phone is the same is the 2021 model, you might have noticed that there’s now no 3.5mm headphone socket. Mid-range devices are often praised for including these features to support those wanting to use existing headphones, so it’s perhaps a strange omission here. 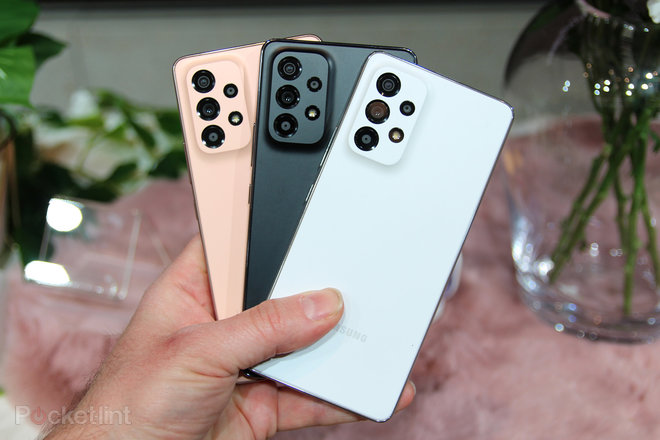 This is a pretty big device – generous in fact – but it’s not too large and feels great to hold, based on our limited time with it so far. We also haven’t had the chance to test the stereo speakers, but we will as soon as we get our hands on this phone again.

There’s a 6.5-inch display on the front of the Galaxy A53 and this is an AMOLED panel as you’d expect – so it appears to have plenty of vibrancy in those colours and deep blacks.

That’s going to be popular, as, based on our first impressions, there isn’t a huge difference here to what you might find on one of Samsung’s flagship devices – visually, at least. 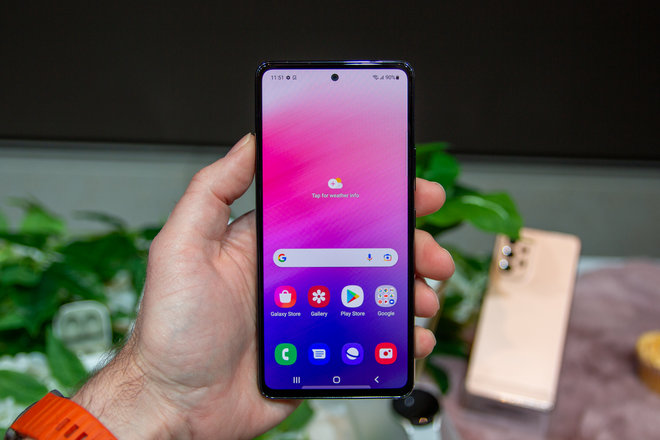 The resolution sticks to FHD+ – 2400 x 1080 pixels, 404ppi – which is typical for a device in this position. It also offers a 120Hz refresh rate, so it will be able to smooth out fast moving content to give you a better experience.

The display is topped with Gorilla Glass 5 to keep scratches at bay, while it has a central punch hole camera, giving it a more premium look than the lower-placed Galaxy A33. There are also slightly narrower bezels on this model compared to the A33, so it’s a better looking device overall.

From the time we’ve spent with the Galaxy A53 5G we haven’t had the chance to fully test the display, but first impressions are good. There’s an under display fingerprint scanner too, which we’ll test in a future full review.

The Galaxy A53 5G makes a bit of a departure in 2022, now landing with updated Exynos hardware. Samsung’s headline here is that this is the first time that a 5nm architechture has been used in the Galaxy A series, an indicator that it’s not being held back. It should be more efficient, able to deliver its performance with lower power consumption. 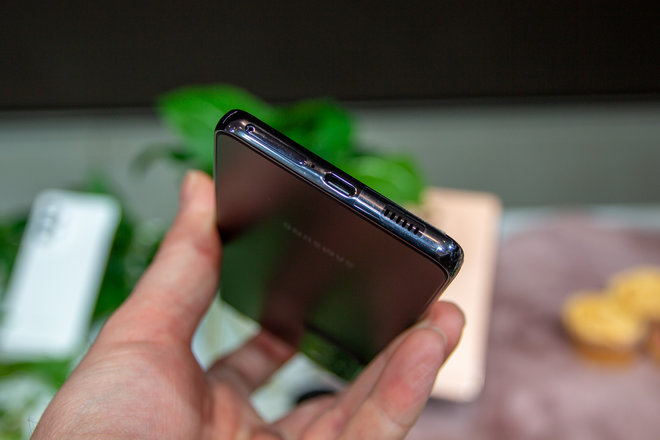 Samsung claims that this new Exynos 1280 gives a boost over the previous hardware used on this grade of device, so this phone should be a better performer, while continuing to offer 5G connectivity. It’s paired with 6GB of RAM, although there’s the option to allocate some of the storage as virtual RAM – up to an additional 6GB.

There’s 128GB of storage (there may be other options, but Samsung hasn’t confirmed those with us) and there continues to be support for microSD up to 1TB, which is a big advantage of choosing a mid-range phone. 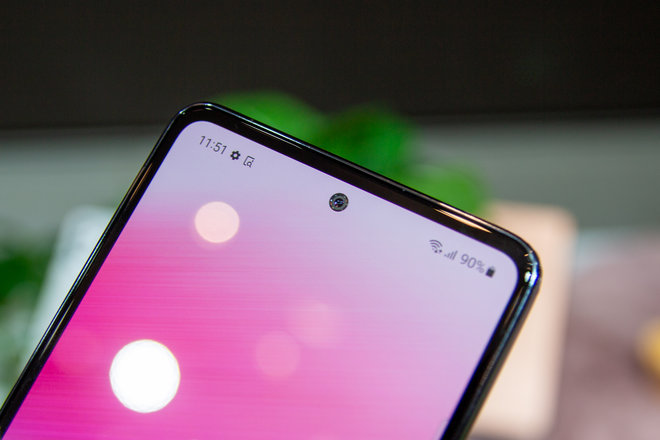 In the short time we spent with the phone it wasn’t possible to gauge what the performance will be like day-to-day, and with the change to new hardware, we’ll reserve judgement until we’ve fully reviewed the phone.

There’s a 5000mAh battery, with support for 25W charging. That’s a generous capacity and increased over the previous version of this phone. We suspect that this will lead to great battery life in typical use – Samsung is promising 2 days of life.

The phone launches on Android 12 with Samsung’s One UI over the top – and the promise of 4 years of OS updates and 5 years of security updates.

There’s a quad camera system on the rear of the Galaxy A53 5G, but keep your excitement in check while we explain what you’re looking at here. As is common in mid-range devices, you have two cameras that are worth exploring and two that are likely just thrown in to make up the numbers.

The main camera has a 64-megapixel sensor and offers OIS – optical image stabilisation – on its lens and that should help to keep images cleaner over longer exposures. There’s also night mode on this phone – something that some budget phones miss out on, like the iPhone SE. 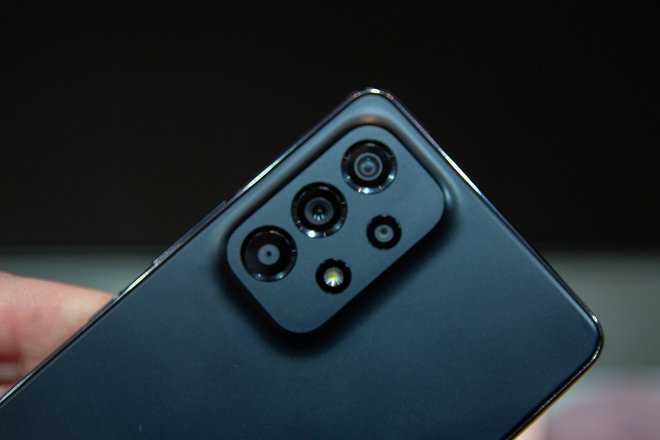 Although we haven’t fully tested this camera system, we expect the main camera to be pretty good, based on using this sort of hardware in other devices. But note – it’s only the main camera that has autofocus, the rest are fixed focus.

There’s no zoom on this phone, with Samsung instead suggesting you might shoot in full resolution (at 64-megapixels) and crop in, but otherwise you’re looking at digital zooming – so don’t expect too much from zoom photos.

The ultra-wide camera has a 12-megapixel sensor and we’ve always been fond of ultra-wide, ever since LG started pushing this on phones about 5 years ago. Again, we need to test it in the real world to gauge the performance of this particular lens. 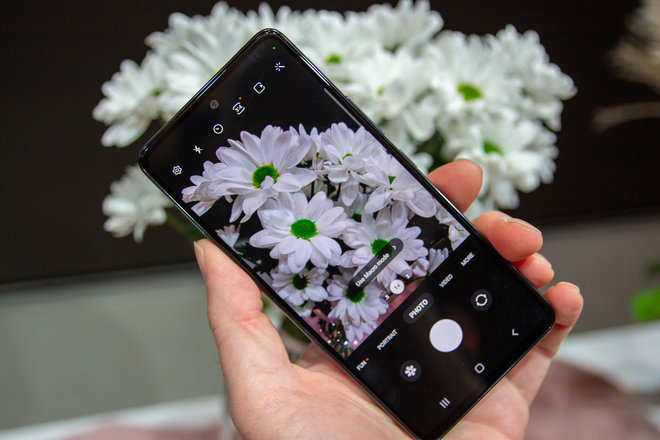 Now we move to the final two lenses. We’ve said this many times before, but it looks like these lenses are just thrown in to make the phone look better. The depth sensor is of questionable value as plenty of flagship phones produce outstanding bokeh photos without such lenses (it’s mostly done by software these days), while the macro lens – based on similar on other phones – is likely to be pretty poor.

But, it seems that the Gods of smartphones have decreed that the number of lenses is more important than the results they produce in mid-range phones, so it is what it is. We will, of course, test all these cameras in our full review, as well as determine whether the depth lens actually does anything at all.