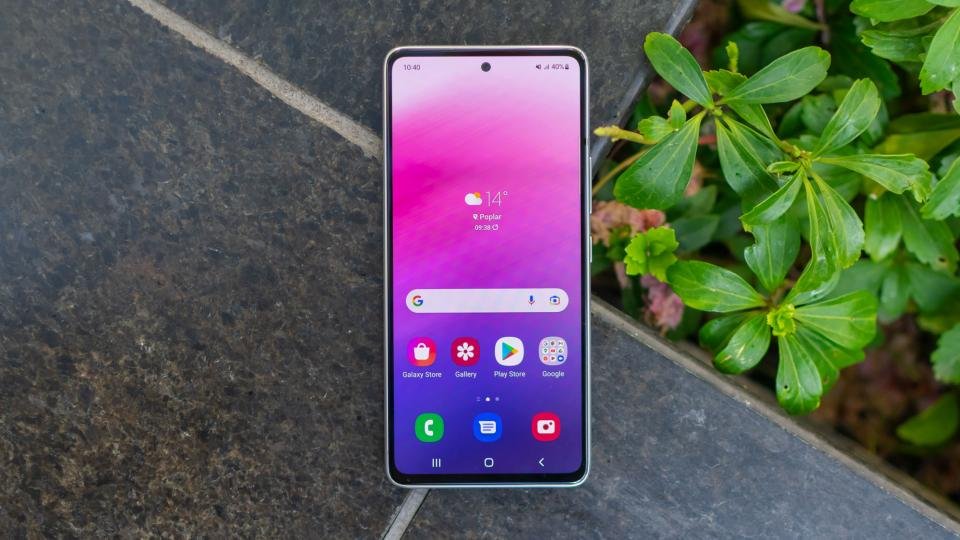 Can’t afford the S22? The Samsung Galaxy A53 5G is the next best thing

The Galaxy S22, as impressive as it may be, is still a handset reserved for the plumpest of wallets. If you can’t stomach the price but don’t want to scrimp on features, then Samsung may have addressed that particular problem with the Galaxy A53 5G.

In what looks like a great-value alternative, the A53 5G joins the ranks of Samsung handsets costing half the price of its flagships. It still isn’t the cheapest in its roster but the A53 5G still packs in plenty of features for relatively little money.

Samsung Galaxy A53 5G review: What you need to know

Launching alongside the slightly cheaper A33 5G, this is Samsung’s first attempt at cracking the mid-range market in 2022. As far as specifications go, however, it’s just as well-equipped as any modern smartphone, with a handful of surprises dotted along the way. 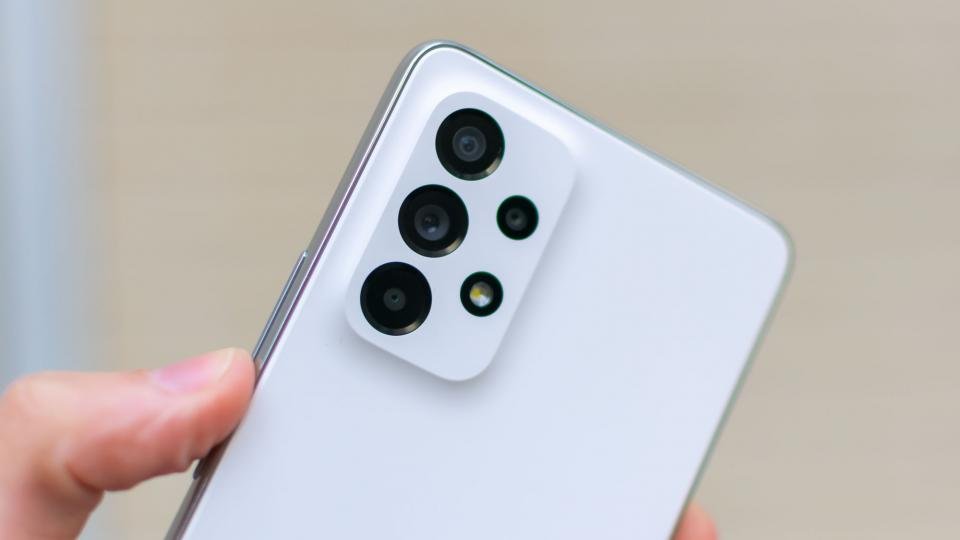 To begin with, you’re getting a 120Hz FHD+ AMOLED display for almost half the price of the Galaxy S22 and it’s bigger, too, at 6.5in to the S22’s 6.1in. Samsung’s mid-range Exynos 1280 chipset can be found inside, promising big performance improvements compared with the previous A52 5G and this works alongside 6GB of RAM and 128GB of expandable storage.

The A53 5G comes with a total of four rear cameras, with the highlight being the primary 64MP (f/1.8) lens. This is accompanied by a 12MP ultra wide plus a 5MP depth and a macro camera. It also happens to be one of Samsung’s cheapest 5G handsets and it comes with Android 12 pre-installed.

You get all that for the relatively low price of £399. That’s the sort of price that makes you wonder why Samsung decided to charge almost double the price for the Galaxy S22 – especially when they’re not that dissimilar when it comes to features.

But this is what we’re coming to expect from mid-range smartphones in 2022 and there are plenty of options at around this price. The Realme 9 Pro Plus, for instance, is our favourite and comes with a similar set of features, although it’s powered by a different chipset – the MediaTek Dimensity 920.

The latest iPhone SE (2022) is £70 more than the Samsung and also a decent alternative. It incorporates Apple’s flagship A15 Bionic chipset, which nothing comes close to for performance, but it isn’t the most attractive phone and poor battery life lets it down. 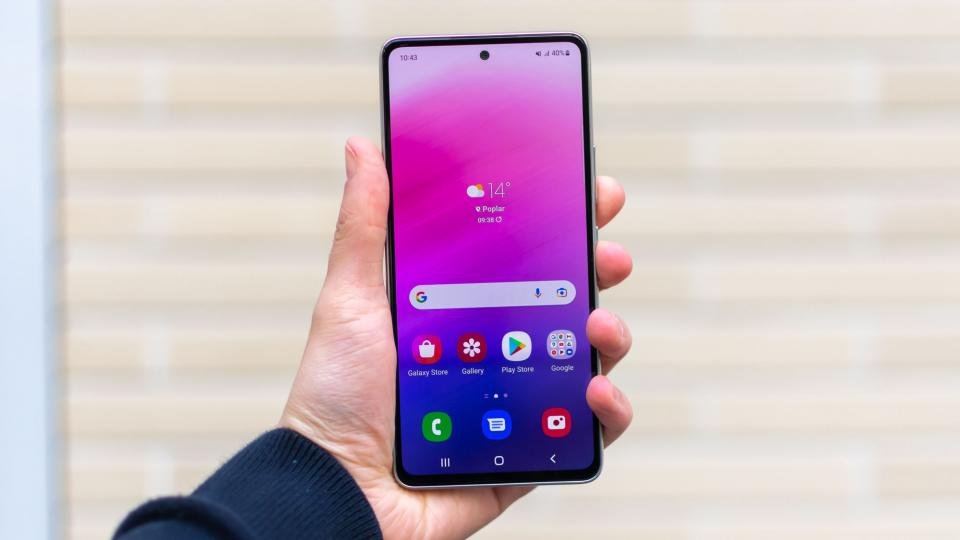 There’s plenty of choice for less money, too. The Redmi Note 11 Pro 5G is £80 cheaper, and is perhaps the best-value smartphone on shelves today, equipped with a capable Snapdragon 732G processor, 120Hz OLED screen and 67W fast charging.

Not to mention that Samsung’s own Galaxy A33 5G also gets in the way a bit. It’s a 5G-capable mid-ranger but for the same price as the Redmi (£329) it shares the A53’s Exynos 1280 chipset, with the only downsides being a 90Hz refresh rate and slightly weaker cameras.

The A53 5G’s design is certainly eye-catching but there are hints, on closer inspection, that it isn’t quite as lavish as the Galaxy S22. It’s a big handset, with a 6.5in display and narrow bezels, and I particularly liked the way the rear camera housing blends neatly with the rest of the phone.

Despite the plastic construction, it doesn’t feel cheaply made, either, and it also comes with IP67-rated water and dust protection. The chrome-tinted edges are a nice touch, and the phone comes in four “Awesome” flavours: Awesome Black, Awesome White and the new Awesome Blue and Awesome Peach colours. I was sent the white model for testing, which you can see in the pictures dotted around this review. 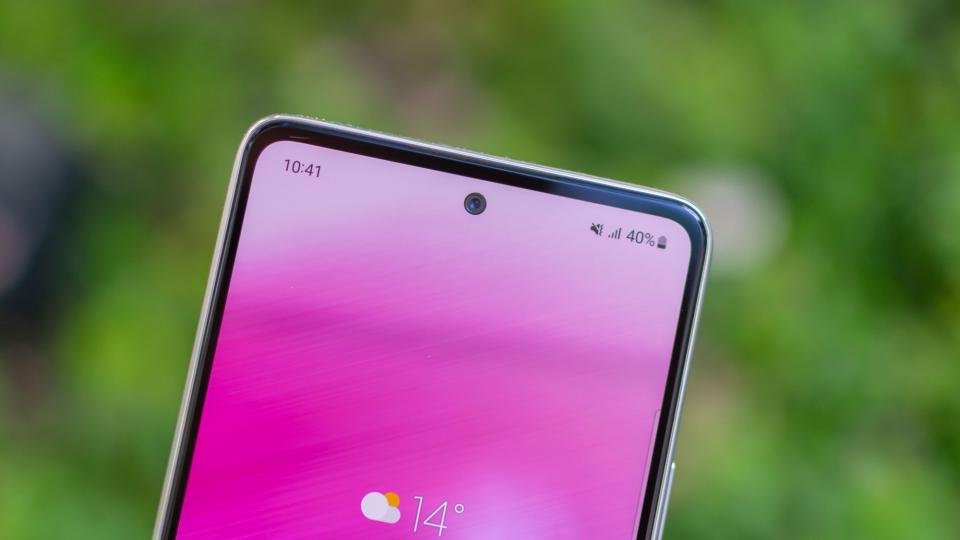 A small hole punch notch sits at the top of the A53 5G’s display, which houses the 32MP selfie camera, plus there’s an ultrasonic fingerprint scanner embedded under the screen, which can be used for unlocking the phone and authorising contactless payments. This worked well in my tests.

In fact, the only real downside is that the Galaxy A53 5G doesn’t have a 3.5mm headphone jack. If you’re after a Samsung that supports wired audio connectivity, you’ll have to go much cheaper and get the Samsung Galaxy A13 instead.

Naturally, the A53 5G comes with Android 12 from the get-go, with Samsung’s OneUI 4.1 skin placed on top. New UI and settings additions for this year include extra themes and colour palettes, as well as new privacy controls – including a green indicator in the top-right corner of the screen that appears whenever an app is using your camera or microphone.

As for the display, this is yet another Super AMOLED number, with an adaptive refresh rate of up to 120Hz and an FHD+ (1,080 x 2,400) resolution. The screen to body ratio is roughly 85% and the display has a not-so-bad pixel density of 405ppi.

Samsung’s screens typically favour saturation over outright colour accuracy and the same is true with the Galaxy A53 5G. The overall quality is rather good, though, especially if you switch off the default Vivid mode and enable the phone’s Natural display setting instead. 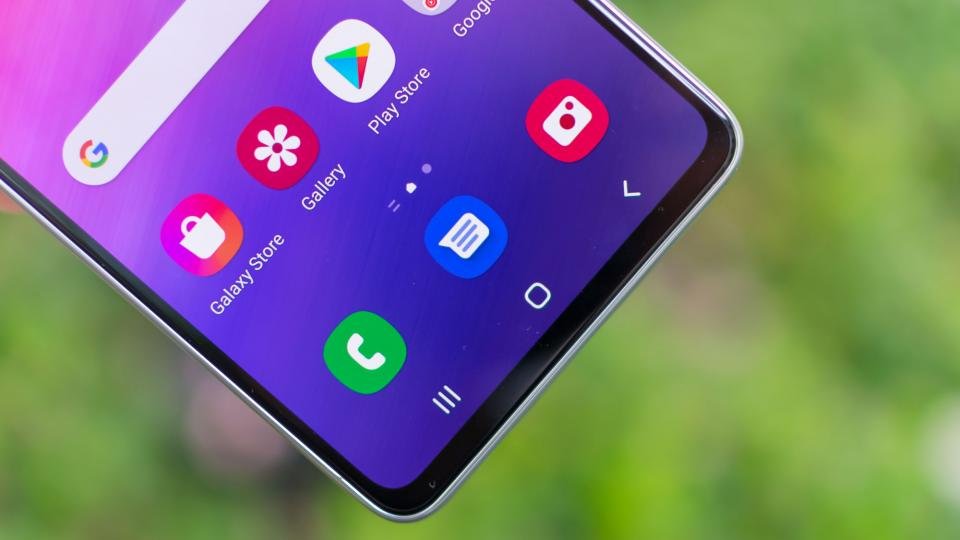 In this mode, the Samsung Galaxy A53 5G achieved an average Delta E (colour variance) score of 1.18, which is miles better than the A52 5G. It also covers 93.7% of the sRGB colour space, with a total volume of 96%. There are a few discrepancies in red tones, but everything else is bang on the money.

Brightness is also significantly improved, with a measured peak luminance of 706cd/m2 with the auto-brightness setting engaged. It’s an OLED screen, too, so contrast is effectively perfect.

The only issue is that the A53 5G isn’t certified for HDR playback, although rivals such as the Realme 9 Pro Plus aren’t HDR compliant either. What this means is there’s a chance that movies and TV shows might not look as good as they could, but the vibrance of the OLED display covers for this lack admirably.

The A53 5G also gets 6GB of RAM, with 128GB of internal storage that’s expandable up by a further 1TB via microSD. Samsung’s mid-ranger also comes with the same “RAM Plus” mode as the S22, which when enabled allocates either 2GB, 4GB or 6GB of onboard storage to be used as virtual memory. In theory, this should help improve multi-app performance and split-screen multitasking – although I didn’t notice any difference in my tests.

On that note, it’s fair to say that the Galaxy A53 5G did rather well in the Geekbench 5 single- and multi-core CPU processing benchmarks, but it doesn’t stretch out a lead over its rivals. It matched the performance of the Poco X4 Pro 5G and Realme 9 Pro Plus and, in general use, everything feels remarkably snappy but it’s still no match for the iPhone SE’s A15 Bionic.

The A53 5G is a decent performer in the GFXBench Manhattan 3 tests, too, providing a 40% improvement over the previous A52 5G in the on-screen benchmark. Games should run significantly faster as a result, although don’t expect to be pumping out enough frames to get the most out of the display’s maximum 120Hz refresh rate.

The phone’s 5,000mAh battery, however, is its best feature. It has 25W fast charging support, which in my testing charged the phone from zero to 50% in around 35 minutes and there’s support for Samsung’s adaptive power-saving feature, which automatically switches on the power saving mode when the charge falls below 50%.

The best news is that the battery delivers exceptional stamina. Lasting 21hrs 57mins in our video rundown test, the A53 5G is only beaten by the Realme 9 Pro Plus, which lasted 25hrs 17mins.

The Galaxy A53 5G uses the same combination of cameras as the previous model, with a quad-camera array on the rear, consisting of a 64MP (f/1.8) main camera with OIS, 12MP (f/2.2) ultrawide, 5MP macro and 2MP depth sensor.

As before, the A53 captures lower resolution pixel-binned images by default but where the phones differ is with a new multi-frame image processing algorithm, which now combines 12 pictures into one image every time you press the shutter. There are a handful of new portrait bokeh and lighting effects to play around with, too, but these are minor changes.

The good news is there’s still an awful lot to like in terms of image quality. While I don’t still have the A52 5G for comparison, I was impressed with the A53’s detail capture, its good use of HDR and its well-judged exposures. Even in dimly lit environments, photographs looked remarkably detailed with barely a whiff of visible noise. 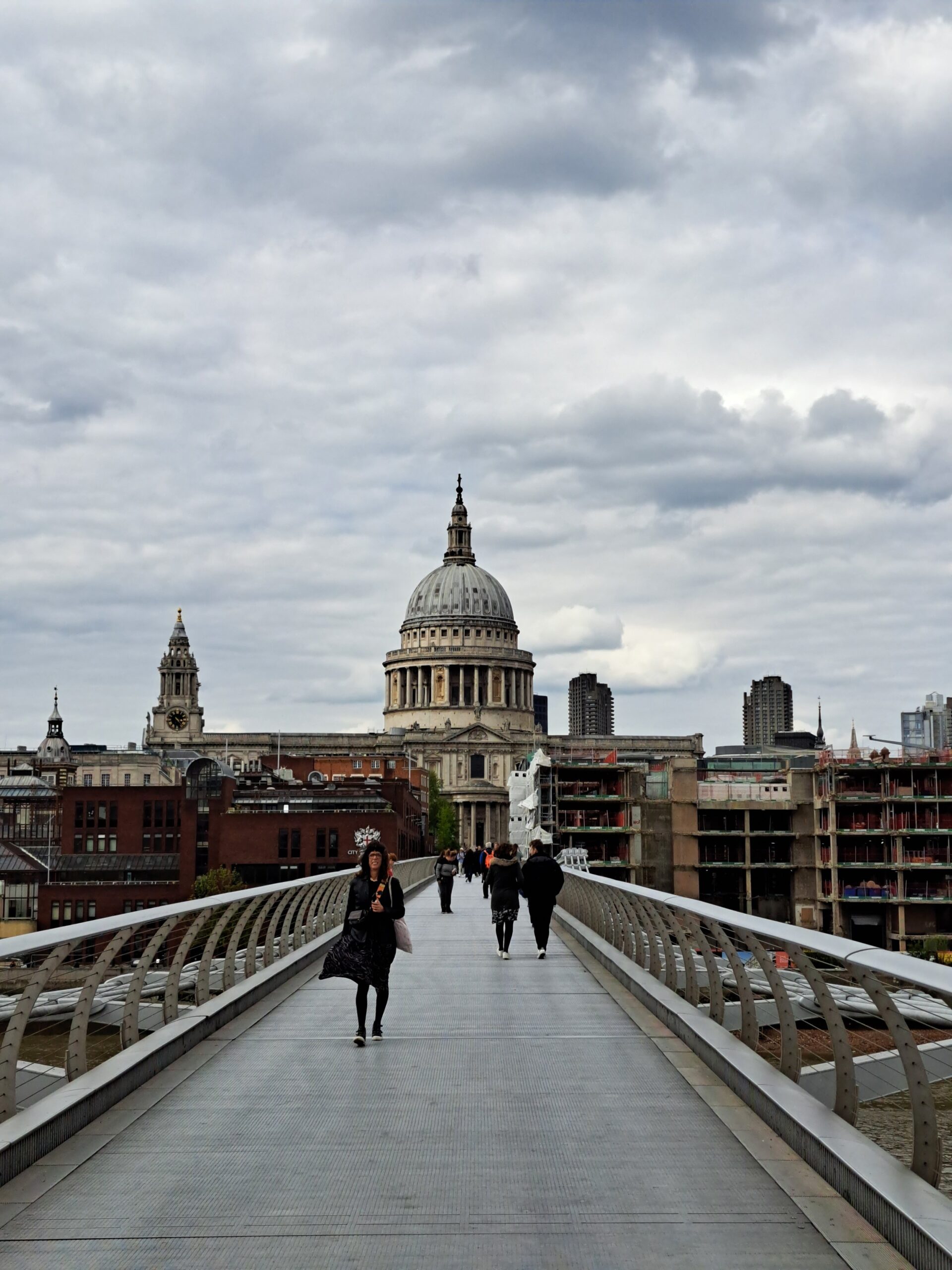 Portrait images are among the best I’ve seen on a phone at this price, with crisp outlines around subjects and effectively blurred backgrounds. The only thing I didn’t like – and this is an issue that plagues all Samsung phones – is that colours are a bit too saturated for my taste. 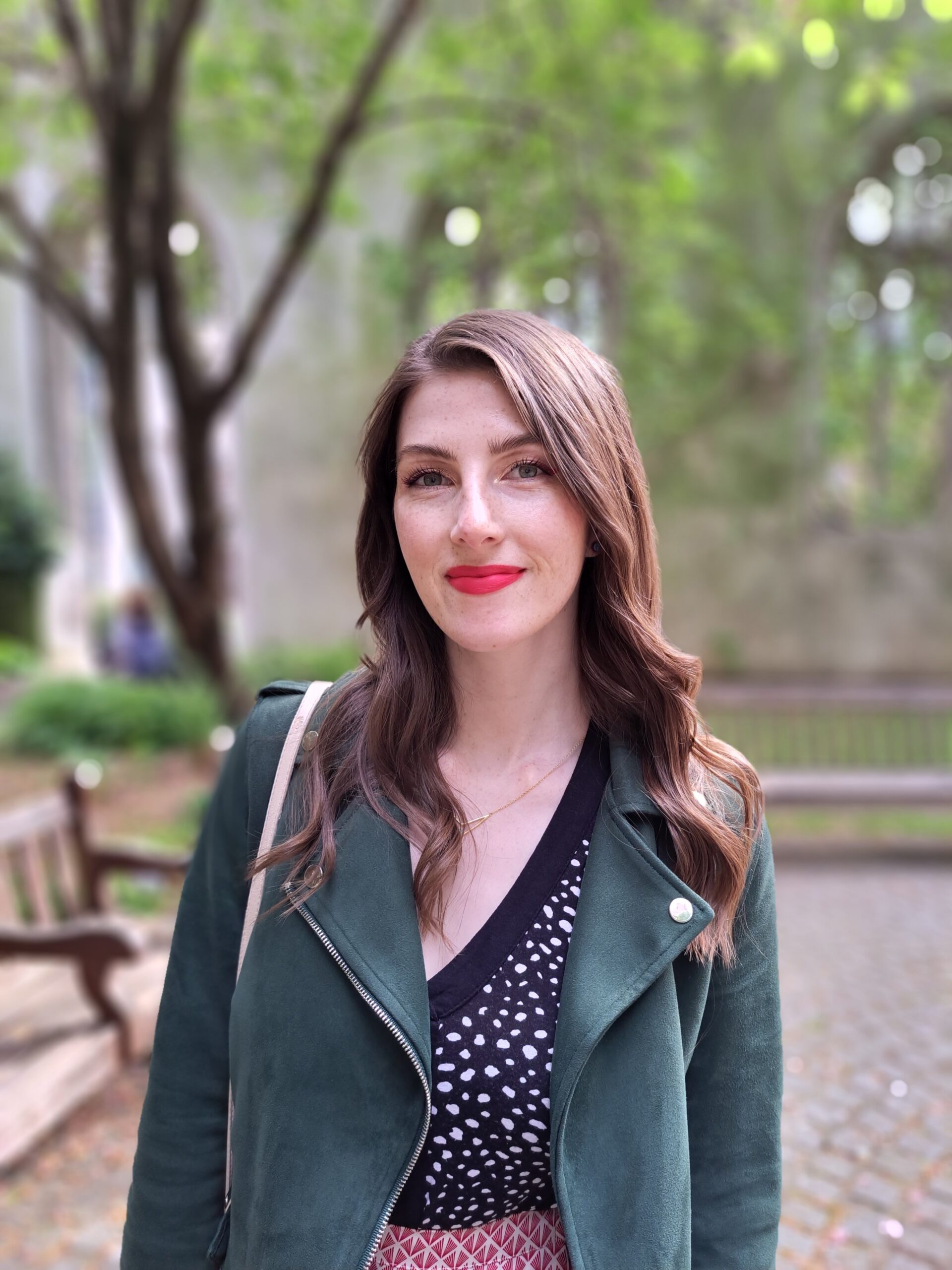 The phone’s ultra wide images are also a bit weak. The benefit of squeezing more stuff in the frame comes with the caveat of an increase in grain and a noticeable loss of detail. There’s also a 2x zoom toggle but this is purely digital and doesn’t offer much in the way of magnification.

Thankfully, video capture is excellent. Footage is capped at 4K resolution at 30fps – you have to enable 1080p if you want a smoother 60fps frame rate – and it looks great, with largely shake-free panning.

The Galaxy A53 5G is a remarkably well-rounded rival to this year’s high-priced flagships. If your sights are set on the Galaxy S22 but you don’t have the funds required to buy one, then the A53 5G is every bit the next best thing.

It simply brings so much to the table that I’d be mad not to give the Galaxy A53 5G a Best Buy award. It’s not perfect but, at this price, nothing ever is and, besides, it gets pretty darn close.