With active noise cancellation and a more compact, comfortable design, the Galaxy Buds 2 are a clear upgrade on the Buds and Buds Plus

The Samsung Galaxy Buds 2 are the fourth pair of Samsung earbuds I’ve reviewed since joining Expert Reviews in December 2019. That’s not me showing off, I simply want to put into perspective how keen the company is to grow its true wireless offering.

The original Samsung Galaxy Buds first launched alongside the Galaxy S10 more than two years ago and we’ve since seen the Galaxy Buds Plus, Buds Live and, most recently, the Buds Pro. The Galaxy Buds 2 replace the original Buds and Buds Plus in the company’s earbuds lineup, taking the mantle of its entry-level option, though they’re not exactly cheap at £139.

There’s plenty to like about the Galaxy Buds 2 – particularly their comfy fit and active noise cancellation – and they’re certainly a better overall package than the earbuds they intend to replace. However, are they worth your money or should you save up some extra cash for the Pro model instead? Samsung Galaxy Buds 2 review: What do you get for the money?

For your £139, you’ll be getting a pair of Bluetooth 5.2 earbuds that support the use of the SBC and AAC codecs in addition to Samsung’s proprietary audio codec, Scalable.

The pebble-shaped buds weigh approximately 5g each, making them Samsung’s lightest buds yet, and are available in four colours: white, graphite, olive and lavender. They’re secured in your ears via silicone tips and Samsung supplies three different-sized pairs to help you achieve a snug fit. If you’re struggling, an earbud fit test in the Wearable companion app will help you select the right-sized tips.

The accompanying charging case is the same dimensions as the Buds Pro’s at 50 x 50 x 28mm (WDH), and the two also share the ability to be charged wirelessly via a Qi charger or by simply using the included USB-A to USB-C cable.

Stated battery life of the earbuds is up to five hours when active noise cancellation is engaged, with the case providing a further three full charges. That takes total battery life up to around 20 hours, which is actually a couple of hours more than the more expensive Buds Pro.

I’ve seen a fair amount of criticism relating to the Galaxy Buds 2’s design online, with someone comparing them to Mentos and another poking fun at the olive variant, saying they look like a pair of ripe Mediterranean nibbles.

The Buds 2’s appearance clearly isn’t for everyone, but personally, I have no issues with their aesthetic. It may not be particularly exciting, but the form factor is one that matched the contours of my ears supremely well. The Buds 2 are some of the most comfortable earbuds I’ve used and they don’t really protrude outwards. So little, in fact, that I found myself able to fall asleep wearing them, which doesn’t happen often. I’ve praised previous Samsung earbuds for their impressive compatibility with other devices in the Galaxy ecosystem, and the Buds 2 continue that tradition. They don’t offer quite the same range of Galaxy-exclusive features as the Buds Pro, but the handy Auto Switch feature has made its way over from the top-of-the-range model and it works rather well.

When enabled, this automatically swaps your Bluetooth connection between paired devices based on what you’re doing. If you decide that you’ve had enough of listening to a Spotify playlist on your phone, for instance, and then switch to a YouTube video on your tablet, the Buds 2 will immediately switch to playing the audio from the latter.

Owners of the Galaxy Watch 4 can also make use of the Quick Buds Control widget, allowing them to turn ANC on and off and check their buds’ battery life from their wrist. The former functionality feels a little redundant considering the Buds 2 offer the same option via touch controls, but the latter is more useful.

Touch controls are simple but effective and although customisation is limited, you can assign practically all of the earbuds’ functions to touch commands, which is great. Customisation is handled via the Galaxy Wearable app, which isn’t available on the Apple App Store, meaning iOS owners will want to steer clear of the Buds 2.

By default, a single tap on either earbud resumes or pauses your audio, a double tap plays the next track and a triple tap plays the previous track. These controls can’t be changed but you can alter what happens when touching and holding the left and right buds. Should you wish, you can use this action to switch between ANC and ambient sound modes, hail your voice assistant, increase or decrease volume or immediately launch Spotify.

Sonically, the Buds 2 will appeal to those that enjoy a healthy dollop of bass with their music. The default sound profile delivers plenty of weight in the low-end frequencies, resulting in punchy basslines on a Drum and Bass Classics playlist on Spotify. The Buds 2 definitely deliver mainstream-friendly audio, which is clearly what Samsung wants from its most affordable earbuds.

Like their predecessors, the Buds 2 have five EQ options at their disposal: bass boost, soft, dynamic, clear and treble boost. They all work reasonably well, though I’d like to see Samsung offer more granular EQ customisation and the ability to create your own EQs. An area where you’re given comprehensive customisation options is in the ambient sound mode. Hidden away under the Accessibility tab in the Wearable app are a range of options that provide control over how much external noise makes its way to your ears with the mode engaged.

You can tweak the level of ambient sound that comes through the left and right earbuds individually and can also choose whether you want external sounds presented softly or clearly. By cranking the settings to maximum I found the Buds 2 to be pretty effective at keeping me aware of what was going on around me. Ambient sound can also be toggled on during phone calls, which is useful.

Samsung Galaxy Buds 2 review: What could be better?

Although they handle bass well, the Galaxy Buds 2 don’t offer the same level of clarity in the mid-range as the Buds Pro. That’s perhaps to be expected given the price difference and likely reflects the target markets: these are buds designed for the mass market rather than more discerning listeners among Samsung’s consumer base.

While not terrible, the Galaxy Buds 2’s noise cancellation could certainly be improved. Samsung’s Buds Pro lag some way behind the likes of Sony and Bose and unfortunately, the Buds 2 aren’t any different. Dampening low-end frequencies to a point, sound is never attenuated to a level where you can achieve true immersion in what you’re listening to in noisy environments. 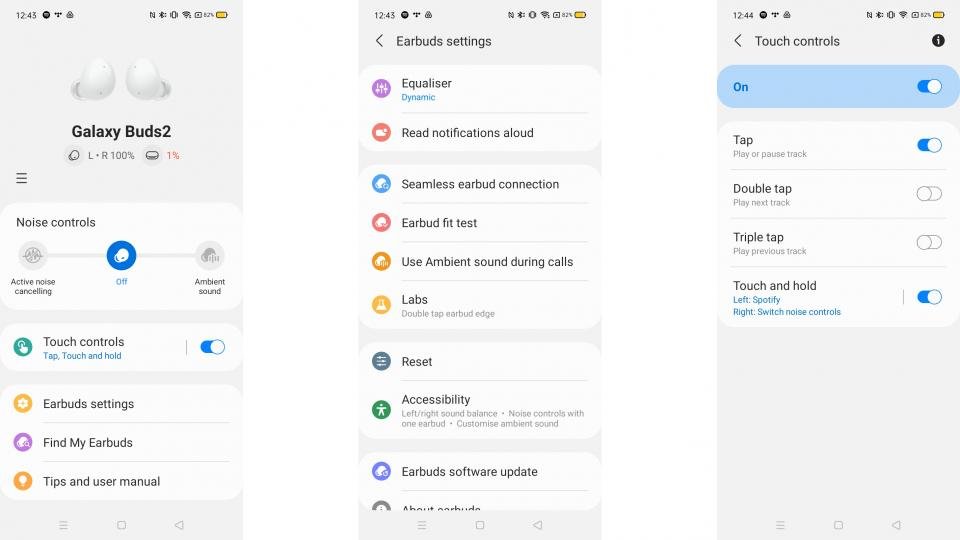 Battery life also disappoints when compared with some of the competition. With the OnePlus Buds Pro offering 28 hours of audio for the same money, the Galaxy Buds 2’s 20 hours feels rather meagre. The Buds 2 handle auto-pausing in an inferior manner, too. They’ll only pause audio when both buds are removed from your ears, and frustratingly don’t resume when put back in. When you’ve become as accustomed to wear-detection as I have, the absence of fully functioning auto-pause/play tech is felt keenly.

One of the biggest discrepancies between the Buds Pro and Buds 2 is their IP rating for water resistance. The Buds Pro are IPX7 rated, meaning they’re cut out for just about any situation save a swim, while the Buds 2 only offer IPX2 protection. That certifies them safe from water splashes from certain directions but won’t provide the same level of peace of mind as their pricier siblings.

Samsung Galaxy Buds 2 review: Should you buy them?

Samsung’s latest earbuds are undoubtedly a step up from both the Galaxy Buds and Galaxy Buds Plus. Active noise cancellation could be more effective but is a welcome inclusion, and the Buds 2 deliver bass-rich audio likely to please mainstream consumers.

Handy Galaxy-specific features within the comprehensive Wearable companion app make the Buds 2 a fine choice for Samsung smartphone owners, and they have a slight edge over the Buds Pro in terms of fit and battery life.

However, the Buds Pro sound slightly better, offer a more comprehensive suite of advanced features and have a superior rating for water resistance. They’re also regularly discounted from their list price of £219. So, if you can pick up a pair for the £140 at which they were available at the time of writing, I suggest you do that rather than buying the Buds 2.